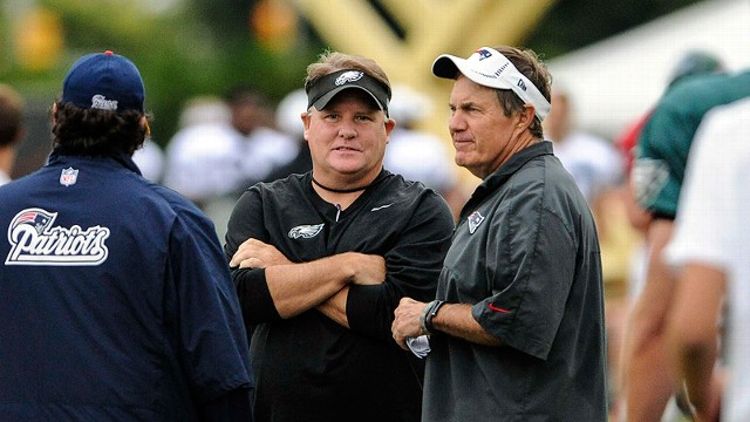 By last year, we’d already known that Chip Kelly’s influence had made its way to New England. As Greg Bedard laid out in his great Boston Globe story from last season, the Patriots’ coaching staff was enamored of Kelly’s philosophies when he visited the team a couple years back while still the head coach at Oregon. With Kelly now in the NFL, Bill Belichick’s latest unabashed pro football bromance can now be fully realized.

The Patriots have been doing joint practices for years (with the Saints and fellow NFL Mastermind Club member Sean Payton involved more than once), and it’s no surprise that Belichick would jump at the chance to have Kelly involved. “I’ve had several conversations with him since he’s taken over here in Philadelphia — owners meetings, Combine, phone conversations, things like that,” Belichick said, according to CSNPhilly.com’s Reuben Frank. I just think he’s a really solid coach and a solid guy. I’ve always had a lot of respect for him and I think he does a great job with his team.” Belichick has had his share of football crushes, most notably Larry Fitzgerald and Ed Reed, but there’s a strong chance the one with Kelly will reach new heights. “He’s a very innovative, creative guy,” Belichick said. “He’s got a great mind, he’s smart, and I think he’ll take advantage of whatever resources he can. We’ll see what that is. I’m sure he’ll give us plenty of trouble.”

In all seriousness, though, that last part is the reason it’s not an accident that that Patriots have been the class of the AFC for the past decade. Belichick’s classically closed-off public approach is in direct contrast to the approach taken inside the Patriots organization. The Patriot Way is great and everything, but the reason New England has been successful (aside from having Tom Brady) is that Belichick has always been open to new ways of working. By inviting Kelly to camp for a few days, the Pats are likely to see the type of offense with which they and their coaching staff are unfamiliar. There’s a good chance that Kelly — an information hoarder after Belichick’s own heart — won’t show Belichick and his crew anything he doesn’t want them to see, but like it normally is, the Hoodie’s idea here is right. For now, I’m just going to sit back and enjoy the weeklong back and forth of glowing quotes and nonstop admiration. These two deserve each other.