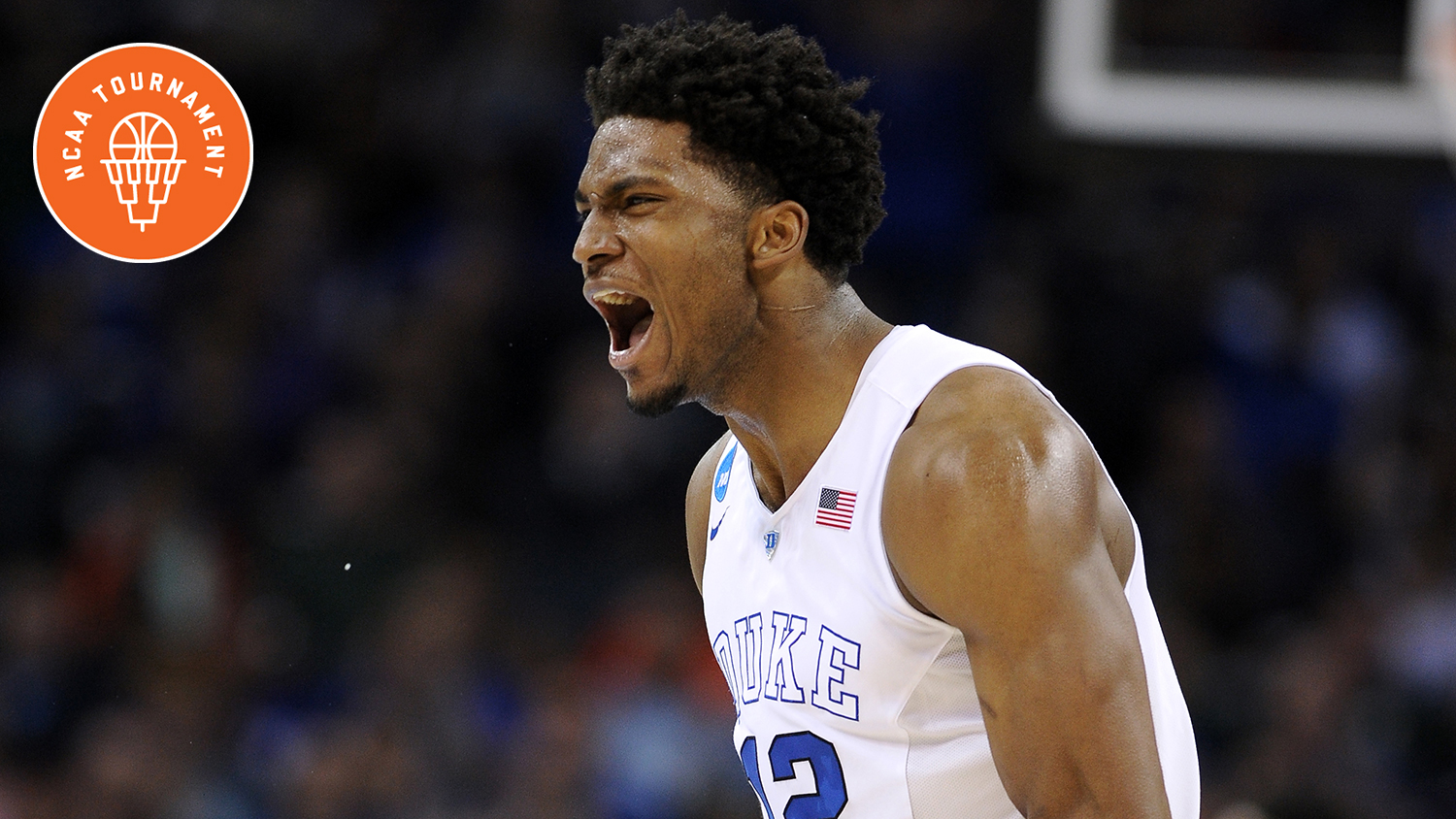 Jahlil Okafor is 6-foot-11 and 270 pounds. He has catcher’s mitts for hands, and a Barkley-size ass. His footwork has the polish of a 10-year pro, and he’s quick enough to explode into spin moves around defenders and finish with either hand. On a college basketball floor, Okafor looks like a varsity player surrounded by eighth graders. And all of that is why it’s amazing that watching Duke right now means blurting out, “Forget about Okafor, what about THAT GUY?”

That guy is Justise Winslow.

All the Grantland coverage of the 2015 NCAA tournament, right here.
He isn’t bigger than everyone else on the court, he’s barely polished, and it doesn’t matter. He’s the guy you can’t stop watching. I talked about him in the NBA draft notes last week, but before the Final Four picks up again this weekend, I think we need to go a little deeper here.

First of all, Winslow is the reason Duke is in the Final Four. We know that, right? In the Sweet 16, he delivered the knockout punch (21 points, 10 rebounds) when Utah was threatening to make a comeback in the second half. On Sunday it was the same thing. Gonzaga had a chance to tie the game at 53, with just under five minutes left. But Kyle Wiltjer missed a layup for the tie, and then Winslow went to work.

He attacked the rim and got fouled, draining two free throws. On the next possession, Tyus Jones missed a 3, but Winslow got the rebound and drew a foul on the putback. Two more free throws. Next possession: Winslow grabbed the board on defense, jab-stepped into the defense on the other end, and drained a 3. Seven straight points meant a two-point lead turned into nine. The game was pretty much over at that point.

It’s not a knock on the other Blue Devils to say that Winslow is the reason Duke is in the Final Four. Okafor is great, and even when he’s not dominating, he demands so much attention that it frees up his teammates. Tyus Jones is one of the most fearless freshman point guards I’ve ever seen, and he just destroyed Kevin Pangos on Sunday. Even role players like Matt Jones have stepped up.

But Winslow is the piece that’s been missing from Duke teams the past few years. Even as Coach K modernized his recruiting to add more superstars, he hasn’t had anybody with this kind of edge. Austin Rivers was fine and Jabari Parker was fun, but they didn’t bully people into submission. Okafor’s post game is beautiful, but nothing about him ever feels brutal. With Winslow, it’s different.

He overpowers big men for rebounds. His blocks demoralize people on defense. He careens through the lane in transition. The whole thing just looks exhausting for anyone stuck defending him. It’s like teams spend entire games guarding everyone else on the floor, and then look up and say, “We have to deal with THIS?”

Now he’s even hitting jumpers. He shot 40 percent from 3 during the regular season, and he is 7-12 from beyond the arc in the tournament. That jumper could make his NBA future a lot more interesting. And that’s the other part of this conversation. 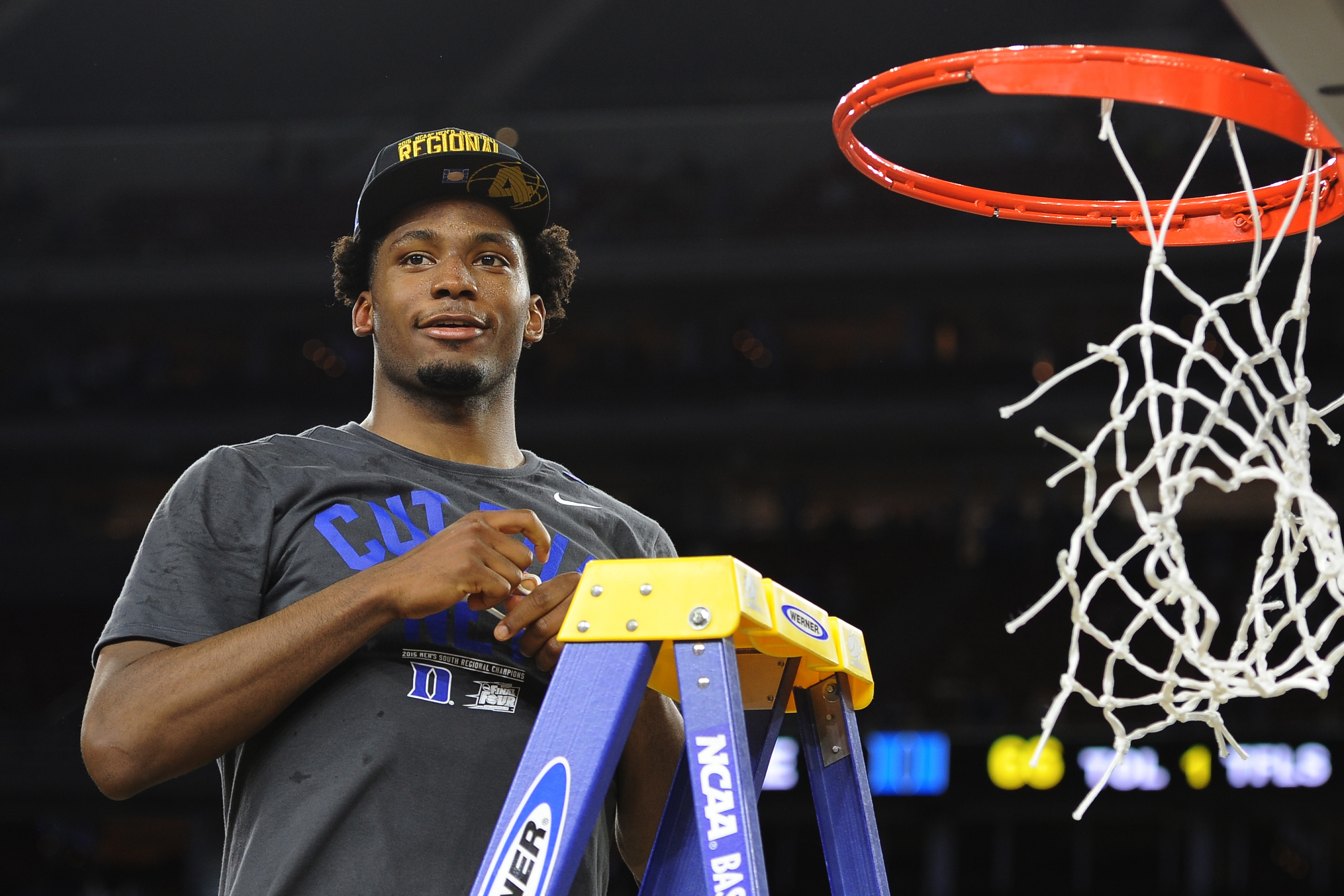 There are two ways to look at Winslow’s NBA future. You can definitely make the case that he’s a top-three pick. On Monday, our college hoops savant Mark Titus wanted to know why he couldn’t go no. 1.

The question makes sense. Okafor has been considered for the no. 1 pick all year, but Winslow has been better all tournament. He has fewer questions marks than his All-American teammate and just as much as upside. As the NBA places more and more value on defense, Winslow is a guy who can guard anyone on the perimeter. Within a few years in the NBA, he could be one of the best all-around wings in the league. He’s raw as a scorer, but his shooting form is fine — unlike, say, Michael Kidd-Gilchrist’s — and in addition to dominating people in transition, there’s no reason to think he can’t turn into a dependable 3-point shooter. He is a future Jimmy Butler or Kawhi Leonard. He could definitely be one of the best players on a playoff team.

I think I’m on the other side of the “top pick” debate, though. Part of this selfish. I don’t want to see Winslow shackled with the expectations that come with going that high. He would be more fun as a secondary star than a franchise savior (who can’t totally dribble yet).

No matter how great he’s looked over the past few weeks, the NBA will be a tough adjustment. He will still have an athletic advantage over almost everyone, but it won’t be as dramatic as it’s been the past few weeks. Even if he eventually settles into the Kawhi role, he won’t be overpowering teams by himself. There’s an outside chance that he improves every piece of his offense and keeps his outer-space athleticism — in other words, he turns into Russell Westbrook as a small forward — but predicting a Westbrook trajectory is as ridiculous as calling someone the next Jordan.

The real question is what you want from a top-three pick. Do you play it safe and go with a guy who could definitely be the second- or third-best player on a title team? Or do you gamble and hope for someone who could carry a team one day? Winslow should be awesome in the NBA, but fitting that second criterion is probably a stretch.

His handle is still pretty balky, and his scoring in the half court never looks completely natural. Some of that will get better, but will it ever add up to a player who’s taking over the fourth quarter of playoff games? The best scorers are born, not developed. That’s why I would still take someone like D’Angelo Russell before Winslow. The NBA may value defense now more than ever, but drafting for defense might not be the smartest play. Offense will always be more valuable. You can find a Trevor Ariza or Corey Brewer every single year. Finding James Harden happens once a decade.

All of that is beside the point this week, though. In college, this weekend, this is the dude:

Last week, I wrote that the best thing I can say about Winslow is that every time he steps on the court, I’m worried he’s going to hurt someone. That isn’t true anymore. I’ve despised Duke with all my heart for my entire life. And the best thing I can say about Justise Winslow is that he had me rooting for Duke to make the Final Four this weekend. Watching this is too much fun.

He just turned 19, and we’re seeing him grow into his game in real time. Every month, he’s gotten a little bit better. March was the meanest display yet. Now it’s April, and we’re still going.

As complicated as the NBA question gets, college is simple. Winslow is being unleashed on guys who are half as strong and nowhere near as explosive. How do you stop a grizzly bear?

I have no idea. That’s Michigan State’s problem now.

Everybody else can just watch him eat.