23-Day NFL Warning: Why an Early Heath Miller Return Is Vital for the Steelers 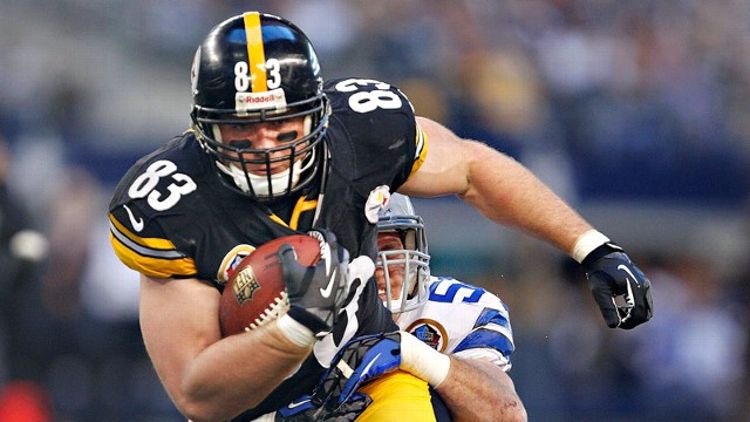 Sifting through the latest collection of horrible injury news from this morning, there was one headline that’s cause for (at least some) celebration. Gerry Dulac of the Pittsburgh Post-Gazette reported that it’s possible the Steelers will activate Heath Miller, who tore his ACL near the end of last season, from the physically unable to perform list before Week 1. This is particularly welcome news for Steelers fans considering what happened earlier this week, when current starting tight end Matt Spaeth went down with a foot injury that is likely to keep him sidelined for eight to 10 weeks.

Behind Spaeth (who’s in his second stint with the Steelers and is very useful as a blocking tight end but limited as a receiver) is David Paulson, a seventh-round pick from a year ago who caught just seven passes as a rookie. Activating Miller before the season begins doesn’t necessarily mean that he’ll be ready for Week 1 (it’s very unlikely that he will be). But because players must miss the first six weeks, including practices, if they start the season on the PUP list, activating Miller to get him practice reps — and with the chance he’s ready a bit early — seems like the smart choice.

Drafted in the first round eight years ago (it’s really been eight years; I couldn’t believe that, either), Miller has quietly been an important part of the Steelers’ offense for a long time. He’s consistently been one of the better blocking tight ends in the league, and last season, his 71 catches for 816 yards and eight touchdowns made for the best year of his career as a receiver.

The news that Miller may return before Week 7 is important because his role in Pittsburgh’s offense figures to be more substantial than it’s ever been he when he’s back. Mike Wallace is gone to Miami, Plaxico Burress is out for the year, and Jerricho Cotchery seemed old when he came into the league. Pittsburgh’s top two receiving options are Antonio Brown and Emmanuel Sanders, neither of whom has been tasked with the role of being a primary receiver at this level.

Even with Miller, the Steelers’ offensive game plan was likely to include a stronger dedication to the running game than in the previous few seasons. Pittsburgh spent second-round pick on Michigan State’s Le’Veon Bell, and all the news out of Steelers camp is that Bell has looked every bit the part of a starting running back. The unit blocking for him also seems set to improve. Pittsburgh’s first-round pick from a year ago, guard David DeCastro, suffered a gruesome preseason knee injury that cost him the majority of his rookie season, and the team’s second-pick, offensive tackle Mike Adams, missed significant time as well.

DeCastro has also garnered great reviews during camp, and despite being the victim of a stabbing this offseason, Adams should be ready to go as well. Finding reliable pieces on the offensive line has been a struggle for seemingly all of Ben Roethlisberger’s tenure in Pittsburgh, but even if DeCastro and Adams are the answer, there are still a lot of moving parts on an offense that wasn’t exactly dominant a year ago. Getting Miller back early in the season will go a long way in helping stabilize Pittsburgh’s offense and give Roethlisberger one more piece he knows he can lean on.

The All-22 All-Star Team: Dwayne Allen, the Colts' Other Tight End