Our worries were completely misguided! Behind a historic and unbelievable 16-minute blitz and Carli Lloyd’s sudden ascension into heaven, the United States women’s national team got a second dose of revenge against Japan with a 5-2 victory in the 2015 World Cup final. As Nike works on stitching in more stars, here’s a look at the six key figures behind the USWNT’s third World Cup title in seven tries. 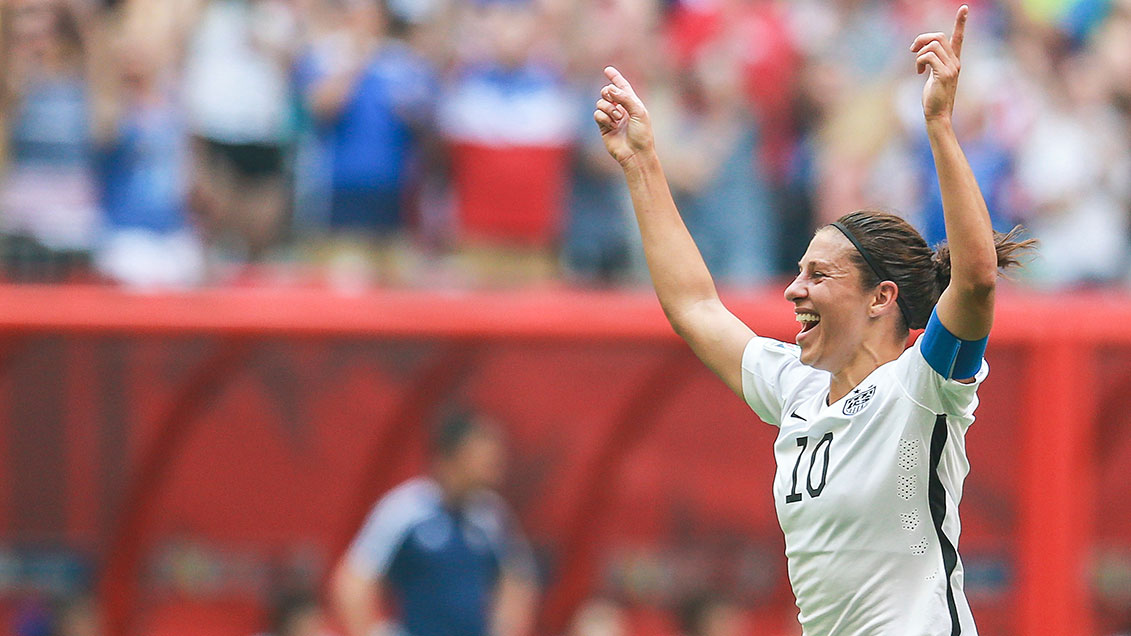 Mike L. Goodman: Carli Lloyd finally gets to have her moment in the sun. At 32, after a career littered with some of the most clutch goals you will ever see, including two Olympic gold-medal winners, it’s amazing that it took this long. But when it comes to women’s soccer, which has historically been an afterthought for 46 out of 48 months every World Cup cycle, there have been only so many column inches to go around. She wasn’t the face of the franchise like Abby Wambach, or the marketable one like Alex Morgan, or the cool one like Megan Rapinoe. She wasn’t even the edgy and troubled one like Hope Solo. She was “just” the weird, frustrating, clutch athlete.

There are certainly sociological dissertations galore to be written about “frustrating but clutch athlete” somehow ranking way down the list of story lines for members of the USWNT, but thankfully, on the back of an absurd evening, Lloyd’s the story of this World Cup after all. Some performances simply won’t be denied, and a hat trick in 16 minutes, including a ridiculous bomb from the halfway line, certainly ranks way up there. It’s too early to say whether this World Cup will have the effect many women’s soccer fans hope it will. The last 15 years are riddled with failed attempts to translate the once-every-four-year interest in the game to a sustained professional league model. Who knows whether the current league, the NWSL, will reap the benefits of this performance. But if it does, if on some level, women’s soccer becomes just a little more noticeable during those 46 months of non–World Cup time, well, that just makes Lloyd’s moment all the more fitting. But let’s be real: Lloyd is now a Golden Ball winner and a World Cup champion. That should be more than enough. 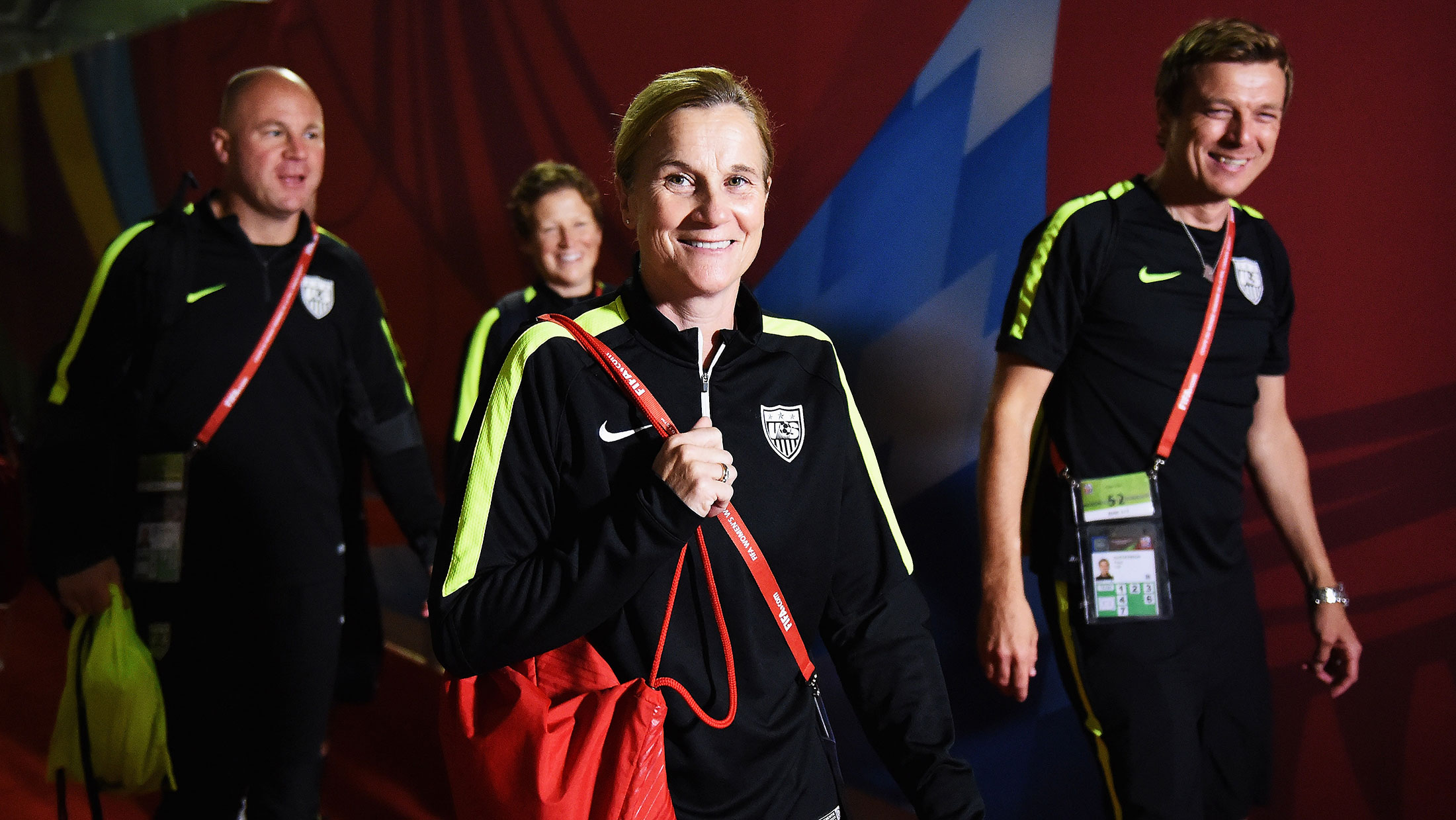 Noah Davis: About 30 seconds after Lloyd scored the first of her three goals, the television camera cut to United States coach Jill Ellis. As she sat on the bench, a small smile crept across her face. She reached out and tugged on the pant leg of one of her assistant coaches. It looked as though she knew a secret. Considering that Lloyd’s goal came courtesy of a Megan Rapinoe corner kick that very much looked like a training ground play, you have to think she did. Ellis or one of her staff saw a weakness in Japan’s set piece defending, which has been spotty all tournament long, and developed a play specifically to attack that vulnerability. It worked: Lloyd scored, Ellis smiled knowingly, and the Americans had an early lead they wouldn’t surrender.

Ellis didn’t get all the decisions right in Canada but, like her team, she improved as the tournament progressed and was damn near perfect over the final two matches. She inserted Morgan Brian into the starting lineup; put Tobin Heath out wide, where she finally found a rhythm; and, most importantly and impressively, benched Abby Wambach (despite what other morons said). She pointed a way forward while simultaneously doing what no other American coach had managed to do for more than a decade and a half: win the World Cup.

The U.S. prevailed in Canada because the back line didn’t bend until it didn’t matter anymore, because the attack found itself, and because Lloyd decided she was the best player in the world. But it wouldn’t have gotten far without Ellis sitting back and setting it all up. 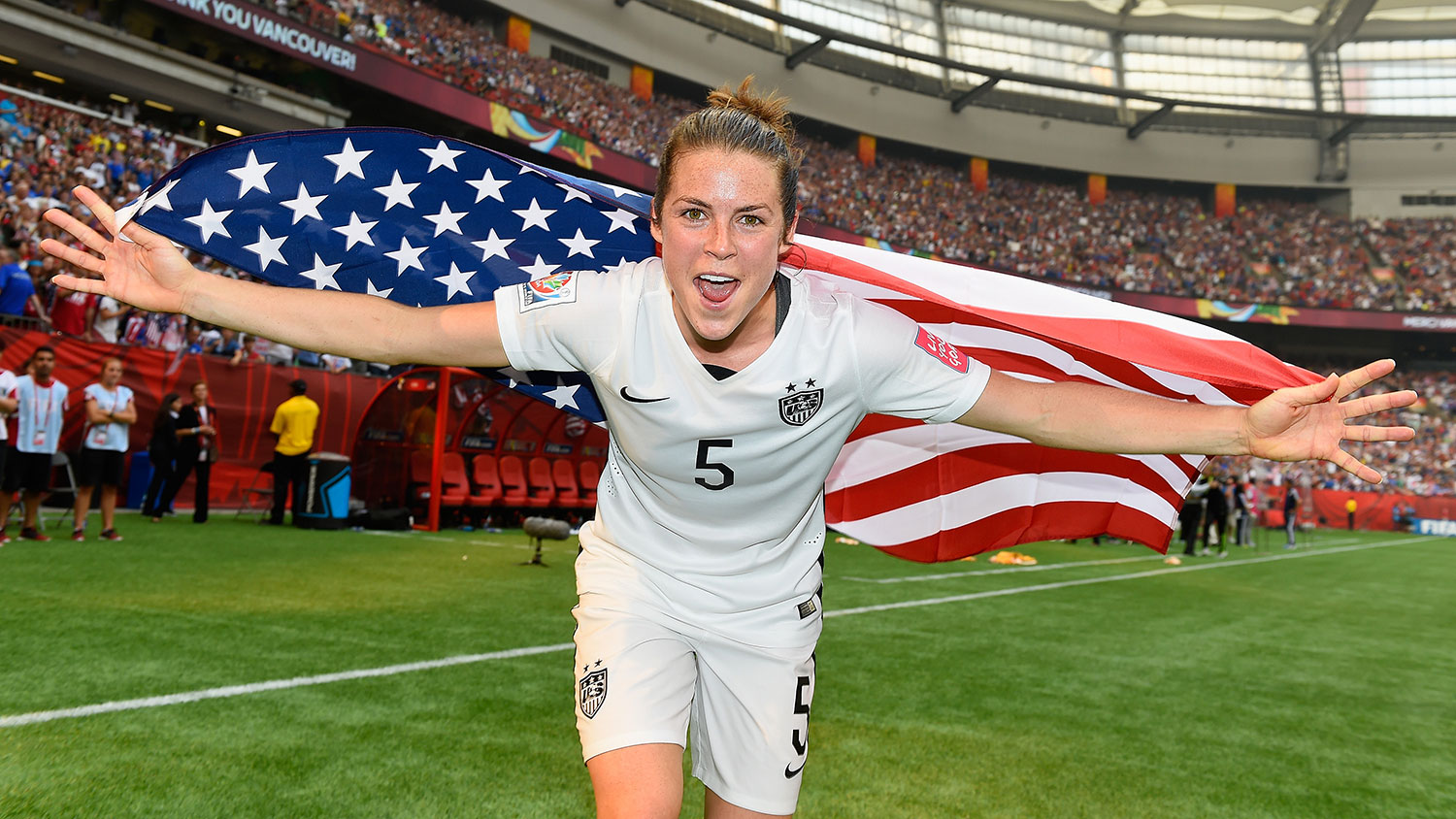 Allison McCann:1 What if your ass never left the bench for four straight games, for roughly 360 minutes of watching and cheering and hoping your time will come? And what if, before that, in the last major tournament, you played every minute of every game before having a gold medal draped over your neck? Enter Kelley O’Hara, the 2015 World Cup super-sub extraordinaire who everyone thought had vanished after her Olympic glory until an appearance against China and a ninja-kick goal against Germany. Over the last week or so, she proved that she’s one of the best forwards turned defenders turned wingers in the world.

Full disclosure: Allison was teammates with O’Hara at Stanford.

O’Hara is accustomed to the runaround. She was cut from the 2011 World Cup squad before an injury called her back up. In 2012, she was groomed to be an outside back despite being one of the most prolific scorers in college, and she played the entire Olympics en route to the U.S.’s victory in the final over Japan. But ankle surgery in 2013 and the shuffling of head coaches left her in limbo for much of the past two years; she was no longer a forward, but not quite a defender, either. Ellis sat O’Hara for all of the group-stage games and in the round of 16 against Colombia, but the U.S. struggled, and seemingly out of nowhere she started the quarterfinal game against China. She kept the width well and went at players before smashing her face on the back of a defender’s head and exiting the game with a bloody nose. But she was back again in the 75th minute of the semifinal against Germany: a stutter step by Lloyd and — WAS THAT KELLEY?! — a leg flying into the 6-yard box and a game-clinching goal. With the game already wrapped up after the first 16 minutes, her appearance in the final wasn’t quite as decisive, but she’d already done enough to help the Americans get there in the first place. 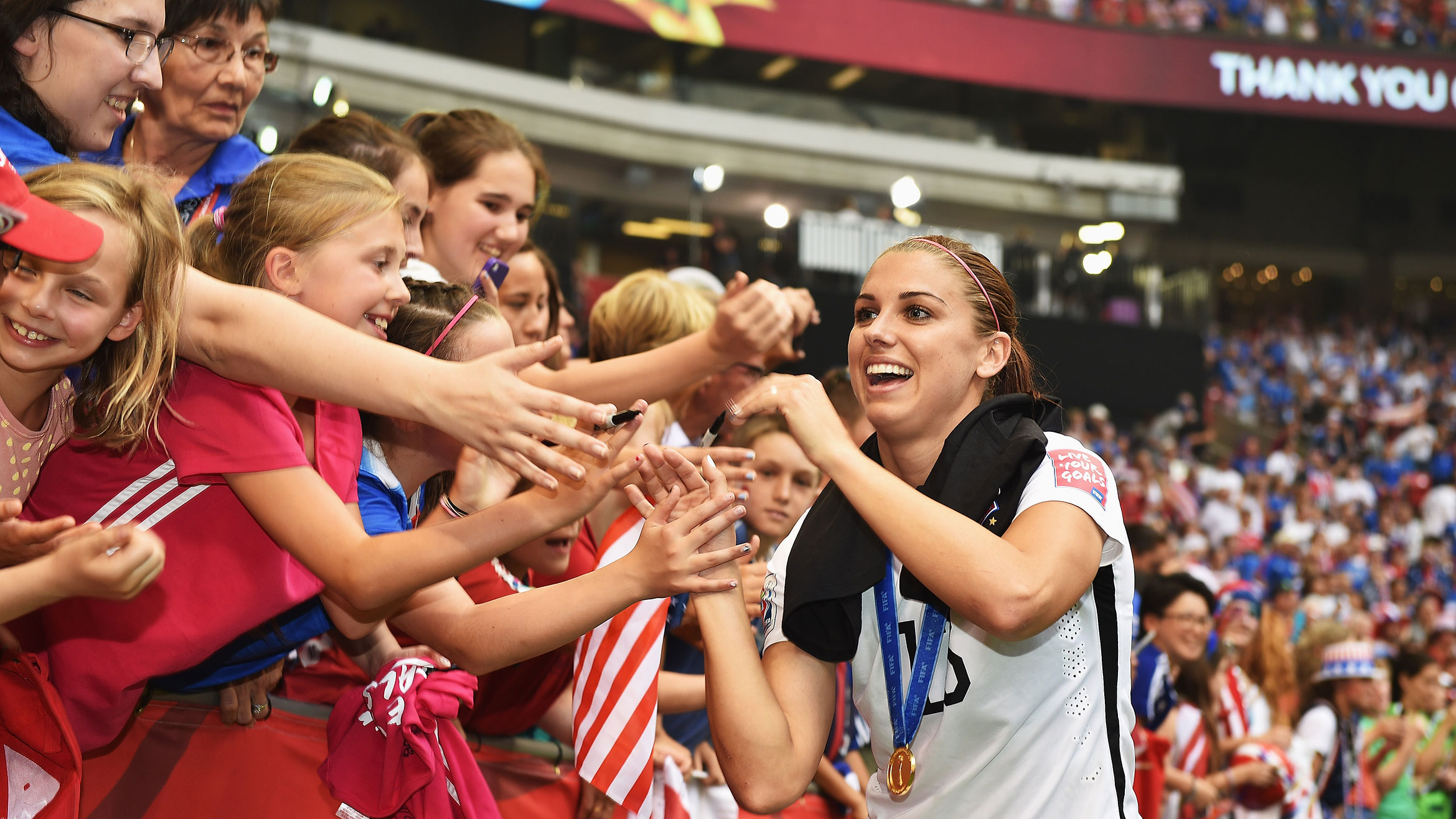 Goodman: For the last two USWNT matches of the World Cup, four different forwards started the game on the bench. Wambach, Christen Press, Amy Rodriguez, and Sydney Leroux were all riding the pine while Alex Morgan played as a lone striker. Maybe that shouldn’t be surprising: Morgan, after all, is a star. In Montreal, during the week before the U.S. faced Germany in the semifinals, Morgan jerseys were everywhere, far outnumbering anybody else. There were more Morgan jerseys in the stadium for the quarterfinal matchup between France and Germany than there were shirts of the two teams playing the actual match — and it wasn’t particularly close.

Yet when Morgan was handed the keys to the front line, she wasn’t asked to be a star; she was asked to do the dirty work. For most of her national team career, she’s been the lightning to the revolutionary physicality of Wambach’s thunderous headers. Wambach battered defenses and gave Morgan the room to embarrass them with speed, skill, and goals galore. But with Wambach past her prime and Morgan struggling to regain her full explosiveness after a knee injury, that plan simply didn’t work anymore. So against Germany and Japan, it was Morgan who had to sacrifice her flash at the altar of industry.

She spent the semifinal and final jumping for headers, running the channels, and holding up the ball around the halfway line as wingers and midfielders made runs beyond her. She was the one moving side to side, dragging defenders out of position so others could have the glory and the goals. Without Morgan, the U.S. resurgence over the final three games wouldn’t have happened. She came into this tournament a star, and her willingness to sacrifice and adapt her game is a huge part of why she and her teammates are leaving it as champions. 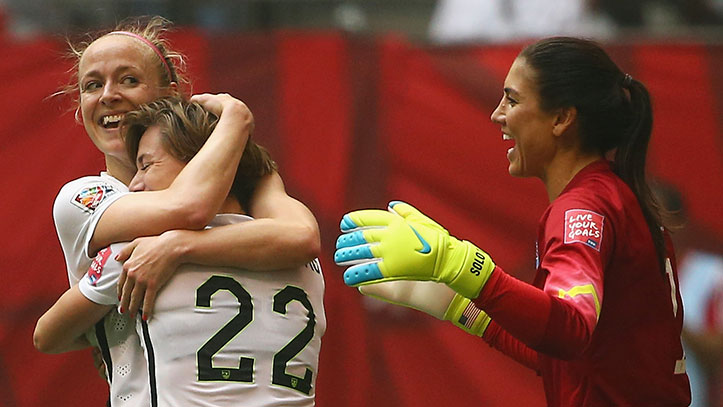 Davis: A funny thing happened among the media during the days between the USWNT’s semifinal win over Germany and Sunday’s final: Everyone collectively decided that Becky Sauerbrunn, not Julie Johnston, was the key to the Americans’ impressive defensive performance. The latter, an untested 23-year-old center back who was a wild card coming into the tournament, had been getting the headlines, her blonde ponytail gracefully bouncing up and down as she made yet another sliding challenge, but suddenly it was the rock-solid yet totally unheralded 30-year-old from St. Louis who was in the news. There was a minor revolt when Sauerbrunn didn’t make the short list for the Golden Ball, given to the World Cup’s best player, but Johnston did.2

Sauerbrunn, who has an excellent sense of humor, sounded miffed but hardly devastated by the slight. You get the impression that she’s used to being overlooked, like she’d be perfectly fine to play a game, keep a shutout, and not hear her name mentioned once. Her smart positioning, ability to read the field, and intelligent first step allowed Johnston to perform the more visible heroics. When and if things went wrong, she knew her partner was behind her, cleaning up the mess.

The American team spent most of the first three weeks of the tournament watching its offense grind the gears, doing just enough to get results but never making it look easy. The back line — Sauerbrunn, Johnston, Ali Krieger, and Meghan Klingenberg — and goalkeeper Solo kept a near-record shutout streak, allowing Ellis to tinker and the attack to coalesce. It finally did in the final, producing fireworks. Sixty yards behind the play, Sauerbrunn was ready. 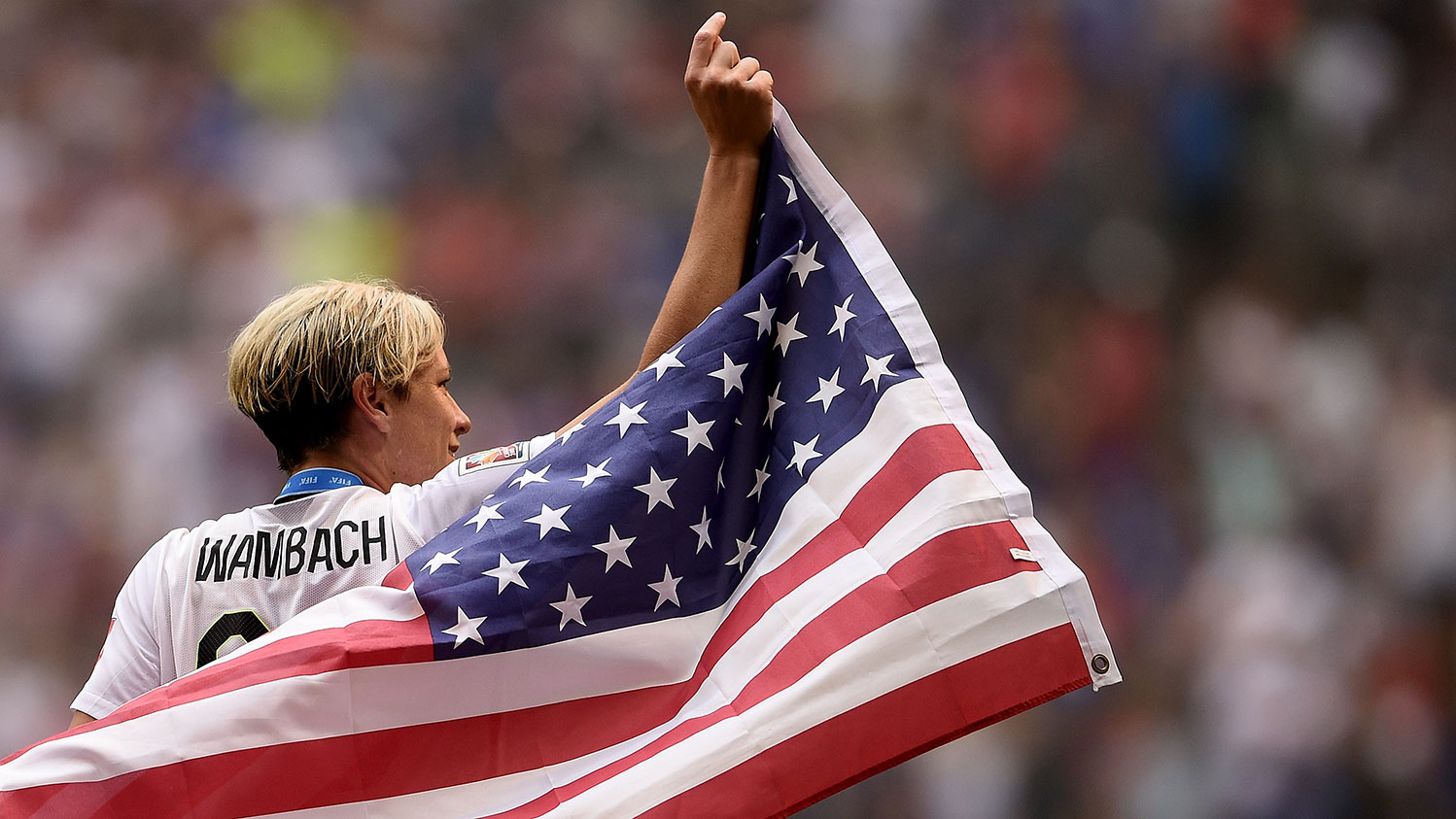 Ryan O’Hanlon: The game was over, and the U.S. just needed to run out the clock, but in the 82nd minute, Wambach got the ball on the right sideline. Japan’s defense was stretched out both by turf-induced exhaustion and the dissolving hopes of overcoming a three-goal deficit. From a certain angle, you could see Wambach’s path to goal — a big touch in toward the box would leave her with just a pair of defenders to beat, and considering the way things went for the Americans yesterday, it seemed like any kind of movement forward would ultimately lead to the ball hitting the back of the net. The blurry outlines of a symbolic moment had begun to form — and then Homare Sawa chopped Wambach down, a foul was called, and we didn’t see another shot on goal before the final whistle.

Yet I think this moment better symbolizes Wambach’s World Cup than any garbage-time goal could ever have.

Even the least tactically inclined American fans know the story by now: The team underachieves through its first four games because of its failure to let go of the past. Then Wambach slides out of the starting 11 and the Americans suddenly shoot the moon and become the best team in the world. We’ll never know for sure how things would’ve gone had she remained in the lineup, but it seems likely, given her outsize presence among everything that happens within the USWNT program, that for success to happen at all, she had to be willing to accept a reduced role.

Transitions are always tricky in international soccer, as teams often hang on to an aging generation for one tournament too long. It’s rare to see a country hit the switch smoothly from cycle to cycle, and rarer still for a team to make the change during the knockout stages of a World Cup. For more than a decade, Wambach, her head, and her 183 goals and 247 appearances kept the U.S. within reach of the trophy. In order to finally get there, though, she had to step out of the way. It might not have been what she wanted, but for the first time since Wambach’s debut 14 years ago, it’s what the team needed.