Polish vs. Potential: Should Amari Cooper or Kevin White Be the First Wide Receiver Drafted? 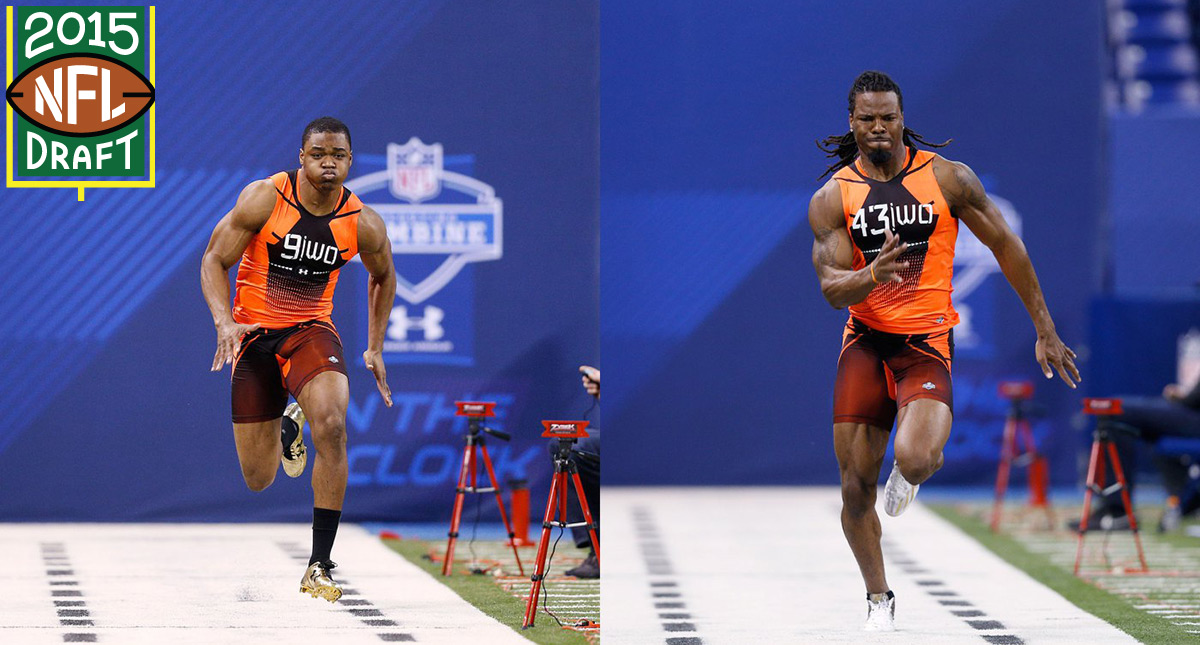 The other position-centric debate in the top 10 of this year’s draft was slower to develop than the one happening between Jameis Winston and Marcus Mariota. At the end of the college football season, it seemed like Amari Cooper would clearly end up the first wide receiver off the board next week. Cooper racked up an absurd 1,727 yards in 2014 as the central offensive option on one of the best teams in the country. The Alabama wideout landing in the top five was supposed to be a sure thing.

Then Kevin White went to the combine.

The Case for White

In 2014, White was no slouch: He finished his second season at West Virginia with 1,447 yards, good for sixth-most in the country. But heads really started to turn when the 6-foot-3, 215-pound receiver tore off a 4.35 in the 40-yard dash in Indianapolis. By now, you’d figure teams would be wary of the big, straight-line fast receiver who helps his draft stock by excelling at activities only kind of related to football. These guys tend to not be able to do things like “catch the football.” And during his first season as a Mountaineer, after playing one season in junior college,1 White certainly struggled with that.

Yet, in White’s tape from 2014, he looks incredibly comfortable catching the ball. Unlike some of the other height-weight-speed prospects who have risen fast in March and April, White is comfortable snagging the ball away from his body and doesn’t cradle many passes. On balls both over the middle and down the sideline, he goes and gets it:

With those ball skills and terrifying top-end speed, there’s a chance White develops into the best deep threat of any receiver in this draft. The question, then, is what else will he be able to do? When given any sort of opening, White’s able to tear up corners who give him space inside, and although he’s a bit slow to get going,2 any ball he hauls in over the middle has a chance to go the distance. On more than one occasion last season, he took a tunnel screen about 40 yards farther than it had any right to go.

There’s no denying how physically imposing this dude is, and we haven’t even mentioned that he did 23 reps of 225 pounds on the bench press. Most of the tight ends didn’t hit that number. Considering all of that, it’s easy to understand why any wide receiver coach would look at White and see a hunk of talent he could mold into a fixture at the Pro Bowl.

The Case for Cooper

The downsides of White just happen to be the upsides of Cooper. In terms of overall polish, White still has plenty of work to do. He played only two years of Division I football — finishing with 144 catches in his career — while Cooper was a three-year starter who came up just 20 catches shy of that number last year. Crediting Cooper’s nuanced ability as a receiver solely to experience would be misguided, though. He’s always been this guy. The 4.42 that Cooper ran at the combine was actually faster than some expected, but he’s not White or DeVante Parker. No, Cooper’s ability to wow has nothing to do with a stopwatch or a tape measure. It comes from being the Platonic ideal of a fundamental wide receiver.

Off the line, he melts ankles. Cooper should gain immediate entry into the Always Open club, joining current members like Antonio Brown, Odell Beckham Jr., and Keenan Allen. He’s a fantastic route runner who gets unbelievable separation at the line of scrimmage.

If you back off and give him some room, Cooper will use that extra space to give defensive backs the sort of whiplash pitchers experience when looking back at a 450-foot home run. I can’t remember seeing a receiver running wide open down the field as often as Cooper did in college.

Looking at Cooper’s combine numbers, it’s obvious he lacks explosion. His 10-yard dash pales in comparison to his respectable 40, his vertical jump of 33 inches puts him in the 16th percentile among wide receivers, and his broad jump isn’t wowing anyone, either. What jumps out is the change of direction — Cooper finished in the 94th percentile in the 20-yard shuttle and the 84th in the three-cone drill — and that makes a lot of sense when you watch the tape. Cooper can stop and start like few guys in this draft, and while that agility makes him a great route runner, it also means he’s a very real threat with the ball in his hands.

When it comes down to it, the choice the Raiders or another team in the top five will have to make is a familiar one: White’s potential versus Cooper’s polish. White has the talent — not just athletically, but also catching the ball — to turn into a player who can burn defenses down. It wouldn’t be the least bit surprising if two years from now, he were Julio Jones. That being said, I think there’s an even better chance that Cooper could be Jordy Nelson from the first day he gets on the field. White’s a big swing, and one that may even have a good chance of connecting, but for my money, I’m taking the guy who can do it all right now.