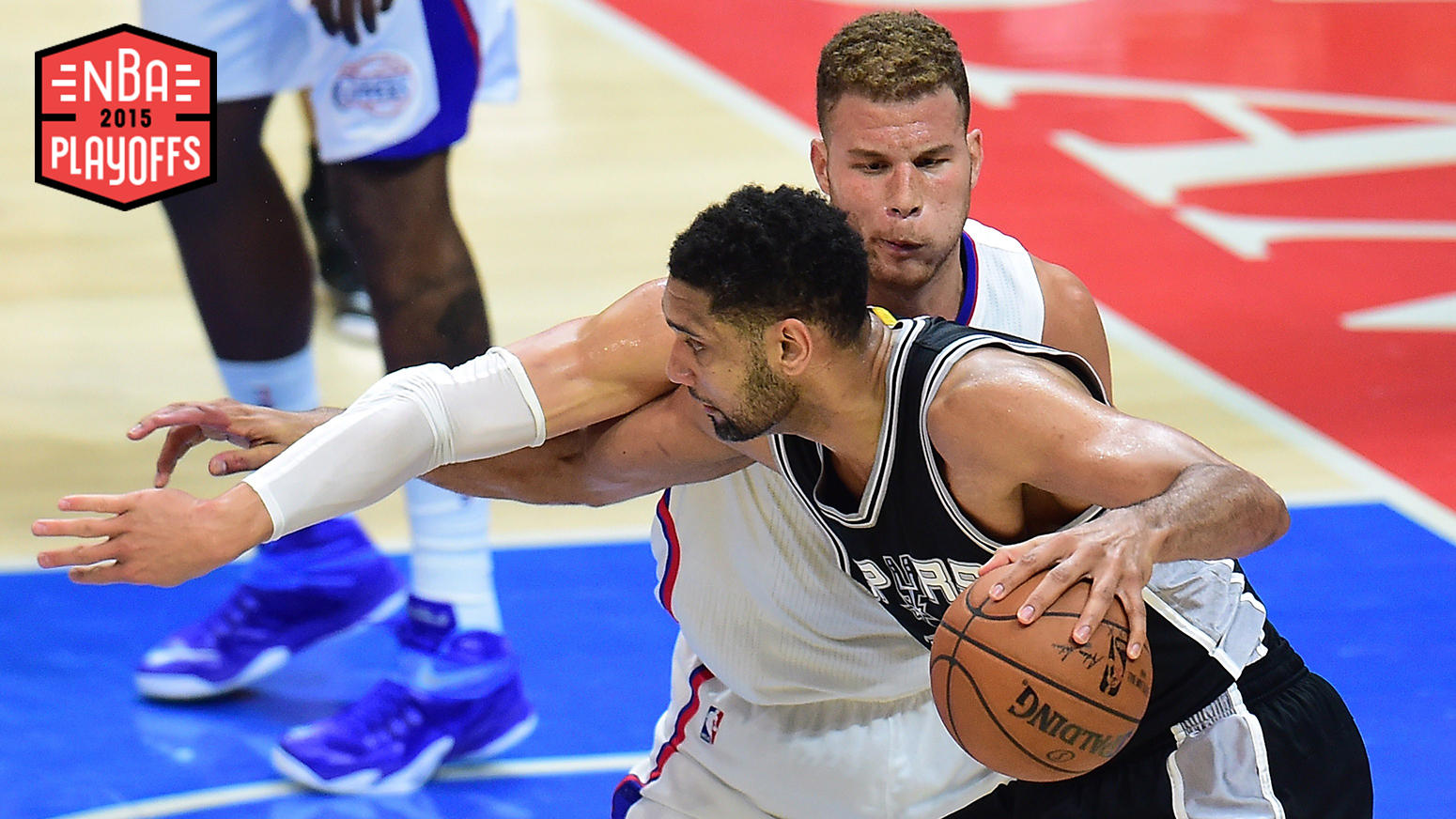 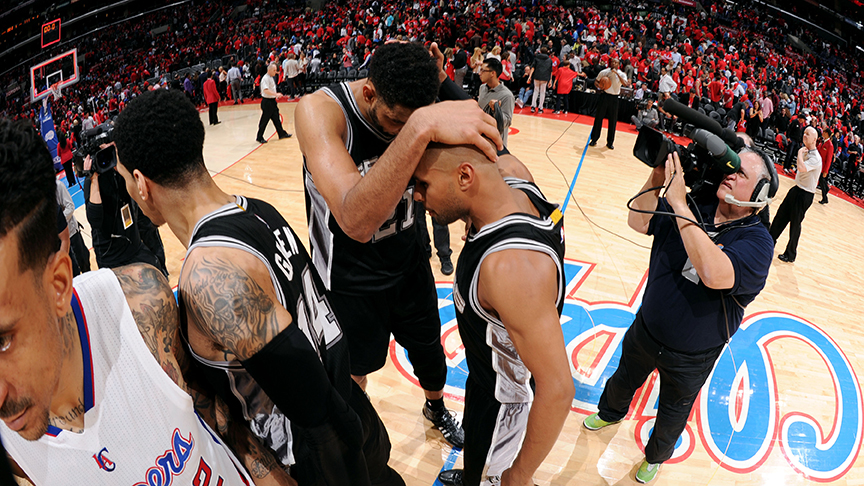 Jason Concepcion: Thank the gods for Clippers-Spurs, the series that’s single-handedly salvaging the first round of the Western Conference playoffs. I’m not including the Eastern Conference, because anyone who’s been paying attention — and of course you have — always expected the East bracket to be a whey-colored puddle of saliva seeping from the somnolent open-mouthed gape of our collective ambivalence. The East is basically the Cavs and seven Star Trek redshirts. (Sorry, Hawks.)

But, the West … the West was supposed to be so much MORE. That was before injuries devoured the Trail Blazers (not to mention the Thunder), leaving behind a cadaverous punching bag; before Rajon Rondo turned from a tortured genius into a petulant board-game-obsessed fuckboy. The first round in the West was supposed to be an unprecedented and glittering constellation of stars aligning in a competitive big bang. Instead, what we’ve got is essentially a Tidal-esque flop — big names and great records, signifying nothing.

The big names have showed up and showed out in this series. In two games, Blake Griffin has justified his regular-season decision to eschew his trademark posterize-the-world aggression for a more perimeter-centric approach. It’s like he spent four months with his screen brightness turned down and his notifications switched off. Now he’s ripping Aron Baynes’s soul out of his chest, turning Boris Diaw into a pillar of salt with a fast-twitch head-and-shoulders fake, and playing the high-low with DeAndre Jordan to perfection. Griffin had a 29-point, 12-rebound, 11-assist triple-double and two backbreaking late-game turnovers, including a dribble off of his foot at the end of regulation that will haunt him like a poltergeist should the Clips lose this series.

Tim Duncan’s ability to reach back in time and call down corduroy-and-aftershave thunderbolts has, at this point, ceased to be amazing. It is now merely unfair. At times, I felt bad for Jordan — which is amazing, considering Jordan put in a sturdy 20 points, 15 rebounds, and three blocks — not because D.J. staggered through an extended hack-a-him session as if he were guessing on a multiple-choice quiz, but because he was getting casually roasted by Duncan, who looked so comfortable and earthbound that I almost expected him to yawn while drop-stepping. Duncan went for 28 points and 11 boards like he was reaching into the cupboard for the oatmeal.

The Vanishing of J.J. Redick

Chris Ryan: The Clippers remind me a bit of the English Premier League team Chelsea. Great coach/manager (Doc Rivers, José Mourinho), iconic captain/leader who pushes refs as far he can (CP3/John Terry), electric attacking player whom opponents have a habit of elbowing/shoving (Blake Griffin, Diego Costa). And both teams like to turn up the heat on the court/field. Sometimes it means the opposing team makes mistakes, and sometimes it backfires. The point is, we don’t really know what a “chill” version of the Clippers looks like, and we probably won’t — not while Paul, Griffin, and Rivers are the emotional architects of the squad.

Usually, I find the Clippers’ on-court attitude about as endearing as I do Chelsea’s (not very), but every once in a while, under the right circumstances, I kind of enjoy the theatricality of it all. Despite how cynical it can look when Chelsea players surround a referee, I know it is in service of this larger goal that drives the club: to win as many trophies as possible. 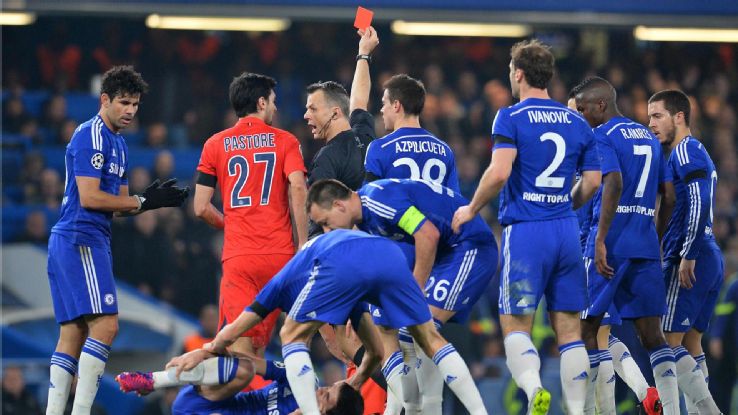 Last night, the Clippers were losing it, left and right, but don’t kid yourself: San Antonio knew exactly how to get under their skin and push their buttons. A little Timmy shove on Blake here, a stuck-out hip on a pick from Belinelli or Ginobili there. Doc has L.A. playing on a knife’s edge, and Pop’s got the Spurs standing around, sharpening their knives. Somehow, in the face of Hack-a-DeAndre cynicism, L.A.’s temper tantrums read different than usual. On Wednesday night, it just looked like passion. The Clippers have the theatrics down, at least. Now, about those trophies.

The Grizz, Beyond the Arc 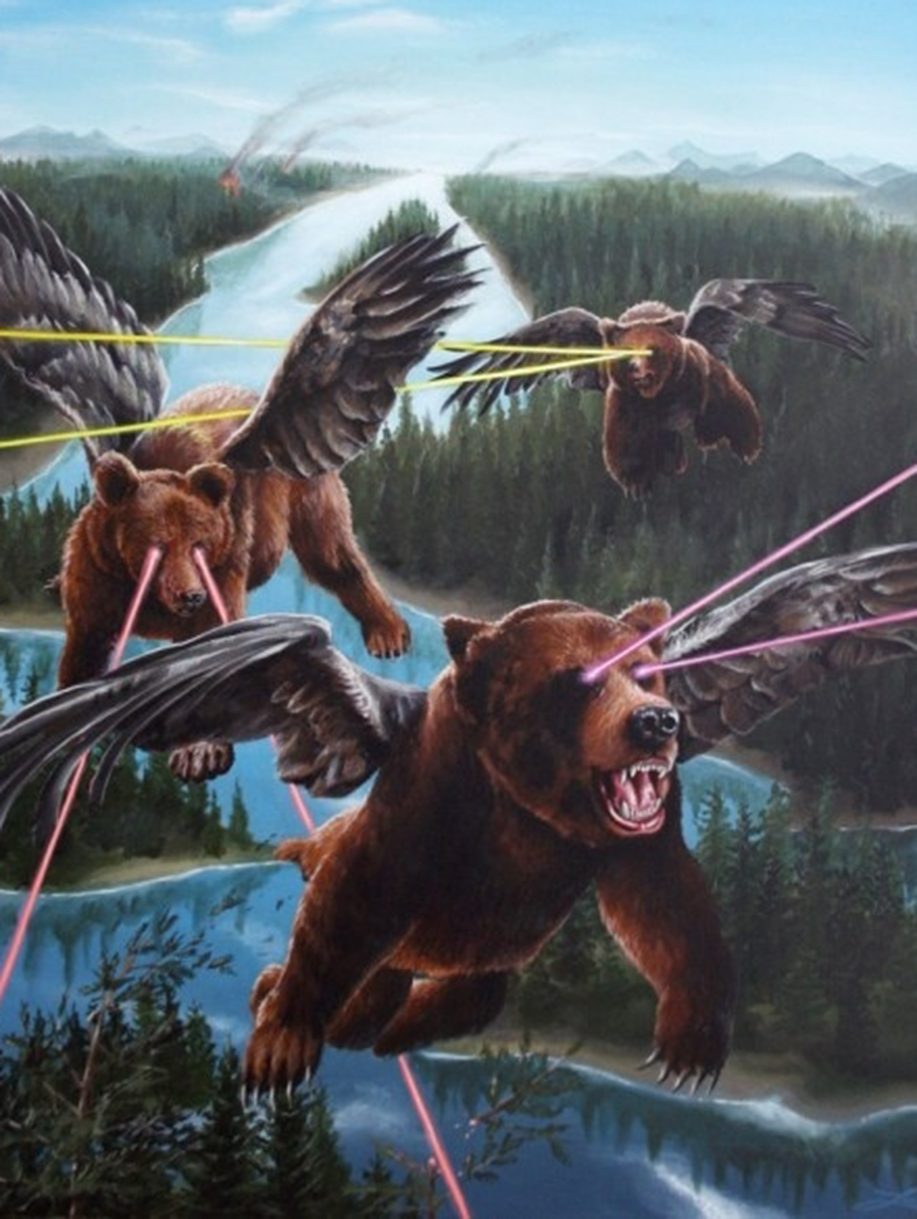 Danny Chau: Last night, the Grizzlies made eight 3-pointers on 50 percent shooting. Above is a neat shot chart of what that looks like. This season, including the playoffs, the Grizzlies are 15-1 when making at least eight 3s in a game. They’re 38-8 going back five seasons. Five seasons. Forty-six games. That’s it. For reference, the Rockets have 296 qualifying games over the last five seasons. Moral of the story: When a great team with a debilitating weakness blacks out and temporarily overcomes said weakness, the opposing squad has, like, an 18 percent chance of winning. Sorry, Portland.

You Can Never Quarantine the Past 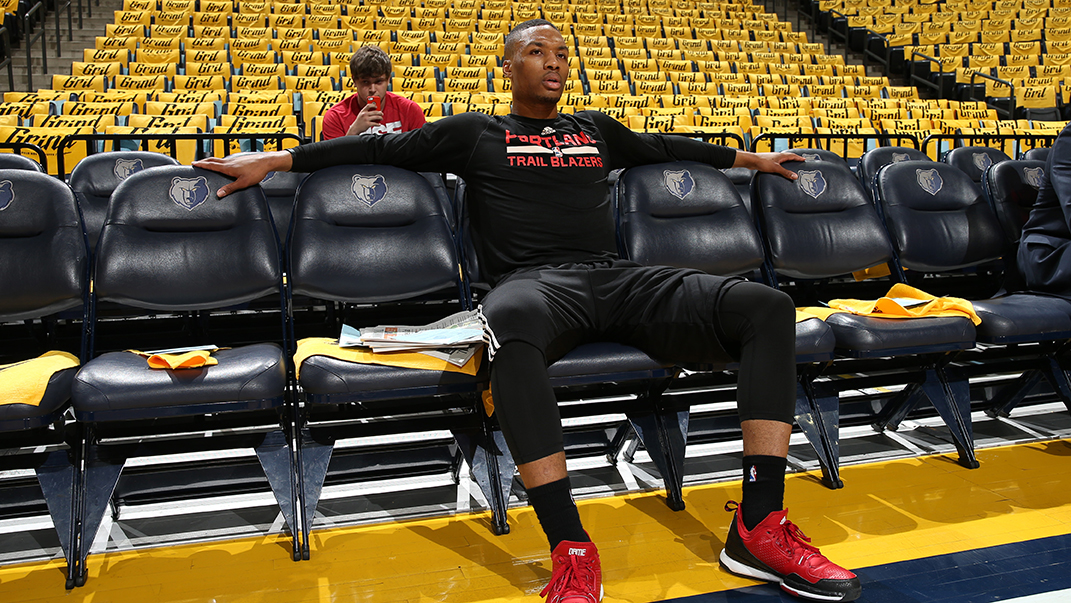 Chau: “I don’t think I need to duplicate anything.”

That’s what Damian Lillard told ESPN’s Baxter Holmes after a blowout Game 1 loss to the Grizzlies, when asked if there was pressure to duplicate the onslaught he rained down on the Rockets in last year’s opening round.

It must be strange for an athlete like Lillard to walk back to that time. He was sensational in those six games against Houston, averaging 26 points on 47 percent shooting (and 49 percent from 3), six rebounds, and seven assists. He capped it all off with one stunning, isolated moment of greatness.

As fans bound by nostalgia, we’re free to celebrate that game-winning 3 at the final buzzer, with minimal context, for time immemorial. But what about Lillard himself? Is it possible to go back to that moment without unpacking all that unfolded after — the disaster it led to? The eventual champion Spurs buried their fangs into him. Lillard’s 3-point shooting, which had burned the Rockets alive, crashed to 17 percent in the second round.

Fast-forward to today and it hasn’t gotten any better. Lillard is 10-for-37 in these two games against Memphis. His vows to compete on the defensive end in the playoffs have largely fallen flat, which is no surprise. After the All-Star break, Lillard was actually hurting the Blazers overall when he was on the floor; in the 14 minutes per game Lillard didn’t play, the Blazers were much, much better defensively. Lillard’s defense was never going to magically improve off of verbal affirmations made to the press, but it’s troubling to see his offense completely fail him, too. Outside of missing the playoffs completely, Lillard could not be further from last year’s first-round supernova. The playoffs turned Damian Lillard into a bona fide star; now they’re swallowing him whole. We’ll always have the memories, but Lillard’s best course of action might be to torch the past. Except, you know, in the opposite way he’s done it so far.

You Couldn’t Have Been a Contender 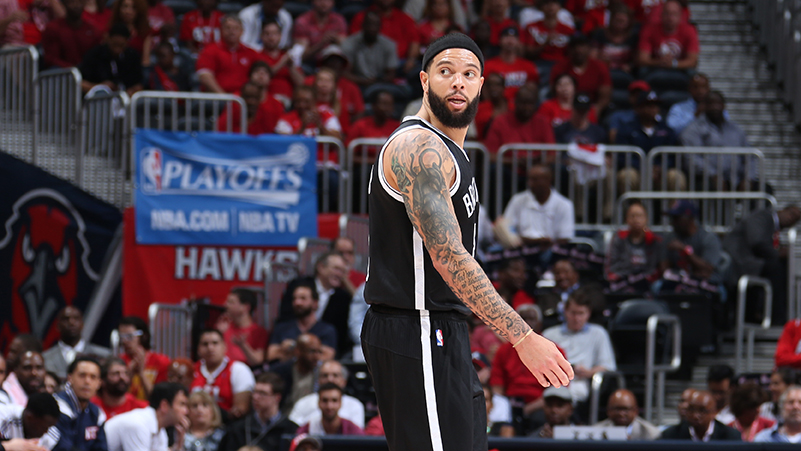 Ben Detrick: Brooklyn’s funeral merchandise might sail from the shelves, but the team itself has spent three seasons as a dreary collection of the earthbound. This year’s incarnation is again unexceptional. Still, after the Nets succumbed to the Atlanta Hawks in a tight Game 2, it appears that Brooklyn has moved into a new lane: Broken Middle-Class Strivers.

Deron Williams, Joe Johnson, and Brook Lopez are paid like superstars, but they’re not actually transcendent talents. They know they are viewed as disappointments, burdens, a rookery of salary-cap albatrosses. Unlike the Ubuntu Celtics, a band of veterans who played with snarling resentment, the Nets wear hangdog grimaces of resignation. When Williams’s potential game-winning jumper spun impotently out of the cylinder in last night’s game, his expression was Ah, yes, of course, as if his hard luck were scripted by Harvey Pekar.

Before “Brooklyn” became shorthand for nano-batch bourgeois fuck-shit, it was a borough for working-class schmoes — for Ralph Kramden in his kitchen, for Sal Fragione slinging pies for 25 years. Maybe this is who the Nets are, and why we can finally appreciate them: In inevitably finding a way to lose, they will satisfy our expectations instead of disappointing us.

Polish vs. Potential: Should Amari Cooper or Kevin White Be the First Wide Receiver Drafted?