How to Conquer Kentucky: A Five-Step Guide to Beating the Best College Basketball Team in America 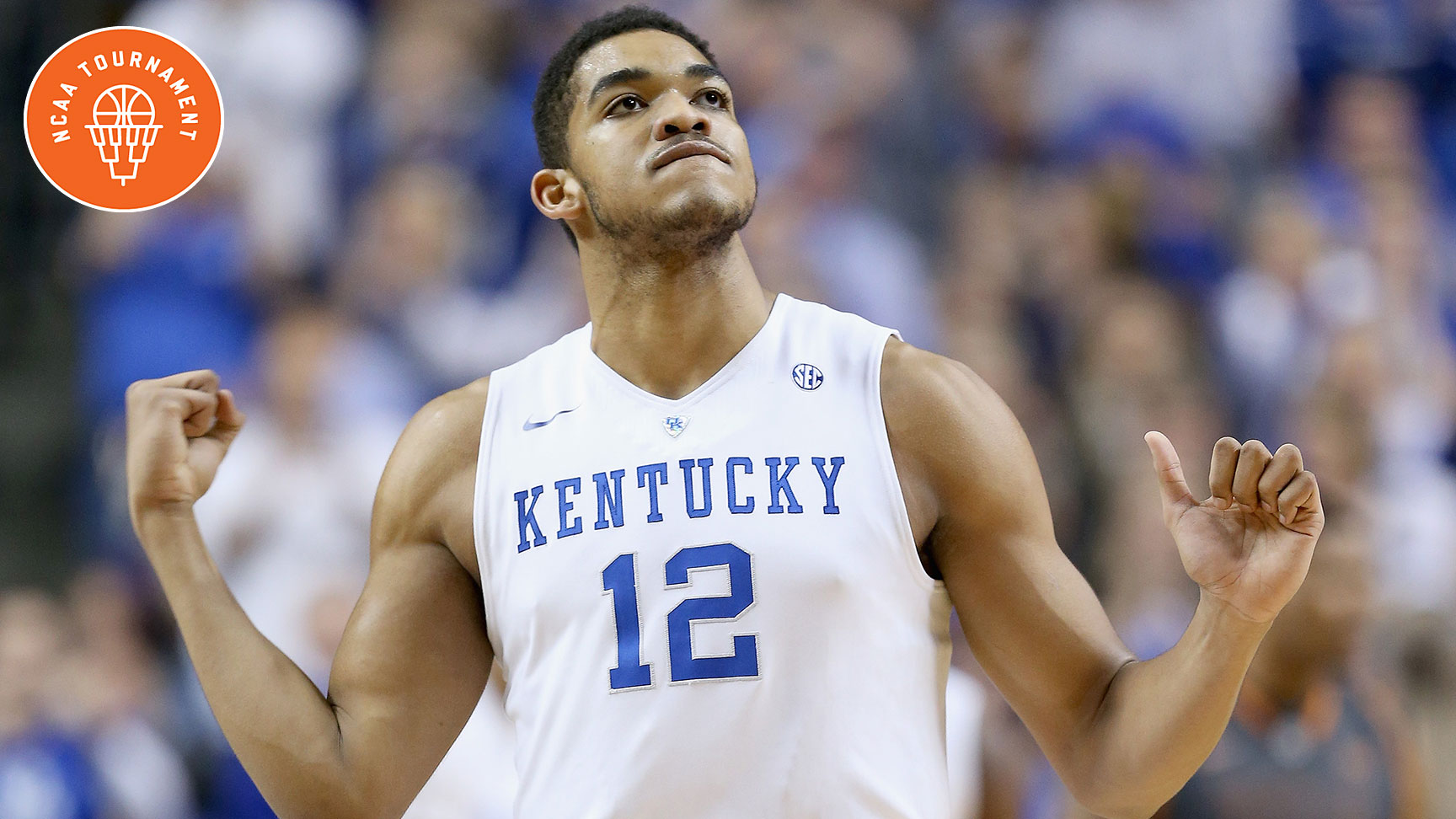 As you may already know, Kentucky is the only college basketball team that matters. Loaded with NBA-caliber talent and fresh off an undefeated regular season, John Calipari’s group has already established itself as one of the best collegiate squads of all time. The program’s dominance this season has fundamentally changed our expectations of what is a notoriously unforgiving and unpredictable competition. Instead of debating potential Cinderellas and the merits of a handful of teams capable of winning it all, college hoops fans across the country have filled out their brackets with only one question on their minds: “Can anyone take down Kentucky?”

All the Grantland coverage of the 2015 NCAA tournament, right here.
For the first 34 games of this season, that answer has mostly been a resounding “No.” A few teams, like Columbia, Ole Miss, Texas A&M, and LSU, have come close, but Kentucky managed to prevail each time. However, those four not-quite-close calls — as well as a handful of other in-game stretches from the regular season — might give tournament opponents some hope that perhaps there really is some combination of personnel and tactics out there that could tame the Wildcats.

Early in the season, Kentucky survived a scare against middling Columbia of the Ivy League. The reason the Wildcats only eked out a 56-46 victory on their home floor was because they played an opponent that ended this season ranked 333rd in adjusted tempo and 340th in average possession length. Although the Lions were helped by an early lead built thanks to some hot shooting, Columbia also dictated the tempo with patient offense, conservative defense, and a focus on taking away Kentucky’s transition game in order to prevent easy baskets like this:

In the NBA, more and more teams are punting offensive rebounding in favor of sending players back to stop the league’s bevy of great athletes from finding easy offense in transition. Kentucky, with its blue-chip talent, is basically a mini NBA team. So opponents should consider punting on second-chance opportunities in favor of sending at least four — if not all five — players back on defense once a shot goes up. While not attacking the offensive glass will limit a team’s scoring capabilities, it’s the best way to keep Kentucky in the half court and, perhaps more importantly, keep the possession count low.

Team Best Suited to Do It: Wisconsin

Step 2: Pick Your Poison and Let That Choice Dictate Your Post-Up Defense 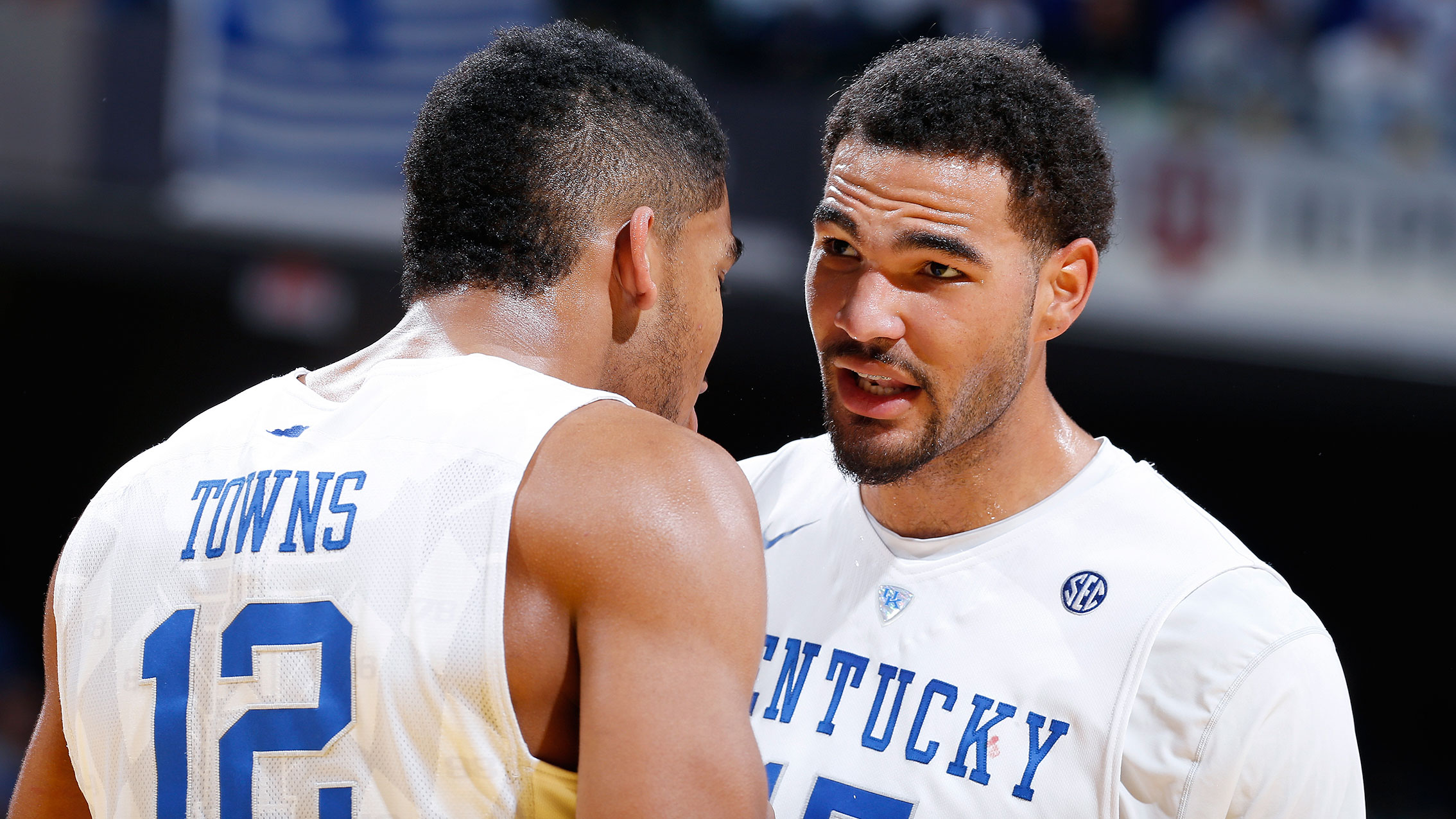 In a basic sense, beating Kentucky comes down to gambling on what offensive group you want to let beat you: the dominant frontcourt, or the talented backcourt led by the Harrison twins? When comparing the Harrisons’ poor shooting numbers (both shoot below 40 percent) with the lottery-pick-filled frontcourt of Willie Cauley-Stein and Karl-Anthony Towns, it’d be easy to assume that all defensive effort should be put toward stopping the pair of future pros. But you could just as easily turn that around: No one can hope to stop Kentucky’s frontcourt, so you might as well let them get theirs and instead focus on locking down the shaky shooters.

In that quartet of close calls this year, the Harrisons shot a combined 27.6 percent on a whopping 94 attempts. That suggests that when the twins are bad, Kentucky is beatable. So, how can an opponent create an environment in which Andrew and Aaron Harrison struggle to find easy offense?

You make their best players beat you by not doubling on post-ups. While this seems like the path to a long, slow basketball death — and, of course, it might be — it allows for tighter pressure along the perimeter and forces the Harrison twins, along with backups Tyler Ulis and Devin Booker, to either take contested jumpers or throw the ball to their big men. And although Kentucky’s bigs are frightening in the post, they’re not that frightening.

The Wildcats average 0.969 points per possession. According to Synergy, Towns has produced just 0.848 PPP on 112 charted post-ups. Dakari Johnson and Cauley-Stein, meanwhile, are slightly worse at 0.8 and 0.797, respectively.1 Kentucky’s best offense from post-ups comes when Towns isn’t scoring, but passing, either on kickouts to shooters or slick interior passes that shred double-teams like this one against Arkansas.

This season, one team experienced some success using heavy doses of single coverage in the post against the Wildcats. In its three matchups against Kentucky, Florida held this potent offensive group to 66.3 points per game — well below its season average of 74.9. The reason the Gators lost those three games had to do more with their anemic offense than their defense.

Still, this tactic doesn’t do anything to solve the whole “Kentucky is really good at offensive rebounding” thing. As we’ve come to find out, close shots not only lead to a greater chance for offensive rebounds, but all misses, including short-range post shots, also fall to the opposite side of the basket — a.k.a. right where the Wildcats’ second big man will be lurking for a chance at an extra possession.

In a vacuum, defending the post one-on-one makes all kinds of sense, but it’s rendered null if players can’t physically stop Towns, Cauley-Stein, and Johnson from bullying their way to the rim en route to dunks, fouls, or offensive rebounds every possession. Then again, no one said stopping a 34-0 team would be easy.

Team Best Suited to Do It: Arizona

If your goal is to bait the Wildcats’ perimeter players into creating their own offense, you better be ready to stop pick-and-rolls. Traditionally, college teams funnel ball handlers toward the middle of the floor. The NBA concept of “downing” — forcing side pick-and-rolls to the baseline — has yet to catch on. But if you’re playing Kentucky — which, again, is basically a prenatal NBA team — you might as well go all out.

The best way to accomplish this is by dividing the floor into two halves, labeling the right side “strong” and the left side “weak.”

Now wherever the pick-and-roll occurs on the floor, the defenders can use this imaginary dividing line as a simple landmark to push ball handlers away from the screener and toward the nearest sideline. While this seems like a simple concept, it’s a lot harder to execute than it appears, especially for college teams. Compared to the standard collegiate pick-and-roll coverage, it requires a much more complex set of responsibilities for each defender.

While it’s tricky to pull off — and even moreso with limited practice time between games — this “weak/strong” tactic essentially forces the ball handler to either make quick, accurate passes to his teammates on the weak side (something college guards are typically not very good at) or take tough off-the-dribble shots — which none of Kentucky’s guards convert efficiently, according to Synergy — while attacking two defenders.

This coverage would also benefit from the fact that Kentucky doesn’t space the floor very well during pick-and-rolls, particularly with the starting lineup that features the non-threats like Aaron Harrison and Trey Lyles. The only true shooter on the roster who can break down such a scheme is Booker, but there’s a way to nullify him that doesn’t even involve a team’s defense.

Team Best Suited to Do It: Iowa State

Step 4: Spread Them Out and Attack Devin Booker 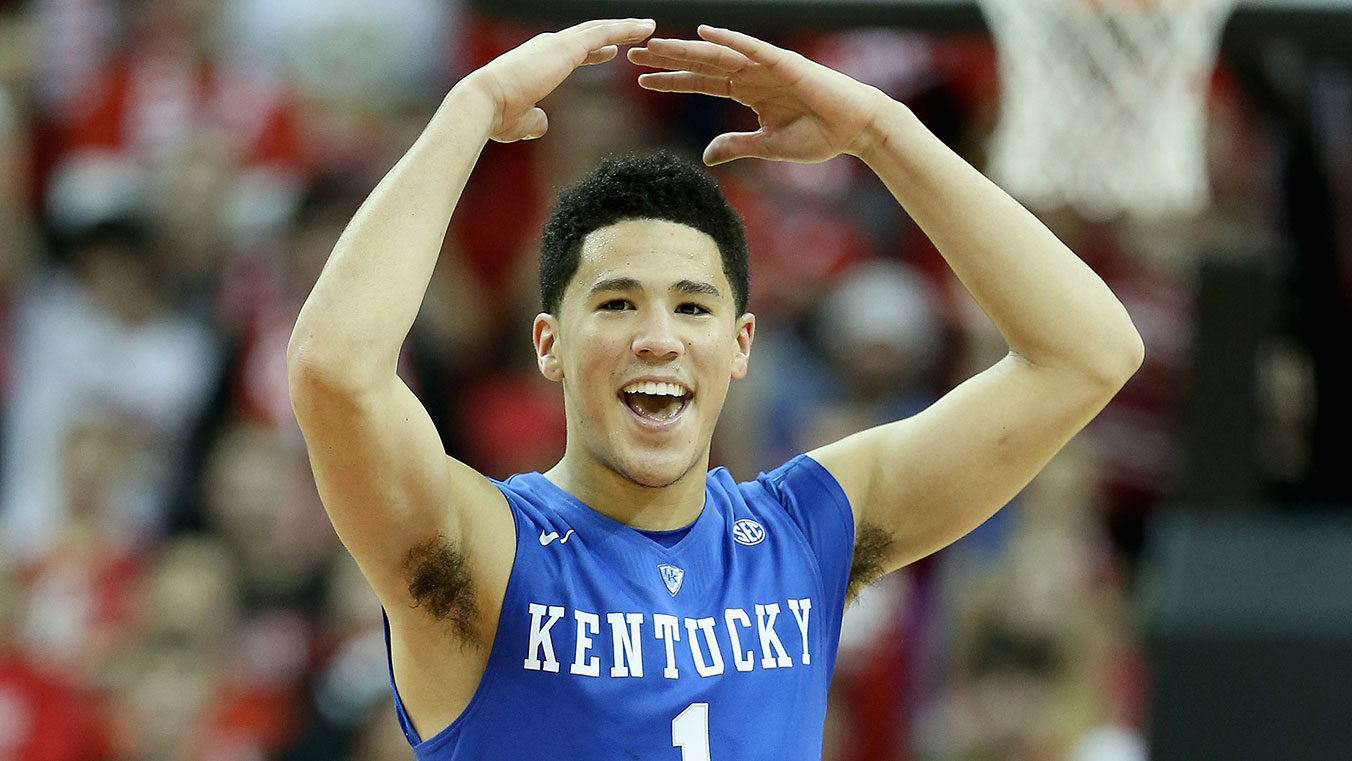 For teams that play two non-shooting big men, finding consistent offense against the Wildcats is almost impossible. Teams must do whatever they can to pull at least one of Kentucky’s dominating paint presences away from the basket. Just look at how spaced out the Cats get when teams really stretch the floor. 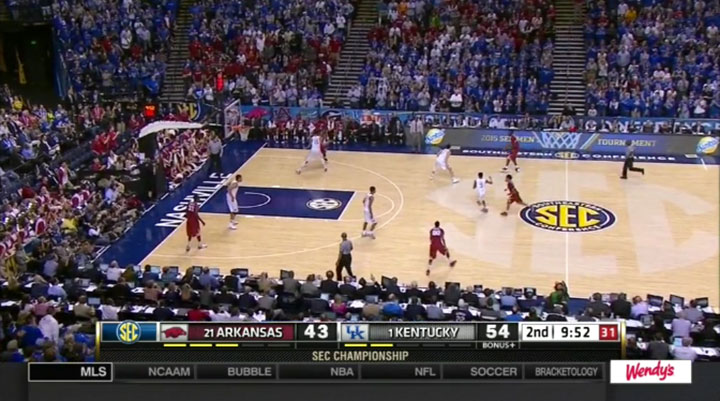 There are acres of space just waiting to be exploited by teams if they get their alignment right. But once they create the room, they then need to properly attack Kentucky’s stretched-out defense. And the best way to do that is through pick-and-rolls, which are arguably the weak point of Kentucky’s formidable defense.

Even though Texas A&M’s Alex Robinson misses in this clip, his ability to isolate and attack Cauley-Stein downhill frees up the opportunity for his teammate to clean up with an easy putback. This is the type of play teams should run nearly every trip down the floor against the Cats — so long as they have guards that excel at penetrating or making plays for teammates.

Whether it’s through constant pick-and-rolls or isolations, the guard to target here is Booker. While the freshman is a great offensive asset, his defensive chops, particularly given the ball pressure he’s asked to provide in Calipari’s system, are lacking. Per Synergy data, Booker ranks in the 45th percentile when defending in pick-and-rolls and the 35th when caught in isolation situations.

Given that Booker plays just a shade under 22 minutes a game, opposing coaches should have quick-hitting isolations in their playbook designed to get the freshman defending in space. And if teams manage to exploit him, it will force Calipari to choose between compromising his defense or compromising his offensive spacing.

Team Best Suited to Do It: Maryland

Every team to take Kentucky to the wire has utilized a zone defense to some degree. The Cats aren’t that much worse against zone than they are against man — falling to .913 PPP from .918, according to Synergy — but it’s helpful to have a secondary defense to use against good teams just to throw them off their offensive rhythm.

A more unconventional — and despised — approach would be to institute the ol’ Hack-a-Shaq on Kentucky’s worst free throw shooter, Marcus Lee. At just 8-of-23 from the line this season, Lee’s 34.8 percent rate makes him a prime candidate for mathematically productive fouling, especially given college basketball’s 1-and-1 bonus rules. Unfortunately, Lee only averages 11.4 minutes per game, so finding him on the court will be hard to do. But if Lee’s in the game when a team is down 10 in the latter part of the second half, it’s a no-brainer for a coach to insert his most trusted walk-on to hack Lee into submission.

Team Best Suited to Do It: Utah

Unfortunately, while all of this may sound good in theory, college teams, especially ones matched up against a vaunted opponent like Kentucky, aren’t emotionless basketball robots capable of executing a game plan to perfection. (Although, having robots would help beat the Wildcats.) Teams may use a blueprint similar to this, follow through, and still find themselves at the wrong end of a colossal beatdown. As with all upsets, perhaps the biggest factor for any underdog comes in the form of foul trouble, missed shots, and a few 50/50 calls going its way. In simpler terms: Upsets involve luck. And to beat this Kentucky team, someone is going to need a whole lot of it.

Kentucky Is the Only Team That Matters