The Great Pumpkin Has Risen: Quad-A Player Dan Johnson Is Back in the Majors at Last! 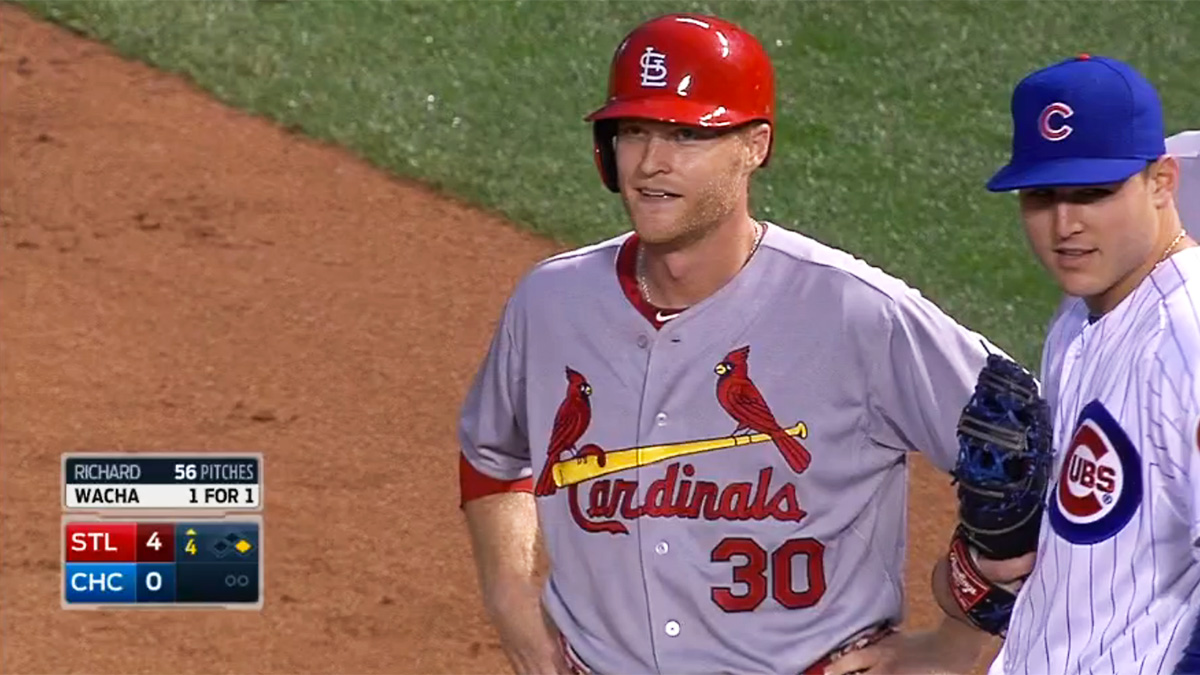 For some of us, every recent baseball offseason has stirred up anxiety as we’ve contemplated a question: Will Dan Johnson be back? We knew relief last night, when the Cardinals promoted the 35-year-old and inserted him into the lineup against the Cubs. But as the slugger crept into his mid-thirties, it seemed increasingly probable that his unlikely career, punctuated by two of the biggest bangs in Tampa Bay Rays history, might end with the sort of whimper that tends to send what we call “Quad-A players” into retirement. Eventually, one of these late autumns would have to pass without a team summoning the first baseman from its Triple-A affiliate up to the Show.

Grantland’s Jonah Keri nicknamed Johnson “The Great Pumpkin” for a reason, though: Autumn is Johnson’s time. In September 2008, in his very first at-bat with the Rays — after getting off a rerouted flight that barely got him to Boston in time to suit up — Johnson delivered a pinch-hit, ninth-inning homer off Jonathan Papelbon to help reverse the Rays’ long-term losing spiral and propel the worst-to-first upstarts into the playoffs. Three Septembers later, in 2011, he returned to the Rays after a miserable season spent mostly in Triple-A, playing dolefully through a wrist injury, and topped his prior heroics with another pinch-hit, ninth-inning homer — off a pitcher with whom he’d been teammates in Durham earlier that year — this one with two outs and two strikes. It was the pivotal moment of one of the most dramatic nights in recent baseball history, and it not only erased the last of a 7-0 deficit but resuscitated the Rays’ near-impossible climb out of a 9.5-game wild-card hole. They returned to the playoffs.

Johnson spent nearly all of 2012 with the Chicago White Sox’s Triple-A club in Charlotte. He had a very good year, but wasn’t called up all summer and was stuck there: To his chagrin, the White Sox didn’t offer opt-outs. “I’m just on the wrong side of luck,” he told me that spring, issuing the sort of Charlie Brown lament I got used to hearing from him, sometimes even when he was doing well, during the four years I covered him while he was in his various Triple-A uniforms. He had raked for Durham in 2010, winning the International League MVP Award, but kept wondering aloud if the Rays, who were paying him big league money, would call him up; that year, he had to wait until August. Johnson was always refreshingly candid no matter his moods, which were varied and unpredictable — I always knew I was interviewing a human being, not a cliché-droning collection of stats.

When the White Sox finally promoted him at the end of a lost 2012, he hit three home runs in a single game on the last day of the regular season — the Great Pumpkin rising again. He signed with the Yankees for 2013, scuffled in spring training, was dispatched to Triple-A, and finally opted out in August and latched on with the Orioles, for whom he got a few meaningless at-bats as the season waned. The Blue Jays picked him up for 2014, and he started the year in Buffalo, where he had a strong first half, not missing a single game, but nonetheless confided in a reporter that he was “on the wrong side of luck.” Oddly familiar!

Called up to Toronto soon after, the usually durable Johnson logged a few midsummer weeks in the bigs before really getting on the wrong side of luck, suffering a hamstring strain that sidelined him for most of the second half. The Astros took a flier on him for 2015, but abruptly dealt him to Cincinnati during spring training. Veteran Triple-A insurance like Johnson is seldom traded, so this was a slightly alarming transaction: Perhaps he was no longer considered a valuable presence? Was this the beginning of the end? Then, after the notorious slow starter, who’s been as cursed in springtime as he has been magical in autumn, went 2-for-29 (!) to start the year with the Reds’ Triple-A team in Louisville, he was released.

I feared the worst. Johnson will turn 36 this summer. The world teems with Quad-A first basemen younger than he is, and I’d seen one of his comparables, former Durham Bull Shelley Duncan, go gently into that good night the previous year at age 34.1 But the Cardinals signed Johnson and sent him to Memphis, where he hit a clutch homer soon after arriving and quickly got up to his old power-and-patience tricks. For the Great Pumpkin’s few but ardent loyalists, all was again right in the world.

Yesterday, the injury-ravaged Cards called up Johnson and started him at first base against the Cubs. Wrong side of luck, indeed: Righty starter Jason Hammel left the game after the first inning with a hamstring strain, so the lefty Johnson’s first at-bat instead came at a platoon disadvantage against southpaw sidearmer Clayton Richard. Worse luck: Johnson was also facing his old manager from the Tampa Bay days, Joe Maddon, who wasted no time in subjecting his pull-hitting former charge to an extreme shift.

But this time Johnson found himself on the literal right side of luck. The soft liner that he hit into shallow right field, just where Maddon knew he would, barely eluded shifted shortstop Starlin Castro’s dive, making for an RBI single. Two innings later, Johnson came up with a runner on third and no outs, and the Cubs shifted again and brought their infield in; the baseline from first to second was clogged with fielders. Again Johnson hit into the shift, a hard grounder to the right side, but Castro over-dove and the ball sneaked under his glove for another RBI single. The camera showed Johnson and his pumpkin-colored half-beard, then cut to the scoreboard’s display of his 1.000 batting average and lingered there, as if in a show of respect for the long minor league toil that earned Johnson his small-sample reward.

Johnson’s final at-bat last night came with two outs in the eighth inning, the bases empty, and St. Louis down by a run. The moment was ripe for more of his magic, and he delivered one of his trademark long at-bats, fighting off numerous tough pitches from Hector Rondon and extending a full count. On the eighth pitch, though, he struck out swinging at a nasty slider. Johnson barked angrily at himself as he stalked away from the batter’s box, but some of us were sanguine on his behalf, for we knew why the Great Pumpkin hadn’t come through: It’s only July.

Where the Winners Are Weak: The Biggest Holes That 12 MLB Contenders Need to Fill Via Trade