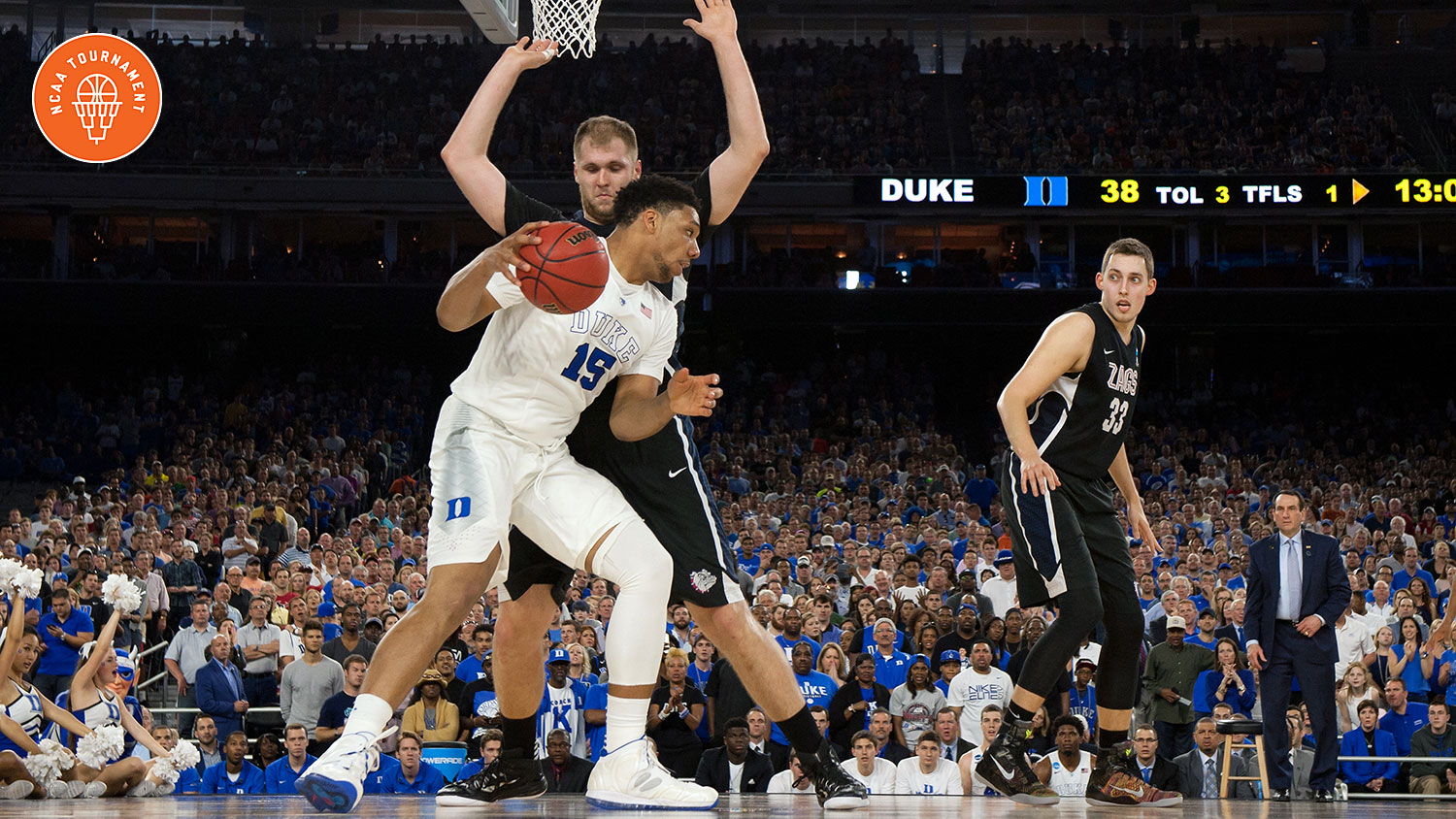 As you may already know, four of the NCAA’s most reliable college basketball programs will take the floor on Saturday in what promises to be a great night of hoops. There are countless reasons to watch: If you like coaches, several icons will be prancing along the sidelines. If you like the NBA draft, several lottery picks will be playing the biggest games of their lives. If you like Jim Nantz, well, he’ll be there, too. But also, if you like watching teams with varied offensive approaches — superstar-centric, balanced, or otherwise — lock horns, this weekend should provide plenty of fascinating matchups.

All the Grantland coverage of the 2015 NCAA tournament, right here.
Of course, any conversation about the Final Four begins with Kentucky, the undefeated behemoth poised to make history in Indy. One of the obvious reasons the Wildcats are so hard to beat is that they have an unmatched array of weapons. Despite all of the talent, John Calipari’s squad is way more than just a collection of random AAU parts. Calipari not only gets these whiz kids to play amazing defense together, but he also has built an egalitarian offensive attack that spreads the load fairly equally among its top five or six scorers. There’s no one person to stop — just many to fear.

Despite those relatively even numbers, as the Notre Dame game demonstrated, Karl-Anthony Towns provides the Wildcats with an old-fashioned offensive centerpiece. Towns is a monster near the basket, and as soon as he gets a low post touch, defenses face the unenviable choice of either sending a double-team, which will compromise the shape of their defense elsewhere, or taking their chances with a lone defender, which is what the Irish died doing last weekend. Towns’s shot chart is simple, but basketball is pretty straightforward when you can score like this in the paint. 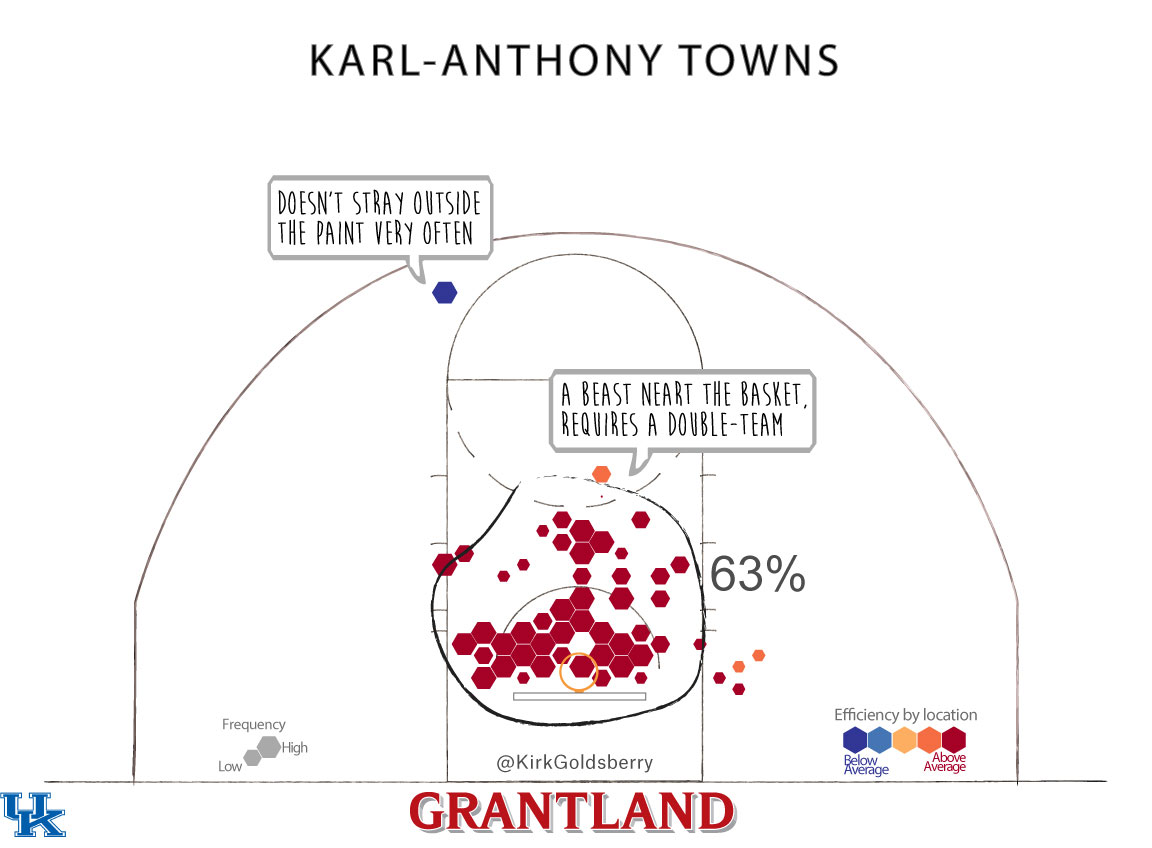 However futile Notre Dame’s defensive strategy seemed, it may have been the right approach. The Wildcats feature a litany of snipers more than capable of draining the kinds of open 3s that double-teaming Towns inevitably creates. Devin Booker is not only the best shooter on Kentucky, he’s one of the best shooters in all of college hoops. Calipari uses him in the corners and along the wings to spread the floor and make opponents pay for overloading elsewhere.

You could even make the argument that leaving Booker open beyond the arc is more dangerous than trying to defend Towns with a lone interior defender. 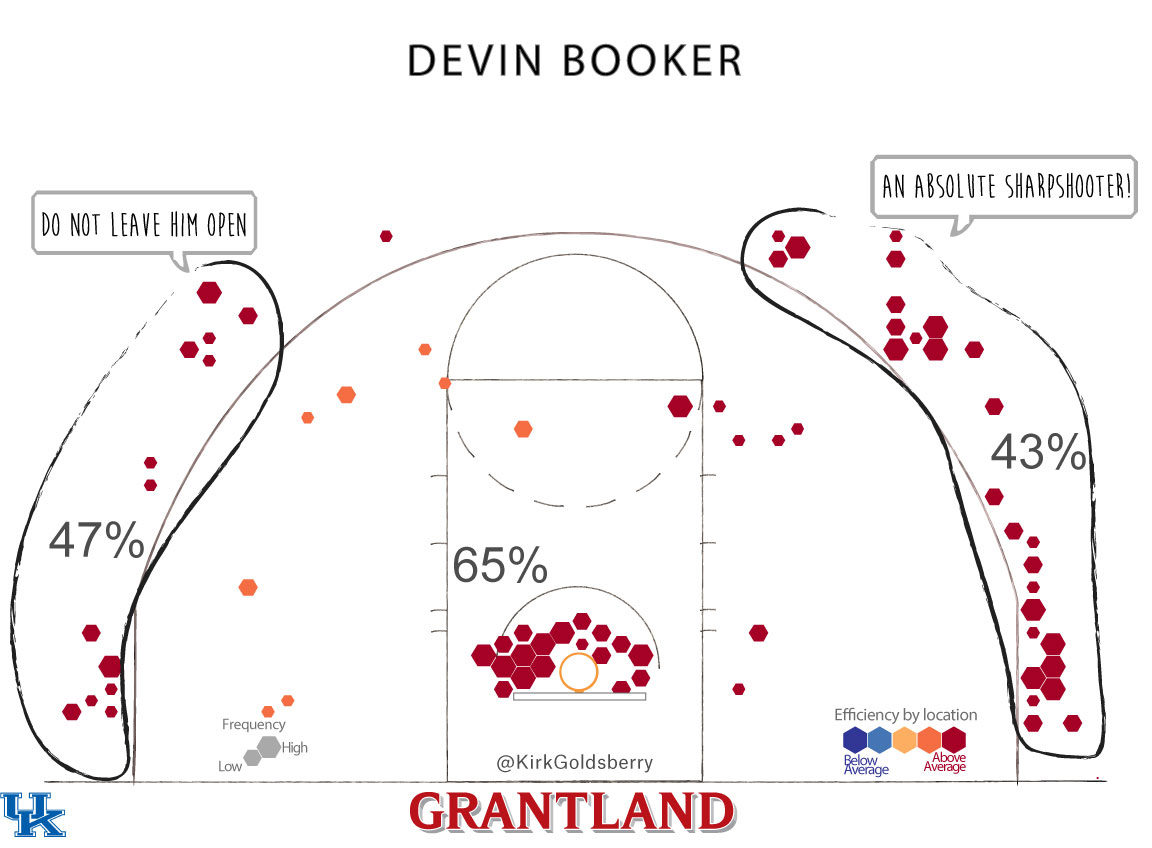 If Booker’s not feeling it, opponents might have a chance. Just kidding: If Booker’s having an off night, then Aaron or Andrew Harrison will fill it up from deep.

Kentucky’s ferocious inside-outside attack will face another big test Saturday night against the Wisconsin Badgers, a.k.a. Frankie and the Fundamentals.

While Calipari and Kentucky confound opponents with their democratic attack, there’s no question about who spearheads the Badgers offense. With the ability to score in both the paint and beyond the arc, Frank Kaminsky has the game of a really good, modern NBA power forward. Like Chris Bosh, he can post you up or stretch you out. However, with Towns and Willie Cauley-Stein patrolling the paint, Saturday’s game against Kentucky will really test Frank the Tank’s ability to score against NBA-caliber interior defense. Can Kaminsky show the world that he’s capable of dominating massive defenders? Or might this be the end of the line for the Badgers? 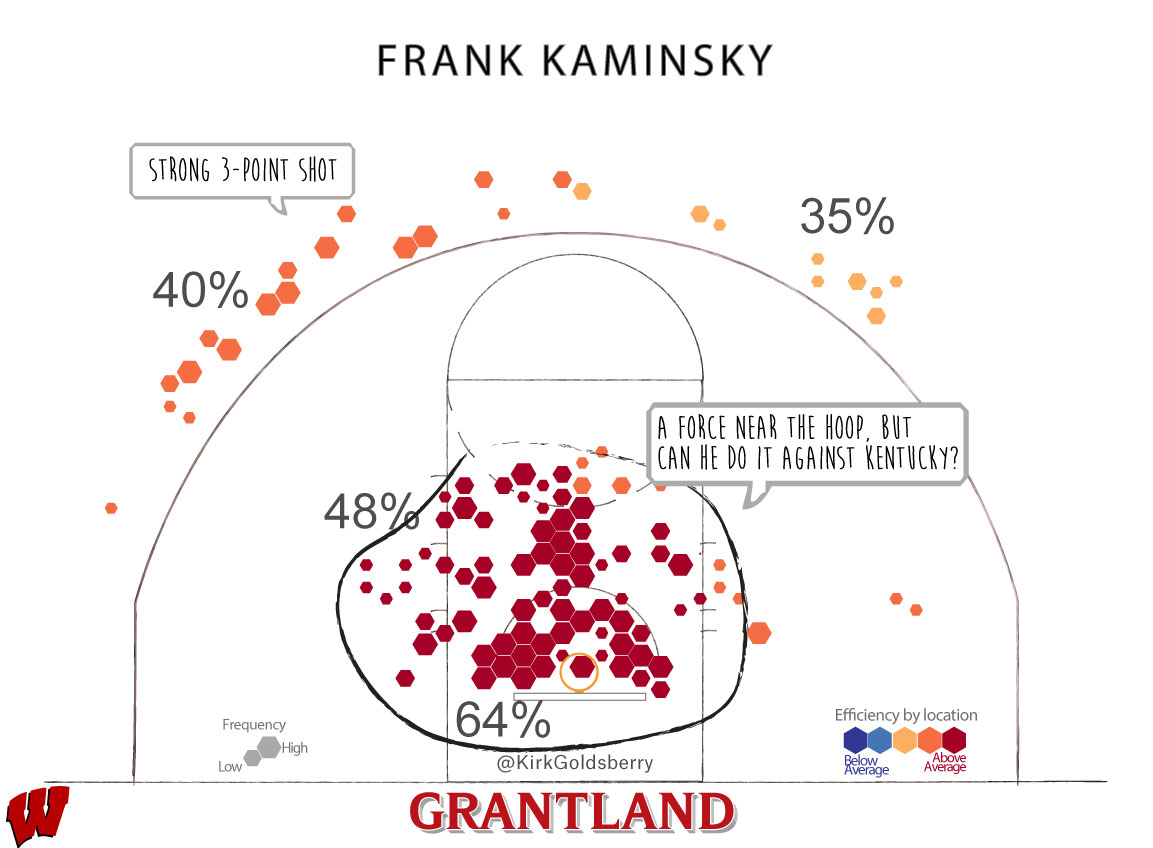 Wisconsin punched its ticket to the Final Four by ousting a fantastic Arizona team. In that victory, the Badgers were able to supplement Kaminsky’s reliable offense with 27 huge points from Sam Dekker. While he’s nowhere near as consistent as Kaminsky, Dekker still approaches scoring in a very similar way: He’s really strong near the rim, but as he showed when he iced the game against Arizona with that high-arcing moon-ball, he’s also capable of knocking down 3s. 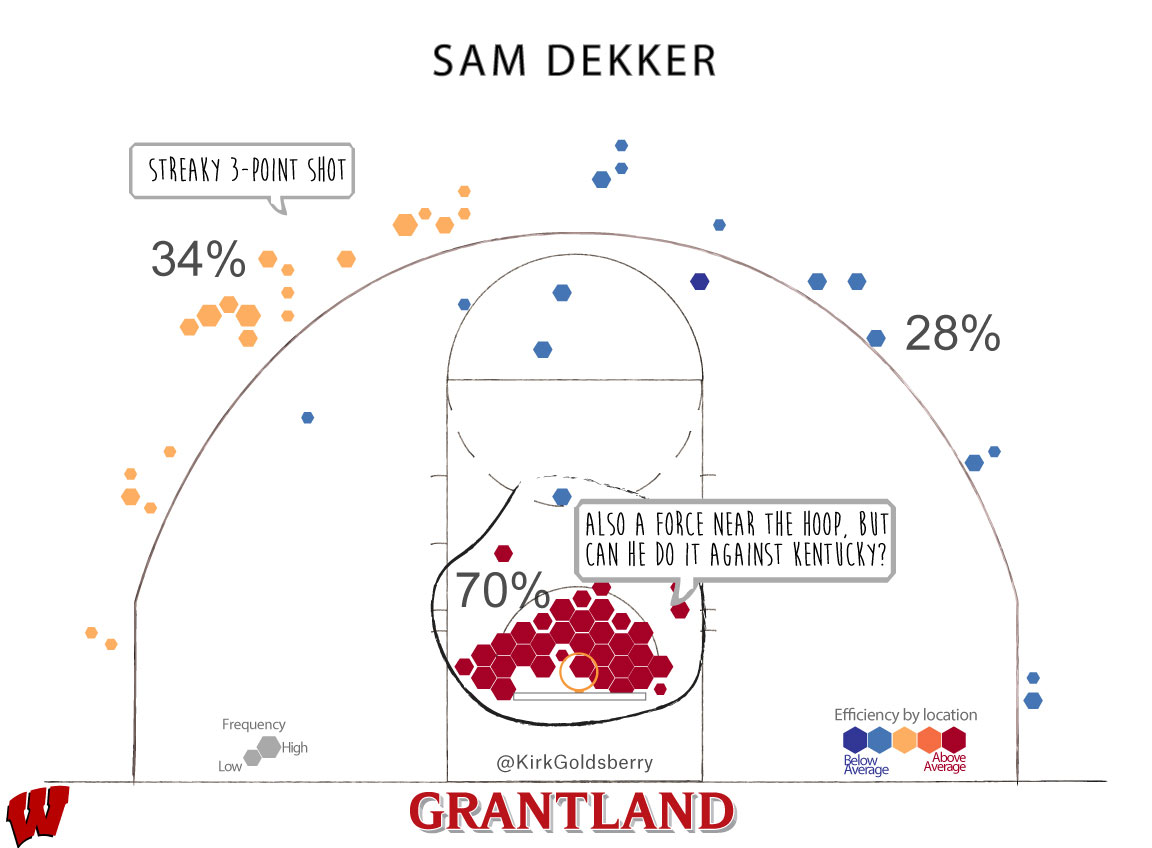 Man, who doesn’t love Duke? What else can you say? 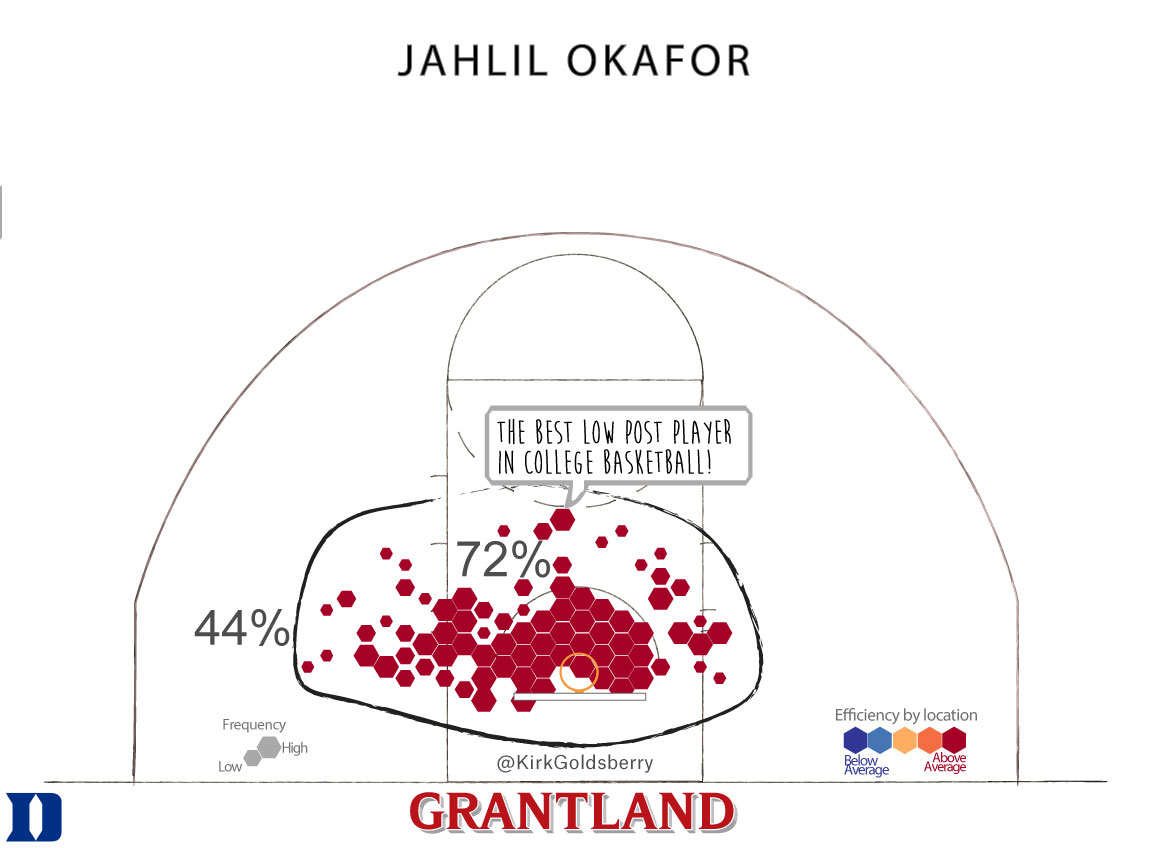 As you can see, virtually all of his points come in the deep paint and around the blocks. When you can score this well down there, why even try anything else?

Now, Okafor should be the focus of any defensive attempt to beat Duke, but these Blue Devils will punish any team that throws too many resources at stopping the big man. Specifically, guys like Justise Winslow, another possible lottery pick, and Quinn Cook, the team’s senior leader, will make opponents pay with rim attacks and triples. Winslow, who has the best name in the Final Four, is a versatile and athletic scorer who can drain 3s and attack the rim off the dribble. His favorite shot is the 3 from the left wing. 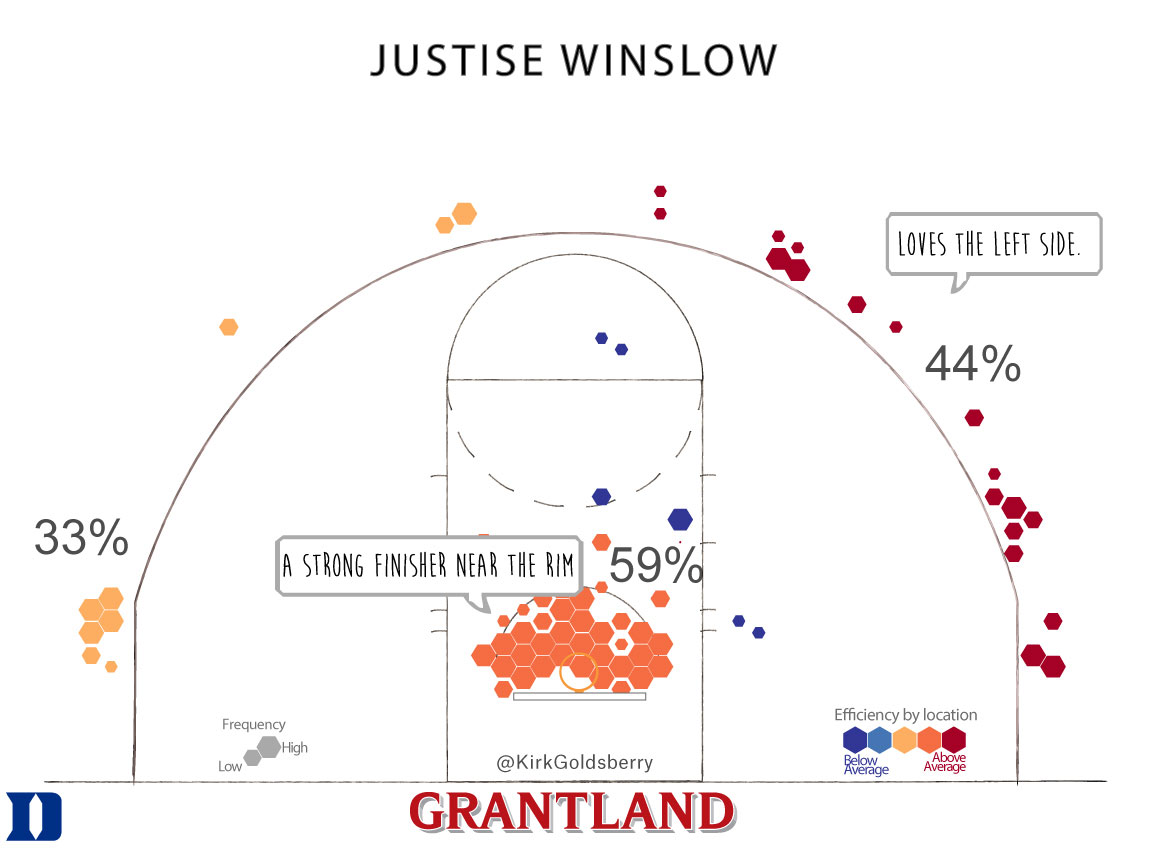 Like Kentucky’s Booker, Cook is a constant spot-up threat whose function is to keep opponents honest, especially along the wings and in the corners. 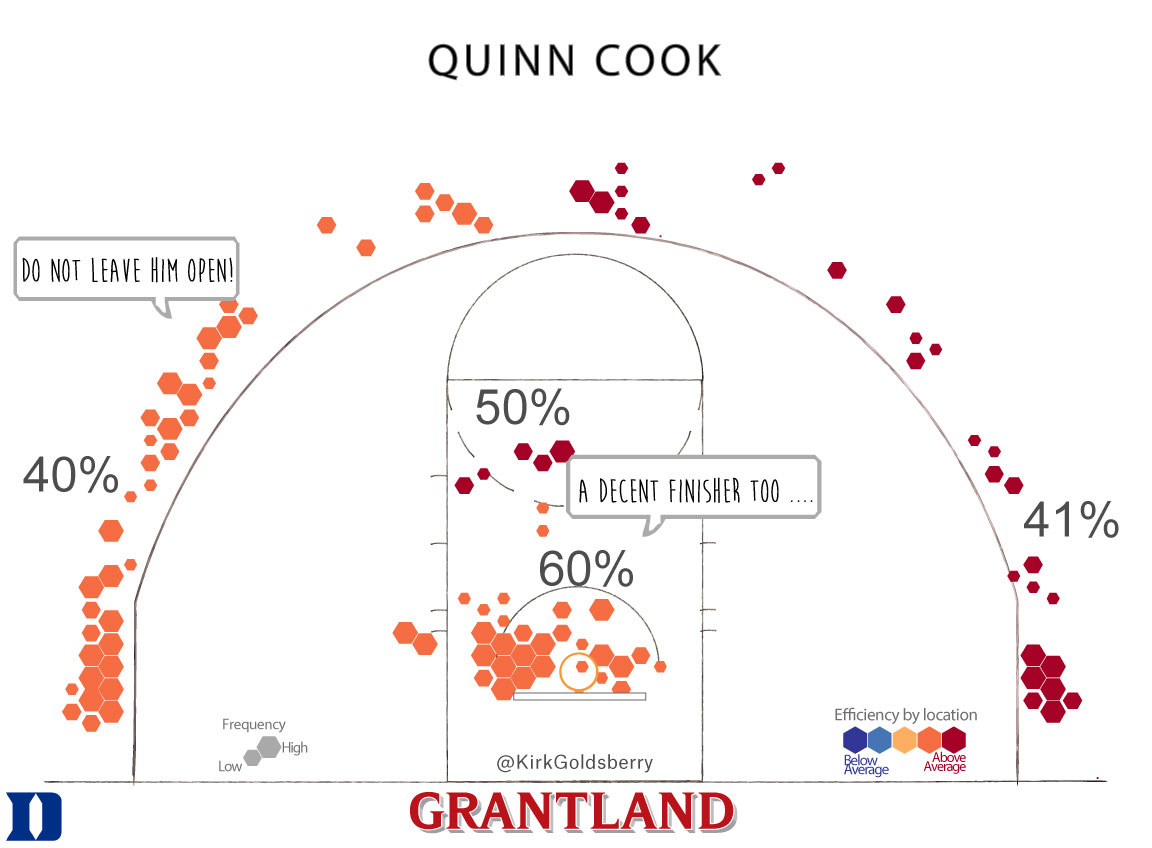 Duke’s formula is simple: beat you inside with Okafor and beat you outside with jump shooters. However, as clean as that approach is on paper, they’ll have to do it against a team that has a habit of making good offenses look terrible.

In the interests of journalistic transparency, it is here that I must admit I was a professor at Michigan State for four years and have no ability to be objective when it comes to Spartan basketball.

Now, this may not be Tom Izzo’s most talented team, but they’re back — a bunch of Burger King All-Americans, scrapping and toiling their way to the NCAA’s blue blood showcase.

Izzo always seems to have some of the most charismatically tough players in college basketball, and this year is no exception. Denzel Valentine, a Lansing native and the son of an accomplished high school coach, is not only the heart and soul of this MSU team, he’s also the most “Ginobili” of any player in the Final Four. In other words, he’s equally as likely to make an amazing play as he is to throw the ball into the stands. It’s beautiful and maddening, but as goes Valentine, so go the Spartans. He’s probably State’s most important playmaker, but the guy’s a pretty good scorer, too. 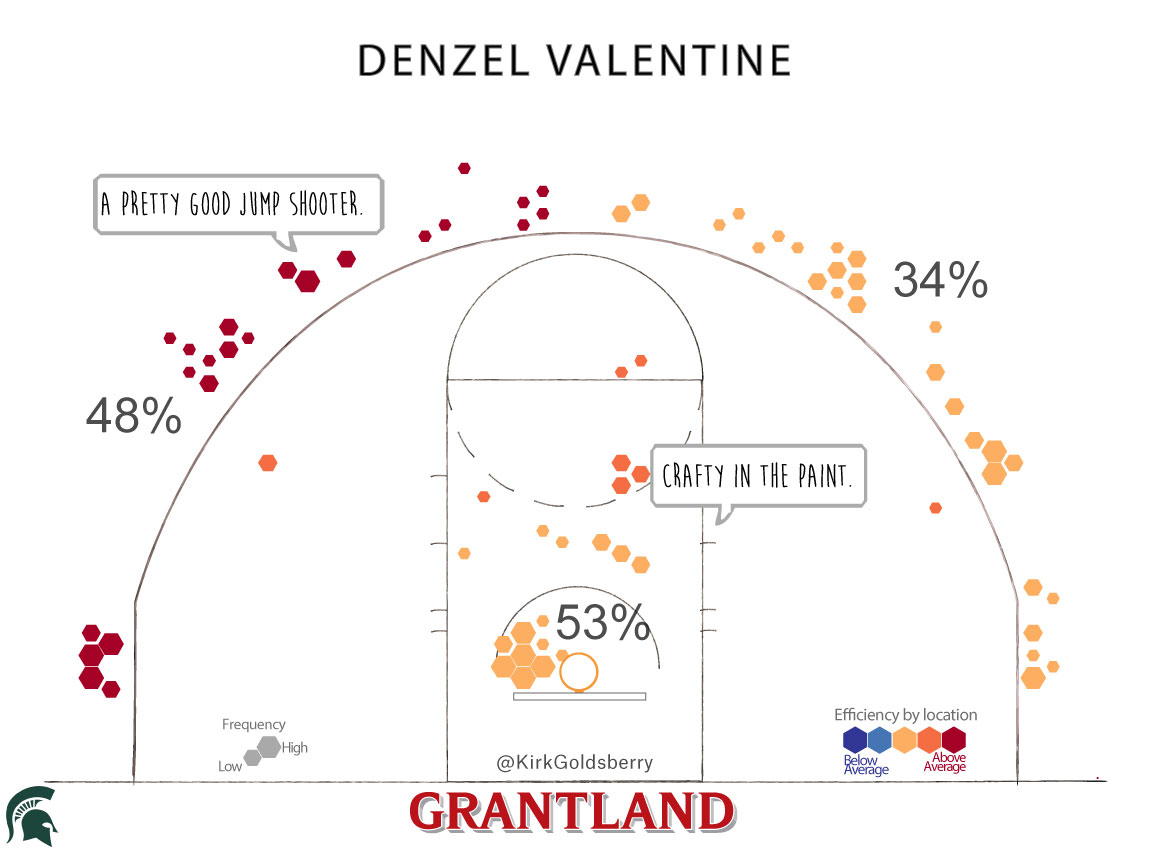 For all of his importance, Valentine certainly didn’t get MSU here by himself. No player has hit as many big shots for the Spartans this year as Travis Trice, who can both spot up and create his own looks off the dribble. 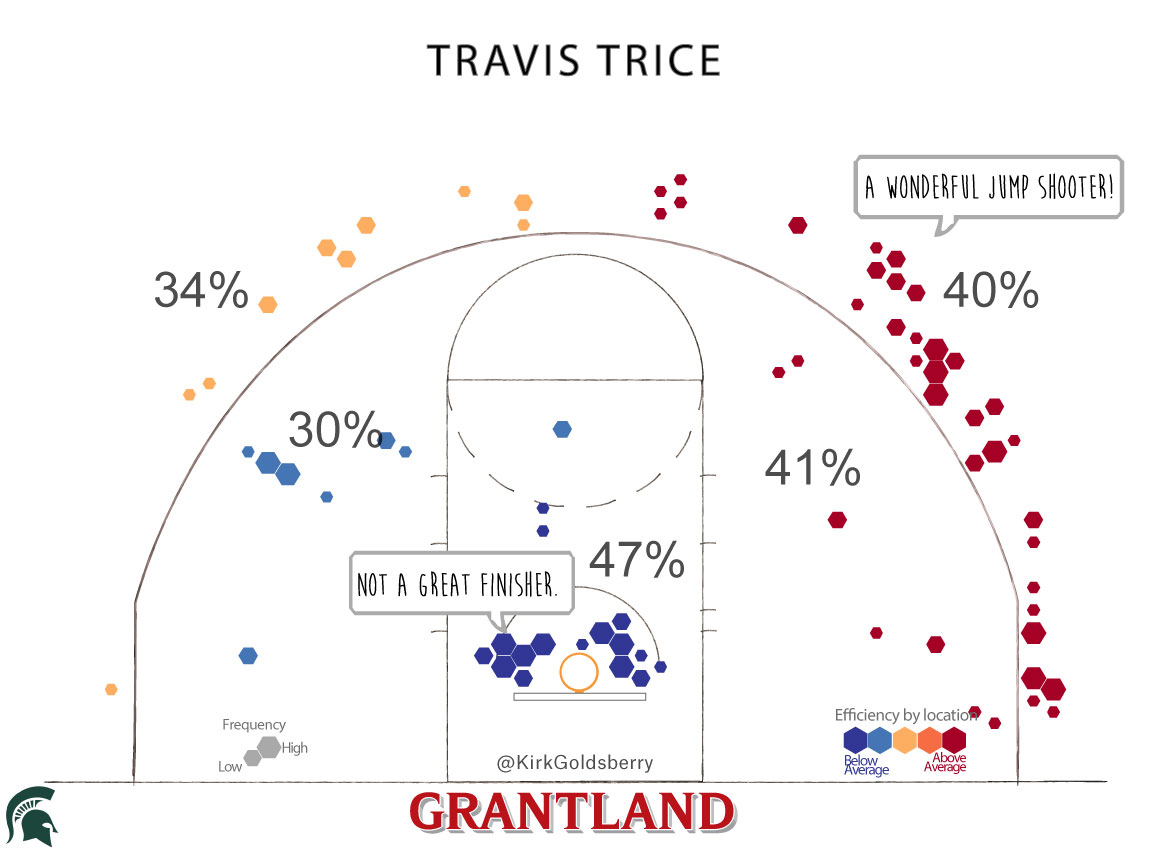 Even if Trice and Valentine have great games, the Spartans will need more help to upset Duke. The biggest X factor will likely be the enigmatic Branden Dawson, who made the biggest bucket of the game against Louisville in the Elite Eight but also has a frustrating tendency to disappear in big moments. If the Spartans are to have any chance of pulling off an upset this weekend, Dawson will have to be a difference-maker on defense, on the glass, and on offense, where he is by far the Spartans’ most athletic interior threat. 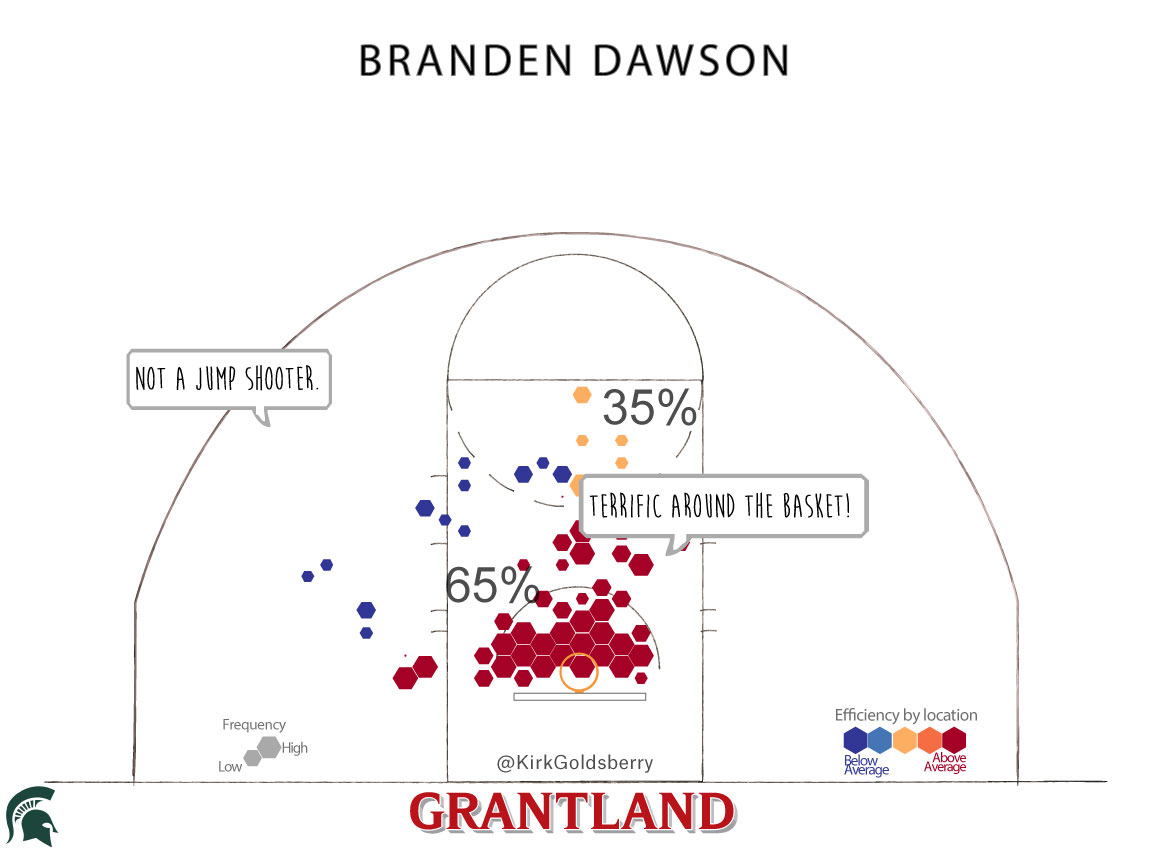 So will it be Kentucky’s “we do everything well” approach or Wisconsin’s stretch 4–centric machine? Duke’s smooth Okafor-and-the-outside game or Michigan State’s underheralded trio? We’ll find out in a few days. Enjoy the games, everybody.

Second City Blues: What Should the Titans Do With Their No. 2 Pick?