Because college football features a cruelly protracted offseason, fans require a heavy dose of off-field drama to survive the lean months between January and September. Whether that drama is authentic or contrived is irrelevant — its existence is all that matters, because any sort of controversy is enough to sustain the offseason news cycle for at least a few days, by which time another controversy will likely have materialized, thus starting the cycle anew.

Thankfully, we were blessed with a particularly eclectic assortment of controversies this offseason, ranging from obscure NCAA violations to a prominent rapper/business mogul accused of assaulting UCLA’s strength and conditioning coach with a kettlebell. So, as we transition into preseason camp, let’s celebrate the drama the only way I know how: with some totally arbitrary power rankings!

(NOTE: With the exception of the aforementioned kettlebell incident, which deserves a goddamn feature film adaptation, we’re avoiding any instances of criminal activity, because otherwise this blog post would be 10 times longer and 100 times more depressing.)

If you were among those devastated by the demise of the Texas–Texas A&M rivalry, take heart in knowing that the Lone Star Showdown continues to play out in the form of passive-aggressive administrative bickering. The latest example of this occurred in June, following Texas’s announcement that it would begin selling beer and wine at football games, reversing its longstanding alcohol-free policy. When asked if the Aggies would eventually follow suit, A&M chancellor John Sharp responded with a vicious burn, sending shockwaves from College Station to Austin that are reverberating to this day:

A&M chancellor Sharp on alcohol at events: "Our athletic program has not reached the point where we require the numbing effects of alcohol."

While a bit gratuitous, Sharp’s below-the-belt potshot is the closest we’re going to get to watching these schools face off for the foreseeable future, so for that he deserves our undying gratitude.

When it comes to creating farcical rules, no one, and I mean no one, can touch the NCAA. The quintessential example of modern bureaucratic overreach was at it again this offseason, sinking to a new low by outlawing Elliott’s majestic crop top. As Elliott rose to prominence during the Buckeyes’ run to the title last season, his bare midriff became an inseparable part of his overall identity, reminiscent of a bygone era when running backs were the rock stars of college football. As this picture clearly demonstrates, it was an objectively beautiful thing: 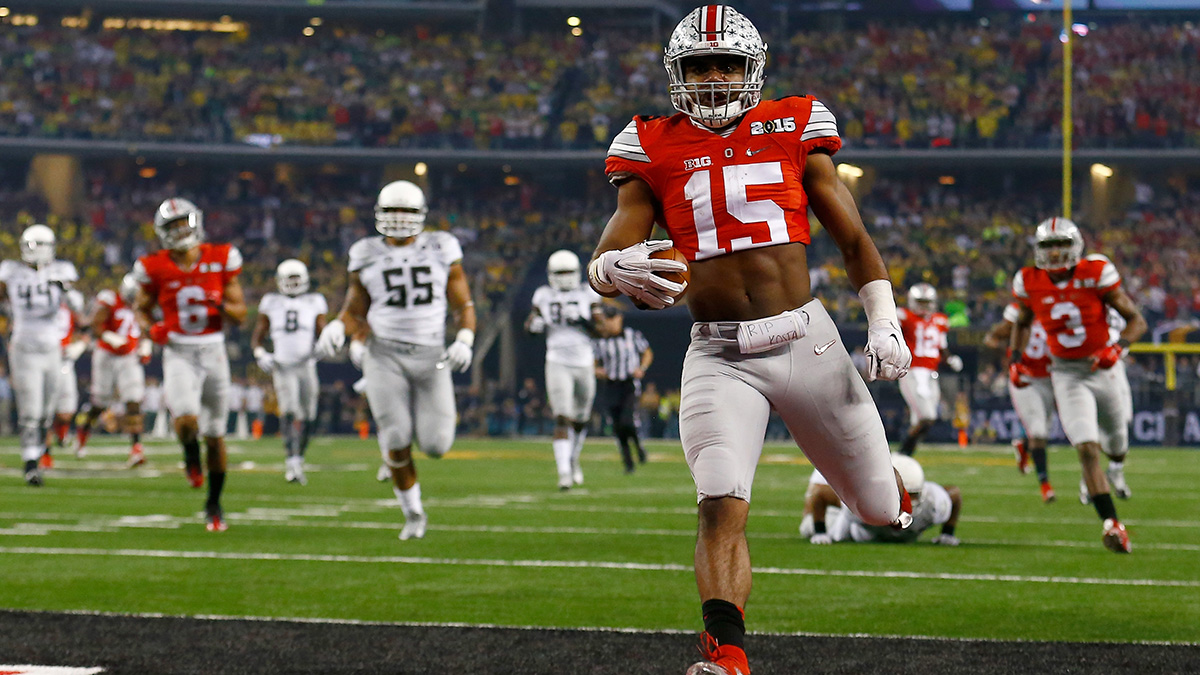 Lamentably, crop tops will now “result in a player having to leave the field for one play or having his team take a timeout before correcting it.” Other things the NCAA is presumably considering banning: ponies, amusement parks, and peace treaties. I strongly encourage every responsible citizen to sign this petition in support of the crop top. Spread the word, people!

OK, this is a bridge too far. What are they going to ban next, tailgating? Couches don’t start fires, arsonists do!

Also, if storied college football traditions are under attack, can we start by abolishing the Seven Nation Army chant? Please and thank you.

Scoff at the possibility of a service academy being involved in the national title race all you want — you wouldn’t be wrong to do so, as it hasn’t happened since this site’s namesake was on the beat — but the Army-Navy game’s scheduled December 12 date actually presented legitimate logistical problems that threatened to upend the entire college football season.

Basically, since Army-Navy is scheduled to take place after the final College Football Playoff rankings are released, the selection committee would need to delay its season-ending powwow if the Midshipmen — who are now members of the weak-sauce American Athletic Conference — remained in the hunt for the Group of Five’s automatic New Year’s Six bowl bid entering the second week of December. (Some of the proper nouns in the previous sentence felt deeply strange to type; college football’s new language still requires some getting used to.)

If it seems like I just described the most mundane controversy of all time, that’s because I did. College football headlines in May and June might as well be replaced by a tumbleweed GIF.

6. Charlie Weis Still Gets That Cheddar From Notre Dame, Six Years After His Departure From South Bend

Seeing as the details of Weis’s exorbitant severance package have been known for some time now, it was somewhat surprising to see this story make waves earlier in the spring. Then again, Weis receiving more money from Notre Dame in 2013 than BRIAN FREAKING KELLY is astoundingly hilarious and should be publicized as much as possible, so I’m not complaining. Let’s go live to Kelly to see how he’s coping with this. 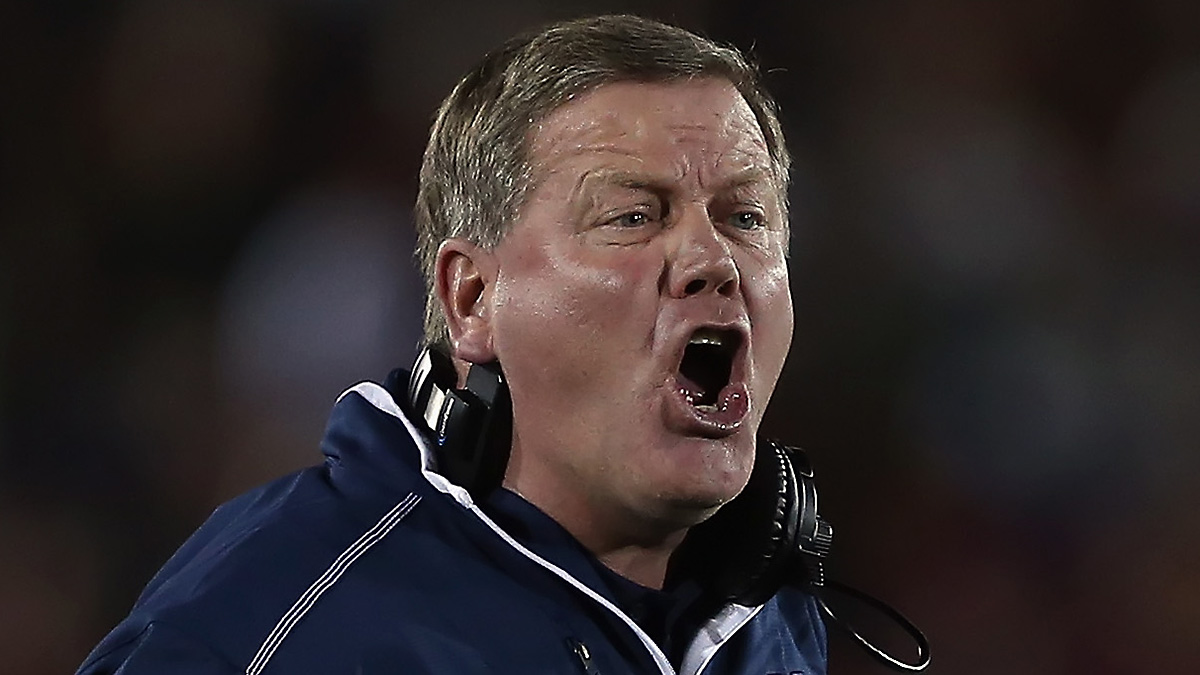 Never let anyone tell you that Weis isn’t the absolute embodiment of the American Dream. Is it too late for him to throw his hat into the ring for the 2016 GOP nomination?

Seriously, get a load of this unsightly penmanship.

For those interested in such things, Jay Paterno's letter to Urban Meyer http://t.co/unqkfiogBj pic.twitter.com/dVTlFHcw0C

Look, Jay, here’s a complimentary career tip for you: Handwritten letters are nice and all, but maybe just go with a word processor next time. Google Docs is free and easy to use! Microsoft Word’s clip art database is second to none! Urban Meyer can’t give you a job if he doesn’t know what position you’re groveling for.

Anyway, suffice it to say that Jay — who’s so serious about his networking that he’s even on LinkedIn — won’t be coaching J.T. Barrett and Cardale Jones this season. That’s good news for Barrett and Jones, who were doing just fine absent the wisdom of the self-described “[leader] in social media and public relations”:

"Don't get into a pissing contest with a skunk" –Some of the greatest advice I've ever received.

4. In Jarring Public Confession, Chris Simms Admits to Taking “$100 Handshakes” While at Texas

I mean, if this is true, Ricky Williams’s going rate must have hovered around … $200? $300? $400?! This reveal has caused me to lose all faith in the purity of amateurism, and I hereby demand that the Longhorns vacate their legendary 2003 Cotton Bowl victory over LSU. That will definitely make everything better. And can Charlie Strong retroactively kick Simms off the team? You know he’d gladly do it.

3. Michigan Football Sets up Satellite Camps Around the Country

The SEC’s and ACC’s archaic restriction against satellite camps — which are basically recruiting camps outside of a university’s home state — offers coaches from satellite-camp-friendly conferences an inherent advantage when it comes to recruiting out-of-state prospects. Unsurprisingly, Jim Harbaugh was quick to capitalize on this upon arriving at Michigan, organizing an ambitious June camp tour that made stops in Alabama, Tampa, Pennsylvania, Houston, Dallas, and California. As the old saying goes, the sun never sets on Harbaugh’s empire.

Also unsurprising: the self-serving way in which multiple SEC coaches, including Nick Saban and Dan Mullen, came out against satellite camps, despite these camps often being beneficial for recruits. To his credit, Harbaugh responded with the best troll job of the offseason, inviting every single coach in the country to speak at Michigan’s Exposure U camp in June.

As a Collegial gesture we invite Coaches from Every College to be involved in our football camp. #Compete #ExposureU pic.twitter.com/lMM4ZiSLx2

A whopping 31 coaches from around the country — albeit no one from the SEC — took him up on the offer.

You didn’t really think that Saban would find only one thing to complain about this offseason, did you? The Crimson Tide coach is a master at criticizing perfectly good- and fair-seeming aspects of college football, and at SEC media days, he directed his anger at the timing of pre-draft feedback for underclassmen, claiming that it damaged Alabama’s “team chemistry” heading into the Sugar Bowl. Never mind that Urban Meyer had to deal with the exact same thing, or that Saban had previously managed to win national titles despite this chemistry-killing phenomenon — if you can’t keep your players focused on something as huge as winning a championship, you probably don’t deserve to come away victorious anyway. Even Saban seemed to realize how ridiculous his comments sounded, as he backtracked from them almost immediately.

Bizzarely, the alleged victim was none other than Sal Alosi, whom you may remember as the Jets coach who got suspended after tripping Nolan Carroll of the Miami Dolphins five years ago. Not to defend kettlebell violence, which has plagued our society since time immemorial, but Alosi generally seems like a psychopath and apparently had a reputation for “bullying” Diddy’s son, Bruins defensive back Justin Combs, so it’s not impossible to see where Diddy might have been coming from. 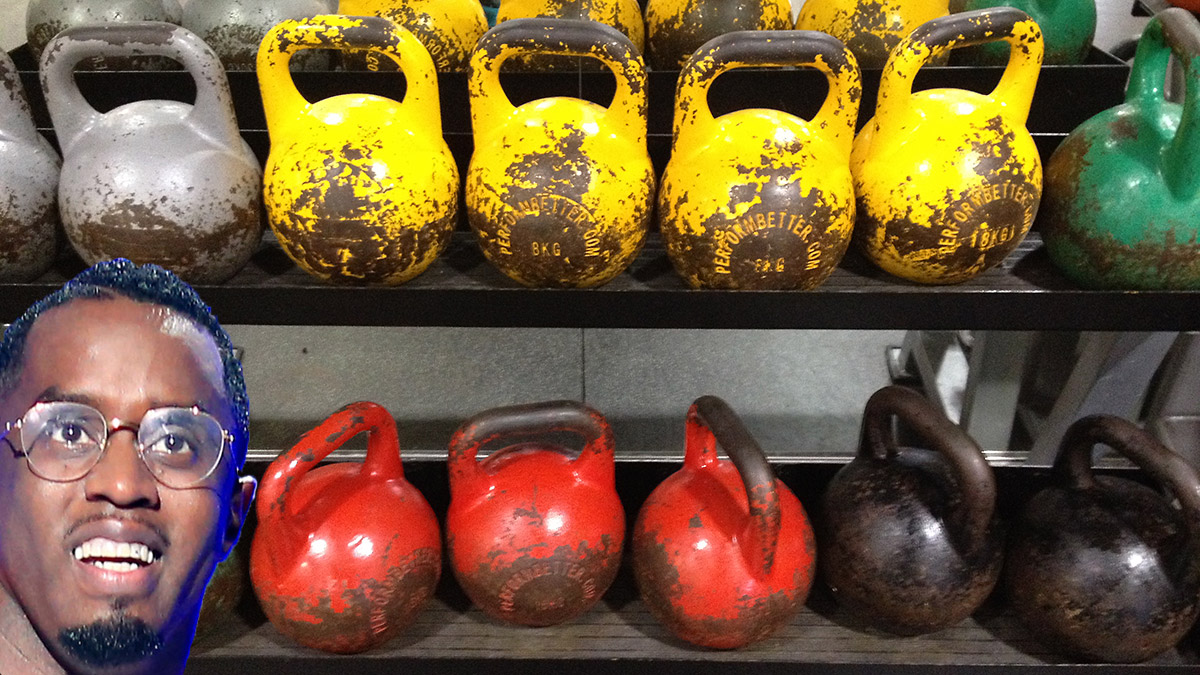