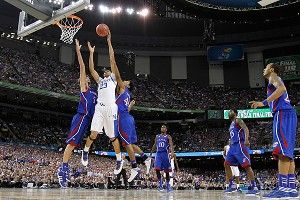 Bigs tend to be selected based on potential more than any other type of player in the NBA draft. If you have size and athleticism, you are nearly a lock for a lottery selection. Thus, teams make their choices based on projected skill, and scouts must account for many variables.

Strength: Cutting to the Rim/Making Himself Available

Anthony Davis has plenty of strengths on both offense and defense. I think the most important skill that he’ll bring to the NBA is how he works without the basketball, particularly in “cut” situations (as described by Synergy Sports). Last year, in these cut situations, Davis posted a PPP of 1.510, placing him in the top 4 percent of all college players, on an incredible 82.7 percent shooting. Because his post game is unrefined (more on that later), Davis will rely on his off-ball movement.

He is very smart about how he gets open, showing an understanding of spacing — when to back up (as his teammate drives) and when to dive to the rim (once his man helps). That skill, combined with his length and athleticism, makes him difficult to defend. He was impossible to stop in college and he will be impossible to stop in the pros.

Because he played point guard before he hit his growth spurt and went to Kentucky, he has a decent offensive arsenal. However, if there is one area where Davis struggles, it’s playing on the block with his back to the basket. When he went to his left hand (turning his right shoulder), he posted a PPP of 0.733 on 33.3 percent shooting (on a total of 30 possessions).

He needs to improve his hook shot (when going middle) and his baseline jump hook (when going toward the baseline). He compensates by trying to bring the basketball to his right hand when he should be going left, making it easier for the defense to contest shots. If Davis continues to struggle with his left hand, NBA teams (with scouting and video departments) will spot it and overplay his right hand, making him go to the left.

Davis has all the skills that Camby had in his prime, except he is much better. Let’s call him a rich man’s Camby.

Listed at 7 feet and 279 pounds (according to DraftExpress), Drummond has the body of a big, but he’s pretty darn athletic. His combination of size, bulk, and athleticism helps the most when he is defending post players, which will translate to the NBA immediately. He held opponents to just 35 points on 83 possessions, good for a PPP of 0.4222 (placing him in the top 4 percent of all players) on just 23.2 percent shooting.

Oddly, he gives up great position on just about every post touch he defends, yet because of his size and his discipline, that rarely hurt him in college. This is because once his man got his position, he couldn’t improve upon it because of Drummond’s strength, nor could he shoot over him because of Drummond’s length. He rarely jumps, opting to reach his long arms up to bother shots. When he does jump, rarely off a pump fake, Drummond goes straight up, avoiding foul calls while still bothering shots.

For all his talent on the defensive end, Drummond struggles on the block on offense. When posting up, he posted a PPP of 0.578, placing him in the bottom 16 percent of all college players. He still needs to work on the fundamentals.

On the left side, he uses his right hand and misses layups. When he goes middle from the right, he tries to shoot a turnaround jumper with his right hand, and that shot gets blocked. He needs to learn discipline.

Offensively, the Jordan-Drummond comparison fits. Defensively, Drummond has all the same skills that Jordan has in terms of shot-blocking ability off the ball, but because Drummond is more disciplined (doesn’t jump at pump fakes) he is a much better post defender than Jordan.

Unlike most of his cohort, Meyers Leonard has a refined post game. This past season, Leonard scored 173 points on 165 post touches, posting a PPP of 1.048 (good for the top 12 percent of all players).

What’s most impressive about Leonard is the type of work that he does before the basketball comes to him. He works hard and does a great job of reading his man to establish strong position, which makes it easier on himself when he does catch the basketball. Combined with his soft touch on the block, he is already strong in the spot.

Because of his ability to play with his back to the basketball, it makes him more of a “true” big man than most of his counterparts. However, there are some drawbacks to this, especially now that the NBA is trending toward using shooters and pick-and-pop guys at the four position rather than back-to-the-basket bruisers. (Case-in-point: the Miami Heat won a championship with Chris Bosh playing center.) Leonard will have to defend shooters, which will be a challenge since he tends to lose his man. In spot-up situations as described by Synergy Sports, opponents posted a PPP of 0.946 against Leonard, placing him in the bottom 50 percent.

Leonard can close out effectively, but too many times he does it late because he loses track of his man. Leonard must learn to simultaneously help on defense while keeping track of his assignment.

The way that Leonard establishes position both in the half court and on the break is pretty similar to Splitter, though Leonard has a better feel around the rim.