17 Reasons You Should Support the Change to ‘New Orleans Pelicans’ 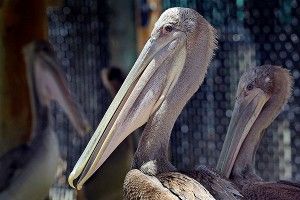 My joy in this decision is less a result of believing the Hornets name needs to be back in Charlotte where it belongs (really, guys? “Bobcats.” Why not pick something you’re known for, like the “Charlotte Airport Rocking Chairs”) and more from the fact that pelicans are incredible animals and the perfect nickname for a franchise trying to find its proper identity. In the interest of time, here are 17 no-brainer reasons why I’m #TeamPelican and you should be too.

1. Louisiana is the “Pelican State.” Why is that?

2. Louisiana’s official state bird is the brown pelican, which is native to Louisiana. The bird is also on the state flag and state seal.

[Note: From here on out, anything that sounds moderately knowledgeable about pelicans is information from the Wikipedia page titled “Pelican.”]

3. “Pelicans are a genus of large water birds.”

Guess what New Orleans is next to? WATER. I know very few connections between hornets and water. Actually, I don’t know any. Hornets probably can’t even eat a praline in one bite.

This pelican behavior sounds like something you would want to preach to a basketball team. I might leave out the “breed colonially,” but hunting as a team, all in the name of winning basketball games? That’s the kind of animal I want in my corner. #TeamPelican

5. This scene from Scarface:

I’m assuming half the reason for changing the name is to loop this on the JumboTron before games. Until told otherwise (in a memo on official team letterhead), I will continue to believe this.

5. “The relationship between pelicans and people has often been contentious.”

So what? This isn’t a game we’re talking about. It’s basketball. No one’s here to make friends. Sometimes, things get contentious. Deal with it, humans.
Xoxo, Pelicans everywhere.

6. “The birds have been persecuted because of their perceived competition with commercial and recreational fishers. They have suffered from habitat destruction, disturbance and environmental pollution, and three species are of conservation concern.”

Oh. So that’s different. I thought pelicans were just flying into people’s homes, knocking over vases and stealing trophies. Well, this is even more reason to be pro-pelican nickname. Pelicans have chips on their shoulders against non-pelicans, a.k.a. LeBron James and the rest of the NBA. Hornets don’t buzz around with chips on their shoulders. All they do is sting people and jet. Seems rude.

7. “The pelican can keep its air sacs inflated by closing its glottis, but it is not clear how air sacs are inflated.”

Exactly. Oh, you think you’ve got the Pelicans all figured out, do you, future Gregg Popovich? Well, guess what — you don’t. You think you understand pelicans, but you don’t even know where to start. Any pre-planning is an exercise in futility. #TeamPelican

8. “[Pelicans] use a phenomenon known as ground effect to reduce drag and increase lift.”

Well, doesn’t that sound like a phenomenon New Orleans would love to see taken to heart by Al-Farouq Aminu? Less drag and more lift? Yes please.

10. Brian “Baby” Williams, CEO of Cash Money Records, a.k.a. BIRDMAN, is from New Orleans. You really think he’s trying to cheer for (or invest in) a team named after some wasp-like buzzy thing?

Nope. Sure, those aren’t pelicans, but any bird is close enough. Hooray for Birdman. Hooray for New Orleans. YOUNG PELICAN CASH PELICAN BITCH.

11. You know a pelican when you see it. Seriously:

THESE ARE ALL PELICANS. AND I DIDN’T HAVE TO TELL YOU THAT.

You have never confused it with an eagle or a dove or a flamingo or a helicopter. Hornet? Not so much. I’ve screamed “ahhh, a hornet, RUN!” before, but it definitely could have been a bee, a wasp, or a yellow jacket. I don’t know the difference. I just know I hate them all. Why not have a distinctive animal from your own backyard, New Orleans? You deserve that.

12. More persecution: “Pelicans have been persecuted by humans for their perceived competition for fish, despite the fact that their diet overlaps little with fish caught by people.”

So basically, non-Pelican fans are haters just for the sheer fact of being haters. If I’m a fan of a team, I want them always feeling like they’ve got something to prove. You know, very Me Against the World. When Tupac made that album, he made it about pelicans.

13. It doesn’t stop: “American White Pelicans were clubbed and shot, their eggs and young were deliberately destroyed, and their feeding and nesting sites were degraded by water management schemes and wetland drainage.”

Who knew pelicans had it so rough? Maybe this will put everything in perspective for the players. “Yeah, we’re on a 12-game Pelican losing streak, but at least we’re not, you know, pelicans.”

14. This 1910 limerick, which could be like the seventh-inning-stretch, “Take Me to the Ballgame” of Pelican home games:

A wonderful bird is the pelican,
His bill will hold more than his belican,
He can take in his beak
Food enough for a week,
But I’m damned if I see how the helican.

15. This piece of pelican mythology:

“The pelican, formerly a black bird, made a canoe during a flood in order to save drowning people. He fell in love with a woman he thus saved, but she and her friends tricked him and escaped. The pelican consequently prepared to go to war against them by daubing himself with white clay as war paint. However, before he had finished, another pelican, on seeing such a strange piebald creature, killed him with its beak, and all such pelicans have been black and white ever since.”

The point I was trying to make about this being a good thing loses steam toward the end, but at least pelicans have myths associated with them. Hornet myths are few and far between.

“It was depicted in art on the walls of tombs, and figured in funerary texts, as a protective symbol against snakes.

“References in non-royal funerary papyri show that the pelican was believed to possess the ability to prophesy safe passage in the underworld for someone who had died.”

I can’t really connect this to Anthony Davis averaging a double-double next season, but just know pelicans are incredible.

17. One fact about Hornets: They “feed themselves on nectar and sugar-rich plant foods.” Oh, you mean the Lamar Odom diet.

Yeah, I’ll take the animal that stays eating only the most ballin’ of fish over the fat kid with cavities any day.

The Pelican naysayers are out there and will be loud, but just know that they are (1) wrong, and (2) not informed in the majesty that is the pelican. Use this text to educate the masses. God bless the future New Orleans Pelicans, and here’s to hoping Charlotte becomes the Hornets again in a few years and reissues the ’90s Starter jackets, thus ending all of the world’s conflicts, famines, and rap beefs.