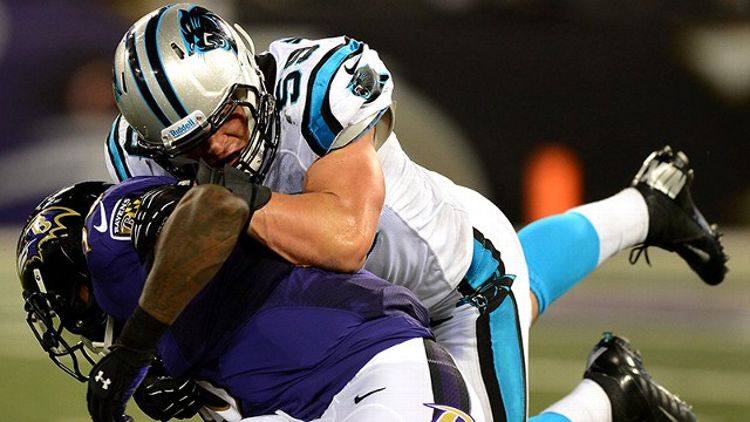 Before you say anything, no, 101 days into this countdown, I’m not losing my mind (OK, losing, probably — but it’s not totally gone). I know that we’ve already brought up Luke Kuechly as a reason to be excited about this football season. Being the Defensive Rookie of the Year last season was enough. But did you see what this guy did last night?

I get that it was the preseason — and that the preseason is a place where the Patriots get eviscerated by the Lions — but what Kuechly did against the Ravens would’ve been worth mentioning if it happened in a Wednesday-night, coed flag football league. In less than a half, Kuechly forced Joe Flacco into an errant throw that was intercepted and returned for a touchdown; hit Bernard Pierce four yards deep on the backfield (on a play in which Kuechly was not blitzing), causing a fumble that was returned for a touchdown; pasted a Ravens wide receiver coming over the middle, resulting in an interception that was waived off because of a penalty but shouldn’t have been; and followed that up with an interception of his own. Again, this was in one half.

It’s not rare to see linebackers succeed as tackling machines early in their careers. Last season, four of the top 10 tacklers in the league were rookies (Kuechly, who finished first; Tampa Bay’s Lavonte David; the Colts’ Jerrell Freeman, who’d spent three seasons in the CFL; and Seattle’s Bobby Wagner). Where players like Kuechly are likely to see the typical first-to-second-year jump is in the other elements of the position, most notably in pass defense. There’s often a better understanding of where they fit in relation to the other pieces, and it leads to the type of anticipation-based plays Kuechly made last night. The fumble-causing hit on Pierce was especially head-turning. Kuechly reads the play before the ball is even snapped. I think everyone expected Kuechly to be a star coming out of college — that’s typically what you’d expect out of the ninth pick in the draft — but if last night is any indication, I don’t know who figured he’d be this good.