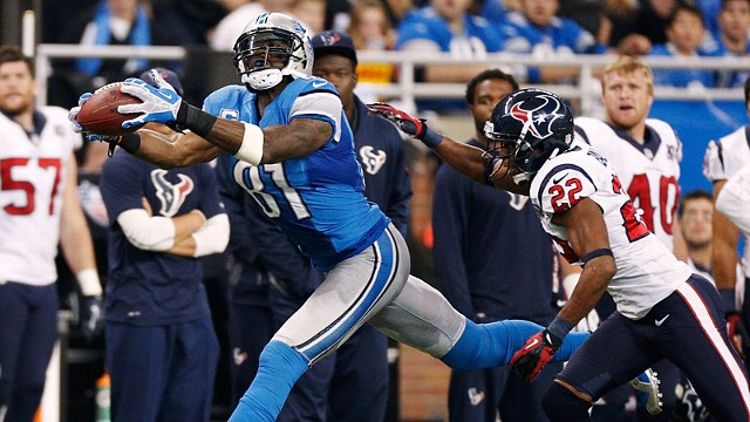 This morning, Calvin Johnson reportedly confirmed something that we’ve sorta known, but not really known, for a few months. Then he didn’t. Right now, we know this much: For a significant portion of a season in which he broke the single-season record for receiving yards, Megatron played with at least one messed-up finger.

Now, as others have noted, broken fingers for wide receivers are not uncommon. Torry Holt looks like this. Antonio Freeman can’t wear his Super Bowl ring because notorious asshole/finger-breaker Brett Favre ruined his hands.

That said, Calvin Johnson still came 36 yards short of 2,000 with some dingy digits. Have you ever broken a finger? I have. It hurts. Have you ever felt a football? I have. It’s hard. This would be an uncomfortable arrangement even if Chad Pennington were the Lions quarterback. To be clear, he is not.

Really, I’m just using this fingers stuff as an excuse to post the above YouTube video and remind everyone that Megatron is Megatron, and he is barely real. This may be a product of my Bears-fandom-influenced desire to discount any success from other NFC North teams, but somehow I feel like Calvin Johnson is still underrated. Considering he was no. 3 on NFL Network’s player-voted list of the 100 best players in the league a year ago, I don’t know how that could possibly be true, but again, those are my issues.

Outside of the quarterback upper class (Brady, Brees, Manning, Rodgers), there is no more influential offensive player in football than Johnson, and it’s that status as the ultimate threat that actually makes his accomplishments more impressive. For almost the entirety of his career in Detroit, Johnson hasn’t just been the Lions’ primary offensive option — he’s been their only one. When Johnson had 1,300 yards in Detroit’s 0-16 2008 campaign, the Lions’ no. 2 wide receiver was Shaun McDonald — with 332 yards. In 2011, it was Nate Burleson. Even if Nate Burleson hasn’t played for your team, he has. Last season, it was Titus Young. And that’s all I will say about that.

That’s saying nothing about the five-headed Shaun Hill–Dan Orlovsky–Daunte Culpepper–Drew Stanton–Jon Kitna monster that’s started at quarterback for more than half of Johnson’s career games. Johnson’s numbers may be inflated by the Lions’ pass-happy approach, but they’re deflated by everything else. His past two seasons stack up with any 32-game stretch ever, regardless of era, and with 10 working fingers, I can only imagine this year will be more of the same.

Graeme Disses Rory: Five Points of Interest From the Weekend in Golf