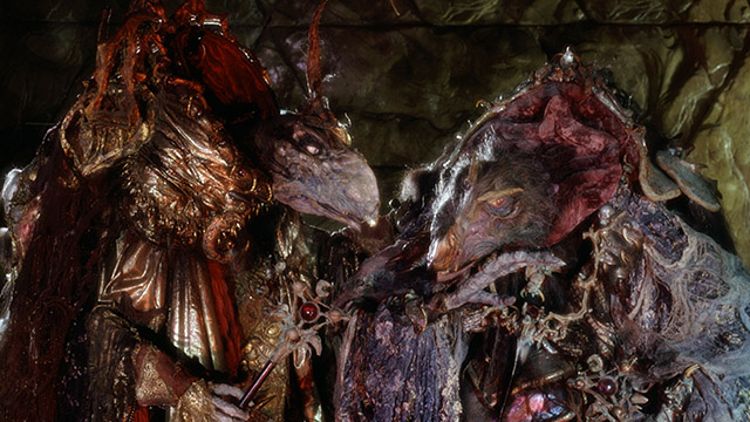 No matter how mixed (or just plain nauseated) the early reviews for the film are, the release of The Hobbit this weekend really just means the return of Gollum, one of the more memorable non-human characters in recent film history. Add at least one dragon into the fray and more dwarves than you can throw an ax at, and The Hobbit could very well end up being reminiscent of the old-school creature features of (some of our) youths. Join us as we take a look back at some of our favorite film and TV beasties, in all their lo-fi, animatronic, puppeteered, fur/glue/latex glory.

The Fraggles, “Let Me Clear My Throat”

Mark Lisanti: A Fraggle Rock movie has been in development for, uh, roughly forever, and if it ever happens, great. Bring us to that movie. But why isn’t there a new Fraggle Rock show on my television right now, doing stuff like this, wiping the scourge of Glee from the face of the earth? There is no satisfying answer to that question. There is only the profound sadness of what could be (the eradication of Glee and the glorious musical ascension of Fraggles).

Andy Greenwald: There are many problems with the “home sick from school” classic The NeverEnding Story — the creepy, prepubescent romance, the just-west of the Iron Curtain location values, the German jazz score — but none more scarring than Falcor, the Luck Dragon. I get that the big beast is supposed to look mythical, regal, and otherworldly. But if you are — as I once was — a generally animal-averse 7-year-old, I cannot stress enough that this thing was fucking terrifying. A giant flying worm-dog that spoke like an oxy-popping Burl Ives and demanded little boys in tunics to hang on to its neck-fur? “I like children,” it slurs in this clip, its nostrils flaring. Then it says, “You were unconscious and you talk in your sleep!” Then it WINKS. More like NeverEnding Nightmare, amirite?!?

The Skeksis, The Dark Crystal

Sean Fennessey: Here’s a great way to remind yourself that within one human is the ability for light and dark. The same guy responsible for the delightfully grotesque, creature-laden scene above also made this musical number happen. If Jim Henson can be this broken and beautiful, so can you.

Dan Silver: Being that I have Kermit the Frog tattooed on my arm (no joke), choosing a creature from the Henson canon should have been a given. But as far as film creatures go, I’m a Stan Winston guy to the core. Not even Del Toro’s Pale Man scared me as much as as the most beautiful momma of them all. Hail to the Queen, baby.

Yoda, The Empire Strikes Back and The Revenge of the Sith

1. In the first clip we have puppet Yoda, regal and all-possessing in his rickety old age, and spewing enough wisdom in eight words to last eight “a long time ago”s. In the second we have CGI Yoda, running around like a damn cartoon cat from a damn cereal box. Damn shame. Also, side note: For some reason I thought Yoda would be as tall as a regular person in the prequels. I was not mentally prepared for him to be wrecking shit at his regular Yoda height.

2. Just the other day I was at this foofy supermarket around the corner from my apartment and saw a little stand of Dagoba organic chocolate. I was so weirded out that someone had named a high-end confection after Yoda’s famously disgusting base of operations that I Wikipedia’d the Sluis sector hot spot to confirm. And I’m glad I did, because then I found these crucial factoids about Dagobah —

Charles P. Pierce: Chewbacca — and why this guy hasn’t endorsed Skoal yet is beyond me — is the only one on the Millennium Falcon with a good read on things. Han Solo doesn’t have the faintest idea what he’s getting into, and Luke is setting an intergalactic standard for callowness that he will not overcome for almost two and a half more movies. Chewie sits there, profoundly in the moment, knowing full well the stakes, and very confident in his ability to demolish every human and droid on the ship. But he simply chooses to not do so. Chewie is a very moral Wookiee. I see him as a character out of C.S. Lewis, except with bigger teeth.

Rembert Browne: I don’t care how incredibly welcoming Ron, Natalie, Shania, James, Vanessa, Simeon, and Sara were when they sang the intro to Nickelodeon’s Gullah Gullah Island (1994—98) — not for a second did I feel safe with BINYAH BINYAH in the mix.

NOPE, NOT FOLLOWING YOU, BINYAH BINYAH.

Everything in Return to Oz

Emily Yoshida: Two things I learned after I finally got the courage to watch some Return to Oz clips for the first time in nearly 20 years:

1. The Wheelers are still every bit as terrifying as they were when I was 7, but probably don’t technically count as creatures since they are played by humans and you can see their actual faces (sometimes) [shudder].

2. That’s OK, because EVERYTHING ELSE IS STILL TERRIFYING, TOO.

Seriously, fuuuuuuck this movie. Get it away from me. See you in 20 more years on YouHologram, hopefully while I’m on a yacht sitting in a chair made of money and can’t have my pride hurt by the fact that a Disney film from 1985 still haunts my nightmares.

Bryan Curtis: Anybody else like Dragonslayer? Made by Matthew Robbins back in 1981, when the studios were on a vision quest for the next Star Wars, it has an excellent title creature. We don’t see much of the dragon at first — a claw here, a tail there. It’s almost Jaws-like in its shyness. It reminds you that before CGI, filmmakers knew how to tease. The dragon was created by the great effects artist Phil Tippett, who worked on the Star Wars films and RoboCop. Guillermo del Toro loves the thing so much he has begged for a Blu-ray, and who are we to tell him no?

Michael Weinreb: This explains everything.