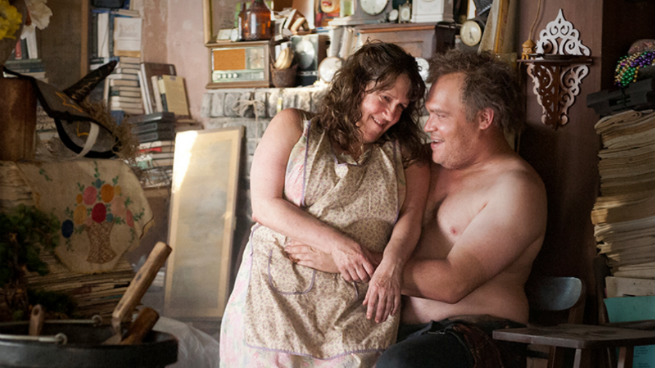 WARNING: Spoilers from Sunday’s season finale ahead; proceed at your own risk.

Who is Errol Childress? By now, we know: He’s True Detective’s serial killer, the white whale responsible not only for dozens of grisly homicides, but also for giving Marty and Rust a headache that lasted a decade and a half. (Never trust the mowing man, and I mean never.) We also learned that Childress was descended from Tuttle stock, that he overcame a speech impediment resulting from his facial scarring by repeating lines from old movies, and that he likes to get down with his half sister (a scene that sounds like it was partially improvised). Everything about Childress screamed “evil,” even when he was just tooling around on his lawn mower or slapping a new coat of paint on the clapboard of a schoolhouse.

Childress appeared in three episodes of True Detective, and after you’d had a few good looks at his face, it was clear that he was familiar from somewhere (and, as many correctly guessed, that he’d play a very important role in the show’s conclusion). After meditating on your thinky crystals (“Hey, crystals, who’s that guy?”), you may have recalled that he was none other than Glenn Fleshler — or, as you were more likely to remember him, Remus. On Boardwalk Empire, George Remus was first introduced as a crony of Torrio’s before quickly becoming a bootlegging enemy of Nucky’s; he’s pompous, silly, and threatening, all at the same time. (You may also have caught Fleshler in the unofficial Boardwalk reunion Blue Jasmine.)

The real George Remus, on whom the character is based, is rumored to have been the model for Jay Gatsby. (He kind of looks like DiCaprio, you just have to squint a little.) On Boardwalk, the character swaps “old sport” for another conversational tic: always referring to himself in the third person.

Like many character actors, Fleshler boasts impressive Broadway credits including Arcadia, Guys and Dolls, and Death of a Salesman in 2012. Someone was mean to him about his role in Spring Awakening, but who’s laughing now, theater kid? The Yellow King, that’s who. Fleshler has the presence of a classically trained performer who’s learned to play to the back row even when he’s standing silently, and maybe that’s why his gaze has an intensity that lends itself equally well to cops (he’s played Detective Trammell on Damages, a deputy in the short The Shovel, and had a small role as a corrections officer on Law and Order: SVU) and criminals (Boardwalk, True Detective, Pavel on Delocated, and, though it has nothing to do with his eyes, it’s worth mentioning that he voiced Timur for Grand Theft Auto: The Ballad of Gay Tony).

Fleshler — who doesn’t have a Wikipedia page or an IMDb bio — has been accumulating credits steadily since 1998, the year he appeared in both Sex and the City and A Price Above Rubies, which coincidentally featured characters named Shmuel and Schnuel, respectively. (Fleshler played only one of them.) The past few months have been eventful for Fleshler, because along with playing Childress, he’s featured in God’s Pocket, John Slattery’s directorial debut and one of Philip Seymour Hoffman’s final films. That was probably pretty heavy on a personal level, and right on the heels of him getting into the head of a deeply disturbed villain for True Detective. Fleshler recently told Vulture that he went to bed “in tears ’cause it was so painful to think about the big picture” of Errol Childress’s life. (The actor was so consumed with the Childress that he went on to say that “all the acting I’ve done over the last 25 years or so has been training for [that] role.”)

Behold Shmuel, a “Hasidic folk artist from Brooklyn,” who captivates Charlotte with “his talent, his strangeness, and the smell of his wool.” If Paul Kinsey on Mad Men had only had different religious inclinations (and the corresponding hairstyle), they could have been twins. Even playing a Sex and the City plaything, Fleshler was mysterious and intense — if Charlotte had converted earlier, his career arc may have looked completely different.

So what’s the suggested trajectory Fleshler take from here, riding his IMDb STARmeter off into the cosmos? As brought to my attention by Grantland’s Mark Lisanti, even when Flesher is being friendly, he looks like he might be fixin’ to murgle Maggie Smith — but the poor guy’s just been sprung from playing one of the most fucked-up characters on television, so let’s give him a break. We know Fleshler does accents, and Brian Helgeland (L.A. Confidential) has a British gangster thriller based on the story of the Kray twins that will start production later this year. (Tom Hardy is in talks to play both of them.) Maybe the role of Kray coconspirator Lord Boothby is up for grabs, because I could totally see that. If age-appropriateness and filmic curses were of no importance, I’d even gun for Fleshler to give his take on A Confederacy of Dunces’ Ignatius J. Reilly — back to the bayou you go, Fleshler, directly into another delusional Southern man’s brain (but not a bloodthirsty one, this time).

If we decide not to worry about Fleshler’s emotional well-being and force him to be tortured forever, though, we’re presented with another interesting possibility: Fleshler being cast in some capacity in Cary Fukunaga’s It remake. Though he’s probably out for Pennywise — despite Fleshler’s earning some name recognition for True Detective, someone better known will most likely land that role — he’s proven to be a mighty contender among creep-givers, and my hope is that his performance will lead Fukunaga to insert him into a story whenever possible, the singular Coen brother to Fleshler’s Steve Buscemi.

So now you know who that guy is. Go eat your hotcakes.

Freak Show & Tell: Kelsey Does Not Need Your Forgiveness

The Movies of ’94: Watching ‘Four Weddings and a Funeral’ for the First Time