What Might This ‘Seinfeld’ Reunion Jerry’s Teasing Actually Be? 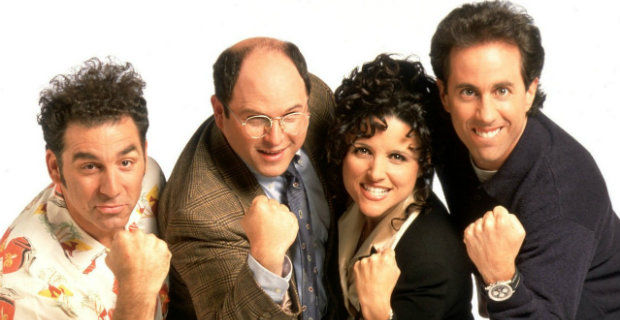 You can hear it in the lines outside of movie theaters, in the banquettes of Mendy’s, on erotic journeys from Milan to Minsk: It’s the sound of nothing stirring. Earlier this month, Jerry Seinfeld, Jason Alexander, and Larry David were all spotted filming a mystery project at Tom’s Restaurant in Upper Manhattan, the facade of which was made famous for nine seasons on Seinfeld. Early speculation suggested this was a Super Bowl commercial, or perhaps three old friends taking a highly public trip down memory lane. But yesterday morning, in an appearance on local sports radio station WFAN, Jerry dropped a giant Junior Mint of news: This was a “one and done” project in which he and Alexander (and possibly others) would be playing their Seinfeld characters. He added that, whatever it was, it would be available “very, very soon.”

Personally, I’m of the opinion that the Seinfeld quasi reunion staged on David’s Curb Your Enthusiasm a few years ago was perfect, an utterly brilliant way to comment on and indulge in the rich vein of nostalgia that makes extra servings of beloved properties so much better in theory than in practice. That said: More Seinfeld! Since Jerry isn’t talking (at least to me — he’s talking plenty to Tina Fey) and I have a feeling that “very, very soon” might mean “this Sunday,” let’s run through some purely speculative possibilities, shall we?

2. Seinfeld denied that his meeting with Alexander was for an episode of his highly entertaining web series Comedians in Cars Getting Coffee — though if he were to film an episode with Alexander, then wouldn’t Tom’s have to be the location? It’s not like they’re going to go to Poppie’s. But just because Jerry Seinfeld wasn’t filming a web series at Tom’s, it doesn’t mean “Jerry Seinfeld” wasn’t filming a web series. Isn’t it possible that the fictional Jerry — now super bored what with Kramer’s PR trouble and Elaine becoming the second-most powerful person in the free world — has taken to the Internet to kill time between bowls of cereal and breaking up with girlfriends? And that the bit with George was merely the prelude to what was actually a full day of tooling around Manhattan interviewing Kenny Bania? No? OK, then. I’ll stop.

3. The @SeinfeldToday IPO went much, much better than any of us expected.

4. NBC Entertainment chairman Bob Greenblatt’s birthday is coming up and, after a rough few weeks in the ratings and in the PR department, his peers and pals in the industry thought he could use some cheering up. The best way to do it? With a prank, of course! (Trust me, the guy who green-lit 1600 Penn has a great sense of humor.) My thinking is that CBS boss Les Moonves was hosting one of his legendary unicorn barbecues on the aft deck of the S.H.I.E.L.D. helicarrier when Tupac Shakur wondered aloud why Seinfeld wasn’t on the air anymore. This got Les and Jerry talking and, after dropping ’Pac off at his condo in Atlantis, the two hatched a foolproof plan: They’d film a brand-new, hour-long episode of Seinfeld and run an ad for it during the Super Bowl. Here’s the kicker: At the end of the ad, it would say, “Coming to CBS Thursday nights, this fall.” And then there’d be an image of Jerry, Elaine, and the gang being joined by their new neighbor, Jon Cryer. You can practically hear the laughter coming from Universal City already! It only sounds like sobbing!

5. All jokes aside, NBC has actually found a way to make it 1997 again, either through science or magic. Crank up the Verve Pipe, dudes! The Yahoo! stock’s on me!