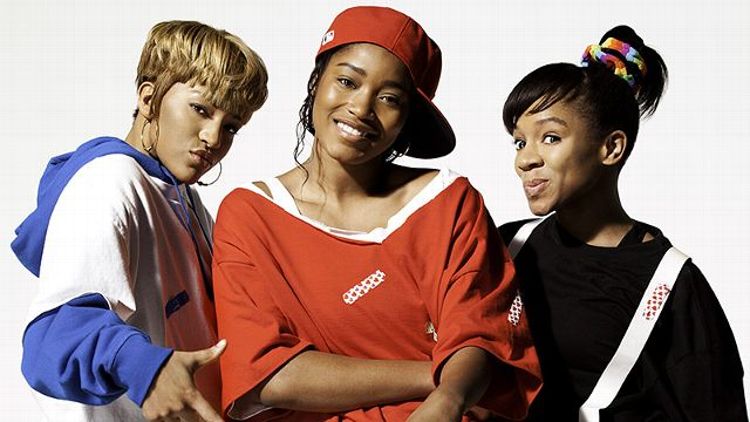 It was a brief bit of dialogue in the first five minutes of the movie, but it represented the difficulty of making a biopic about TLC in 2013.

Friend: Well, Pebbles is starting her own label here in Atlanta.
T-Boz: You talking about Pebbles as in “Don’t You Want to Ride in My Mercedes Boy” Pebbles.
Friend: You know I can hook it up. You know I do Pebbles’s hair right? Pebbles is married to L.A. Reid of LaFace Records. They’re killing it in Atlanta.

All of the statements delivered in this conversation were true. Pebbles was starting a label called Pebbitone; she is the Pebbles of ’80s hit “Mercedes Boy”; she is married to L.A. Reid, the cofounder of LaFace Records; and all of this took place in Atlanta, Georgia.

But chances are at the time that this ATL-esque skating-rink conversation happened, no one eager to break into the music business in Atlanta needed to be briefed on Pebbles, L.A. Reid, or LaFace. And fast-forward more than 20 years later, only a small percentage of viewers need to have every explicit TLC-related detail spelled out for them.

Because so many of us know this story. CrazySexyCool: The TLC Story is the fourth time we’ve been down this road.

Consider another VH1 biopic mainstay, The Jacksons: An American Dream: Even the casual fan can guess what will be covered at certain points of the film because of the popularity of the family and, most notably, Michael Jackson.

Before the first of many viewings on subsequent Thanksgiving afternoons, you can probably guess that there are going to be a lot of beatings by Joe, scenes with the boys and Berry Gordy, something about Michael’s skin, his hair catching on fire in the Pepsi commercial, and the Motown 25 performance.

But even with these checkpoints, which are all covered, there’s a great deal of connective tissue left to make the story feel new.

CrazySexyCool: The TLC Story doesn’t have that luxury because of its evolutionary history, one founded in the early stages of nostalgia music television.

First there were the actual events. The release of the movie coincides with the 20th anniversary of the group’s birth. So the story of TLC is still relatively fresh. Even viewers too young to remember the original introduction of the condoms-and-baggy-clothes era remember certain events taking place: the MTV-dominating music videos, T-Boz announcing she had sickle cell, Left Eye’s untimely death.

But in addition to that, there’s the TLC Behind the Music from 1999, which chronicled the group’s rise to fame, their history with arson, and their struggles through third album, FanMail.

Then, in 2004, there was a second Behind the Music on TLC after the passing of Lisa Lopez.

These weren’t under-the-radar episodes. They were television events. And with two Behind the Music episodes, they join only Madonna as artists to go through the “heartbreak, fame, success, glory, fortune” gauntlet twice.

And now, in 2013, CrazySexyCool: The TLC Story. Version four.

The inherent difficulty in making this film is figuring out how to tell a story that people know so well. How do you provide new, entertaining context for events that have already been well-documented? And in this case, is the goal to simply find three women who look a lot like the real TLC and then just use the linear template laid out by Behind the Music?

Watching it, you could feel the struggle of retelling a repeatedly told story. It was hard to get lost in the film, because you almost always knew exactly what was coming next. The one thing that allowed you to feel like you weren’t watching a rerun of a documentary was focusing on the acting of each woman playing her respective singer. So the performances of Niatia “Lil Mama” Kirkland, KeKe Palmer, and Drew Sidora became the focal point of CrazySexyCool.

The acting was hit-and-miss. But the resemblances of each actress and her singer ultimately made the film watchable, especially Lil Mama as Left Eye. The initial announcement of her casting as the outspoken rapper was met with question marks and frowns. The last we’d seen her, she was rushing the stage at the 2009 VMAs, much to the dismay of Jay Z, Alicia Keys, and the United States of America.

But she nailed it. In each stage of Left Eye’s career, she had you temporarily convinced you were looking at the real artist, most notably in the now-ominous home movies Lopez took during her travels toward the end of her life.

In addition to uncanny resemblances, and of course the soundtrack, CrazySexyCool: The TLC Story did have one other thing going for it: the introduction of a true movie villain in Perri “Pebbles” Reid.

Her legacy as one of the music industry’s supreme bamboozlers has intensified over time, fully bubbling over in the biopic.

Back then, the Behind the Music episodes never discussed TLC’s finances in detail. The band members claimed they were getting ripped off by Pebbles in Behind the Music, but we never knew quite how badly. But in this dramatized account, the filmmakers (and the group’s surviving members, who were producers on the movie) are able to blow it up as large as they see fit.

You don’t get any of that in the three other iterations of the TLC story. So the tactic of attaching a villain to the story worked in everyone’s favor. Well, everyone but the still-living (and tweeting and suing) Pebbles.

CrazySexyCool: The TLC Story did not need to be made. Its story is etched in the annals of ’90s nostalgia. The fact that I knew there would be a line about Lisa not seeing any “size fours” on the bed, causing her to go full-arson on Andre Rison’s house, is proof that this wasn’t an underreported tale.

But its existence is a welcome tribute to a group whose influence continues to be overlooked. TLC is the second-highest-selling female group of all time, with 65 million records sold. Its members are idols to women young and old around the world, and creators of a sound and style that lives on today. They defined the ’90s as much as anyone.

So even if it means we’re temporarily thinking and talking about and listening to TLC in 2013, I say CrazySexyCool is worth it. TLC is a legendary group, even if it isn’t treated as such. It’s clear that Tionne “T-Boz” Watkins and Rozonda “Chilli” Thomas are in the slightly vain business of legacy-building. But it’s completely deserved.