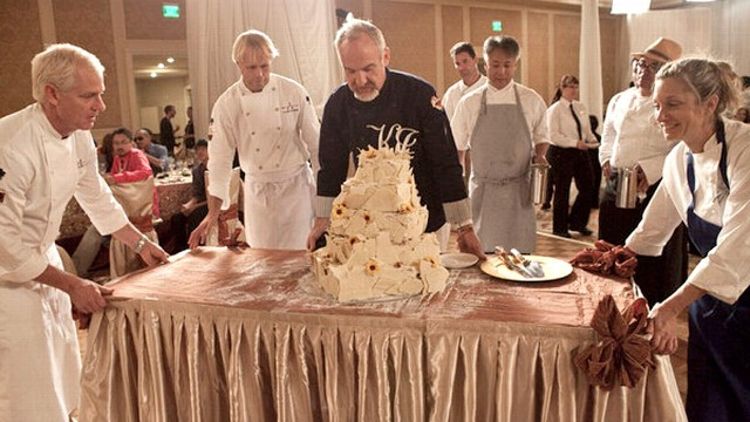 There is something sort of melancholy about Top Chef Masters. Maybe it’s because Curtis Stone axes the contestants so casually in comparison to Padma Lakshmi’s Pietà-like “Pack your knives and go,” or maybe it’s just because there are more seasoned veterans with more on the line than in rookie TC seasons. Failing to impress people with your cooking can feel really rough. Sometimes it seems as though “Streets of Philadelphia” is playing when the herring doesn’t cut the mustard, there are children seated at televised tables spitting into napkins, and some popular restaurant somewhere loses two more Sunday reservations. And everybody’s playing for charity, instead of being driven by their own greedy funtimes. And it’s set in Las Vegas. Who can eat at a time like this?

In last week’s premiere, Missy Robbins went home for 127 Hours-ing her finger and Sue Torres, as Curtis poetically VO’ed, “crapped out with her Indian spiced chicken” in buffet wars. That leaves us with Art Smith (friend of Oprah), Chris Cosentino (my money’s on this guy), Clark Frasier and Mark Gaier (blond lovers-not-brothers), Takashi Yagihashi, Thierry Rautureau (last seen in Season 2), Patricia Yeo, Taco Bell consultant Lorena Garcia, Kerry Heffernan, and Debbie Gold. Got that? My crystal recapper’s ball has informed me that this season will feature tension between Art and Chris, and that it will always be Art’s fault because he’s fresh off a 100-plus pound weight loss and is obviously feeling spicy.

Episode 2 starts on an uplifting note: a wedding! But not a wedding without a parade of saddiebears, because Christine and Jay had to reschedule once due to the death of the maid of honor, and then again when the restaurant they’d secured with their deposit “disappeared.” Black and whispering as the rain. No other course of action exists in circumstances like that other than to have your event catered by a bunch of people under a lot of pressure and attended by a camera crew, so the chefs get six grand and 24 hours to throw together one dish apiece, loosely Filipino-themed as per the couple’s request.

Blood soup makes the cut: bold. Lorena and Art bond over their shared astrological sign (Pisces, obviously), so maybe she can mediate between Art and Chris like a fluid fish might do. A selection of the chefs are goaded into sharing photos and anecdotes from their own weddings: Art’s party was 500 or 600 deep and everybody had to run to the Lincoln Memorial (he’s still wearing the sneakers — also that wedding sounds kind of like my personal hell, but fine); Chris catered his own; Thierry’s featured a cake the name of which I can’t be bothered to decipher and let’s be honest, it really doesn’t matter.

The point is that weddings are stressful to cater and now everyone’s at the grocery store calling each other on cellular phones in states of serious distress because there is no green papaya and there is no green mango. Debbie’s dish was supposed to be a green fruit spectacular, and she’s left scrambling with just, you know, some vegetables. Meanwhile, somebody forgot the pork belly with five seconds left to shop, so Chris (my man! DO IT, CHRIS) jettisons himself over to the butcher counter, orders the belly, then sends it sailing through the air to Takashi, who hurls it onto the conveyor belt of the register in a great photo finish. Sadly, some cans of crab don’t make it, and throwing them could have been deadly — Kerry will have to improvise.

There is always the issue of the cake: What fool will fall on his sword, having to hastily construct a gazillion-layer dessert that everyone will stare at and be nasty about, as the judges always do on Top Chef? In this case it’s Art, whose confidence is bolstered by the fact that he recently put together a pineapple upside-down cake for Lady Gaga’s 25th birthday. Chris is using an oven that Art requires for his white-chocolate postmodern masterpiece, and everyone gets cranky for a second but then it’s back to business. The wedding ceremony happens over the course of two seconds so as to not remind us of the aching despair of the “disappeared” deposit and the passing of the maid of honor, then we race onward to the reception with food.

Thierry’s blood soup and Patricia’s mackerel ceviche sounded risky, by which I mean disgusting, but — surprise, surprise — everybody slurps ’em down like they were teeny tiny doughnuts glazed with something not-blood-not-mackerel. Another big hit is Takashi’s formerly airborne pork belly, but duh because it’s pork belly. Less successful: Mark’s undercooked salmon and Debbie’s charred cabbage salad, which the judges react to as if it were vegetation from Mars. They inspect it and marvel at its strangeness, with only the Quiet Terminator coming to its defense during deliberations. The question is, can you trust the palate of a man whose recipe for a “nectarine and raspberry sundae” lists as its only ingredients nectarines, raspberries, and Greek yogurt? No. You cannot trust that man.

The cake, predictably, falls apart while Lorena’s dishing out her flan and the judges rub their hands together like mean little flies waiting to tear into poor Art about what they know already will be a sad affair of a statement dessert. Art scrambles to put it back together with his hands as the other chefs race into the basement for more icing to spackle the monument, but the thing lists haplessly to one side — plus the pineapple, we later learn, has failed to caramelize. Like every other dish, the bride and groom don’t give a hoot and are just happy to have finally gotten married and been served food (bride raved about the cake; at least it hadn’t vanished into thin air because, and I still can’t get over this, restaurants and the cakes they serve can do this), so the judges simply ramble on about the refunds they would have demanded if that had been their wedding cake and how pissed they’d have been to cut into that gloppy monster, etc etc. Point taken! The cake was not awesome! Give the man a break. He’s tired; he’s on a diet.

Chris (nice adobo, bro), Takashi, and Patricia emerge victorious, and if you can believe it, Patricia’s mackerel ceviche takes the prize and lands her 10 grand for her charity, Heifer International. Yep, that funky pickled fish in a spoon was the Miss America of the evening. This is why we need Taste-o-Vision: I cannot believe it. The losers, of course, are Debbie and her alien cabbage, Mark’s unintentional salmon sashimi, and Art’s cake. Art sweats and takes the beating. Mark looks so sad during this critique that I don’t want to remember it, going through some assorted stages of grief while he hears about the temp on his fish: denial, acceptance, terminal paleness, wincing squints. I couldn’t bear to see him go after looking so sad, and luckily I didn’t have to, because it was Debbie’s time. “Eeny, meeny, miney … it’s me,” she announces to her competitors, probably because she was so depressed she forgot the rest of the lyrics.

Next week: Something Benihana-ish, which should be jolly, but of course, one never knows.