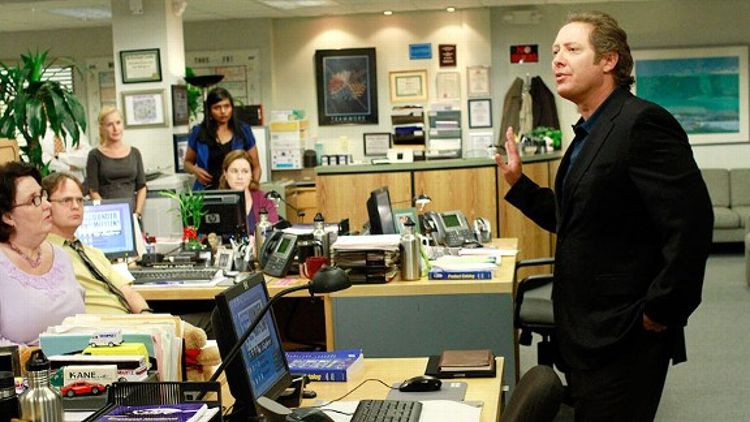 1. The Office
Since inaugurating this column two weeks ago many sheafs of Dunder-Mifflin’s finest have been filled with thoughts and theories about The Office’s predicament, the impossibility of being a long-lasting (and thus change-averse) sitcom undergoing a season of fundamental change. Through two episodes, the show’s strategy seemed to be lifted from one of the intensive Krav Maga classes Dwight was taking back in the premiere: a lot of feinting and jabbing and very little forward momentum. James Spader arrived, was effectively neutered, and vanished back to corporate (for now). Ed Helms’s Andy Bernard was elevated to the manager’s office but kept one foot in the cubicles, sporting the same striving anxiety that had both defined and limited him as a character. (The other foot he kept in spats.)

But it’s not fair to assume the worst about The Office: time and time again the behind-the-scenes braintrust has proven itself able to make the smartest decisions possible in the service to the show. In the abbreviated first season, necessary tweaks were made to transform Steve Carrel’s Michael Scott from a snivelling Ricky Gervais-lite to a more sympathetic buffoon, thus paving the way for a character initially conceived as a parody to become something approaching a hero. When the Jim and Pam flirtation reached its apex, the producers bit the bullet and married them off — an aggressive play that may have cost them a few seasons worth of rollercoastery story but only helped strengthen the sneaky core strength of the show: silly things may happen, but adults are in charge.

And so, in “Lotto,” The Office made a definite attempt to wrestle with an unspoken reality that, ‘til now, has mostly been slid under the rug as smoothly as a box of paper on Kevin’s freshly-greased warehouse floor. That reality: these people are frozen, stuck in papercut-riddled cul-de-sac in Central Pennsylvania, with any hopes, dreams or plans crushed or abandoned somewhere back on the long, lucrative highway to syndication. The trigger for this self-reflection came in the form of dumb luck: the warehouse workers have won the lottery (by playing Darryl’s birthday, no less) and, demonstrating a canny understanding of the country’s larger economic woes, promptly quit en masse. As Jim, Dwight, Kevin and the increasingly essential Erin (“You need to drop it! They hate it, OK? I like it a lot, but they hate it.”) undertook a series of very silly set-pieces involving forklifts and industrial lubricant, the financial windfall (and subsequent liberation) trickled through the office. The boldest play here was having Jim and Pam take it so intensely: within moments he was audibly daydreaming about kayaking in Maine while she envisioned a copper-potted big city Nancy Meyers fantasy involving art classes and brownstones in Soho (Ryan: “Soho’s mostly lofts, but OK.”). The goal here was clearly to allow Jim and Pam to dream impossible dreams while still loving and appreciating their situation (and each other) but it landed with a duller thud than Kevin on the slippery floor. The moment these settled characters have their horizons broadened, they cease to work as plausible protagonists. It may be a fiction that Jim and Pam have no greater life goals than playing tired pranks and catching the occasional Penguin game but it’s a fiction we’ve all agreed to invest in. At least John Krasinksi, who directed the episode, can advance his career behind the camera if he’s unable to do so in front of it.

It’s a different case with Darryl, however, he’s a fresher character and one with resentments that linger like the stale smell of tacos in his formerly nice basement (LOL of the night, BTW.) Darryl’s legitimate friendship with Andy has been one of the bright spots to emerge out of the past two seasons and it felt earned and right for it be brought back to the fore here, playing out awkwardly in front of a horde of job applicants, none of whom had the necessary masters degrees in warehouse sciences, but all of whom were perfectly able to snatch Stanley’s lunch. It turns out Darryl (like many television bloggers!) though he had the vacant manager job in the bag only to burn his momentum on Mediterranean cooking classes. Andy inspires him to keep striving — but, really, what’s the point? Nobody is going anywhere — and judging by NBC’s current ratings, not for a long while. “There’re better lives than this one,” Darryl says with real emotion. Maybe. But has he seen the unemployment numbers recently? A steady job is nothing to sneeze at.

2. Parks and Recreation
Book/television tie-ins are nothing new, but I definitely don’t remember Special Agent Dale Cooper flipping through the pages of the Access Guide to Twin Peaks on-air in search of an even better slice of Cherry Pie. So it was a surprise to see Parks & Rec embracing its real-life promotional push for Pawnee: The Greatest Town in America but not an unwelcome one. (Full Disclosure: The book was written by Grantland contributors Mike Schur and Nate DiMeo.) In a tidy, if unremarkable, half-hour the show neatly skewered NPR (shout-out to David Bianculli!), the birther movement, gotcha journalism, and Oprah’s bookclub. Even better, it featured the return of two of the show’s more reliable jokes: the idyllic, Pottery Barn paradise that is Eagleton (where the people are good-looking enough to be immune to Rob Lowe’s baby blues) and Andy’s Bert Macklin, FBI (“Thought I was dead? So did the president’s . . . enemies.”) On the hair front, things weren’t as rosy. While the repurposed squirrel that had been nesting on Chris Traeger’s head seems to have been trimmed, Ron Swanson’s fake moustache was almost as disturbing as the sight of the man himself forced to do real work instead of whittling a recorder. But Leslie’s closing statements, on the wonders of perfect waffles, was suddenly and surprisingly quite moving and universal. In a small way, we all have our own Nipple Hill, slippery and wet with sweet nostalgia. Or is it maple syrup?

3. Community
“Competitive Ecology” certainly had a lot in it to recommend itself to those heretics turned off by Community’s usual manic tap-dance of references, montages and mugging. The plot was focused, by Greendale standards: the study group has one night to make a diorama but can’t decide how to subdivide itself. Complicating matters is Todd, a brillo-haired Iraq war vet with a pet turtle and the patience of a saint. While the gang contorts itself in a brutal popularity contest, Chang’s z-plot was relatively restrained: a Chandler-esque digression featuring an amusing internal monologue rife with rich analogies (“My own words rang in my head. Like a bell inside my head.) and legitimate queries (“What’s up with buttons?”). But it remains painful to see Michael Kenneth Williams contort himself into a bright orange cardigan and mouth DOA duds about legos. (Is it fair game to point out that Community has a nearly entirely new writing staff this season? I found last season’s zombies a whole lot less problematic than jokes about “homeopath” sounding like “homosexual.”) I sat there wishing for Kenard to arrive as a transfer student, ready to put Williams out of his misery for a second time.

Still, the show is at its best when the study group merely interacts with one another and plays off character instead of pop culture: Jeff tweeting about the Ben Sherman winter collection, Annie confessing to a love of worms. But laughs retained a bitter bite: everyone comes together at expense of poor Todd, a pleasant zero who had to carry the episode’s only quasi-emotional beat, and then bear the brunt of the study group’s frustration. Sad Professor Omar was right: they really are the mean clique.

4. Whitney
Or so I thought. Last night, while watching Whitney open its third episode with its third straight gag about role-playing sex games, a simple question raced through my head: who the hell are these people? Because with their nonstop barrage of sour banter, their predilection for bland, brightly-lit watering holes, their need to hang out with wildly misogynist “friends” with whom they have no chemistry or apparent shared history, they certainly don’t code as humans. And more than anything else, that’s why Whitney is such a truly terrible fit for NBC’s human-centered Thursday night of comedy. (Another reason? It’s truly terrible.) Whitney and her “friends” are mean, digging into each other with hopeless, hateful abandon as they make toothless observations about MSG in Chinese food and supply a steady stream of sub-Seinfeldian cultural commentary (“What’s the deal with acaì berries, anyway?”). People initially harshly judged Whitney in some part due to unfamiliarity: what did this noisy, multi-camera interloper think it was doing setting up shop on the outskirts of friendly Scranton? But now after three episodes, the vitriol is earned. The show is about the uninteresting disagreements between miserable people. At the end of last night, Whitney gets what she wants from her dud dude by giving him a “full female assault”: crying and talking about her period. I’m sure I’m not the only one who found her earlier attempt at punishment — the silent treatment — to be sweet, sweet relief.