The ‘Yo, Is This Racist?’ Month in Racism for April: Our Token Black(face) Friend 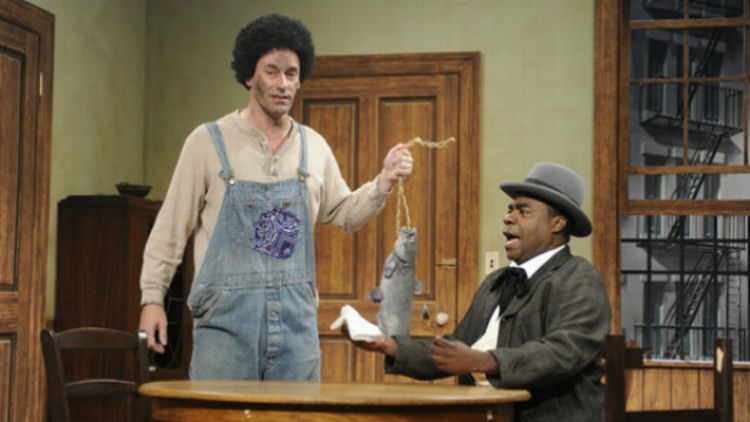 Ok, first up this month is 30 Rock. If you only have five seconds to spend reading this, straight up, all you really need to know is that blackface is wrong. It’s disgusting, it’s racist, and it’s really a pretty irredeemable image (though that doesn’t keep people from pretending it’s theirs to redeem).

But I guess if you’re someone who needs to follow that up with tons of tedious discussion, here’s a clip from the live episode of 30 Rock that we can spend some time talking about:

To make that clear, America’s White Dad/Husband Jon Hamm rocked blackface to parody Amos ‘n’ Andy. In some ways, that’s as close to a responsible satire of blackface as you’re probably going to get on a prime-time sitcom: not too much harping on the actual portrayal (it’s pretty short), it makes it clear (-ish) that there were consequences to the racism and that it’s wrong, and then it sharply ties it to the racism that persists on television today.

But that being said, it, like pretty much all direct satire about racism done in mainstream entertainment, suffers from one critical problem: Most people who see it understand the message, but — surprise, surprise — some people are stupid as fuck.

Which, when it comes down to it, is really the problem with all satire that re-creates racist behavior. In the best-case scenario, the message you communicate to the erudite audience who utterly “get it” is, at best, nothing more complex or noteworthy than “Hey, blackface is bad, homies, man, we used to be racist.” That’s it. The best you get out of the portrayal is a chance to state the (hopefully) completely obvious.

And the downside? As 30 Rock should well know, anyone who’s ever had their lame boss inform them that they “want to go to there” knows that there’s no controlling the context in which your jokes ultimately live. The worst-case scenario is you create something that gives aid and comfort to racists. We already suffer from a rhetoric that shamelessly (and, you know, truly unfortunately) strips all statements of context, so, fairly or not, when you’re playing with racial fire, it does behoove you to use it in a way that pays off proportionately to the risk of misinterpretation. Because no matter how you do it, your smart satire is ultimately always going to be reduced to this:

Yo, Is 30 Rock Racist? Nice enough try, 30 Rock, but you need to get more out of blackface if you’re going to do it.

Everyone’s favorite historical-style drama jam is edging into the ’60s, and with it, the periphery of the civil-rights struggle is coming to Sterling Cooper Draper Pryce with the introduction of Dawn, Don Draper’s black secretary and the first black character to regularly appear in the office. Her (very short) storyline served to play her off against Peggy, to show that even the young and progressive of the time still have many of the prejudices of the time.

Now, in a show that prides itself on presenting flawed characters (let’s not forget Roger Sterling’s own blackface jam), showing a touch of racism in someone like Peggy is hardly out of bounds, but, let’s be real, the fact that it’s at all notable that there’s a black character on the show does highlight a big underlying fact: This show is white as hell.

They Got Two Black Dudes (and That Tribe of Barbarians) on Game of Thrones!

Well, holy moly. There are black people in Game of Thrones. Now that’s a twist we did not see coming.

Here’s the thing. Fantasy has always dealt in stereotype, basically as a convention of the genre. In a sense, Game of Thrones is a handbook of the stereotypes from the British Isles. People from the North be like thiiiiiiis, but people from the South be like thiiiiiis. And, to be fair, the depiction of the Dothraki, the tribe of brown-skinned horse riders, is, at its worst, a patronizing amalgamation of various signifiers of Savages.

Yo, Is Game of Thrones Racist? This might be a case of praising with faint damns, but it generally could be a lot worse. And great job on the casting of Xaro.

How Mad Should We Get About How White Girls Is?

Now that everyone has had a chance to take a beat and calm down from the debate on whether Girls in particular has a problem with race, let’s take a moment to reflect on the opportunity cost of the energy expended on this debate. It’s always a little unfortunate when shows are especially whitewashed, and fine, it’s a little more galling when the show is ambitious and realistic, but there have to be better targets.

Yo, Is Girls Racist? While 2 Broke Girls is still on TV, yo, this can’t seriously make you mad.

Filed Under: 30 Rock, Game of Thrones, Girls, Mad Men, The Month In Racism, Yo Is This Racist?

YouTube HOF: These Are Not the Superheroes You're Looking For