The Real 1989: Echosmith on the Slow-Burning Hit ‘Cool Kids’ and the Upside of Not Fitting In 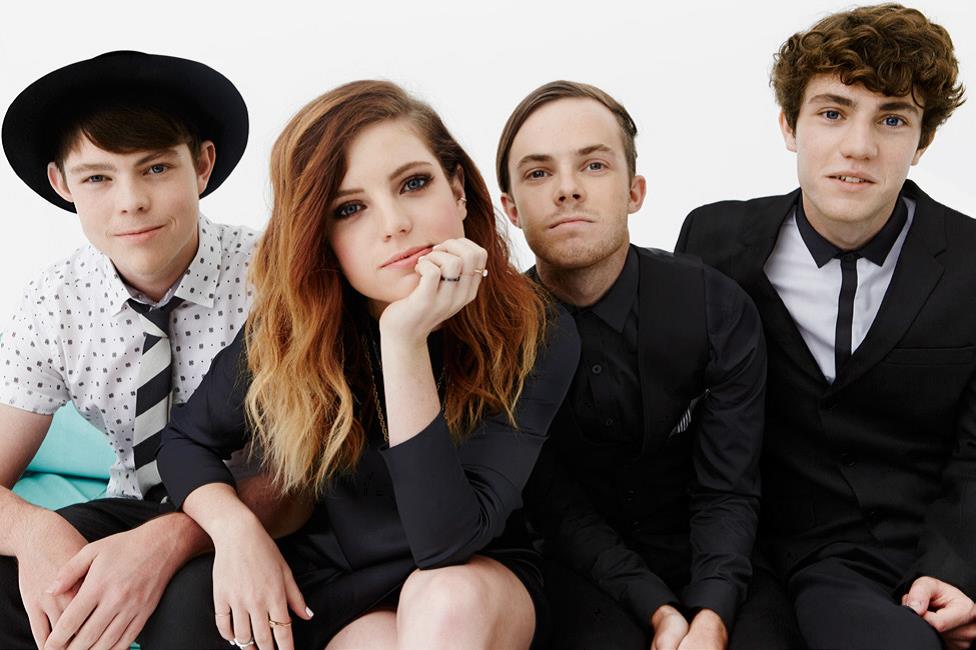 The first time I heard Sydney Sierota sing the chorus of Echosmith’s “Cool Kids,” one of the year’s best and slowest-burning hits, I made two assumptions, only one of which proved correct. The first was that Sierota is a teenager, which is true. (She’s 17.) The second was that English isn’t her first language, which was way off. Like her three brothers, who range in age from 15 to 21 and back her up in Echosmith, Sierota is an L.A. kid raised by a professional songwriter and producer named Jeffery David. There’s just something slightly off about the way she sings that affectingly hackneyed chorus: “I wish that I could be like the cool kids / ’cause all the cool kids, they seem to fit in.” It sounds at first like a goofy interpretation of American youth culture by Europeans, like Nena’s deathless ’80s staple “99 Red Balloons” or one of those old Mentos commercials.

Perhaps I was influenced by the song’s lonely guitar hook and plush synth accents, which recall the rainy-day musical comfort food of The Breakfast Club soundtrack. At any rate, “Cool Kids” instantly drew me in. While Taylor Swift references the ’80s in the title of her latest album, “Cool Kids” better represents what music from that time actually sounds and feels like, while also capturing the singular sensation of adolescent awkwardness as only real-life awkward adolescents can. (That includes gently mangling the chorus of your own anthems.)

Originally released nearly a year and a half ago, “Cool Kids” took the long way to the top of the charts. The Sierotas might be young, but Echosmith is a veteran band, forming seven years ago and gradually working up their instrumental and songwriting chops under the tutelage of their dad, who cowrote every song with his children on Echosmith’s winning debut LP, Talking Dreams. At their first gig, when Sierota was 10, the family band performed covers by the Cure, Rage Against the Machine, and Rihanna. Over time, they concentrated on the moody alt-rock part of the equation, obsessing over the Killers’ Hot Fuss (which qualifies as classic rock for musicians of this vintage) and then working backward to the Smiths and Joy Division.

“Cool Kids” caught on as Echosmith toured endlessly, including two stints on the Warped Tour, where they networked with other bands and pop-punk fans not much younger than they are. The work finally paid off: “Cool Kids” is ensconced in the Top 20 on Billboard’s Hot 100 chart, with sales recently achieving platinum status. (It also ranks among the most streamed songs on Spotify.)

When I caught up with Sierota last week, Echosmith was embarking on its first headlining tour. In conversation, she makes a strikingly different first impression than she does in “Cool Kids” — the average rock dude doing time in an up-and-coming indie band isn’t nearly as savvy or focused.

Your band played on the Warped Tour the last two summers. From talking to other bands, I know how much of a grind that is.

Warped Tour is a crazy animal, and it’s not like any other tour in the entire world. We never had to work that hard in our entire lives. Especially the first year, we would get up at 7 a.m. and walk up and down the lines and walk around the entire venue all day until we played, and then we’d do it after we played, just handing out CDs and pins and all these things just to put ourselves out there. It was a 15-hour day when we only played for 30 minutes. It’s a really crazy thing, but it is a lot of fun. You make so many great friends, and it’s a great way to make fans, too.

Was there ever a part of you that was like, “Most people my age are in high school, they’re having fun, and I’m working so hard right now”?

It’s all about keeping perspective. No matter how great or terrible a situation is, you’re going to have those days. It’s all about how you look at it, really.

Was it disappointing when “Cool Kids” wasn’t an immediate hit?

The past two years, we’ve just been touring pretty much nonstop, especially recently. Because we were doing so much, and getting to watch it grow even just a little bit every day, we kind of didn’t even realize that it took that long. We weren’t at home thinking like, “Oh man, I’m just sitting here and nothing’s happening.” We were working the entire time, so that made the time pass quicker. You’re productive during those times when it wasn’t working as great. Even though we would sometimes play a crappy show, the next day we’d play a good one.

I imagine at some point when you were making this album, you envisioned the point you’re at right now: “What if we had a hit?” Now that you have a hit, what’s that been like?

It’s funny because when we recorded the record, of course you’re thinking, “Oh man, I hope it works. I hope that we play good shows, I hope it gets played on the radio.” But you never really know exactly what to expect. For us, we didn’t even expect “Cool Kids” to make the record. Thank god it did, because as of now, it’s making our career.

Why didn’t you expect “Cool Kids” to make the record?

Well, that song — because we actually relate to it — we didn’t write it because we wanted some hit song or a song played on the radio. We wrote that song because we related to it, and because we related to it so much, it took us so long to do. We were so connected to it — we kept going back to the lyrics over and over again to make sure that it was perfect and said exactly what we wanted to say. I mean, it took a span of six months, and finally we finished and everything worked out luckily. But it almost didn’t make it because it took so long.

Did you write the lyrics?

We all wrote it together, just like every other song on our record. We all write everything. We work with other cowriters sometimes, but it’s always starting with us four, and the basis is our vision. We’re not a band that’s opposed to cowriting in any way as long as it’s our vision.

You said “Cool Kids” took you a long time to write because you related to it. Can you elaborate on that? I assume it’s describing your own experience about feeling out-of-place at school.

Yeah. It’s really just about a boy and girl who want to fit in. Everybody at some point has that desire to be like somebody else. We’ve all felt that way, and I still have to make that decision every day that I’m going to be OK with myself, because, in the end, what does make you cool is being yourself and accepting yourself for who you are and who you aren’t. That’s what we’ve discovered over this time. But I mean, it’s really just a conscious effort and a decision that I have to make every day: “Oh yeah, I’m going to be OK with myself.” It’s still something where you fall into a game of constantly comparing yourself, and it’s endless.

Does that desire to fit in go away at all once you’ve got a hit song? I know you were at the VMAs this year. Did you feel like you belonged?

It’s interesting because our band is very different from so many other artists and bands in so many different ways — the fact that we’re family, the fact that we’re young, the fact that I’m a girl but I’m still being modest in the way that I dress and act and all those things. We’re a very unique band and we know it, and we feel it especially in those situations when we’re at the VMAs or any of these award shows. You kind of just have to decide before heading into the VMAs that we are different and we like being different, and it’s OK with us that we’re different. Even though there are a lot of girls that look a lot different than me, that’s OK.

Of course, in those situations, we kind of stick out like a sore thumb, but hopefully in a good way. A good sore thumb, if that exists.

Undead and Loving It: How Did AMC’s Flagship Show Suddenly Get So Good?