The Parenthood Cry of the Week: Kristina’s Mayoral Dreams (and Merch) 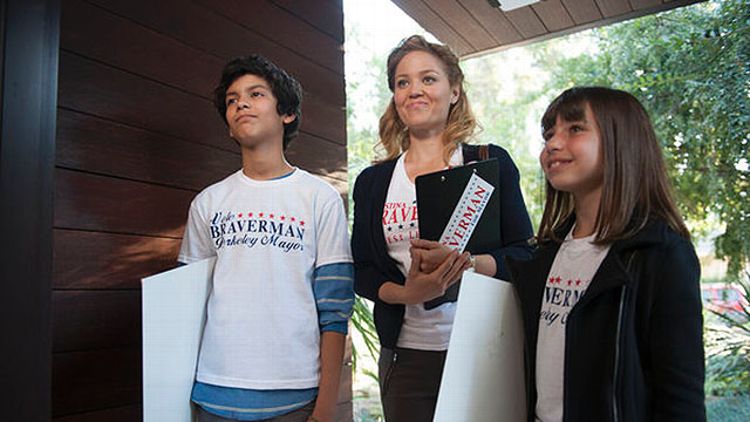 If you’re running for mayor and you’re in last place, you better get some good swag to give out. I guess Heather (Jurnee Smollett) didn’t get that memo, and she certainly did not pass it along to her client. Kristina’s campaign T-shirts looked like they were destined for the trash, not the drawer of historical mementos. Luckily, Kristina found another, and probably more productive, way to differentiate herself from the other candidates by the end. We’ll get to that.

I’m officially worried about this season of Parenthood. It turns out that the drama regarding the Braverman manse is not over yet. But previously we’ve endured Kristina’s cancer, Adam’s unemployment, Crosby’s sudden fatherhood, Julia’s infertility and subsequent adoption process, Amber’s rejection from college, Drew’s girlfriend’s abortion, Sarah’s career crisis, Haddie’s (remember her?) struggle with her special-needs brother — and that’s just a partial list. Now we’re supposed to feel concern over whether Zeek and Camille will sell their house? We’ve been conditioned to care about Zeek and Camille only as advisers to their children. Camille gave great advice to Sarah in this episode, and that’s a function she should not abandon.

In summation, who cares?

Crosby and Jasmine have already overcome their most threatening fights, so they and we are free to enjoy their more quotidian problems with a touch of whimsy — like when the drunk husband needs a ride. This week, Crosby engages in some mild debauchery with the band recording at the Luncheonette to wash away his sorrow over having to buy a minivan. Thus, he’s unable to drive himself home. He calls Jasmine for a ride, which led to my favorite moment of the night. She retrieves the drunkards and takes them to the drive-through, all the while maintaining her radiance. She is the dominatrix of the drive-through, and a solid counterpoint for Crosby.

It seems like there are two major plots bound for climactic eruptions: Julia and Joel’s marital woes and Sarah and Amber’s disagreement over Ryan. Both of these central relationships are currently complicated by interlopers. With the Grahams, we have to worry about Julia’s new friend, the unemployed dad, a.k.a. Roy from The Office, and Joel’s new boss, a.k.a. Penny from Lost. With Sarah and Amber, we have to worry about Ryan, a.k.a. Luke from Friday Night Lights. Can everyone please just return to their former TV universes and leave the Bravermans alone? All this must sound familiar to you because these tensions have suffused every episode this season, resulting in only relatively minor confrontations. This week was more of the same: Julia engaged in borderline emotional cheating when she had a family-style dinner with Roy from The Office, while Joel prioritized work over family. We need these two to have a blowup and then move on.

Sarah continued to fight with her daughter over whether Amber should marry Ryan at all, except instead of just arguing, Amber brushed her hater off and secretly eloped. By the time Sarah apologized, Amber was wed. Sarah doesn’t know yet, though Amber seemed to regret petulantly cutting her mother out of the proceedings. Let us hope this is just one of many regrets to come regarding Ryan. How much longer can he be on this show? Early in the episode, Ryan hatched the elopement plan, though his ineloquence scared Amber into thinking he meant he didn’t want to get married all together. For that brief moment, I was thrilled, thinking we’d be free from this oppressive story line. Alas, Parenthood can’t seem to quit Matt Lauria, though I’d say he is a solid no. 4 on the FNL Alums on Parenthood Power Rankings. (1. Michael B. Jordan; 2. Minka Kelly; 3. Jurnee Smollett; 4. Matt Lauria. Was there ever any question?)

Both of these arcs are hard to digest because of the relationships at stake. We should all be routing for Joel and Julia, Sarah and Amber. In both cases, there was a tight hug to close their final scenes of the episode. In both cases, the hugs belied the tension still to come. Ugh.

Even if you are exhausted by Kristina’s mayoral candidacy or hate her campaign T-shirts, it’s hard to deny Monica Potter. This week she was preparing for her debate with the competition, and she vowed not to bring up Max’s Asperger syndrome for political gain. Then a woman with a deaf daughter asked a question related to how the public schools were failing her special-needs kid. And then, of course, Kristina teared up talking about Max’s struggle. That was emotional, but the most powerful thing she did was walk off stage to hand the mother her phone number. Now that everyone always has their phones no matter where they go, that is powerful information to give out. Using Max as a talking point still seemed vaguely manipulative, but Kristina accomplished her goal of being authoritative yet relatable. And then I teared up.

Video on Demand Report: A Buddy-Cop Bra-mance in The Heat