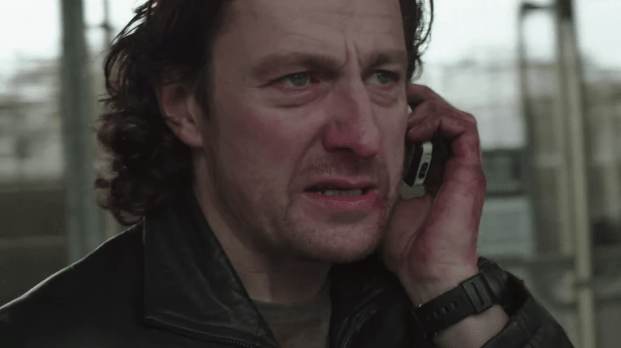 There is no shortage of stories in contemporary film and television that plumb the depths of the human condition. As a matter of fact, you could make a strong argument that writers have plumbed the depths of plumbing the depths. But despite the enthusiasm with which our favorite characters and creators have done dirty deeds — or possibly because of how widespread this has gotten — it’s still the rare piece of art that explores darkness not as a narrative device, but in the pursuit of true and seamless nihilism.

Hyena is a British gangster film written and directed by Gerard Johnson. Over the course of nearly two hours, men are stabbed, hacked apart, and shot; a woman’s rape is depicted in horrifying starkness; the power structures of our society are shown to not only be corrupt, but incoherent; and enough cocaine is snorted to make The Wolf of Wall Street look like Penguins of Madagascar. And by the end, as the camera lingers on Peter Ferdinando’s phlegmy, leaking face, Hyena has done something uncommon: It has frightened you.

Typified by Ferdinando’s crooked but potent police officer, Michael, Hyena’s London cops are so mixed up in the drug-running Turkish and Albanian underworlds that the differences between each camp become less a matter of morality and more who’s pointing a sharp blade at whom. Michael leads a task force that works like a mob syndicate, offering protection to drug runners in exchange for a cut; meanwhile, he and his three amigos drink and snort and smoke like men with a death wish. Eventually, Michael falls under the surveillance of an internal affairs officer determined to bring him down. He’s reassigned to the team of another crooked policeman, David Knight, who’s been tasked with nailing the Albanian brothers Michael’s been working with. Double crosses, power shifts, and violence abounds, with Hyena ferociously working through characters like its own vehicle of justice.

Although Hyena joins a proud tradition of British gangster films, including Layer Cake and Sexy Beast — which rank among some of the most honest, stylish, and vicious movies ever made — it has more in common with the work of an American: Abel Ferrara. Ferrara’s most recent work, Welcome to New York, examines the corruption of the upper class, but his two best movies, King of New York and Bad Lieutenant, deal with the mechanics of the underworld. King of New York explores this bleak environment through the efforts of a mobster played by Christopher Walken, and Bad Lieutenant by way of a cop played by Harvey Keitel. What Ferrara does so well, and what Johnson has declared himself able to do with Hyena, is handle situations in which the forces of evil and the forces of good are one and the same. They are movies deeply suspicious of power and authority, and in the cases of Bad Lieutenant and Hyena, they seem to suggest the corruption of not only the watchman but humanity as a whole. As the Lieutenant and Michael — animals having abandoned any notion of ethics — disintegrate, Ferrara and Johnson don’t just allude to darkness: They paint the screen with tar.

But there’s a purpose to these vile films. First of all, they’re beautifully made. Bad Lieutenant is framed with care and clarity, putting the Lieutenant’s madness in undeniable relief. Keitel plays the role with the dedication of a maniac, so convincing in his insanity that it comes to seem less like acting and more like channeling demons. In contrast, Hyena is shot almost entirely handheld, the camera either following Michael and the other characters as they storm through the film’s narrow hallways and haggard apartments or else leading them on, studying their faces. It’s bathed in the grimy fluorescence of blue and red lights, the aesthetic of strip clubs and urban decay, and is heavily soundtracked by trancelike synthesizer music. As in Nicolas Winding Refn’s films, these attributes give the action a propulsive and decadent feeling. And the acting is tremendous throughout, filled with the kind of sophisticated character work that often sets British thrillers apart from their American equivalents. Ferdinando in particular takes on the weight of the movie and makes it his own; one scene, in which the camera steadily approaches him as he drinks with Stephen Graham’s David Knight, has the slow impact of a fuse burning down.

Second, and more significant, is the point of attacking this level of depravity in art. In a political climate that serves up constant reminders of how the police can be the opposite of infallible, Hyena makes the claim that it’s even worse. It isn’t anthropology or documentary; instead, it’s a portrayal of how and why men with lawful power can come to misuse it. Explaining Michael to an underling, the internal affairs man played by Richard Dormer says, “You’d think that policemen like Michael Logan wouldn’t exist. They exist because they’re good at their job. They do good work and they become untouchable.” Even though Hyena’s portrayal of these policemen is almost certainly hyperbole — I hope! — the clarity and extent of it makes a point that much of American drama can fail to grasp. There’s nothing charismatic or admirable about the fallen and abusive. On the contrary: If the definition of “antihero” implies the opposite of heroic, then look at a true antihero and see how you feel.