The History of the Eagles and Sound City: Recapturing the (Allegedly) Good Old Days 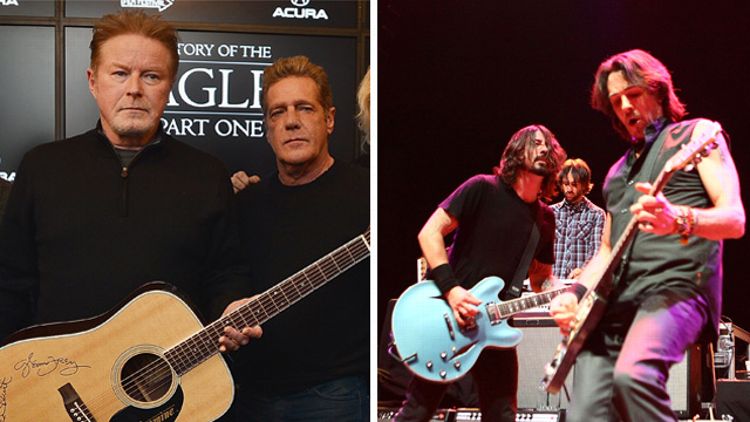 “Ninety percent of the time, being in the Eagles was a fucking blast,” says a square-jawed, movie-star-handsome, 64-year-old Glenn Frey in the opening minutes of The History of the Eagles, a two-part, three-hour documentary airing tonight and Saturday on Showtime. Frey delivers the line with the stoned-faced ebullience of an asshole father sarcastically praising his son’s tackling after Friday night’s big game; he’s so stern that the sentiment verges on unintended irony.

The moment sets the tone for the rest of this engrossing, not-quite-forthright “authorized” biography of one of the most popular rock bands in the history of mankind: The History of the Eagles is illuminating, only if you know how to read between the lines.

Back in the ’70s, when the record industry was enjoying the first blush of its big-money salad days, the Eagles typified expertly crafted, universally pleasant, and defiantly crowd-pleasing rock music. And yet, at the band’s core, there was always a pitch-black joylessness. This dichotomy makes the Eagles fascinating, if not exactly likable. Every classic-rock band has a “dark” segment of their narrative arc that arrives once the euphoric effects of fame and drugs wear off, and the reality that you’re still the same fucked-up bunch of people sets in. There’s plenty of that in History, as you would expect from an Eagles doc — as Don Henley says at one point, the in-fighting and money-grubbing that reigned inside the Eagles’ camp was foregrounded into each of their albums. The Eagles chronicled their loss of innocence, song by incriminating song, and listeners used it to soundtrack their own willful self-corruption.

But the euphoria part — the time before the crash, when doing bumps off the leather-coated interior of a Ferrari zooming at 90 mph down a SoCal freeway is supposed to be awesome — seems to have never happened for the Eagles. Part one of History depicts the band’s rise as a rote, oddly perfunctory exercise; from early in their career, the Eagles expected to be successful, they coldly followed the necessary steps to make it happen, and then once the money rolled in, Henley and Frey began dispassionately dispatching their meddlesome sidemen. Former hotel-destruction performance artist Joe Walsh is the only character in History who seems capable of experiencing genuine human emotion, which makes his eventual post-rehab subjugation under Henley/Frey’s cash-dispensing heels all the more depressing. History can’t explain why anyone would ever want to check in to the Hotel California; it dwells instead on the purgatory of never being able to leave.

History falls into a familiar trap for docs like this: Because it relies solely on interviews with the band members and close associates, it must conform to their version of events. This explains the existence of the mostly superfluous Part 2, which has the thankless task of making Frey’s sax-y, Miami Vice solo period not seem like a sockless curio from a thoroughly ridiculous time in American culture. History is ultimately better at showing than telling: The archival footage from the ’70s captures the Eagles right as Hotel California transformed them from traditionalist L.A. country-rock guitar-pickers to jet-setting stadium rockers. Later on, we see Frey exchange his long hair and Russell Hammond mustache for a Patrick Bateman haircut and loudly colorful Carsenio sport jackets. Even outside of the Eagles, Frey’s life was a metaphor for an entire generation.

In Hotel California: LA From the Byrds to the Eagles, a BBC documentary (which you can watch here) that fills in parts of the Eagles’ story that History chooses to dodge, eccentric songwriter-producer Van Dyke Parks says that his generation of post-hippie Hollywood strivers presided over the “corporatization of rock.” No band is more emblematic of this than the Eagles. While History doesn’t hit upon it directly, you can see this process of corporatization slowly unfold by studying the changes in clothes, hairstyles, and, finally, attitudes as the documentary marches haphazardly toward the band’s hugely profitable run of post-reunion tours in the ’90s, ’00s, and ’10s.

Finally, near the end of Part 2, Frey tells a chilling anecdote about threatening to fire guitarist Don Felder unless he agrees to take less money than him and Henley. Frey is obviously gleeful about calling up Felder’s management and promising to toss out “the only asshole in the band” if he doesn’t cave to his demands “by sunset” — yes, he really says “by sunset” — only he has the same surly facial expression from before, when he talked about how being in the Eagles was a blast. Perhaps schadenfreude is the closest the Eagles ever got to happiness.

The History of the Eagles ends with Henley referring to Neil Young’s famous line about aging rock stars — “It’s better to burn out / than it is to rust” — and making a positive case for rust being a signifier of hard-won skills and invaluable experience. Dave Grohl is a couple of decades younger than Henley, but he posits a similar pro-rust argument in his documentary Sound City, now available on Amazon Instant and other VOD services. Grohl’s filmmaking muse is a defunct, rundown L.A. recording studio that berthed a decent-sized collection of classic records — including Fleetwood Mac’s Fleetwood Mac, Tom Petty’s Damn the Torpedoes, and, most crucially for obvious reasons, Nirvana’s Nevermind — before finally going out of business a few years ago.

Grohl’s ostensible intention is to pay tribute to undervalued rock landmarks, whether it’s Sound City’s mythical all-analog “Neve console” or Rick Springfield’s Working Class Dog, which was recorded at the studio and remains the best Elvis Costello knock-off record this side of Joe Jackson’s Look Sharp. (Springfield’s rocking guest appearance with the Foo Fighters is a Sound City highlight.) But what Grohl is really after in Sound City is critiquing that damned modern music through the prism of an irrecoverable past.

Let me preface what I’m about to say with this: I like Dave Grohl. If he’s not the best rock drummer in the world right now, he’s among the top three or four. (But, seriously, he really is the best.) Grohl’s nearly 20-year tenure in the Foo Fighters has been, if not spectacular, reliably solid, with at least two truly great records (1995’s self-titled debut and 1997’s The Colour and the Shape) to his credit. In interviews, Grohl always strikes a likable, enthusiastic presence, particularly when he’s talking about the glory of rock, past and present.

But when Grohl starts in on the missing “human” element in contemporary music, head for the exits. This theme, which Grohl hits on throughout Sound City with the subtlety of his opening snare smacks on “Smells Like Teen Spirit,” was also the subject of that muddled speech he gave at the 2012 Grammys, when he appeared to take an ill-advised stand against the rising tide of EDM and other music not made by aged white men on guitars. Only Grohl is too smart and self-aware to risk sounding like a full-on fuddy-duddy, so he chooses a target in Sound City that can’t defend itself: Pro Tools.

For Grohl and his like-minded interview subjects — who range from Buddha-like producer Rick Rubin to an alarmingly Botoxed Barry Manilow — the problem with music today is that they just ain’t making it like they used to: inside expensive studios, with high-priced engineers, and on impossibly pricey equipment. Now, anybody can make a record. Anybody! And it’s so cheap and easy! Do these amateurs even know what they’re doing? Whatever happened to, like, learning your instrument, maaaan?

Grohl spends a lot of time — way, way too much time, given how misshapen and segue-heavy this insider-y vanity project is — talking moonily about his early, pre-fame punk-rock days, when he and his pals piled their shoddy equipment in a van and excitedly set off on a vision quest. What he doesn’t seem to understand is that you could drive a van through the holes in Sound City’s reactionary technophobia. Does Grohl not get that today’s rock bands are no longer handed $60,000 recording budgets, like Nirvana had when it made Nevermind? Sure, it was probably a lot cooler to make records in ’75, when you could afford to hang out for weeks (at $600 per hour) with Lindsey and Stevie as you painstakingly crafted your latest masterpiece. But, for most artists, that time has long since passed. If it weren’t for Pro Tools, they wouldn’t be able to make records at all.

Fortunately for Grohl, he’s not one of those artists. When Sound City closed in 2011, Grohl paid tens of thousands of dollars for the studio’s control board, and installed it in his home like a high-tech moose head. The second half of Sound City is composed mostly of Grohl jamming in his studio with rock-legend BFFs like Paul McCartney and John Fogerty, and recording the results on his new sweet-ass board. Good for him. But if Sound City proves anything, it’s that Dave Grohl has as much in common with the average rock dude in 2013 as any pop star making so-called “inhuman” music. For the next great rock band, fetishizing old gear is a luxury they likely won’t be able to afford.

Five Questions on American Idol: Why Is it Impossible to Sing That Gotye Song?