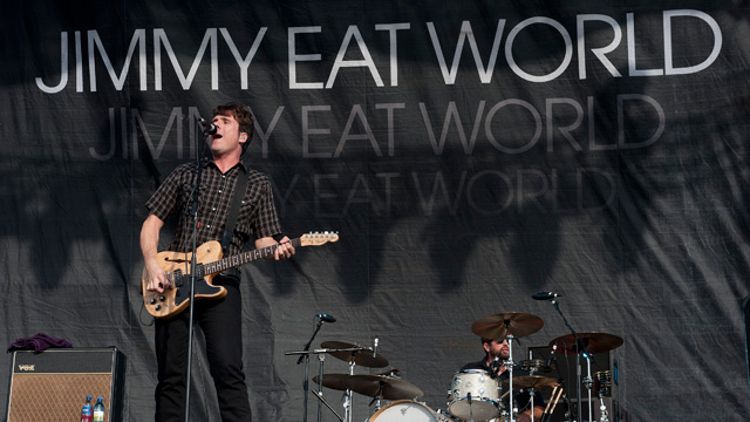 If the term “dad rock” is meant as an insult, it’s wasted on bands like the National and Wilco. Are they a little vanilla? Perhaps. Do they represent an exponential upgrade over what dads are probably listening to in reality? Absolutely. Besides that, they’re not only some of the most successful bands in existence, they’re intelligent, community-minded, and politically aware entities who’ve matured on every record, aged gracefully, and are extremely popular among the 25-to-34 female demo. That doesn’t sound like “dad” to me.

Let’s think about what “dad” really signifies to most of us: You can’t believe he wore that shirt in public and for crying out loud, who cosigned that haircut? They give you advice that’s kinda awkwardly worded and totally helpful in retrospect. They’re not cool, but they’re not anti-cool, either; they occupy this netherworld where it has no real bearing on your day-to-day existence. But above all, they were always there for you, and far too often, you never said “thank you” for that. For all of its association with the most hormonal and embarrassing moments of your youth, Jimmy Eat World is dad rock.

Let me drive this comparison home by saying that as much as my serious Jimmy Eat World fandom subjects me to public ridicule, I love them to death and will swing on anyone who tries to insult them — Clarity and Bleed American are unequivocally two of my favorite albums of any genre in any year and can be wholly dismissed only by people who are emotional corpses. But the reason that reasonably sane dudes in their mid-30s have to speak about them in hushed tones is that the harder they try to be cool, the less cool they are. And lord, do they try sometimes.

Their new album, Damage, released this past Tuesday, is an example of them trying to be cool. They’ve described it as an “adult breakup album,” which is a savvy way to counter the perception that they’re still a band for teens that aren’t even going on dates to begin with. As with recent Black Sabbath, Alice in Chains, and Soundgarden albums, it’s actually pretty good, except when it’s terrible, which isn’t too often. I say this out of kindness; it really sounds like a latter-day Gin Blossoms album, their precursors in Arizona-based uncool rock. That means it’s about equal to Chase This Light and better than Invented, but if I’m going through a breakup in the near future, there’s no way I’d rather listen to Damage than Clarity.

Fortunately, they’ve done something completely unprecedented for the album’s promotional cycle — they’ve made a truly watchable video. “I Will Steal You Back” is a basic treatment by anyone else’s standards — it’s a mostly B&W performance clip that shows some evocative but not provocative backstage moments; Jimmy Eat World’s members are not required to gesticulate, act, pose, or do anything that might make you think they’re cooler than they actually are. And that’s a huge relief if you’ve encountered basically any of their videos, which have tried to make Jimmy Eat World look cool in the following ways:

The list goes on, but we’re not here to bury Jimmy Eat World, but to sing a praise chorus for a band whose musical greatness is equally and oppositely countered by their visual aesthetic. So here are five of their least-worst videos, the ones that offer the most we can hope for from dad, which, in the words of Bart Simpson, isn’t to feel pride, but to feel “less shame.”

“My Best Theory,” From Invented

Bonus points for attempting to make a high-concept piece that doesn’t actually have the band in it, but this still kinda looks like a live-action Tool video.

“Big Casino,” From Chase This Light

Much like “My Best Theory,” this video is more notable for what it doesn’t do — that is, explicitly follow the “New Jersey success story” narrative of the lyrics. They only go for a slightly less obvious angle, playing in front of a casino even though the word “casino” is not used once in this song. Fortunately, they didn’t get all “Space Lord” with the concept.

This one’s actually grown on me, but let’s make one thing clear: This is “dark” and “troubled” Jimmy Eat World and the video still involves a meat suit that’s not being played for laughs.

“The Middle,” from Bleed American

Leave it to Jimmy Eat World to co-opt the message of “We Don’t Have to Take Our Clothes Off” as a means of consoling high school kids stuck in a social schematic where everyone’s making out, getting drunk, and partying, and have the message make absolutely no sense to those kids. This was Jimmy Eat World’s biggest hit, and if a little teensploitation had to go down to ensure they can still headline decent venues in 2013 without doing a triple bill with All-American Rejects and New Found Glory, I suppose the ends justify the means. And yet … did anyone ever figure out why Jimmy Eat World didn’t have to perform in their underwear?

A truly great, no-qualifiers-necessary clip that nonetheless confirms everything charmingly dopey about Jimmy Eat World — they got their best video idea from Coldplay. Parachutes-era Coldplay, when they were being called bedwetters by one of the Gallagher brothers (whichever one has all the great quotes), not even the Coldplay that was hanging with Kanye and impregnating actresses. They even hired the same director. And so we have the most dad-rock moment of all, the moment where you’re in the car together and he blurts out, “I’m really into this new band, the Coldplays.” God bless these guys.