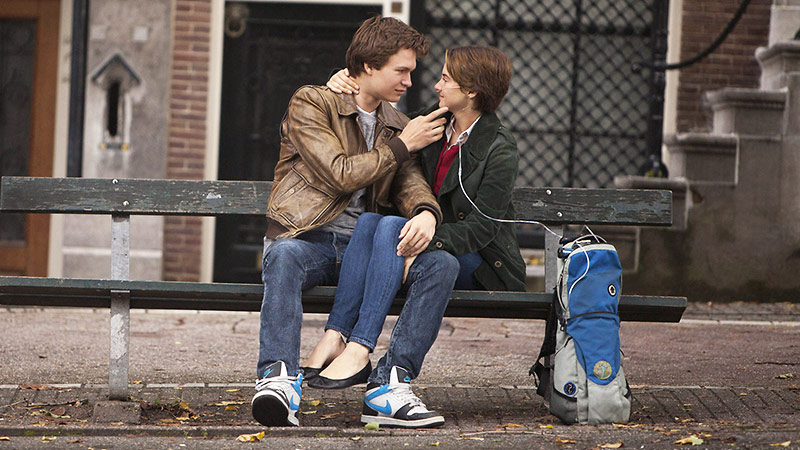 If your local multiplex looks like a 1D concert this weekend, don’t sweat it. All the cool kids will be piling into minivans to see The Fault in Our Stars, and you’d be wise to join them. The movie, an adaptation of John Green’s 2012 book of the same name, is a fairly standard teenage love story, except for one thing. SPOILER ALERT: EVERYONE HAS CANCER. Obviously, this complicates matters for our protagonists, doomed as they are to suffer through brief, painful existences, but it only amplifies the affection between them. And by the time the credits roll, you’ll have fallen in love, too.

Courtesy of Grantland’s resident TFiOS heads, Mallory Rubin and Matt Borcas, here are 10 things you need to know as you embark on this emotional journey:

1. You’ll want to bring tissues. Many, many tissues.

Mallory Rubin: There’s only one way you won’t cry during The Fault in Our Stars, and that’s if you’re already psyching yourself out about how much you’re going to cry during The Fault in Our Stars. Absent that tear-duct stage fright (or a love-consuming black hole where your heart should be), prepare for some serious waterworks. I’d highly recommend eating your popcorn quickly so you can openly weep into the empty bucket and/or bringing a backpack full of those handy travel tissue packs so you can freely wipe your eyes, nose, and other leaking facial orifices. You’ll shed tears of unrivaled joy; you’ll shed tears of unspeakable sadness; and you’ll shed tears that you can only shed when something has allowed you to see through the abyss and into the meaning of life, so get ready. I could barely read the last third of the book through my constant curtain of sadness, and I’m bracing to once again ride that emotional roller coaster.

Speaking of the book …

Matt Borcas: Who knew it was legal for a stand-alone, non-fantasy YA book to be adapted for the silver screen? Between Harry Potter, The Hunger Games, and Divergent, seeing the latest teen blockbuster has entailed a substantial reading commitment, lest you get mocked for not having a Mike Pereira–like grasp on the rules of quidditch. If you passed on those movies because thousand-page fairy tales aren’t your thing, The Fault in Our Stars’ dual lack of magic and sequels should come as a breath of fresh air. While I’m obligated to recommend reading the book first, no one’s saying you have to. This story is propelled more by feelings than plot mechanics, so you’ll enjoy the movie all the same.

3. And you’ll enjoy it whether or not you’re a young adult.

Rubin: Real-talk time: Young adult fiction is awesome, and you’re only hurting yourself if you refuse to read it or see it. The YA shelves and screens are stuffed with excellence, and we need to dispense with the “that’s for kids” bullshit and start being OK with the fact that there’s no numerical floor or ceiling on enjoying a great story. And in case you’re wondering where TFiOS ranks among some of those great stories, the answer is pretty darn high: Entertainment Weekly recently attempted to crown the best YA novel of all time, and John Green’s masterpiece advanced to the final … where The Boy Who Lived unsurprisingly and unceremoniously unseated it.

Bottom line: I’m 27, and I love this story; I would have loved it if I’d read the book when I was 17, and I know I’ll still love it if I read it or watch it again when I’m 67. Plus, if Hazel and Gus teach us anything, it’s that life is precious and we don’t know how much time we have, so we might as well do what makes us happy while we can. Well, this story makes me happy (despite the tears!). It doesn’t make me feel 13; it makes me feel alive.

4.  These actors are qualified to play the most important teen trio since Harry/Ron/Hermione. 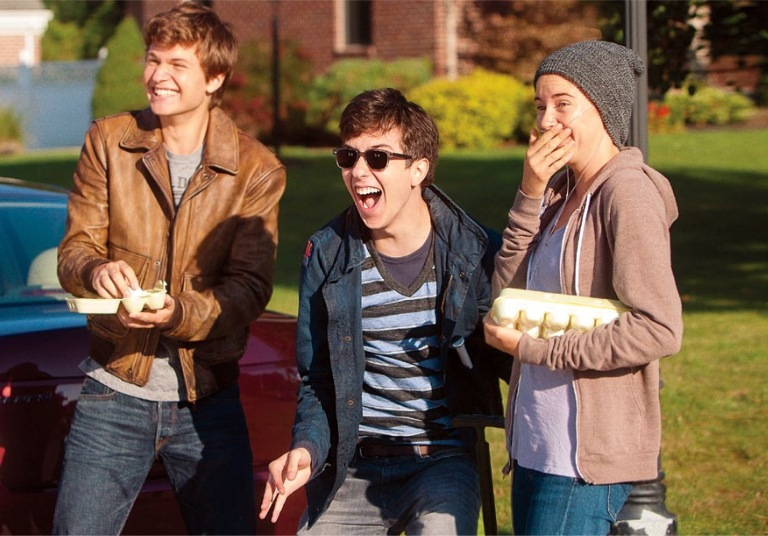 Borcas: According to legend, Shailene Woodley wrote Green a 40-page missive begging to play Hazel, so you can’t knock her dedication. She boasts solid credentials, too: After a breakout performance in 2011’s The Descendants, Woodley landed roles in 2013’s excellent The Spectacular Now (which, as it turns out, was a great training ground for TFiOS) and March’s Divergent, her mainstream coming-out party. (Don’t blame her for the shitty source material!) As such, I’m inclined to overlook this cringeworthy Vulture profile, wherein we learn that she “doesn’t have a permanent home or cell phone,” is “part of a New Age continuum,” “has seriously considered becoming a herbalist,” and “brushes her teeth with clay.” CLAY. Those incisors better be sparkling.

Nascent heartthrob Ansel Elgort has been cast as Gus, allowing him to relish the full Woodley experience. In Divergent, he played her brother; here, the two will enjoy some old-fashioned hotel coitus. With only five acting credits to his name, Elgort’s casting was a bit of a risk, but after watching him on Fallon, I’m sold. Did I mention he’s a DJ?!?

Finally, as the blind and brooding Isaac, Nat Wolff is the trinity’s unquestioned third wheel, but he’s also the centerpiece of TFIOS’ funniest scene. What’s more, he starred in Nickelodeon’s criminally underrated Naked Brothers Band, which wasn’t nearly as inappropriate as the title would indicate. The show aired in 2007 and was mainly popular with 8-year-olds, so he’ll be a familiar face for TFIOS’ target demo.

5. If you are a mother or have a mother, you’re going to want to hug the mothers in this story.

Rubin: In many ways, this is Hazel and Gus’s story. In many other ways, it’s a universal story, and as such, the secondary characters are hugely important. Borcas already talked about Isaac, which leaves two secondary characters who need to be on your radar before you head over to your theater on opening weekend.

First, there’s Peter Van Houten, who earned Hazel’s (and, in turn, Gus’s) admiration and gratitude with his cancer-centric tome, An Imperial Affliction. Van Houten, played by Willem Dafoe for reasons I’ve yet to grasp, won’t have a ton of screen time, but his influence will hang over the entire story. It’s not hard to argue that he’s actually the third-most important character, if only because of the lesson he (inadvertently) teaches our heroes: Life is full of surprises, and not always good ones.

And then there’s Hazel’s mom, played by Laura Dern with presumably just the right mix of tenderness, sadness, and hope. When I read the book, Hazel’s interactions with Mr. and Mrs. Lancaster gave me more vise-around-my-heart feelings than any other plotline. There are few sadder things than the thought of a parent losing a child … until you consider what it’s like when the child knows he or she is going to cause that crushing grief one day. If you are a mother or have a mother, you’ll cherish this part of the story. And you’ll probably call your mom right after you leave the theater to say “thank you” and “I love you.”

6. This is a great date movie.

Borcas: Hazel suffers from thyroid cancer and requires an oxygen tank to breathe. Gus lost his leg to osteosarcoma. Needless to say, they have very awkward sex.

But for at least one young reader, they also have very instructive sex. This past weekend, at John Green’s BookCon Q&A, 16-year-old Robert Berger displayed his prosthetic leg and thanked the TFiOS author for “answering a lifelong question of mine, which is: during sex, to keep my leg on or off?” I won’t spoil the answer for you, but I will say: This is a perfect date movie … if you can keep from sobbing the whole time.

7. You’ll be quoting this nonstop, forever. Just accept it and start perfecting the way you say “OK.”

Rubin: “I believe we have a choice in this world about how to tell sad stories.” “Uh, you don’t ‘take pot.’” “It’s a metaphor, see?”“You don’t get to choose if you get hurt in this world, but you do have a say in who hurts you.” “I am in love with you, Hazel Grace. And I know that love is just a shout into the void and that oblivion is inevitable … and I am in love with you.” “All your efforts to keep me from you are gonna fail.” “I fell in love with him the way you fall asleep: slowly, and then all at once.” “It’s a good life, Hazel Grace.” “OK? OK.”

AND THAT’S JUST FROM THE TRAILER. My goodness.

A quick aside: Props to my maid of honor, Allison Kostka, for including “I fell in love with him the way you fall asleep: slowly, and then all at once” on the “Literary Love Quiz” she dispensed at my surprise bridal shower. What a woman.

8. How did this story get so big in the first place?

Borcas: The Fault in Our Stars is essentially popular because of a wizard-rock song. John Green and his brother Hank started vlogging in 2007, and when Hank dropped “Accio Deathly Hallows” in advance of the seventh Harry Potter book, the duo’s audience increased dramatically. Since then, the Vlog Brothers have become a YouTube sensation, releasing two videos per week to a rabid fan base known as nerdfighters, who, it should be noted, don’t fight nerds, but fight for nerd-related causes, such as book reading. Shout-out to my sister for turning me on to these videos, which are by turns hilarious, touching, and highly educational. Best of all, anyone can be a nerdfighter.

When Green told his legion of followers about TFiOS in June 2011, preorders catapulted the book to no. 1 on Amazon and Barnes & Noble months before it was even finished. While Green had published three YA novels previously, his homegrown digital militia made all the difference with TFoOS. Among the book’s diehards, he’s a rock star, drawing “more fervent screams of ‘I love you!’” than Woodley and Elgort at public screenings of the film. Here, take a look:

Rubin: The inevitable truth about a story like this is that you think you know how it’s going to end. And there might come a point during TFiOS when you do figure it out; if you’re paying attention, you should. But you don’t know now. This is a relatively safe, relatively spoiler-free zone, so I won’t say anything more specific than that. I’ll just urge you to anticipate curveballs, and to accept and appreciate that uncertainty is part of this story’s beauty. We can’t figure out our lives from a two-minute trailer; why should we be able to figure out this movie?

Borcas: Like a quarterback studying game film of a future opponent, you’ll need to prepare for TFiOS with the trailer. Everything feels possible when Hazel’s gazing at the night sky, and then bam, she’s got a cannula up her nose, headed off to support group, counting down her numbered days. Meanwhile, here’s Gus, who likes to chew on cigarettes and wear ill-fitting Pacers jerseys. They make a great match.

“Gus, I’m a grenade,” warns Hazel at 1:54. “One day I’m gonna blow up, and I’m gonna obliterate everything in my wake.” In other words, she’s Godzilla, emotionally speaking. But the lesson of TFiOS is that even Godzilla is capable of finding love.

Grantland Recommends: ‘The Mind of a Chef,’ ‘Fridays at Enrico’s,’ High-Tech LARPing, and More

'Game of Thrones' Precap: Onward to the Wall!