Samurai Robots, Nude Robin, and Monster Love: The Batman-Godzilla Movie That Could Have Been 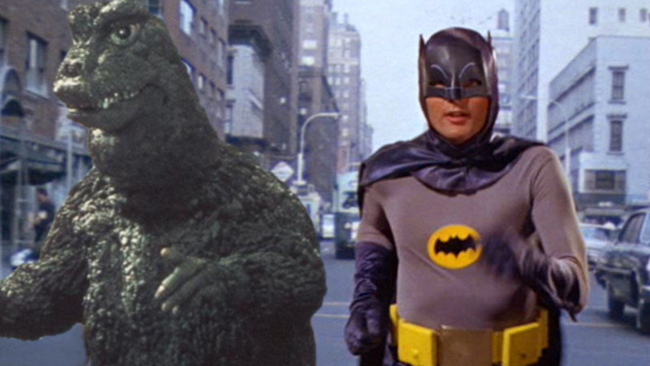 Picture this: Batman (Adam West), Robin (Burt Ward), and Batgirl (Yvonne Craig) barrel toward Osaka on a Japanese bullet train when five sumo wrestlers stop by to stir up trouble. BAM! PAM! KAPOW! — the Dynamic Trio lay waste to the blubbery baddies. But then, without warning, Godzilla rises out of Ise Bay, stomps on the train, and sends Batman and Robin flying into the water. The King of Monsters spots Batgirl and picks her up for closer inspection. From afar, a mind-controlling mad scientist whispers into Godzilla’s ear “Kill! Kill!” But something deep in the beast’s heart tells him to protect the leather-clad lady. Godzilla, aping King Kong’s unrequited romance for Ann Darrow, places Batgirl back on the ground and proceeds to decimate Osaka.

“Love happens to Godzilla,” reads the prose treatment for Batman Meets Godzilla [1. Transcript, Batman Meets Godzilla, Date Unknown, Box 45, Coll. 06851, William Dozier Papers, American Heritage Center, University of Wyoming], a sequel to 1966’s Batman: The Movie that came close enough to reality that someone was paid to put harebrained ideas to paper. Much like today, a crossover event meant double the dollar signs. Why not take two of the most iconic characters in pop culture and smash them together?

In the early 1960s, Batman comic books sold nearly 500,000 copies per issue. The number jumped to more than 800,000 in 1966 — the same year producer William Dozier debuted the live-action Batman series. Dozier, who came from serious dramas, had never read a Batman comic when ABC asked him to adapt the character for television, but he was a fan of absurdist pop art. In a 1966 interview with the CBC’s Telescope, he explained his method of turning a “juvenile” comic book into a watchable prime time program: “The fairly obvious idea was to make it so square, so serious, so cliché-ridden, so overdone, and yet do it with an elegance and style, that it would be funny. So corny and so bad that it would be funny. That appealed to me.”

Combined with Dozier’s psychedelic hit, Caped Crusader frenzy overflowed from the States and into the global culture. Japanese audiences went nuts for the character, and soon Tokyo publishers were purchasing the rights so their own manga artists could draw and sell homegrown comics (a lost art recently compiled in Chip Kidd’s Bat-Manga!: The Secret History of Batman in Japan). Bat-mania coincided with family-friendlization of Godzilla, a decade-long transition from nuclear metaphor to child wall ornament. For Godzilla parent company Toho Limited, the unprecedented returns of King Kong vs. Godzilla (over ¥350,000,000 by the end of its 1962 run) were more than encouraging. Watching annual Godzilla installments find modest success in America, Dozier came to the same conclusion.

Little is known of Toho’s Batman vs. Godzilla treatment, commissioned from Mothra vs. Godzilla writer Shinichi Sekizawa around the time of the Batman series’ launch. It’s believed that Toho and Dozier’s Greenway Productions never collaborated on developing a script together, despite elements reported to be from Sekizawa’s take winding up in both Batman Meets Godzilla and 1967’s Son of Godzilla (of all things, the idea of a device that controls weather). Whatever knowledge Dozier had of Sekizawa’s work is unreported in the official 22-page treatment for Batman Meets Godzilla, filed in the producer’s archives without an author or date (but plenty of handwritten grammatical corrections). Even with the Godzilla franchise’s legacy of lunacy, it’s hard to imagine anyone outside of America cracking a story like the one that transpires in Dozier’s proposal.

The movie opens with Police Commissioner Gordon (Neil Hamilton on the original series) and his daughter Barbara (Craig) taking “a well-deserved rest aboard a Far East cruise ship.” Gordon’s in it for business, scouting “police facilities in the Orient,” while Barbara reunites with her Vassar college chum Reiko Hammamoto. Everything’s hunky-dory until an unpredicted tidal wave capsizes the boat. The cause? According to Outerpol’s Far Eastern Chief, Ito Nagano, it’s the evil work of Klaus Finster, a German meteorologist who recently emigrated to Japan after 20 years in Argentina. Holed up in a secret lair under Mt. Fuji, Finster claims to have control of the weather, and he’ll destroy the country unless he’s given $20 million in gold (a detail originally written as “five million” until an editor decided to beef up the stakes). Gordon tells Outerpol there are only two men fit for this job: Batman and Robin.

Turns out that when Finster says he “controls the weather,” he really means he operates Godzilla like he’s the Statue of Liberty in Ghostbusters 2. Upon learning that Batman and Robin are on the case, the evildoer flips a switch that sends Godzilla zipping out of the Mariana Trench. Being a master of robotics, Finster makes sure to greet the duo with an android replacement of their friend Count Draidl, who now has a gun for an eye. After defeating the imposter, Batman and Robin meet up with Gordon and the Japanese police. Batman suspects Godzilla’s involvement, so they watch clips of his battle with King Kong just to make sure. Yes, this mass destruction does seem to fit the Godzilla profile.

Batman’s approach to defeating Godzilla and Finster is a waiting game, giving Bruce Wayne and Dick Grayson plenty of time to weasel their way into small-scale trouble. A Kabuki show becomes a sword-flailing set piece when the actors bum-rush Wayne with samurai swords. Reiko is decapitated in the fight (but don’t worry — she turns out to be a Finster-built spy robot, too). As Batman and Robin, the two set up a meeting with Finster, only to find themselves in a car chase — complete with spike-shooting motorcycles — and a taxi cab torture chamber filling with poisonous gas. Luckily, Barbara Gordon swoops into action as Batgirl, melting the door with her pocket-sized blowtorch. This is all setup to a foot chase through a Japanese bath house, Batman and Robin dropping everything but their cowls (have to follow customs) for a nude, Benny Hill–style romp.

Batman does get around to fighting Godzilla. They encounter the monster for the first time in Takada, a turbulent, Batcopter reconnaissance mission that sends Batman into a tizzy. His report earns the trust of the Japanese government, which declares “millions for defense, not one cent for tribute!” (the script notes that this line was first uttered by Charles Cotesworth Pinckney, Minister of the French Republic, in 1797). When word comes through the wire that Finster’s next target is Osaka, Batman & Co. head to the bullet train for even more blissful destruction.

Godzilla’s affection for Batgirl is Batman’s eureka moment. Godzilla feels emotion. And why would anyone with emotion go into hiding and return every five years? To mate, of course. Even in treatment form, Batman Meets Godzilla captures West’s penchant for overdramatized postulating. Revisions reveal two distinct plans that Batman would have taken to defeat the King of Monsters.

Underneath vicious pencil strikethroughs is the idea of building a transistorized female Godzilla, who could break Finster’s electronic mind control and woo Godzilla back to the water. The idea didn’t fly with Dozier. Instead, Batman went with an idea that sounds a lot cheaper on paper: build a machine that simulates the mating call of a female Godzilla, knock him out with a well placed explosive to the head, and … well, Batman takes a moment to survey the people of Tokyo on what to do with Godzilla. Throw him in a volcano or shoot the atomic-breathing behemoth into space? There’s a unanimous vote for the giant rocket.

In the grand finale, Batman, Robin, and Batgirl hop into their individual vehicles and head to Tokyo to cut Godzilla off at the pass. (The Batmobile was destroyed in a previous attack, so local scientists built him a replacement, which the treatment states “is every bit as good as the original and a fine commentary on Japanese workmanship.”) They dispose of Finster quickly, pursuing him through the empty streets of Tokyo — not unlike the Joker scenes in The Dark Knight — and brawling atop the Kazan building, where the German-Argentine mad scientist slips and falls to his death. Godzilla grabs Batgirl during the encounter, but Batman doesn’t flinch. He activates the mating call — prompting Godzilla to throw Barbara all the way to the Daibutsu Buddha — scales the beast’s backside and ties a bomb to Godzilla’s neck with Batrope. How exactly the scientific community of Japan builds the world’s biggest rocket around Godzilla before he wakes up is glossed over in favor of sheer awesomeness. They blast Godzilla off “into outer space, to hold an orbit of 278 miles above Earth forever!” Because Batman Meets Godzilla is all about factual accuracy.

Why didn’t Batman Meets Godzilla happen? Blame it on a comic-book sea change. Not only would William Dozier pass on making a sequel to Batman: The Movie, his über-popular show would lose enough viewers in two years to warrant cancellation. Just as Batman comics went through a reinvention toward the darker, thematically challenging character we know today, the movies needed the downtime to metamorphose; Batman wouldn’t reappear onscreen again until Tim Burton’s Batman. By 1975, audiences demanded the same change in Godzilla. Toho banked the cartoony character for a decade before introducing a more mature incarnation for the character’s 30th anniversary.

Bad news for those hoping marketing wizards could reconjure the magic of Dozier’s Batman Meets Godzilla; with Toho’s American partner Legendary Pictures at Universal Studios and Batman secure at Warner Bros. Pictures, there’s little chance of the Caped Crusader faking Godzilla sex noises anytime in the future. But that’s the magic of fan fiction, corporate or otherwise: It lasts forever.

‘Game of Thrones’ Precap: The Trial of the Century