‘The Bachelor’: Lessons on Racing Tractors, Killing Zombies, and Maintaining Your Virtue 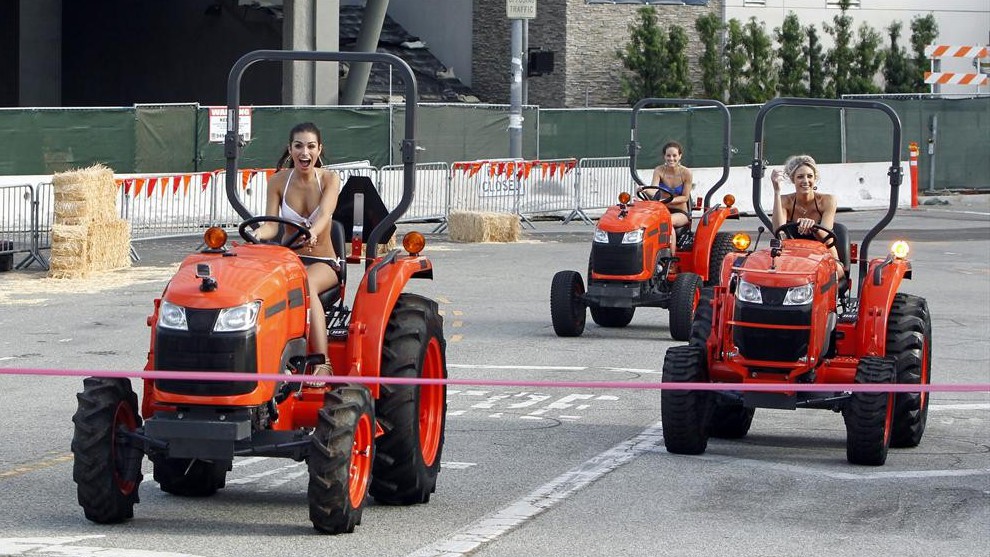 Our new Bachelor, Chris Soules, is the Luckiest Man in the World. We know this because he tells us roughly every three minutes, or whenever our beloved Prince Farming manages to wave off the twinkling cloud of fairy dust that rings his head long enough to reflect on the magic of his circumstances: one regular ol’ corn-shucking dude, plucked twice now from the obscurity of the fields and whisked off to a faraway castle filled with 30 women whose greatest desire is to kill one another to win his ostensibly permanent affections. This is the stuff of dreams. Sweaty, perfect dreams that our hero hopes to wake up from only when he is ready to select the person who may one day become his wife, if everything breaks right, these things are complicated, what if she doesn’t take to the thresher like Amanda? He doesn’t want another Amanda situation, though the insurance company did right by her in the end.

So how can you, just one lonely searcher among the survivors of the Premiere Week culling, become his matching Luckiest Woman in the World, fulfilling every girl’s lifelong dream to defeat two-dozen-plus overserved enemies in mani-to-mani combat? We will tell you how. We will fill your head with knowledge, your spine with iron, your empty heart with hope. Read on and learn as we perfectly distill the lessons of last night’s episode.

This is a lesson review from last week’s session, which ended with a pulse-quickening cliffhanger: What happens when a contestant, confronted with the oblivion of an open limousine door, decides she will not only refuse to go quietly, she will not go at all? What happens when one fully seizes control of one’s fate, snatching it back from the greedy hands of TV producers concerned only with moving the show along?

What happens is that you at least get a chance at a second chance. You get the opportunity to stammer through an explanation of how you didn’t even get to talk on the first, impossibly busy night, filled with speed-dating-quality, booze-lubricated interactions. You get to throw yourself at your Bachelor’s feet, already-compromised dignity be damned, because something about this feels right. Not the baseline humiliation of your circumstance, but this, this incredible connection that formed in the five to 10 seconds you interacted in that driveway a few hours ago. How can you possibly just walk away from that? You may not interact with another stranger in a driveway until the next time you valet the car at a fancy hotel restaurant. If you’re going to play games with your life, you’re going to play them to win.

And so you don’t give up. You get a chance to succeed. Because:

2. This is his life, and there are no rules.

Wait, what? This changes everything. (Unless it doesn’t.) If your Bachelor pleads for your soul to trickster emcee Chris Harrison — Shadow Bachelor, Dark Cupid, Rosemaster Supreme, Lord of Lies, Whispering Shoulder-Goblin, call him whatever suits you, he’s chill about it — anything, apparently, can happen. The rules? What are the rules? The rules are what Chris Harrison says they are. This is the Bachelor’s life we’re talking about, so let’s just shit away 50-odd seasons of historical precedent and play this by ear because our cripplingly indecisive Li’l Abner couldn’t reduce the population of his personal Dogpatch to the previously accepted levels. If he wants you to stick around to the next elimination ceremony, you stick around. Chaos reigns.

We’ve told you — again and again, and also again — never to trust Chris Harrison. Are the crow’s wings tucked carefully beneath the back of his obsidian toga not enough of a tipoff? The laurel of withered roses circling his head? No? You’ll learn eventually. Maybe this week. Maybe next. Maybe when you look down at your chest and see one of his thorny arrows jutting not from the target over your heart, but from your gut. Never let your guard down. His aim is true.

3. It’s right there on the date card: Show him your country.

A bikini march through downtown Los Angeles to an urban tractor race? Sure, why not? Your Bachelor needs to feel comfortable in his new surroundings; no one wants him suffering a panic attack, entering a dangerous fugue state, and rampaging through the nearest farmer’s market, overturning tables until he can find an honest ear of corn. The big city can be an overwhelming place to a man of humble origins. If straddling a John Deere in nothing but a string two-piece and a pair of cowboy boots and chugging down a city block at a brisk 3 miles per hour is going to ease his anxiety, do it. The Luckiest Man in the World may have whispered something about this particular fantasy to Chris Harrison to see just how far he could push his luck, so keep making all of his boner-beckoning dreams come true, you don’t want him returning to Iowa disappointed. This is, after all, his fantasy, not yours. Yours will come later, in a Neil Lane box, atop a mountain in a faraway land, scored by a string section and witnessed by millions. Tractors will probably not be involved at that stage, unless he asks for them again, this is his life, and his needs must be met first, that is the way of the Bachelor world. Maybe there will be more tractors. At least by then it won’t be your first time on a tractor.

In the meantime, ride to win.

4. Break into his house.

Your Bachelor’s quarters, unguarded but for the impassive eye of the camera, may be tantalizingly close to the mansion, so it would be strategically suspect not to take advantage of that fact by staging a little breaking-and-entering reconnaissance mission. You may find nothing more useful there than a bunch of motorcycle helmets — he likes motorcycles, file that away, and also put on the helmets and hit your head into every available surface, brick walls, fridge, just go for it, you’re an unstoppable human battering ram — but you never know what crucial piece of intel you may recover. Memorizing the layout and vulnerable points of entry may also come in handy in subsequent weeks, when you steal away to wake him in the middle of the night for some unscheduled one-on-one hot-tub time. Knowledge is power, no matter how it’s obtained. Let those other girls try to go in blind and stumble over that teetering pile of crop reports, you’ve already mapped that out because you were smart enough to plan ahead. 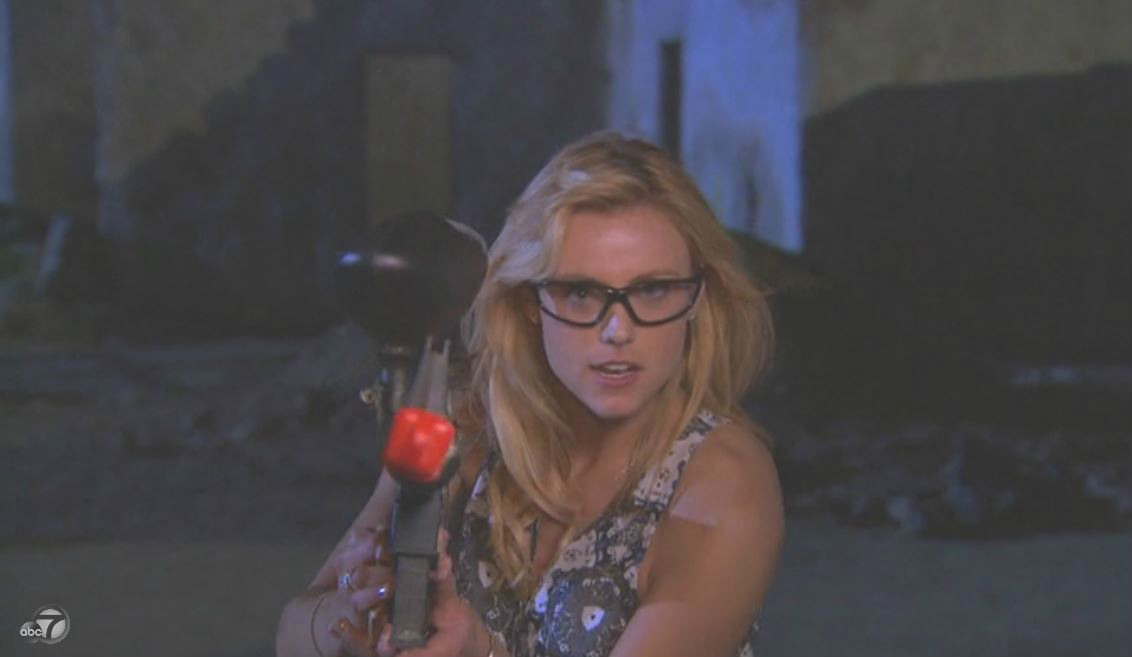 You probably weren’t expecting to find yourself in the middle of a zombie attack. Are you even in the right show anymore? What is this zombie garbage? And paintball guns? These zombies aren’t even real? Are you supposed to act like you’re afraid of a bunch of production assistants who volunteered to put on some Halloween makeup and get shot by a half-dozen alcohol-impaired dating-show contestants handed low-caliber weaponry? Wait, are you supposed to shoot the zombies or the other girls? Wouldn’t it make more sense to shoot the other girls, since they are clearly the enemy, and it would be so, so easy just to aim that barrel at their unprotected backs while they’re busy chasing around the undead PAs? This is stupid. Or is it?

Show no fear. Shoot the other girls. Even if just in the ankle. A hobbled competitor is a less dangerous competitor.

Zombies are not real, but an enemy limping around in a cocktail dress, preoccupied with who turned on her, is very real.

Winning a competition like The Bachelor is all about leveraging your unique advantages. And if you are a virgin, there is a very high probability that you are the only one in your contestant pool — those who protect their virtue deep into their twenties are, generally speaking, not looking to surrender it on national television, even in the relative, super-classy privacy of a well-appointed Fantasy Suite, with all the appropriate sensual oils and wicker baskets brimming with gratis prophylactics.

But as one suddenly disadvantaged competitor — whose quickly abandoned “special things” were a much-less-useful belief in aliens and an offspring named after premium greens1 — pointed out last night: “Guys like taking your virginity. No, seriously. I’m jealous … I’m so jealous, I can’t even use that because I have a kid.”

Will your Bachelor be the kind who enjoys “taking” your virginity? It’s impossible to know. We don’t have the time nor resources to properly research the prevailing attitudes about “waiting until the Final Rose” among the Midwestern farming community. What is immediately knowable is this: That contestant with the kid is not a virgin, and she is already reeling from even the perception of a virgin’s tactical advantage. That’s important.

Hold on tight to that virtue. It could be your greatest ally in this fight for your Bachelor’s heart.

(Or he may not be into it and send you home. You may have to take the wisdom of someone waiting for her E.T. visitation with a grain of salt.)

Was your “refusing to leave and begging for a second chance” gambit successful? And yet, at the end of the night, you once again find yourself without a rose?

OK, cool. There’s no additional shame in quitting now. Don’t be crazy, Chris Harrison’s not going to do that “there are no rules” bullshit twice in one night.

Go home. The virgin’s going to win, anyway. How are you supposed to compete with that?