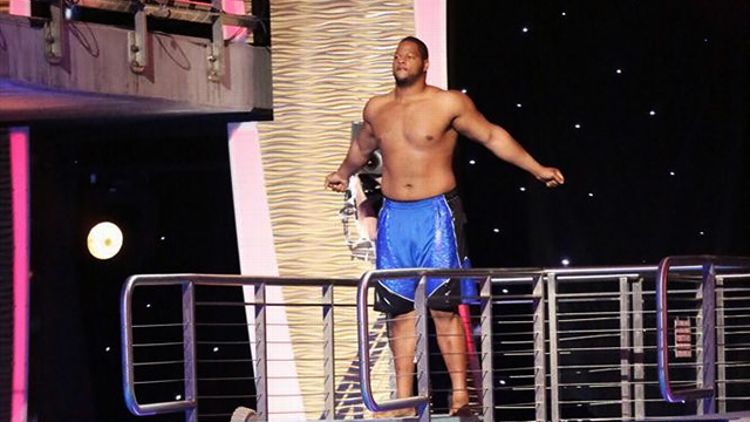 Welcome back to Splash, ABC’s high-diving competition starring a collection of athletes, thespians, and Miss Alabama USA 2012 Katherine Webb. In a surprising turn of events, both this show and these recaps have made it to a second week, throwing both Vegas and the other networks for a loop.

In Episode 1, titled “Week 1,” five of our 10 contestants squared off and hilariously dove off boards of varying heights. The first to be eliminated, in line with many a horror movie script, was The Cosby Show’s Keshia Knight Pulliam. Before going into this week’s episode, titled “Week 2,” a few things of note. For one, the titles of these episodes.

No one on Team Splash has five minutes to think of more creative episode titles than “Week #”? No one? Here are a few, just off the top, that are begging to be used as titles:

That’s all I’ve got. But at least you’re set for next week, Splash. I beg of you, however, to think of something creative for Episode 4.

Also, my initial predictions. Some are still going strong, it’s too early to tell on others, and the remainders proved false from the jump. … also known as “Do we ignore Joey Lawrence’s hair situation for a second straight week?” I chose not to say anything after the first episode, out of respect for Brotherly Love, but not talking about is more of a distraction than discussing it.

So here’s the deal.

Joey is probably balding, which is why there’s a burgundy mink shawl atop his head. That’s all. There’s nothing more to say about it, that’s just what’s happening.

It begins, again, with Splash‘s version of Danny Boyle’s Olympic Opening Ceremony on a peyote trip, with high-flying acrobatics by silver people.

After this ends, and Joey refers to the contestants as our “favorite celebrities,” his cohost, Charissa Thompson, drops a bomb on the viewing public.

“We do have a little bit of bad news to share.”

PLEASE SAY DRAKE BELL GOT CAUGHT WITH THE CLEAR.

“One of our stars that was supposed to be diving tonight had a freak accident.”

I KNEW IT, DRAKE BELL, I REMEMBER HOW MUCH SMALLER YOUR HEAD WAS ON NICKELODEON. WE ALL REMEMBER.

“And is unable to continue in this competition.” Chelsea Lately’s Chuy Bravo fell off a coffee table–like apparatus about nine inches off the ground and broke his heel. Just devastating. Thankfully, he says he’ll be back for Season 2. (The Master P season.)

After a quick chat with Chuy, Charissa drops bomb no. 2 on the universe:

This show is incredible. What a phenomenal alternate to unveil. As a woman whom I have long filed in the same category as Real World: Chicago‘s Tonya from Walla Walla, Washington, I can’t wait for her to not get along with a single person on this show. Brilliant move, ABC.

As noted last episode, when each person enters the stadium in a robe, they get their own personalized song. Last episode, Kareem’s “Skyhook” song was the clear winner, but the lyrics to Brandi’s pop punk anthem have blown that track out of the water (FIRST PUN).

“Brandi Chastain / do it again.
She used to play soccer / now she’s hittin’ the water.”

Legendary. Miss Alabama USA 2012, how do you feel about Brandi? The look of a cold-blooded reality show killer. “DO YOU KNOW WHAT I DID TO KESHIA, BRANDI?” = that look.

Ten seconds later: “Get it, girl.” Don’t be fooled, though. Webb’s out for blood.

Before even meeting her competitors, who will most certainly smile to her face and talk rudely about her behind her back, Brandi has to immediately perform her first dive. What results is the most “I’m not here to make friends, I’m here to win, I hate all of you, keep my name out your mouth, Webb” first dive ever:

Before our second diver, Brandi heads over to the “Dive Lounge” to meet her new fake friends, one of whom is Kendra Wilkinson:

Next up, the show’s probable steroid user, Drake Bell.

After his three-minute training video, he makes his way up to the 7-meter board (respect) and Charissa hits him immediately with the realest of questions:

“What makes you think you can dominate this sport?”

After rattling him, she leaves, leaving Drake up on the board by himself, ready to do just that: dominate.

And then, the dive.

Louganis loves it. NDAMUKONG, not so much:

Come on, man. Just pretend like you’re here for the purpose of entertainment and joy. Please?

After a quick judges’ critique, including a classic Judge David comment — “I see a lot of you in me” — Drake gets his score and heads back to the Lounge.

Before going to the next diver, it’s worth noting that Joey Lawrence is very good at finding the arithmetic mean. He didn’t even hesitate. He knew, instantly, that if you have an 8.00 and a 7.50, the average score is 7.75. Really impressive stuff from eldest Lawrence.

Her montage, similar to last week’s Louie Anderson tale, has less of the tone of “I’m just here to have fun,” and more “I’m here to prove something to myself … and the world.” And, like Louie’s, it is touching and now all you want is for her to do the best she can. Unfortunately, Joey, right before she dives, unearths a video (“I think we have a tape of that”) that does the opposite of build Nicole’s confidence.

Are we allowed to laugh at this? After the inspiring tale, am I allowed to say on record that, because I know she is alive, that’s the funniest thing I’ve ever seen? Will someone let me know? I really need to know if I’m allowed to go into detail about how nothing has ever been funnier than that fall.

Back to Nicole, and she’s crying.

Jerk Joey leaves, leaving Nicole up there to conquer her fears that Joey reinserted into her brave brain. She steps up, attempts her handstand, and then bails.

With the crowd very much behind her now, she shakes it off and does her dive:

Proud of you, girl.

With only two divers left, the standings:

An immediate Chastain exit would be pretty legendary. I don’t see it happening, though, especially since our next contestant is only a few minutes from attacking one of the judges: Charissa, always one to say what’s on her mind, offers this about Suh:

“He likes to get down and dirty … on the football field. Now he’s hoping to clean up … in the pool.”

I would skip his training montage, but it’s hard to ignore the first bleeped-out word of the competition.

He hit his face on the bottom of the pool, because he’s 300 pounds and is a living, breathing anchor, started bleeding, and proceeded to tell the cameraman, “Cut the [bleeeeping] camera off.”

“6. In a surprise move, Ndamukong Suh’s image will worsen with this show, after an incident involving an adoring young fan, an autograph, and a push off the high dive. (Just give it time.)”

The time has officially been given.

As for the dive: Keeping it forever the realest, she intros herself with this tidbit:

“People ask why I’m famous and my answer is, I have no idea. I don’t do anything.”

This is the best thing a “celebrity” has ever said. Ever.

Continuing, she goes on to discuss how she dislikes Greg Louganis and how she’s doing this to show people that a fear of heights is a real thing and not something to be mocked or taken lightly.

Splash is Kendra’s March on Washington.

As for the dive, Kendra is freaking out up on the board.

So is her child.

After a last-second bail on her first attempt, she scooted back up to the edge of the spring board and:

Now that all five dives are out the way, the good part of the show can finally begin. This is the reality-show embodiment of Evil Ken vs. Evil Ryu. What a landmark television moment.

Before their dives, I want to say that I hope Suh wins, but I know he won’t. You can’t bring on Chastain for just one episode. She hasn’t even had her time in the Confessional or made any drunk phone calls via the Duck Phone. Sorry, Ndamukong.

The final words of Ndamukong:

“Thank you, I appreciate all the trainers, all their time and effort. And it’s time to go to real work.”

Subtle parting “I actually have a job” shots. I couldn’t respect that exit any more.

Next week: TEAM DIVING. Oh, this is going to be bad. Can’t wait.