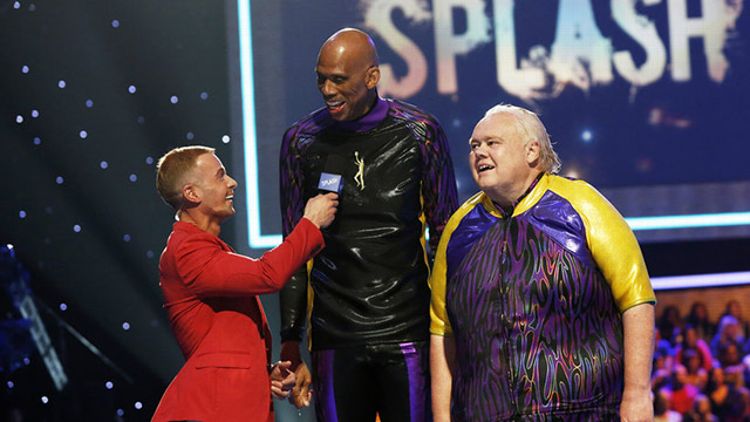 It’s Splash, ABC’s reality show about water displacement. In this, the third episode, titled “Week 3” (I still can’t believe they refuse to name these episodes), the premise of the show switches from solo dives to TEAM DIVES.

This is a very smart move, Splash. I can only hope this results in the big matched with the small, the fearless matched with the terrified, and maybe even a flirtatious pairing or two. However it shakes out, thank you for finding a way to keep me interested for another week.

In last week’s episode, “Week 2,” the field narrowed down to eight with the elimination of The SUH by The Chastain.

Before getting into the most recent episode, let’s dig the predictions back up and see how they’re holding up.

First, a glimpse of Joey:

This is great, but only improves once he’s joined by Greg Louganis.

Well then. Looks like Charissa didn’t get the “South Beach cocaine dealers” memo. This couldn’t have been an accident, they’re dressed entirely too similarly. They look like two different flavors of Tropical Starburst. I love it.

After some chatter, we find out our teams:

Brandi and Nicole, a.k.a. “Team Laaaaaadies”

Rory and Kendra, a.k.a. “Team I TOLD YOU THEY WOULD MATCH A BRAVE SOUL WITH A SCAREDY CAT”

Kareem and Louie, a.k.a. “Team Shapes and Sizes”

First up, Kareem and Louie.

In their preparation montage, we find out that Kareem has a different name for their team: “Team 10.”

Fantastic. Also, they expect to get that score, which most certainly won’t happen, but their drive is admirable.

Kareem is becoming quite good at diving, so much so that he’s giving Louie pointers. Louie, on the other hand, while not bad, is determined not only to not let Kareem down, but to also prove to the world that he’s not a liability. Of the four team plotlines, this is easily the one to root for.

And then, finally, the dive:

After some discussions from the judges, they give their scores:

Joey, your take on this?

He’s lying. This is real bad. Horrible for what was a burgeoning friendship. Aw, shucks.

Also, at this point in the show, we learn that the elimination is more dastardly than it seemed. I assumed the team with the lowest score would simply be eliminated in full.

The team with the lowest score then goes to the DIVE-OFF. And the once teammates/lovers have to then battle each other to stay alive. What a cruel world.

Next up, Nicole and Brandi, a.k.a. (as we learned from their horrendous walkout music) “Team Mom.” The lyrics of that song:

It gets no worse than that.

Their montage is sweet, a lot of motivation on the side of Brandi, coupled with old clips …

… of Nicole struggling to dive.

But, as a unit, they seem to be confident in their ability to pull off a synchronized dive, even if it’s not from the highest of levels.

Thankfully, the one thing they have going for them is that THEIR HAIR IS LOOKING POUFED TO PERFECTION.

Not too bad, ladies. Bad meaning “Louie and Kareem,” of course. NOT TOO LOUIE AND KAREEM, LADIES.

Unfortunately, before we move on to our next pairing, something horrible happens. Judge David, also known as “the worst dude,” decides to accept a challenge to dive from Charissa. But he doesn’t just walk up to the board.

Because this is Judge David we’re talking about.

But it’s not over. This is team night, after all:

WHY IS EVERYONE WEARING TEAR-AWAY DRESS CLOTHES?

As much as I want to hate on everything that just happened, their dive was just so beautiful.

Apparently, they’re on a show together called Melissa and Joey (that name comes from the “Melissa” in Melissa Joan Hart and the “Joey” in Joey Lawrence) and, for 15 seconds, they received clearance to hold the Splash viewing public hostage.

It eventually ended, allowing us to proceed to our third pairing, Drake and Katherine, a.k.a. Team “WILL YOU GO TO PROM WITH ME, KATHERINE WEBB? LOVE, DRAKE.”

The dive Greg has them doing, “The Javelin,” requires Drake Bell to pick up the larger Katherine Webb over his shoulders and then, together, simply free-fall plummet to the water.

No disrespect to Drake, but Katherine should be the one picking him up. That is, unless DRAKE IS ON STEROIDS.

I TOLD YOU. I TOLD YOU SOMETHING WAS UP.

After some decent practice tries in the montage, it’s finally time for the real thing. The nervous but happy couple:

The swagged-out Katherine Webb “I fear nothing even though I’m 10 meters in the air on Drake’s back and I’m not even talking about Aubrey, thank god he’s on ‘roids” thumbs-up of approval:

And then the dive:

That was the best thing I’ve seen on this show. Also, Katherine Webb might be a ringer. I think she’s a professional diver. Just give her the chip.

The judges agree. Judge David gave them a 10 (but not before standing on his chair and quoting Miracle) because at this point, why not?

They’re officially safe for this episode, which is great, because they haven’t even started dating, fought, and then broken up for all of America to witness.

A lot goes down in their montage. Rory’s crazy, so he will dive from anything:

But Kendra is scared of heights and doesn’t want to do anything. So then Rory decides he wants to put himself in Kendra’s shoes and try a dive he’s scared of.

And then he does it.

And then he ruptures his ear drum.

And then the doctors tell him not to dive.

WHICH BRINGS US HERE:

But the guy with the ruptured ear drum: cool as a cucumber. It’s looking as if Kendra’s going to quit, despite pleas from Rory and cheers from the entire arena.

Well, not the entire arena …

Tubbs and Crockett know that if she quits, they both survive, don’t have to battle, and most importantly, can remain best friends.

“This will haunt me for the rest of my life.”

Charissa, to Kareem and Louie, on Kendra quitting:

“You can write Kendra a thank-you note later for that.”

This is the best show ever.