Space Jammed: What LeBron’s Sequel Could Have Looked Like 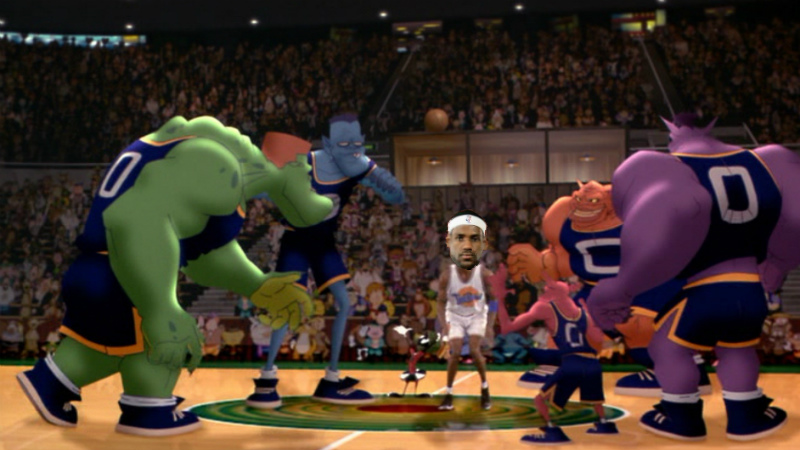 For years, Space Jam 2 has been rumored. And then, for a few hours on Friday, it was real. Very real. So un-fake, in fact, that things like “producers” and “leading actors” were attached to the project.

The headline via Deadline, Friday afternoon:

So that news broke around happy hour. By the end of dinner:

Well it was fun while it lasted. LeBron sources refute Deadline report, there's no Space Jam 2 or Warner Bros. project in works

Unfortunately for Space Jam beat writers like myself, by the time the news was reported as untrue, I’d already plowed through 60 percent of my spec script for Space Jam 2. To be fair, my script did not change much from the original, with the exception of subbing in LeBron and other current players for Michael and his fellow NBA contemporaries, as well as Kevin Hart for Wayne Knight. But there was one major change: the stakes of the game.

In the original, Michael made a bet (because Michael) that if the Tune Squad won, the Monstars would have to give back the powers to Charles Barkley, Patrick Ewing, Shawn Bradley, LJ, and Mugsy Bogues. But if they lost, the aliens got Michael. In Space Jam 2, there are also Monstars, but if the Tune Squad loses, LeBron has to go back to Cleveland.

You can argue that being a Cavalier and being a slave to a cartoon alien race are exactly the same fate, but there are some differences. I promise.

Below, the only surviving scenes from my script (once the news broke that the reports were untrue, things got ugly).

LeBron is golfing with his agent, Kevin Hart, teammate Christopher Bosh, and actor Bill Murray. LeBron, not a good golfer, hooks one to the right. But once it reaches the rough, the ball somehow begins to travel back to the green. LeBron has never hit the green before, so he’s excited, even though in his heart of hearts he knows something is up. They watch the ball as it rolls toward the hole. And then it goes in. It’s LeBron’s first hole-in-one. LeBron is dancing, while Hart has jumped on Bosh’s shoulders. Murray is worried, though, because he vaguely remembers a similar incident this one time playing golf with Michael Jordan, which resulted in Jordan getting lassoed into a cartoon wormhole by Yosemite Sam.

When they reach the hole, Murray tries to stop LeBron from reaching in. “Let’s just leave it there,” Murray says. Bosh and Hart look at LeBron and agree that he should have invited Wale instead. LeBron reaches in to retrieve his ball. And then he’s sucked into a wormhole by Yosemite Sam.

Murray shrugs his shoulders. “I told you so.” Hart screams, promotes Think Like a Man Too, and runs in the other direction. Bosh pulls on his left ear two times, dissolves into a puddle, and follows LeBron down the hole.

A confused Derrick Rose approaches a court where middle school kids are playing basketball. As Rose leans against the fence, the ball rolls to him, causing one of the kids to follow the ball, right to Rose.

Rose nods his head in the affirmative, and then asks if he can play. The kids oblige, pumped that their hero wants to play basketball with them. So Rose laces up his Adidases and walks out onto the court.

Within two minutes, Rose’s jump shot is blocked and then stolen by the same kids that were thrilled to see him.

“You’re not Derrick Rose, you’re just some wannabe that looks like him.”

A devastated Rose wants to tell them that something has happened to his powers, and this time it’s even bigger than his death trap, Adidas. But he can’t. So they banish him from the court.

“Very funny,” he says to the crowd. “Let’s all laugh at the Dawhite.”

“Quit hogging it, LeBron. We’re your teammates,” says Bugs Bunny, as he grabs a bottle labeled “LeBron’s Secret Stuff.” The Tunes were convinced it would make them incredible basketball players like MJ, so they take turns chugging the mysterious potion in the bottle. But in actuality, it wasn’t HGH. Or the Clear. Or That Deer Antler. Or even that A-Rod. “LeBron’s Secret Stuff” was nothing more than molly water, which has no performance-enhancement abilities, but clearly explains how he found himself in an animated world playing basketball for his freedom with Looney Tunes. The Tunes leave the locker room confident from their placebo potion, ready to dominate in the second half. Then Hart grabs the bottle and squeezes it in his mouth, in hopes of gaining some powers of his own. But, of course, there’s none left.

With this newfound confidence, the Tunes are up to their old tricks. They’re attaching dynamite to the opposing team’s backboard, shooting out the Monstars’ teeth with real guns, and pulling down the Monstars’ shorts by way of a fishing line, which causes LeBron — even in the heat of molly passion — to laugh hysterically with his old golfing buddy Christopher Bosh, who is somehow officiating the game in a Miami Heat jersey.

None of this matters. Because it’s not happening. Even though my script was geared toward a Tune Squad loss, setting up a third and final film involving the return of Michael Jordan playing high-stakes blackjack in Cleveland for LeBron’s freedom, it now lacks importance. And, to be honest, that’s probably a good thing. Because as fun as Space Jam 2 sounds, it’s a horrible idea. It can’t be better than the original, and could only hope to be as good, which means it would probably be horrible.

But those five hours were fun. And no one can take that away from us.