‘SNL’: Princess Anna Kendrick Triple-Threatens Us in Her Hosting Debut 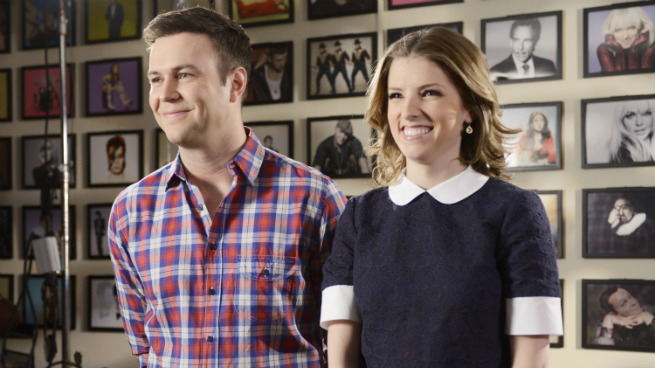 Everyone loves Anna Kendrick, a human created by the same scientists who brought us Jennifer Lawrence, It’s-It ice cream sandwiches, and Blackwing pencils: quality, craftsmanship, honesty. She seems so open and friendly that you can almost forget she has been nominated for an Oscar (for Up in the Air), two Independent Spirit awards (for Camp and Rocket Science), and a Tony (for 1998’s High Society). Not only can she sing, she can sing, play plastic water glasses, and bake biscuits all at the same time. Going into this Saturday’s SNL episode, the question obviously was this: “Can she sing and read off cue cards while dressed as a mermaid at the same time?” … and the answer was yes. Biscuits are still harder (so is K-Pop), and Kendrick has proven herself to be the Hans Zimmer of diner symphonies (that was a cheap segue to me mentioning that Zimmer made an appearance during Pharrell’s performance of “Marilyn Monroe”). This was a piece of cake.

The only real letdown during Kendrick’s SNL hosting debut was the dud (or should I say dong) of a pre-taped musical sketch about “international nasty girl[s]” who jet around the world hunting for far-flung dicks as if they were “sexual Pokemon collectors.” An Icona Pop cameo could not save this bad ship lolly-dong, though I did appreciate that Kendrick wore a fishnet hoodie, obviously in honor of the Girls in Hoodies podcast.

But for the most part, things were solid. Nothing too mind-blowing, but Kendrick’s charm made even “Les Jeunes de Paris” a little more palatable to my dance-hating taste buds (plus it contained a little French nod to “Cups”):

Speaking of things I hate, you already know that I’m not one of those people who is necessarily jumping up and down for musical monologues, but SNL really pulled out all the stops for Kendrick. If you were wondering why she seemed so breathy while delivering her opening chatter about her musical theater background and love for Beauty and the Beast, it became obvious soon enough: She was storing up oxygen for a Belle-like marathon singing tour of the studio, exchanging pleasantries with the cast (Bobby Moynihan warned her to “pace yourself, girl”) and rubbing her back against Lorne Michaels like a tabby. When the backup dancers lift each other over their heads, even cynics get into it:

Kendrick isn’t just a one-Disney-princess pony, though: She also offered up a pop-warbling Ariel, Kesha of the sea (“it’s how the humans are singing now”). When Ursula (Aidy Bryant, with a phenomenal wig) remains unimpressed, Kendrick busts out some Selena Gomez, Iggy Azalea, and Britney Spears impressions (“Womanizer” was pretty much dead-on and, according to Ursula, reminiscent of “a baby having sex”). Kendrick’s dial has been on perma-princess mode for a while — she plays Cinderella in the upcoming Disney release Into the Woods.

I have accepted Principal Frye (Jay Pharoah) as a character that exists sometimes on Saturday nights, and even though I look forward to his retirement from Booker T. Washington High and subsequent sketches revolving around his speeches given to the rambunctious residents of a nursing home (I think I’d like that more), setting this chapter in a zoo really helped me warm to it. Kendrick, dressed as a “silly little mouse,” sustained her cheerful zoo-educator demeanor through sad exercises like announcing the impending arrival of the new elephant (which the students had named “Ashy Larry”) and an update on the status of Four Loko the iguana (“named based on what you fed her”)  — but the inaudible heckling from students finally broke her spirit.

The lukewarm “Big Joe” — Big Joe (Taran Killam) might be big, but he has a bone disease that makes him weaker than small people! Can you imagine? — was offset by little rewards scattered throughout the episode: Kate McKinnon’s Chancellor Merkel on “Weekend Update”; a really good digital short featuring Vanessa Bayer, Kyle Mooney, and Beck Bennett; the NCAA tourney special “Best of the White Guys”; and another rare Brooks Wheelan drop-in on “Weekend Update” that offered a powerful personal anecdote involving a stick of butter and two marny driks.