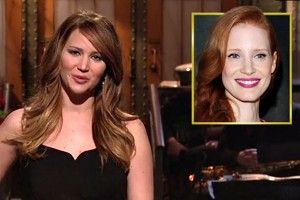 OK. You know when you’re having a really brutal week at work — you’re up late like a little tension fossil at night, you’re phoning it in a little bit in the office, you’re clean out of ideas — and then Friday comes and you slay it? You really make Friday your bitch, you punch it right in the eye? And that weekend you congratulate yourself by slamming margaritas and thinking, “I needed this vacation! I’m totally invigorated! I’m going to go into the office on Monday and punch my job in both eyes, then spit in my job’s eye! I’m back, baby!” But then Monday morning arrives and you have a hangover and you realize that you should have spent your vacation sleeping in a bathtub filled with restorative sea salts and drinking $45 pressed juices because last Friday was but a hiccup in your existential rut? Well. Here we are. It’s Monday.

I couldn’t write hilarious sketches week after week, and so I hate to criticize people or group entities whose jobs are more difficult than mine. But my job involves being honest about laughing or not laughing at Saturday Night Live, and I do it somewhat reluctantly when I am stonily wondering if a Starbucks Verismo parody is racist, or repeatedly saying to no one “That’s it?” at a strangely brief “Weekend Update” or the stalled car “Top Dog Chef.” Jennifer Lawrence: Girl, it wasn’t you.

Inevitably, across the vast Internet Panthalassa, a zillion people will wonder in the comments of every SNL recap “Why do you recap this show, and why is it still on the air?” The answer is: SNL is old, older than many adult people on this planet. There are grandparents younger than Saturday Night Live. They are very young grandparents, but they exist. And because of this fact, SNL has been both the luxury condominium of television and the hooptiest ice shanty on the lake, sometimes even within the same cast rotation. This weekend’s SNL was sort of like eating an entire box of Wheaties in the confused hope that you’re about to happen on a raisin or a marshmallow. I still believe. But that was a ton of bran.

The cold opening called on Taran Killam’s Piers Morgan to thumb through the Rolodex of the past week’s headlines: Lance Armstrong’s interview with Oprah (“I replaced all of my blood with better blood”), Manti Te’o’s unlucky imaginary girlfriend, and Jodie Foster’s Golden Globes speech. The best part of this sketch was either Killam as the “British Mario Lopez” or Kate McKinnon’s excellent Jodie Foster snatching back the “I’m 50” nugget in her claws and carrying it back into its original nest in SNL’s aviary. I’m not sure about the accuracy of Bobby Moynihan’s Te’o, but I liked the wide and swirly eyes (Mantis?) he gave the hoaxed linebacker. Was the material a little thin? Sure. But nothing terrible.

The monologue that followed, though unmusical (!), was sort of weird — because of Jennifer Lawrence’s misunderstood “I beat Meryl!” Globes remark, the sketch revolved around taking digs at her Oscar competition (to Quvenzhané Wallis: “The alphabet called. They want their letters back”; to Jessica Chastain: “More like Jessica Chastain’t winnin’ no Oscar on my watch!”) and following each with a brief, funny-killing apology (“Also, every time I see you act I learn something new”) delivered with prayer hands. Huh? Maybe this would have worked if the insults were more potent, but clearly someone was tiptoeing carefully around possibly offending anyone with this, so it wound up nibbling on its own skinny tail. I did enjoy Bill Hader planted in the audience as unamused Tommy Lee Jones. By the end of the episode, I too was making this face :C.

Yo, was this pre-taped “Starbucks Verismo” ad racist? Look, my name is one syllable and four letters and has been misheard by baristas of all ethnicities. I get that this is a thing that happens at Starbucks, because $4 for a cup of caramel solids floating in cold espresso is not enough. You have to walk around with a cup bearing the word “Plath” or “Sat” all morning. It can be so hard to be a person who enjoys fancy coffee drinks. But it almost seems like unnecessary work was put into this to make it creepily bigoted. As Gothamist points out, there is plenty of good material in Bux-slaying, none of which involves a sassy back-talking machine named Verquanica. Vanessa Bayer, as the at-home brewer Marcia (a.k.a. Shar Shar), looks all squirmy in this video, but I’m probably projecting. The worst part was that this probably would have been the best offering of the night if it hadn’t been so offensive. Plus, who voiced Verquanica? SNL hasn’t had a black female cast member in years. Yeesh.

I was relieved when “Girlfriends Talk Show” came to point the finger of mockery back where it belongs, right in the faces of non-ethnicity-specific pre-teenagers. Though this sketch was a bit stale compared with its debut when Anne Hathaway hosted (and didn’t stray a bit from its original premise), I hopped into it like it was a getaway car. Lawrence joined best-friend tweens Morgan (Aidy Bryant) and Keira (Cecily Strong) as a punk interloper who displaces Morgan and makes her feel terminally uncool because her family breeds guinea pigs (and for other reasons, but that’s the most important one). Casually and repeatedly mentioning her formative trips to New York (“two or three times” — it’s a great place to get piercings), Lawrence was subtly mean and totally believable, but despite a few good one-liners (“Everyone in New York is bi because they’re in such a rush”), Bryant was given the bulk of the script to play with.

When the requisite Hunger Games parody came next, it seemed as though Lawrence would finally be given a big shiny toy, but the resulting sketch was more like a few decent pairs of socks in a misleadingly large box adorned with the tinsel of unfulfilled joke promises and a card that read YOU WILL DISLIKE THIS WHOLE EPISODE, ENJOY! At a press conference, Katniss (Lawrence, obviously) and Peeta (Taran Killam) fielded questions from starving reporters (great blond tentacle eyebrows on Thompson) as Seneca Crane (Bill Hader) moderated. Precious few questions were posed to short-statured Peeta, so Lawrence should have had a lot to work with — and she did her best with what she had — but it never seemed like this sketch was getting anywhere.

“The Hobbit” was better, because what do Hobbits listen to if not Billy Joel’s An Innocent Man? Lawrence popped up briefly as the Elf Queen, but this one was mostly carried by Jason Sudeikis, Moynihan, Killam, and Tim Robinson as the shaggy little folk populating 19 installments of the Hobbit canon. One Hobbit busting out a credit card when it’s time to split the check? Not cool. I would probably actually see “Look Who’s Hobbit Now!” Although the studio audience didn’t react very warmly to it, the next sketch was, I thought, the best thing tossed in Lawrence’s direction all night (again, that’s not saying a lot). “50s Diner” spoofed the gimmicky mean-waitstaff casual eating experience, which, if you hadn’t heard/aren’t a masochist, is a real thing. A couple (Moynihan and Bayer) are initially subjected to some merry ribbing, but when it’s Brenda’s (Lawrence) turn to be their server, the insults turn sincere (“You’re stupid. And I hate you”). It’s personal, because Brenda has another table in stitches; she really does just loathe these two, her face looming behind Moynihan as she purrs “That water is from the toilet” like she’s going to bite him on her way back to the kitchen. This sketch felt like a ten-to-one, but in a sort of good way. I’ll take what I can get at this point.

The Lumineers performed “Ho Hey” not once, but twice: first on stage, and then in a Blue Moon commercial during the break. Assorted notes: The cellist for The Lumineers is JUST SO HAPPY TO BE HERE!; everyone in this band reminds me of Paul McDonald; “if you thought Fleet Foxes were white, you’ve never heard Lumineers!” — a friend; this is the song I would put on a mix for an acquaintance I assumed was devoutly religious and/or was over 60 years of age.

“Weekend Update” hosted just one guest, Anthony Crispino (Moynihan), the secondhand news correspondent; still, we got a comparison between the Mississippi Legislature and “30 possums hissing in a barn,” and that I will carry with me throughout my life. “Weekend Update” has stayed strong all season, so I was disappointed to see such a short installment and unpopulated news desk this week. Personally, I would have saved Te’o for “Update” and scratched his appearance in the opener: You’re telling me you couldn’t have spent five solid minutes on a cancer-stricken empty chair named Lennay? Come on! But we must plow forth to “Top Dog Chef,” which, honestly, hooked me immediately before dragging me down to the dark place where the fish with headlamps lurk. Tom Collie-cio (Sudeikis) and Padma Leash-me (Nasim Pedrad) hosted three dog chef wannabes (I hate myself for having to type that) — Lawrence, Moynihan, and Hader — who freaked out at the doorbell and created dishes out of cat turds, vomit, and garbage. And that’s that, mattress man. The snouts were great. Mario Bark-tali, OK. But other than Moynihan, whose poodle had … something, Lawrence and the rest were trapped in their canine wigs with no doggie doors for exits.

“B108 FM” (also seen in Lindsay Lohan’s episode) cast Lawrence as the buxom-but-untalented Busty Rhymes alongside Richard (Killam) and the Buffalo (Moynihan). I love the premise of shock jocks in the pre–6 a.m. spot — because owwww, ears — and I liked Bayer as reluctant news anchor MC Jigglebutt, but again: nope. The jokes fell flat and there weren’t many of them to begin with. OH LOOK MORE LUMINEERS! This song is fine because it’s not “Ho Hey.”

It’s lonely over here in my corner of “I didn’t hate ‘Danielle.’” The spin on vintage late-night Cinemax pseudoporn Emmanuelle sort of worked for me, even if just for the fact that Lawrence jubilantly played with children, smeared whipped cream on her nose, and said “I’m a buffoon.” The bad dubbing and soft, bleary lighting made me wish I were on a ton of drugs while watching this one, so if you were, great job planning ahead. I’m jelly! Lawrence seemed to get this one, even if the audience didn’t, and I felt like she delivered on what was probably one of the tougher assignments handed to a host in a hot minute. A free European woman indeed. I wonder what she could have done with better material. I suppose that question will remain unanswered, because the last sketch of the night flopped around until Lincoln (Hader) came by its deathbed to usher it out into the beyond. Robinson played an immature soldier in the Civil War, writing letters (and sending dick pics) to his lover, Madeline (Lawrence), who callously refuses to postmark him photographs of her breasts. The soldier dies, disappointed. Like most of Saturday’s viewers, except that we are still alive. I think.

Next week! Adam Levine and Kendrick Lamar. Sigh. Come on, guys. I’ve got my fingers crossed for you.