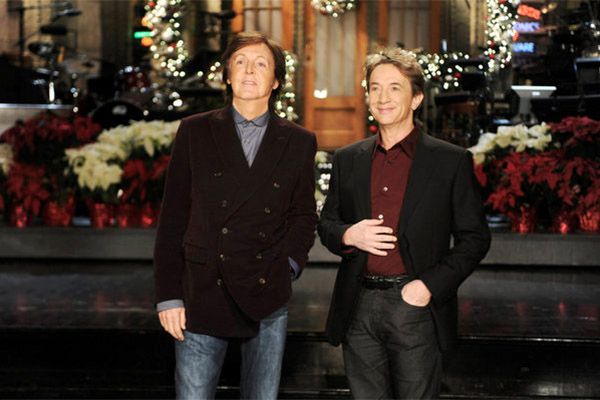 I love Martin Short, but I was still surprised at how good this weekend’s episode of SNL was. This season has been spotty to say the least, and considering the horrific event that happened one day before the taping, it seemed like the holiday-themed show was destined to be like the last two inches of egg nog in the bottle slowly separating in the fridge: Nobody wants it, but abandoning it would be like giving up. Short was featured on the tenth season of Saturday Night — a tumultuous period with some seriously weird opening credits (hot dogs, cockroaches, spray paint) — but, you know, that was 28 years ago, the 62-year-old couldn’t be blamed if he was a little rusty, even if this was his third time hosting. Plus I really didn’t want to see Short playing “Thug #2” or on a “Mission to Mars.” Luckily, we didn’t have to. Plus we got this photo of an embarrassed, post-possible-f-bomb Samuel L. Jackson out of the deal. Everybody wins!

Who can cold-open at a time like this? The show kicked off with a performance of “Silent Night” by the New York City Children’s Chorus, which was a pretty perfect way to address the Newtown tragedy without explicitly addressing it at all. Some things are unspeakable, especially in the context of a comedy show, and SNL deserves a lot of credit for handling it with a lot of dignity. I also wondered if the writers had to do some hasty rewrites or cuts on Friday night — the list of things nobody wanted to see was probably pretty substantial, and we were all in need of some uplifting material — but, if so, it wasn’t evident in the cohesive final product. This season’s musical monologue theme continued with Short’s opener with Paul Shaffer (sidekick to Letterman, “the cranky one,” and member of the SNL house band from 1975-80), during which he sang about the babymaking vibe of Christmas, “the most amorous time of the year.” Short is squirmy, and he wriggled his way over to the piano before arranging himself on it (“how would a man sit on a piano?”) in a variety of positions. He sang his way through a backstage parade of SNL friends past and present, as well as a llama (or maybe an alpaca?) on a leash, blessing them with kisses: Kristen Wiig (and her Dooneese hand), Jimmy Fallon, Tina Fey, Tom Hanks, Lorne Michaels, and Samuel L. Jackson (who killed the smooch mid-pucker with a glare). Pretty good, but what’s going on with the monologue songbook? In the cynical basement of my heart, I feel like these musical numbers are cheating us out of the one-liners that are our God-given right as people who stay up past their bedtimes. More jokes, less tunes! Our great nation deserves better!

I don’t know that I would’ve enjoyed a skit that mostly hinged upon suppository humor, but for the fact that Alec Baldwin was reprising his role as Tony Bennett as he forced me to listen to an account of a hemorrhoidal “curious eel” peeking out between “two rocks.” Short was Bennett’s younger brother Jerry, a one-time “squirt in an undershirt” who hung off Baldwin like a spider monkey (“we used to call him the barnacle because you couldn’t lose him if you tried”), doling out hugs because “they’re like kisses for your body.” Guest Kanye West (Pharoah) squirmed through the Dulcolax endorsement before taking one home to girlfriend “Kimberly,” and thanks, Internet, for making that image so much more graphic for me. I’m not saying that this was the juiciest sketch, or the most gut-busting, but I did love seeing Short hitch a piggyback on Baldwin, and I must admit that I plan to steal the line “that suit’s so sharp it must’ve been made by Ginsu knives.” And hey, since we’re down here already in the comedy of the lowlands, why not have a sketch that instructs us on the proper etiquette for examining royal heinies? “Royal Family Doctor” may have been the best of the night, featuring Short as Rupert Penington, a liaison between the Duchess of Cambridge and her new OB-GYN (Hader). Short was awesome as the gap-toothed authority on Middleton’s ah-hem (he cautioned Hader not to use the word vagina, instead relying on euphemisms like Downton Abbey, Thomas’s English muffin, chunnel, kingmaker, or Dame Judy Dench). If you meet Kate Middleton’s vagina in the street, be sure to remark to yourself that “this is great, this is so great, this is by far the best one of these I’ve ever seen” and make sure you’re wearing a small hat in case the vagina hasn’t forgotten hers against the winter chill. This is quite different from the protocol required for Camilla Parker Bowles’s vagina — you can only take audience with that ladypart if you cross a drawbridge and answer the troll’s riddle correctly.

Sorry I’m not sorry to enjoy a celebrity impression dump: You can catch me in line for tickets to see You’re a Rat Bastard, Charlie Brown, the New York Actors Studio’s “new twist on an old classic” featuring Al Pacino (Hader) as Chuck himself. Short’s Larry David (as Linus, obviously) was second in authenticity only to Junior Soprano’s accidental possession, and Kate McKinnon’s Edie Falco (Lucy) was dead-on. She’s the Peanut with the stash of Klonopin, for future reference. Remaining safely in previews forever so that it can never be reviewed, I’m sure I’ll be revisiting this one, as I have Tommy Palmese. I’m not even being facetious when I say that SNL should consider renting a theater to bring some of these parody plays to life. They’d run a lot longer than The Anarchist.

Paul McCartney’s first performance was “My Valentine,” which unfortunately lacked Natalie Portman doing the Black Swan hand flaps but was obviously pretty great anyway because HE’S PAUL MCCARTNEY, plus Joe Walsh showed up on guitar. Although. There’s something about the album title Kisses on the Bottom that makes me want to crawl into a freezer drawer and hide. I keep thinking that that’s what Wicked Uncle Ernie would have titled his album. Kisses on the Bottom. Kisses on the Bottom. The more you say it, the worse it gets.

Short was nowhere to be found on Weekend Update, which was a shame; however, am I the only person who’s totally charmed by Seth’s podiatrist son and recent bar mitzvah boy Jacob (Bayer)? Don’t tell my parents I said theeit. Jacob was enlisted to tell the story of Hanukkah, but instead gave “more of a low-level roast” of his family, with lots of 7th-grade mugging. I also enjoyed the two special Photoshopped images of animal heads in human situations (the deer pope and the emu car) embedded in the news roundup, as well as another performance by the Girl You Wish You Hadn’t Started a Conversation With at a Party (Strong). I think she might want to let go of the minstrel show joke, though, because she doesn’t need it. “What are we doing, and why, and don’t” is enough. And she raises a good point: Why can’t Secret Santa just be openly gay? It is 2010, after all.

Like always, I plan to defend “What Up With That?” until it kills me in my sleep: the BET talk show parody is one of my favorites, and this Christmas Spectacular was no exception (Sudeikis’s track suit, every time). This week’s guests were Samuel L. Jackson, Portlandia’s Carrie Brownstein, Lindsay Buckingham (Hader) and Short’s Jackie Rogers Jr., all gussied up to wait in frustrated silence as they were repeatedly interrupted by host Deandre Cole (Thompson). Except this time it was Cole who was interrupted, by either a partial or complete “fuck” and just maybe a “bullshit” as well from Jackson as he plugged his charity. “Come on, Sam, come on now, that costs money” admonished Thompson, even though this happened at midnight and sometimes I can’t believe anyone actually gives a fart about these things anymore. According to Jackson, Thompson was supposed to cut him off before he finished saying “bullshit,” but seriously, the fact that this is an issue of serious concern is a little mind-boggling. Jackie Rogers, Jr. was dressed like a glittering snowflake and Nasim Pedrad was doing a modified Sloppy Swish as the female Grinch with long green-gloved fingers, and everybody was still writhing over the loss of their ears’ virginity.

As if to make up for it, McCartney’s next performance, “Cut Me Some Slack” with the surviving members of Nirvana (Dave Grohl, Krist Novoselic, and Pat Smear), was so, so, so good. I pity anyone with thin walls, because this one was meant to be blasted. Your ears have now forgiven the disgrace of hearing an adult word on television. Give thanks.

I’m not sure I was totally feeling the “Old Friends” sketch, set in a Restoration Hardware, because who hasn’t had a more or less identical conversation with an acquaintance at the mall after an unexpected run-in? Sad lives (Armisen, as friend #1, has a gig as a James Cameron impersonator hired out for parties; Short is an actor helping to train EMTs), sad rumors (was Armisen in the Olympics? “No, that was a lie I spread”), pricey gramophones ($3,000). No jokes, really. But that’s OK, because if this was the clunker of the night, it didn’t make a noise loud enough to make me leave the room to get snacks when it hit the ground. The show ended on a solid note with what at first appeared to be an innocuous sketch of auditions for the annual Sweetwater Christmas Pageant. Short and McCartney were angling for a spot, performing as singing duo Caleb and Monty — well, not really a singing duo, because Short’s “the singer and Monty plays the triangle, which is the best part because you don’t want to hear Monty sing.” They launched into their original composition, “Holiday Time/Holiday Cheer,” until McCartney missed his dingaling cue and musical dictator Caleb dissolved into an angry fit, flinging off his vest and storming offstage. The back wall was removed and Monty became McCartney again, performing “Wonderful Christmas Time” with the Children’s Chorus. They practiced those ding-dongs all year long, you know. Besides the fact that it’s generally nice to see kids non-uniformly bopping around to music for brief periods of time, it was a great closer even if “Wonderful Christmas Time” isn’t your jam: upbeat and hopeful, just what we needed.

SNL rings in 2013 with Jennifer Lawrence and the Lumineers on January 19, which gives me plenty of time to start my Randy Marsh hosting campaign in earnest. You thought I was joking, but I am never joking.