Should You See It? A Curious Consumer’s Decision-Making Guide to The Expendables 2 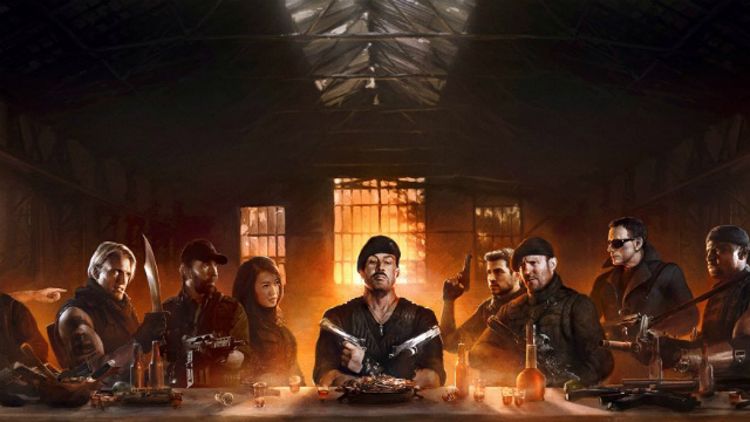 Sylvester Stallone gives and gives, and then he gives some more. He gives us his heart (Rocky). He gives us his body (Rambo). He gives us his mind (Tango & Cash), his spirit (Over the Top), his very manhood (The Party at Kitty and Stud’s). And in August of 2010, so drained by more than three decades of selfless, soul-depleting creation that he recognized that he might need to enlist the help of his friends to sustain his artistic output, he presented us with perhaps his greatest gift: The Expendables. You know the logline by now: STALLONE! STATHAM! LI! LUNDGREN! COUTURE! AUSTIN! CREWS! ROURKE! WILLIS! Guns were fired, asses kicked, face-paralyzing botulinum toxins injected in quantities that could smooth an elephant. Sly gave, and we received. Today, almost exactly two years later — an almost miraculous refractory period for a battalion of action stars approaching or surpassing Social Security eligibility — Stallone gives again. The Expendables 2. But should you open your arms — and, more important, your wallet — to receive his explosive largesse? We’re here to ask the hard questions in an effort to help determine if an Expendables ticket purchase is the right decision for you.

Did you see the first Expendables movie in the theater, and like it?

This will perhaps be the easiest call you ever make in your life. Virtually everything about The Expendables 2 is an improvement upon the original version: It’s bigger, louder, more violent, and more pleasingly self-aware. There are more explosions, more guns, more stars. Have we impressed upon you the essential MOREness of this sequel? Did you come out of the first movie and say to yourself, “That was great, but the only way I’m coming back next time is if they give me less of the things that led me to sit in this darkened auditorium for two hours and experience some measure of communal bliss. I don’t deserve that, I am a bad person, and should be deprived of that which I love.”

Still not getting it? Then how about this: Imagine finding a treasure chest that is full of your favorite things. How lucky you are! Now a genie appears, and dumps the contents of a magical, bottomless sack of your favorite things on top of your already-brimming treasure chest. You wouldn’t ask him to take away your treasure chest because it was now too treasure-y, would you? Of course you wouldn’t. You’d thank him for lavishing even more good fortune upon you, and then begin hauling your bounty to a safe place. (The paranoid thoughts about murdering the genie to protect your precious booty can wait until later. But FYI, that never really works out. Just let him go; it’s his job to grant your wishes.)

The Expendables 2 is your overflowing treasure chest. Sylvester Stallone is your munificent genie. We’re not sure of Chuck Norris’s role in this analogy, but he’s in the movie, too. You just can’t stop winning. Enjoy the ride.

Did you see the first Expendables movie in the theater, and hate it?

If so, some bad news: You’ve essentially opted in to the second installment. As much as we’d all like to believe in the concept of free will, buying a ticket for the original The Expendables is tantamount to signing a release giving Lionsgate permission to automatically withdraw one adult admission from your bank account for The Expendables 2. Your mind craves cognitive consistency, and will experience discomfort if, two years after you’ve established that you’re the kind of person who buys a ticket to The Expendables, you try to convince it that you’re no longer the Expendables type. It’s not just science; it’s brain science.

It’s not worth the effort to rewire your neural pathways. Psychotherapy’s a lot more expensive than a movie ticket, even at your fancier multiplexes.

SEE IT and avoid the painful COGNITIVE DISSONANCE. You’ll probably LIKE IT ANYWAY, it’s A LOT BETTER.

Do you have no interest whatsoever in The Expendables? Like, did you not even bother to stream it on Netflix and half-watch it while doing household chores?

It sounds like you’re looking for an excuse not to go. We can’t help you with that.

Go ahead and SKIP IT. Though, as we’ve said multiples times now, this one’s A LOT BETTER. But skipping it is unlikely to cause you psychological damage in this scenario.

What if you haven’t seen The Expendables? Will you be lost?

This movie has a plot. That plot is so unimportant we’ve already forgotten what it is beyond “they all go on a mission and shoot some guns and whatnot. Also plutonium, maybe?”

GIVE IT A SHOT.

They’re all in this! Holy shit!

Hold on. You said something about Chuck Norris earlier. Is he still in it or not?

What if you’re more of a Steven Seagal person?

Improbably, he is not in this. They’ve now had two chances to get that guy into their movies, and still no dice. His presence is missed.

DON’T SEE IT, and BUY THIS RECORD RIGHT NOW.

Was Mickey Rourke your favorite part of The Expendables?

Mickey Rourke is not in The Expendables 2. Ugh, it’s a long story. He dropped out for Seven Psychopaths, but then that didn’t happen due to complicated, jerkoff-related issues. Maybe it’s not that long of a story.

SKIP IT. Rourke’s working constantly; something else will come along soon enough.

Are you a huge fan of Nic Cage, Clint Eastwood, or Harrison Ford?

Well, let’s not get ahead of ourselves. Those names are being bandied about for The Expendables 3, but that’s no help to us at the moment, unless your goal is to support the current Expendables roster to increase the likelihood another sequel will be green-lighted — one that may or may not include those legends.

SKIP IT and live for today. The world could end tomorrow, you don’t know. Hug your children.

How do you like your cinematic violence? Are you more of a Terminator 2 person, where shooting a bunch of bad guys in the kneecaps gets the job done?

Or do you prefer more of a latter-day Rambo style of almost-winking ultraviolence?

Does the idea of hundreds of bullet-impacted torsos exploding like well-tossed gut salads excite you?

Then SEE IT, but MAYBE CONSIDER chilling out with a nice romantic comedy from time to time.

Did you think that Stallone’s manicured goatee in the first installment was just too much facial hair, and maybe he should just trim that thing down to a kind of modified handlebar situation?

His stylist agrees with you!

Speaking of Stallone’s face, do you find it a little hard to look at, given that he’s apparently chosen to fight the ravages of time with multiple cosmetic surgeries rather than just grow old gracefully?

This is a photo of Sylvester Stallone at the premiere. Yeah.

SPARE YOURSELF. And if you’re not into cauliflower ears, ALSO MAYBE STAY HOME, because RANDY COUTURE.

Can you think of any weapon/piece of jewelry/item of clothing that can’t be improved by slapping some polished silver skulls on it?

Would you like to see Thor’s little brother wear a very stylish wool cardigan?

SEE IT and go all Commes des Garçon up in this piece, motherfucker.

Berets? Are you in or out?

Who doesn’t love a nice beret? We’ve got more berets than an Eiffel Tower gift shop.

Way too much fashion talk for an action movie. Would you like to see a giant drill truck with one of those crazy, bedrock-pulverizing grinder thingies that looks like a brutalist egg-beater on the front?

The Expendables 2 features at least one giant drill truck with a crazy, bedrock-pulverizing grinder thingy that looks like a brutalist egg-beater on the front.

You might not be able to picture it right, but you’ll SEE ONE OF THOSE.

How about a Smart Car with the doors ripped off so that oversize machine guns can be more easily fired from within its hilariously ecoconscious dimensions by John McClane and a former governor of a very large state?

We’ve said too much already.

SET IT AND FORGET IT.

If we could promise you that a motorcycle would crash into a hovering helicopter in the first 10 minutes of the movie, would you be into it?

How about the first seven minutes? And we throw in some propeller boats and zip lines and crashing water towers and a giant military cargo plane with some machine guns in the nose?

We didn’t have a stopwatch going, but we THINK WE’RE SAFE IN THAT PROMISE.

Would you like to find out if Jean-Claude Van Damme can still do his patented jumping spin-kicks without his crotch falling off?

Spoiler alert: HE CAN.

Time to wrap this up: We good?

Let’s go get a burrito.

There Is Now a Bane Soundboard on the Internet. You Know What to Do.