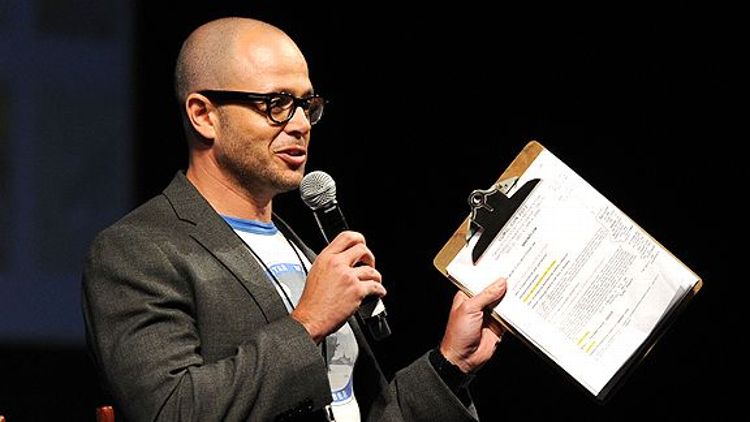 One of the biggest and most-anticipated projects at Comic-Con this year is Prometheus, a secrecy-shrouded possible-prequel to Alien directed by the man responsible for creating the franchise back in 1979, Ridley Scott. Wisely, the 73-year-old Scott declined to make the trek himself, instead sending screenwriter Damon Lindelof to face the seething, geeky masses. (Scott made a cameo appearance via Skype, no doubt interrupting a cracking polo match or some well-deserved Scrooge McDucking.) Lindelof was a perfect choice: Not only did he spend much of the last decade perfecting the art of getting people excited (and, inevitably, furious) by saying very little of substance he also speaks fluent Klingon, er, Nerd. (Actually, he very well might also speak Klingon.)

Lindelof, with his thick glasses, his dabbling in comic books, and his intense relationship with Star Wars fits right in at Comic-Con in a way that tonier auteurs like Scott never could. Which is why we suggest more directors follow this strategy: When attempting to win over entertainment’s most persistently skeptical, ultimately loyal, and often furry audience, why not hire an interpreter? This year’s gathering brought the sad sight of legendary filmmaker Francis Ford Coppola reduced to whoring his latest excursion in oddball-indieism in front of a room full of dudes in Lobo costumes. (It’s a surprise Coppola didn’t show up in a “I’d Rather Be Winemaking” T-shirt.) Wouldn’t it have been easier for everyone involved to have hired a ringer to sell their dubious goods to the occasionally washed hordes?

Comic-Con immortals like Guillermo Del Toro or Joss Whedon are available this year, and their charm, plus their ability to reference Kolchak: the Night Stalker, are guaranteed to go over like gangbusters in San Diego. And what about geek-gods like Wil Wheaton or Neil Gaiman, both of whom could earn a pretty penny talking up the latest NBC pilot or PR disaster? If Sarah Michelle Gellar gets a standing ovation merely for showing up to talk about her new gig on the CW then what kind of reaction might Nathan Fillion get? Or Eliza Dushku? It’s simply a no-brainer. And so, in the future, should Martin Scorsese ever deign to set foot in Hall H we hope he’ll do the smart thing and hire a lady dressed as Slave Princess Leia to take the podium instead.