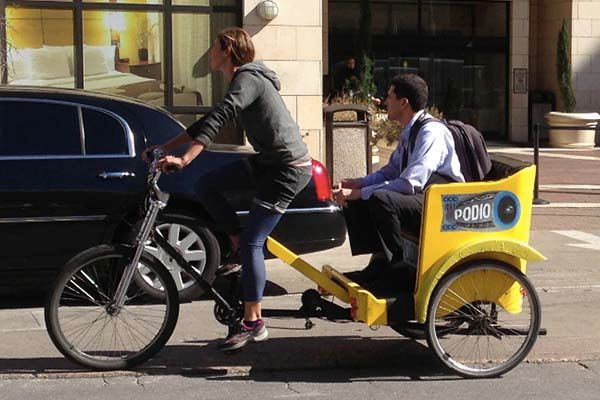 Yesterday was Day Five of South by Southwest, also known as “Crossover Day,” the point in the festival when the tech crowd heads back to Silicon Valley to either celebrate their new VC funding or move back in with their parents, and the music crowd begins to trickle in, armed with dreams, street teams, and not a single lodging plan in sight.

Additionally, and more importantly, it’s the point where you can finally restart your cycle of four T-shirts without anyone noticing, even doing the whole “oh, this old thing?” act when complimented on one, as if you haven’t been Febrezing out its must since first wearing it four days prior.

But while the demographical tide is certainly shifting, there are many constants that remain throughout the 10-day bender:

You can’t really discuss this festival, and what it does to downtown Austin, without acknowledging the controversial entity that is the pedicab. They’re everywhere. And if you spend enough time here, you start to develop connections with certain ones, for better or for worse.

There’s the Wonder Woman pedicab, the “I’m going to loop the hook to ‘Thrift Shop’ out of my speaker system” pedicab, and of course, THE THRONE:

If you’re a fan of the general premise of diversity, there’s nothing better than pedicabs. Some have blankets, others take mobile payments with Square, and a few actually have places to charge your phone while you ride.

Some, inadvertently, for their competition:

And others don’t really advertise for anyone:

Sometimes they calmly travel in their pedicab lanes:

AND SOMETIMES THERE’S A LOT OF TRAFFIC:

If you’re reading this and feel as if you’re being lured into some kind of affection for this quirky mode of transportation, know that was not on accident. And know that it was a trap. I wanted you to know what I was feeling as I warmed up to these vehicles so much that I eventually decided to solicit their services.

What happened next was the worst thing that will ever happen to me in Austin.

Running late last Sunday to an event I could’ve walked to, I spotted a passengerless pedicab a block from my hotel. Knowing that this could shave minutes off my trip, I hopped in. Immediately upon sitting down, my indentured driver revealed the first hint that this would be an unfortunate trip for my soul.

“It’s going to cost a little extra, due to the hill.”

Barely listening, I checked to see that I had enough money, and told him it was fine.

And off we were.

The experience of riding in one of these things is not unlike rolling through town on a chariot. And even since B.C. times, I don’t think anyone’s ever been excited to watch someone else travel via chariot. Quite the contrary; I’m guessing humanity’s first case of side-eye was given by a commoner toward some pompous man riding around town on a chariot.

Some of the glares I got were so rude, I completely stopped looking people in the eye as I passed them. At one point, we hit a red light, and there were people waiting to use the crosswalk with their legs. I got so uncomfortable, I faked a two-minute phone call.

I’m not proud of that, but it pales in comparison to actually taking the pedicab in the first place.

Weaving through the streets of Austin, regretting this decision with every full rotation of my driver’s wheel, I couldn’t help but internally celebrate the small victory that was probably an earlier arrival than if I had traveled by foot. I couldn’t pretend like this didn’t excite me. In my excitement, however, I had completely forgotten about the hill.

As my driver bravely powered us onward, I began to feel ashamed, embarrassed, appalled, and disgusted about myself, the life I live, and the decisions I make, as I sat back and watched this poor soul pedal my lazy, able-bodied ass up Everest.

No level of gargantuan tip given could make me feel good about this trip. The image of this man, slighter than I, in his little anklets, shifting his bike into previously unknown gears, as to make it to the summit that was free beers and barbecue, neither of which I ever deserve again, will forever be seared into my parietal lobes.

At one point, I noticed that many of the pedestrians were moving faster than we were. I then had the nerve to try to stand up out of my seat, as if that would somehow make me lighter and his job easier. The nerve.

Seeing as he was the opposite of me (a hero), my driver bested the hill and pedaled me two more blocks to my final destination. I gave him all the cash in my wallet and slunk away, saying “thank you” without looking him in the eyes, because I was in no place to face my inadequacies head-on. And then, just like that, I went on with my day, putting things into my body that will eventually make me heavier and some future pedicab driver’s life even harder, should I continue down this treacherous path I’ve decided to embrace.

— Sent from a pedicab