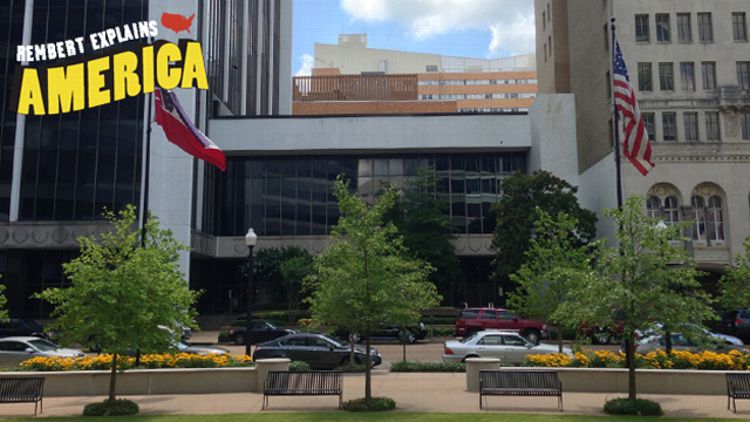 This was supposed to be about art.

As I hung up the phone, I was confused. My surprisingly long conversation with Melvin Priester Jr., the 34-year-old city councilman-elect for Jackson, Mississippi’s Ward 2, was mind-boggling. Nothing he discussed matched my perception of his city.

He told me stories of an exciting and thriving arts scene. And a place where, if you want to build it, or fix it up, or tear it down and start over, there’s not much standing in your way. A place where interracial relationships are increasingly accepted. A place where parties spring up out of nowhere, rivaling the ones he attended in Brooklyn.

I wanted to laugh. I wanted to call him out for trying to pull a fast one.

What he was saying seemed so far-fetched, however, that it made me want to check it out. What did I have to lose? This was a win-win: Either a visit would confirm that Mississippi was the worst, something as an American and a Southerner I’d been socialized into believing, or this “new” Jackson he spoke of would rock my world.

Before our conversation ended, we discussed one other topic. The city had just elected a man named Chokwe Lumumba. As mayor. Of Jackson.

And after about two minutes of digging up information on him, I was presented with an image of a man wearing a dashiki raising a Black Power fist; with potential ties to Black Power militancy and an organization that advocated for an “independent, predominantly black government”; and the fact that on separate occasions he represented Tupac and Assata Shakur in different courts of law.

Chokwe Lumumba, mayor-elect. And July 1, the day I was to drive through Mississippi, was inauguration day.

Again, this was supposed to be about art. But plans change.

It was the first thing I saw when I entered my hotel lobby at 7 a.m.

The title was a certainly a tone-setter. The piece, by Clarion-Ledger reporter Brian Eason, made it clear just how salient race was in this election and with this city.

Sixteen years have passed since Jackson’s first black mayor took office, but the third African American to hold the office, Chokwe Lumumba, will face a city troubled by many of the same racial divisions that existed in 1997. …

It’s no longer a question of whether Jackson will elect black leaders, but whom. …

Jackson remains geographically segregated, with 76 percent of its white residents living in two of the city’s seven wards.

Throughout the piece, all quoted parties are identified by their race. Initially, that seemed a bit obtuse and unnecessary. But given the context of the article, the election, and the city, its necessity became clear.

After chugging coffee and mentally preparing myself for the day, I headed to the car. It was time to go to church.

The first inaugural event was an 8 a.m. prayer service. Not knowing what to expect from a Chokwe Lumumba church gathering, I walked in and made my way to the back. Wearing dark jeans and a polo, I felt criminally underdressed for church, a place I normally wouldn’t dare enter without a suit. I quickly realized this was not a typical religious gathering. For every shirt-and-tie there was a dashiki, and for every church hat there was a head wrap. It wasn’t just the attire, though. Looking at the program, there were sections where prayers would be led by local Baptist, A.M.E., and Methodist leaders, a priest, a representative from the Islamic community, and another from the Nation of Islam community. And they were all sitting onstage together, alongside the mayor-elect, giving their prayers for the future of the city.

This sort of cross-cultural support for the new mayor was inspiring and highly surprising. Religion — Christianity — usually the great unifier, had taken a backseat to Jacksonian unity. Everyone in attendance seemed eager to escape the rut the city was in, and was hopeful that this new mayor would lead them. With that said, the focus was largely targeted at Jackson’s black population. While Lumumba’s motto for the day, “One City, One Aim, One Destiny,” was frequently invoked, it was clear in this room that there were two cities, with differing aims and disconnected destinies.

Before the multi-faith service ended, the choir launched into a rendition of “Encourage Yourself.”

Exiting the church about an hour after the service began, there was a buzz that bordered on hope. Even with little knowledge on how those in attendance felt about Jackson, pre-Lumumba, it was impossible to ignore the impact his presence had on the belief that good things were to come. Change was in the air. It was as if people left the service feeling something about their city that they’d never felt before. There was a nervousness about Lumumba — he talked a big, confident game. But his lofty goals appeared to resonate. And the people in attendance were exhilarated.

After spending a few hours trying to make sense of the prayer service, it was time to head to the Jackson Convention Center for the inaugural ceremonies. Though fascinated by the morning’s prayer service, I was eager to see more of Jackson, beyond the black religious sphere. Churches are often a safe space for some and a hurdle for others. But this was inauguration in a convention center. Neutral ground. Things would be different.

Well, it was still slightly church. The house choir was the famed Mississippi Mass Choir, singing “This Morning When I Rose.” A prayer and then a truly terrible version of Sam Cooke’s “A Change Is Gonna Come” followed this.

Perhaps it was because the song — my favorite song — was so butchered that I was slightly put off by its selection. But that wasn’t entirely it. The tone of the song, while in some ways appropriate for the event, seemed to further divide the already segmented crowd, which was to be expected. In that context, there’s a New Sheriff in Town aspect to the selection. An I’m Chokwe Lumumba and I’m mayor and there’s nothing you can do about it air.

After the City Council was sworn in and Lumumba took his oath, it was time for him to give his speech. Again, he spoke of a unified Jackson, but again, the message seemed targeted to the majority black crowd. To his credit, however, the racial pandering that the morning’s newspaper described, about attempting to appease all sides, was nowhere to be found. His allegiances were clear.

The language wasn’t completely polarizing, but there was a palpable sense of coding in the language. Some facial expressions suggested hope for a better tomorrow. Others looked worried. But Lumumba had the room. Once his speech had concluded and the ceremonies came to a close, the audience was asked to rise for the national anthem.

There was nothing inherently funny about this, but I had to quickly move to the back of the auditorium, because something about this was absolutely hysterical. Maybe it was the image of white people walking out as soon as this song began. Or maybe it was because of the Chappelle’s Show skit about Black Bush that refused to leave my head. Whichever, it was bold and I was completely rattled. Then I fixed my face and spent the next five minutes singing along, sans cheat sheet, because I learned it before the Pledge of Allegiance.

A word to the wise: If you want to polarize an inauguration in the deep South, throw “Lift Ev’ry Voice and Sing” on, and in the program, title it “National Anthem.”

I wasn’t mad at the white flight. I wouldn’t say I supported it, but I understood it. Was it rude? Yes. But one can argue that throwing on James Weldon Johnson’s biggest hit wasn’t exactly “One City, One Aim, One Destiny,” either.

I needed another break from this inauguration. Immediately.

Wearing a tuxedo, I made my way back to the convention center at about 7:30 p.m. for the “People’s Inaugural Celebration.” On the front page of the newspaper, it said “appropriate dress is required,” but based on the first two events, I had a sense of what to expect. At the entrance, there was a very pleasant welcome. These were the moments, watching people both black and white walk into an inaugural ball in which you’re first greeted by African drumming, that I had to pinch myself and remember that I was in Jackson, Mississippi. If you gave me 30 guesses a week before as to where this exact scene was taking place, there’s no way Jackson would’ve made the cut. I needed to find Councilman Priester and give him a hug.

This wasn’t your normal hobnobbing political event. There was no exclusivity. Anyone could attend, as long as you were “appropriately” attired. For an event that could have been dominated by donors and the elite, it truly was a “People’s Celebration.” Black people.

The day’s underlying current, that “same divide” from the newspaper headline, was still present. It’s hard to decide where to lay blame for this. Or whether there is blame to be laid. But with very little Jackson experience, even I can tell when a sizable fraction of a city is missing. This was the most authentic attempt at “One City, One Aim, One Destiny” yet. But again, those goals weren’t quite met.

I wanted to ask people what they thought about the demographic makeup of the “People’s Celebration,” but there was no time for that. Everyone who decided to show up, regardless of race, was trying to party.

And so we partied.

While policies and institutional frameworks often do wonders, there’s really no better way to bring people together than a party. I know that to be true from my own life, and it’s a shame it didn’t happen that night. That, quietly, could have been the beginning of something beautiful in Jackson.

Leaving the inaugural festivities about 9:30 p.m., still tuxedoed up, it seemed as if my day in Jackson was over. The downtown streets were empty, and with the exception of Lumumba’s party, there seemed to be no life. Unless it was hidden. Like under a dark bridge that was walking distance from the Jackson Convention Center.

This explains everything. Jackson’s past, present, and future. And thankfully, the patron saint that watches over Jackson somehow found a way for this place to take me in before I left the city limits.

It took 14 hours, but I’d finally found one of those places the councilman spoke of. Art was at an all-time funky, it was organically diverse, and wouldn’t you know it, it was all in the name of revelry. I was in heaven, and that was before the black guy with one arm started singing Sam Cooke’s “Bring It on Home to Me” with background vocals by the white guy with the ponytail in the heavily Elvis-influenced Irish bar with two black lady cover-charge collectors that also gave me free Domino’s Pizza in the back because I looked hungry.

After an hour of smiling and singing and talking to everyone, the band announced it was time for everyone to go home. As I prepared to walk out, I noticed a mini–Hal and Mal’s shrine across the bar.

Yes, that motto represented the ownership. But it also reflected the type of person that would frequent a place like this in Jackson, Mississippi. An oasis in a sea of tolerant separatism. After being bombarded with “One City, One Aim, One Destiny” all day, this was a more inspiring, honest, pride-filled tagline for a city.

“Jackson, Mississippi: We Are Who We Are.” Now if we can just get the rest of the city to follow the lead of a hidden drinking hole next to a bridge.

The Kardashiad, Part 17: Urinate on This Earth