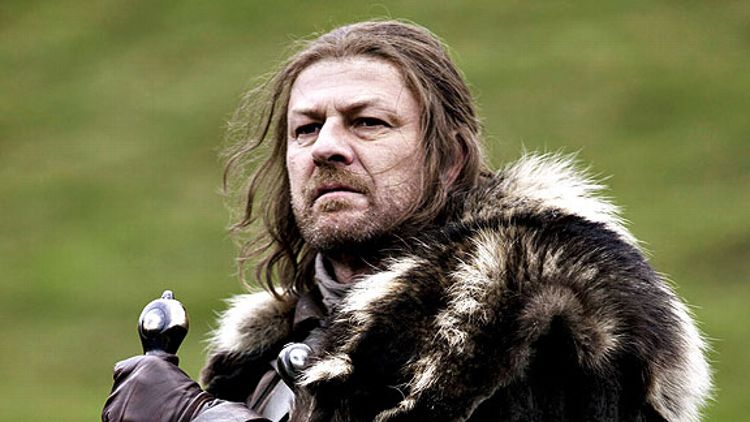 In the craggy guise of Sean Bean, Ned Stark provided a stalwart — if a bit slow — moral compass to the sprawling, confusing, nudity-filled world of Game of Thrones. Cast from the very first episode into a strange landscape of dragon eggs, direwolves, and gratuitous doggy-style sex, Ned was a man we could recognize right away as a hero, someone who was destined to bring order to the show’s chaos and vanquish the conniving, canoodling Lannisters once and for all. Because that’s what a generation of underbaked trilogies had taught us fantasy was all about, right? The good guys winning? (Also: Orcs.) (Also also: Seriously stop reading now if you don’t know what happened last night.) And then Ned kept screwing up and maybe the Lannisters were more complicated than we’d initially thought and, wait a second, that executioner’s sword means business, how is his 12-year-old daughter really going to be able to save him? Hey, why’s Ned looking up at the birds like that he couldn’t really be about to d — THWOCK! What the what! When poor Ned Stark’s decapitated head hit the ground in the final moments of last night’s shocking episode, a lot of our television preconceptions dropped with it. Primary among them? The idea that a young show can’t off its main character.

It was a ballsy move — one that immediately declared Game of Thrones to be almost as interesting as its geek-army of literate fanatics have long claimed it to be. It was also risky, as the long line of approximately zero previous programs to have attempted a similar trick will attest. (Even the bravest of shows, those fronted by death-threat-accumulating anti-heroes such as The Sopranos and Breaking Bad, only play with putting their leading men in the crosshairs. No one actually believes Tony Soprano or Walter White will go down before their final seasons do.) After all, main characters are main characters for a reason. For the audience they serve as touchstones, guides, and eventually, with any luck, friends. For the producers, writers, and show-runners they serve as a constant, a floating buoy in an ocean of options upon which to hang story, development, and years’ worth of future planning. For a network they are money in the bank: familiar faces to present to advertisers and plaster across train stations and, uh, food trucks. Thus, the sudden snuffing out of a protagonist is a decision destined to garner gasps and breathless blogging — but where can it go from there?

The only show in television history that we can remember actually attempting such a crazy move midstream is a mostly forgotten program that also dealt with the complicated internal dynamics of a family structure: the sitcom that began life on NBC 25 years ago as Valerie. In it, the titular Valerie was head of a tight-knit clan that lived in a frozen city far from the seat of national power (in this case, Chicago). Like Ned, she, too, had a heartthrob elder son, desperate to prove himself, and two other boys: one precocious, the other kind of a bastard. When lead Valerie Harper quit at the end of the second season, few thought her eponymous show could continue — and yet it did, rebranding itself first as Valerie’s Family and, later, as The Hogan Family. Rather than ignoring her absence, the producers seized the potential, killing the Valerie character off in a car accident (the modern equivalent of a Khal falling off his horse) and replacing her, again like Ned, almost instantly with an insufferable blonde imp. With the stakes raised and the status quo rattled, The Hogan Family thrived on the iron throne on network TV for another four seasons.

What sets Game of Thrones apart, of course, is its established history on the page. The producers of the show — like author/beard model George R.R. Martin — have a grand plan: The plot of their program was built with Ned Stark’s death in mind, not the other way around. The cast is bulging with charismatic, often shirtless types ready to steal Ned’s screen time — and responsibilities. The race to fill the vacuum his absence leaves behind is instantly more interesting than anything he could have actually accomplished while alive. And so, all of a sudden, Game of Thrones actually is that thing that The Sopranos always toyed with becoming and Lost almost was: a truly unpredictable show. Unless, of course, you have access to a Kindle. Then you can predict everything that will happen on the show through 2015.

Filed Under: Game of Thrones, HBO, TV, Watching the Thrones