Q&A: Sam Rockwell on A Single Shot, Playing Antiheroes, and the Mouthfeel of Accents 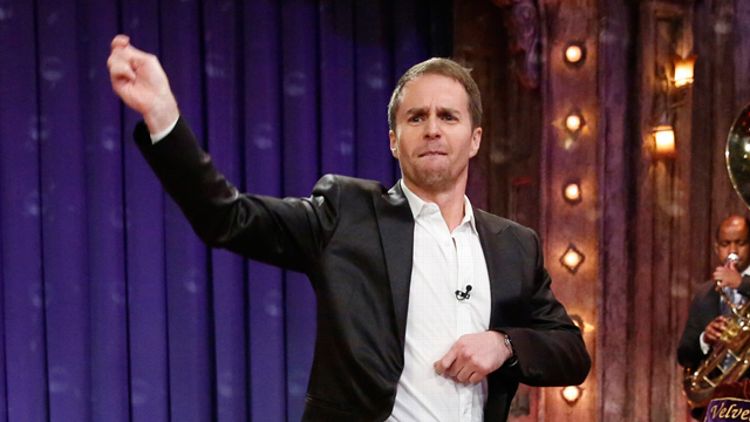 You know how we’re all supposed to be sophisticated enough not to confuse an actor with his or her role? Yes, they may have a type they’ve mastered, but in real life, they’re totally different. But some actors, you just can’t buy it. I’m pretty sure Jack Nicholson really does flash that fiendish grin at pretty ladies — I mean, ask Jennifer Lawrence. And Harrison Ford, you just know he’s that grumpy. Which is why, when given the chance to sit with Sam Rockwell for an interview, I was kind of — no, definitely — intimidated.

Here’s the thing: I like Sam Rockwell. But when I look at his filmography, from Confessions of a Dangerous Mind to Matchstick Men to Seven Psychopaths, I can’t help but imagine an overly friendly fire starter with little swirly-things where his irises should be. I mean, he even brings a touch of his specially bottled crazy to a coming-of-age comedy like The Way Way Back. But I was wrong. Rockwell was laid-back and laconic, popping pistachios while his dog nuzzled my hands. At worst, he looked like he’d stepped out of a modern-day Five Easy Pieces. Overall we had a very fun conversation about his latest film, A Single Shot (a dramatic change of pace); the art of mastering accents, and why Paddy Considine’s Tyrannosaur is drastically underrated.

I confess, when I think of your roles and films, I think of manic characters whose eyes never stay focused for more than half a second … I guess I’m asking, where does all the energy come from?

The energy? That’s a good question. Coffee? I think you just kind of have to be hungry to do it, and into something.

I realize there’s not exactly a real answer to that question.

Click here for all of our interviews with fascinating people from the worlds of sports and pop culture.
You have to be motivated. I mean, I could just sit around and drink beer but, you know, something’s got to turn you on. You got to get turned on by it and give yourself a kick in the ass. Once I get into something, though, I commit pretty hard.

No kidding. Well, what grabs you about any given role?

Someone who tracks [my roles] is probably better at answering that. I’d probably say antiheroes. I’ve done a couple of bad guys, and some comedies, but even in the comedies, it’s like an antihero. I don’t know if I’ve played a classical hero before.

You skew more Batman than Superman?

Yeah, I just would never be cast as a straight-on hero. I don’t think. A lot of my favorite actors are antiheroes: Humphrey Bogart was an antihero, Harrison Ford’s done some of that stuff. [Thinking.] Did you see Tyrannosaur?

Actually, yes. In fact, I really liked that movie.

I love that movie; I thought it was brilliant. I though Peter Mullan was great. Talk about antihero. It was amazing.

His face has a wrinkle for every drink he’s ever had. He directed this cool movie about Scottish delinquents, Neds, that never got enough notice.

Yeah, and he was in the first movie Andrew Garfield is in.

Boy A? Wow, you’re really up on your independent film.

Well, you know, that’s part of my job. But I haven’t seen Boy A. Or Neds. I’ve heard of them. But Tyrannosaur, I talk about that a lot; I feel like it didn’t get its due.

I agree. Though, they willingly committed the cardinal sin of screenwriting: They killed the dog.

Yeah … would you call that nihilist?

Well, they’re falling in love. But does it get resolved? I don’t know.

Yeah, there you go.

In A Single Shot, you play a completely different type of character: a quiet, laconic hunter. And you disappear into the role; I forgot it was you. Do you hunt, or are you just naturally good at stalking things with a gun?

No, but I’ve shot a lot of guns before. I got some lessons on this particular gun and talked to deer hunters, how to hold the gun and shit like that.

Hah, yeah. It was a lot of fun. Like boy camp or something. Though, it was camping with catering. We commuted every day, an hour’s commute each day.

Oh, right, it was shot in Vancouver — Vancouver is also surprisingly good at playing West Virginia.

Yeah, it really is a good double for West Virginia. Originally, it was set upstate in New York and we changed it because we just thought it would be too much, with the dialects, to get everybody on the same page. We thought West Virginia would be much easier, and it would lend itself to the story.

I didn’t realize the Upstate New York accent was so hard. Is it like Boston Southie or something?

Ever see Brother’s Keeper? It’s like that. I mean, that would’ve been great to take that on. I don’t know. We just felt it was a small movie; it would be too much. We couldn’t afford a dialect coach on set, so everybody was on their own. And we had a lot of English actors, an Australian … I think Southern is just easier for everyone.

What’s the hardest dialect to get right?

Boston. When I did Conviction, that was tough, but once I got it, it was a lot of fun.

Hah, yeah. It was really fun. I had one of the best dialect coaches in the world, Liz Himelstein, who did Fargo, and she helped me with this, too.

Oh wow. Fargo has, for me, by far and away the world’s best dialect-driven scene. Remember when the cop visits the old guy in his driveway?

Yes! That’s a great scene. Isn’t he raking or something? Really, that movie, they fucking nailed it. Dialects are tricky but fun. I think one time I did a Polish dialect for something. I’ve done East End for theater, plays in London, and it takes practice.

Yeah, every five blocks of London has its own dialect.

It’s very intimidating. I think Europeans, they watch a lot of American TV, and they’re used to hearing all these different American dialects.

Right. And what do we watch, Downton Abbey?

That’s right, Manchester, West Ham — every region you could think of. It’s kind of like an extra job.

I’ve always wondered, is doing a dialect more a help or a hindrance? When you get it, are you always juggling it or does it help you disappear into a character?

It can inform the character. But you have to be careful. It’s a pain in the ass. I think when people do it well, they’re always on top of it. I think the trick is to rehearse the lines without the dialect, and then rehearse the dialect independent of the text. So pick up The New Yorker and just go …

[Rockwell picks up a spare The New Yorker and starts reading at random in a pretty damn good South Boston accent.]

… “Lynn Hawhn, a woman in hur mid-thurties wuz assailed by suspishun—” so the lines don’t get stale.

Wow, impressive. How do you know when you have it?

The dialogue has to be nimble in your mouth. If you’re really proficient, you can improvise but it’s tricky. I mean, I don’t know how Ben Affleck doesn’t have a dialect coach on set. Everybody is sort of on their own, I find it shocking. But they obviously know what they’re doing — they’ve made some great movies.

By the way, I don’t think I’ll be able to read The New Yorker without thinking of Boston now.

Yeah, hah. I did a play that took place in Rhode Island, and when we were doing Conviction, we would read that play, Liz and I, ’cause it would lend itself to the accent. So, I think that’s a really good exercise. If you’re doing A Streetcar Named Desire, read another Tennessee Williams play, Glass Menagerie, or whatever. It’s good to do that, I think.

How did you master the West Virginia accent?

I had samples. There was a documentary The Wild and Wonderful Whites of West Virginia, a bunch of drug addicts from West Virginia, pill-popping. It’s this family &#8212 you should check it out. It’s kind of a sequel to this one, about one of the members of the family: Dancing Outlaw. This one’s more about the whole family, and the women in the family, they’re drug dealers, fucked up.

Putting it on the Netflix queue. The only West Virginia film I’ve ever even heard about is Matewan.

All right, so what accent is next for Sam Rockwell?

I should probably get back to the British accent again. That would be fun to do in a film. You have to find the right role. I’m out of practice.

What about a California surfer accent?

The closest thing I ever did to that was Hitchhiker’s Guide to the Galaxy. But that was actually kind of Southern and Elvis-y.

Yeah, that was insane. That was kind of Bill Clinton and George Bush and Elvis mixed together. But it was more Southern, but there was a surfer quality to it.

Do You Like Prince Movies? Podcast: The Toronto International Film Festival and Arsenio Hall

The 1975: Ruthlessly Catchy and Accidentally Interesting