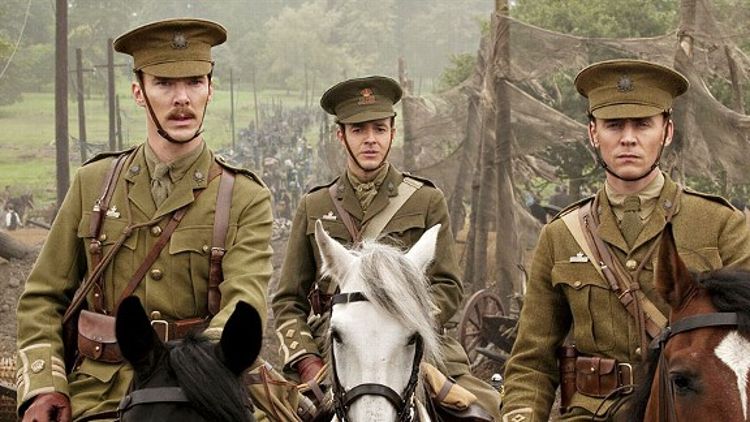 The most sentimental and manipulative movie of 2011 stars a great, stoic beast that is something of an enigma to those around him. Lacking words, he seems to have an almost human sense of what people need and expect from him — although they often underestimate his strength and endurance. Some audience members may be irritated by the self-consciously mythic way he’s presented, or by his uncanny, not particularly believable ability to survive despite the carnage that surrounds him. And it’s easy to feel jerked around by a score that seems to oversell his heroism at every turn, or by a visual style that overtly evokes movies from decades earlier. But by the climax, your heart may swell when you realize that he’s come through, the hard times are over, and he’s going to be okay. Don’t you hate sappy clichés like that? I do too. Nevertheless, I very much enjoyed Ryan Gosling in Drive.

More than in any recent Oscar season, the words “sentimental” and “manipulative” are being tossed around as insults intended to disparage not just the movies they reference but the filmgoers who, in this particular construction, have presumably been suckered into liking them. It’s a silly argument: You may adore or detest The Artist, War Horse, Midnight in Paris, or Hugo, but manipulation is not a legitimate reason for hating them, because there isn’t a movie out there, good or bad, that doesn’t seek to pull strings to inspire some kind of emotional response in its audience. It’s all about how effectively those strings are tugged, and what they connect to.

In any case, how much of that string-pulling is working right now? Perhaps the most notable idiosyncrasy about this year’s Oscar race is that said audience has so far proved pretty indifferent both to the Academy Awards contest and to the films that are leading it. We can argue until we’re purple about whether The Artist is a loving tribute to a bygone style of moviemaking or just a slick, surfacey pastiche, but even if the movie ends up sweeping the Oscars, the box office numbers suggest that it’s never going to be more than a middling success. Audiences have been given every chance to swoon for Hugo, and they haven’t, nor will they even if a thousand critics insist a thousand times that nobody ever understood 3-D before Marty. The Descendants feels like everybody’s third choice, both in the Academy and at the multiplex. The Tree of Life was an art-house hit, period. And Midnight in Paris was the most astonishingly huge grosser in the entire history of Woody Allen — which means that it made about as much as Tyler Perry’s Madea’s Big Happy Family and didn’t even crack the top 50 of 2011.

As of this moment, the only Best Picture contender that qualifies as a smash is The Help, which has pulled in more than those five movies combined. And for those of us, including me, who wondered if the year-end holidays would be a game-changer: They were not. The year ended with the cheerless statistic that the number of movie tickets sold in 2011 hit a 16-year low. And the last big entries in the contest, War Horse and The Girl With the Dragon Tattoo, have both done enough business to stay in the awards conversation, but not enough to reshape it.

The Oscars are not a barometer of popular taste (nor should they be), but that’s not to say that popular taste has nothing to do with the balloting. Academy voters want their own convictions ratified by something external, and if it’s not blockbuster grosses (and this year, it certainly won’t be), then it has to be great reviews, or a slew of ads informing them that some company is willing to spend a pile of money to encourage their vote in a particular direction, or — the hardest thing to quantify — a shared intensity of feeling among some of their peers. A conversation between two voters that begins “You know what I really thought was the best performance of the year even though nobody’s talking about it?” and ends “You did? So did I!” is a conversation that is going to lead to two first-place votes for some lucky actor.

With a number of the nominees in each category already clear, the final, close-call choices will come down to passion versus consensus — and those battle lines, at least, are fairly clear. The Tree of Life is a passion pick for those in the Academy who love it. If you’re a voter, it’s probably either no. 1 or no. 2 on your ballot, or nowhere near it. The performances of Michael Shannon in Take Shelter and Michael Fassbender in Shame are also passion magnets because they represent bone-deep commitment within movies that face uphill struggles for mainstream acceptance. The same holds true for Tilda Swinton, whose intensity in We Need to Talk About Kevin seems to have singed off her eyelashes, and whose admirers are almost unnervingly devoted to her.

At the other end of the spectrum, Melissa McCarthy in Bridesmaids is a passion pick, because she has to overcome an Oscar-unfriendly genre in order to reach the final five; a vote for her is not just a vote for a terrific performance, but a vote to make a point. As dubious as I am about whether he belongs in the Best Supporting Actor category at all, Andy Serkis would undeniably be a passion pick, as would Jessica Chastain (although more for her exemplary body of work in 2011 than for The Help in particular). And so would any nomination, in any category, for Drive (except for Albert Brooks, who is lucky enough to be both a passion pick and a consensus choice).

Recognition for Margaret would, of course, represent the ultimate passion nomination. Last week, Fox Searchlight finally (and wisely) reversed itself and sent out Academy screeners for this too-little-seen movie (which also, fortuitously, is enjoying a return theatrical run in New York). Although the change of heart was probably too little too late, it still represents a welcome decision to give voters a chance to see for themselves what the fuss is about — and I remain hopeful that the writing and acting branches will at least give it a look. (Come on, voters! You can slot it into your viewing schedule in place of The Iron Lady, which I’ll save you two hours by nutshelling for you: Streep — yes; screenplay — no; Thatcher — still not a fan.)

Any nomination from the passion list would be, for its coterie of boosters, a fist-pump occasion, a moment that might affirm that you’re not alone in your ability to identify something special. But fist-pump choices are often long shots, because they have to displace candidates who make the list for other reasons. And those other, more run-of-the-mill nominations happen all the time. Shannon or Fassbender could easily be left in the dust by an A-for-effort nomination for Leonardo DiCaprio in J. Edgar: McCarthy could just as easily fall by the wayside because of a let’s-nominate-this-movie-for-absolutely-everything! nod for The Artist’s Berenice Bejo. It’d be lovely, at this moment, to imagine that quality, discernment, and conviction will trump all else. But right now, the Oscar race is rivaling the GOP primary contest for Most Money Fruitlessly Spent In Order To Circle Back To A Result That Felt Grimly Inevitable Several Months Ago. When it comes to Academy voting traditions, autopilot and overkill are at least as venerable as passion. And with just ten days left before balloting ends, it’s getting awfully late in the day to hope that Oscar voters will pluck a movie from that stack of unwatched DVDs and suddenly and unexpectedly fall in love.

Previously:
Oscarmetrics: The Case for Brad Pitt, Plus Six Questions That Could Reshape the Race
Oscarmetrics: Hugo, The Artist, and 2011’s Faux-Nostalgic Race for Best Picture