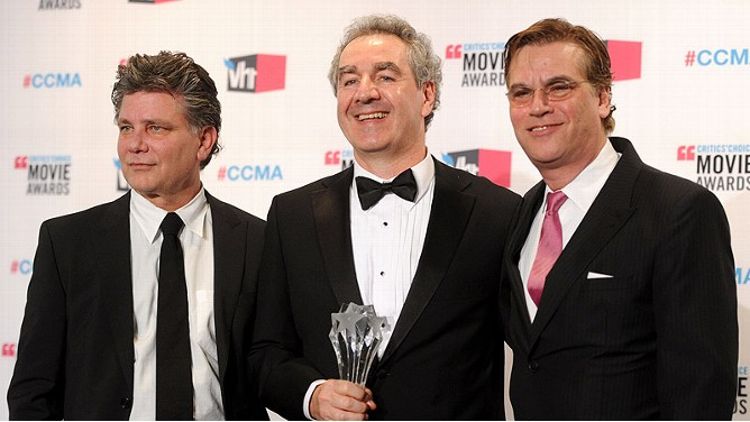 It’s over. No more surges or collapses, no more micro-measurements of momentum, no more fingers to the wind. Voting for the Oscar nominations has closed, and the results will be announced bright and early on Tuesday, January 24, so every day this week I’ll be rolling out my predictions. Take these to the bank! Actually, please don’t. It’s not easy trying to crystal-ball the collective, aggregated taste of Pedro Almodóvar and Ernest Borgnine and Peter Dinklage and Olivia de Havilland and the guy who shot The Wedding Planner and the costume designer of Vanilla Sky. Throw in more than 5,000 other voters and you have, at best, barely educated guesswork. With that in mind …

The field: First, a reminder. Only the 375 members of the writers branch of the Academy are eligible to vote for these nominations, and as I’ve noted before, their taste consistently extends to darker and more complex material than the Academy as a whole is willing to embrace. But we may be about to run into an exception to that rule, since this year, the challenging stuff is really challenging. The Iranian drama A Separation is, no question, the most acclaimed foreign-language film in the race, and recently picked up a Best Screenplay award from the National Society of Film Critics. But difficult movies need time to build Academy support, and its post-Christmas opening may have been a misjudgment. Writers admire Terrence Malick enough to have nominated him before (for The Thin Red Line), but The Tree of Life has struggled more with old-guard industry types than it did with critics, and Malick probably has a better shot at breaking through in the directors’ branch. Had Fox Searchlight been quicker off the mark, Kenneth Lonergan’s Margaret might have had a genuine shot at a nomination in this category, but the movie, the brilliance of which only grows on second viewing, remains the longest of long shots. Take Shelter is a superb film for 99 percent of its length, but in its last minute, Jeff Nichols’s script opts for a Twilight Zone eye-roller of an ending, the kind of “Or was it?!?!” flourish that may leave gimmick-averse writers with a sour aftertaste. And the weird magnificence of Lars von Trier’s Melancholia isn’t likely to resonate with enough writers to have an impact even if he hadn’t said all that stupid Nazi stuff.

What that leaves is primarily comedies, dramedies, and warmedies. Woody Allen is not quite a rubber stamp — he was surprisingly omitted a few years ago for Vicky Cristina Barcelona— but Midnight in Paris has proved such a milestone that his 15th writing nomination is guaranteed. (That extends his own record in the category; even Billy Wilder only managed 12.) Early in the run of The Artist, the notion was floated that writers might balk at nominating a movie with no dialogue, but it bears repeating that voting isn’t precise or scientific; writers, like everyone else, vote for movies they enjoy, and overall momentum for the film should assure a slot for Michel Hazanavicius’s script.

And then it gets trickier. Kristen Wiig and Annie Mumolo’s Bridesmaids has benefited from an aggressive campaign by Universal, and it doesn’t hurt that the movie is by far the biggest box-office success of any original screenplay this year. However, no film with Judd Apatow’s name on it has ever cracked this category before — writers, it turns out, can be as snobbish and blinkered about comedy as every other branch, so its omission wouldn’t be a complete shock. I still like the chances of Thomas McCarthy and Joe Tiboni’s work on Win Win, the kind of thoughtful, grown-up, character-driven movie the writers branch likes to nominate (see also: The Savages, Lars and the Real Girl, A Serious Man, Happy-Go-Lucky). But the same criteria could also be used to justify nominations for Mike Mills’ Beginners and Will Reiser’s 50/50; both films have the near-irresistible hook of life-threatening illness on their sides, although the first may feel too slight and the second too young. That roster could make it a lot tougher for Juno Oscar winner Diablo Cody to return to the competition with the black comedy Young Adult, a movie with a gleefully nihilistic screw-you of an ending that has rubbed some voters the wrong way.

Does that leave room for anything serious — say, the earnest social topicality of Eric Eason and Roger L. Simon’s A Better Life, or the crackling boardroom dynamism of J.C. Chandor’s timely Margin Call? My hunch is that it does, since you’d have to go all the way back to 1990 to find a slate of original-screenplay nominees that did not include a single drama.

What I’m probably wrong about: Margin Call and/or Win Win. All things being equal, I’m going with my own taste. When it comes to Oscar predictions, that’s almost always a mistake.

In my dreams: Margaret or The Tree of Life get in.

In my nightmares: Bridesmaids doesn’t even make the cut and Kristen Wiig has to sit at home listening either to some cutesy-poo speech about how “Uggy would like to thank the Academy” or to the sentence, “Woody Allen couldn’t be here tonight, but …”

The field: Easy call: Moneyball is in, which means that not only do two past winners, Steven Zaillian (Schindler’s List) and Aaron Sorkin (The Social Network), each get a chance to repeat, but Stan Chervin, who wrote early drafts and received a “story by” credit, gets a nomination as well. Also looking very secure are Alexander Payne, Nat Faxon, and Jim Rash for The Descendants; Payne is one of those writer-directors who is in some ways considered more writer than director, and while I’d argue that a number of the problems with this movie (programmatic quirkiness, tonal inconsistency passing itself off as idiosyncrasy) are writing issues, that ship has sailed. Payne has been in the category twice before (for Election and Sideways) and this will make three.

Hugo, by contrast, is seen as more of a directorial than a writing achievement, but two-time nominee John Logan is coming off a year in which he demonstrated remarkable range — has any screenwriter had three credits in 12 months as diverse as Hugo, Rango, and Coriolanus? I suspect writers will tip their hat not just to his accomplishment in Hugo, but to the difficulty of wrestling a 523-page illustrated children’s book into a feature-length screenplay.

In filling the remaining slots, the writers will have to weigh both degree of difficulty and success of execution. To my mind, Steven Zaillian deserves a medal for figuring out how to jettison 350 pages of the novel The Girl With the Dragon Tattoo and still preserve a coherent mystery, an origin story for Lisbeth Salander, and just enough of that money-transfer nonsense at the end to satisfy fans. To the extent that any movie has surged in the final two weeks of voting, it’s this one. But ironically, his adaptation of Dragon Tattoo may be penalized for exposing, via all that judicious weeding-out, the weakness of much of the original material. That’s not a problem for Tinker Tailor Soldier Spy, adapted by Peter Straughan and his late wife, Bridget O’Connor, who died before the film was made, and to whom it is dedicated. Competing with the memory not only of John le Carrê’s novel but also of a six-hour miniseries, the movie is an impressive distillation of a densely complex piece of work (although some detractors just find it incomprehensible, the fact that it won le Carrê’s endorsement doesn’t hurt, nor does its better-than-expected box office).

That makes a very credible five — if you leave out Lee Hall and Richard Curtis for War Horse (which is having enough trouble getting awards attention in other categories), Eric Roth for Extremely Loud and Incredibly Close (a reminder that the best intentions and an impeccable roster of talent can sometimes add up to an awards-season wet firecracker), and such also-rans as Christopher Hampton’s script for A Dangerous Method (maybe too talky) and Hossein Amini’s Drive (maybe not talky enough). But there’s one last complicated question: The Help. First-time screenwriter-director Tate Taylor, who turned his adaptation of longtime friend Kathryn Stockett’s novel into a bigger hit than anyone in the industry predicted, is one of the year’s Cinderella stories — but his rookie mistakes are also all over the screen. “A mediocre movie saved by its cast” is the dismissal I’ve heard from a lot of writers; if there’s a shocking omission that isn’t all that shocking, this will be it.

What I’m probably wrong about: I’m assuming we’ve got six movies trying for five slots, and, since voters may not feel a need to nominate Zaillian twice in one category, Dragon Tattoo is the sixth. But it could easily displace one of the above films.

In my dreams: Rick Jaffa and Amanda Silver’s exemplary summer movie Rise of the Planet of the Apes blows some of the prestige-film dust off this category.

In my nightmares: As The Help sweeps to victory, plans are announced for the Broadway musical version of the novel, jauntily retitled Eat My Shit! After the show, which stars Audra McDonald, dominates the 2014 Tonys, a musicalized film version, retitled A Piece of My Pie!, goes into production. The film, which stars Rihanna, is only a mild success, but it does serve as the basis of the hit 2018 sitcom As Sweet As Pie, in which the character originally played by Viola Davis is now played by Emily VanCamp because, as the future head of CBS explains to a skeptical press corps, “We don’t see it as a story about race or anger. It’s a story about people and hope.” President Santorum becomes a huge fan of the show and uses it to justify cutting all remaining social programs because “it proves that everybody is the same amount of equal.”

Filed Under: Aaron Sorkin, Moneyball, Oscarmetrics, The Artist, The Girl With The Dragon Tattoo, The Tree of Life