Orphan Black, the Pre-Recap-Era Throwback Sci-Fi Show You Should Catch Up With 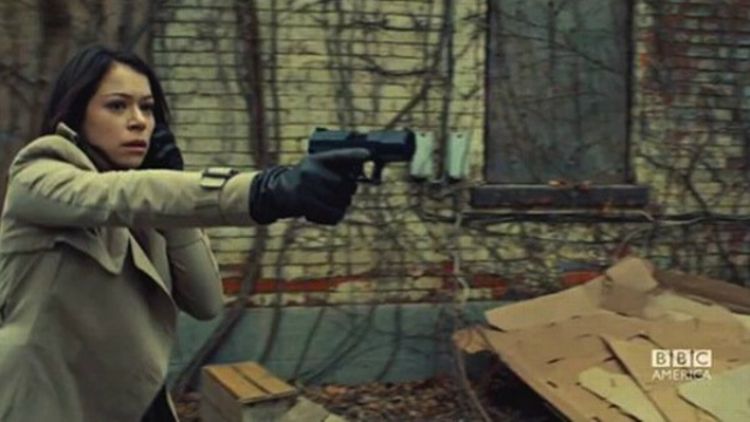 The early-to-mid ’90s were the best time to be a fan of TV sci-fi. That’s not to say that’s when all the best TV science fiction shows were airing, since nothing could be further from the truth, but it was a time when there were enough sci-fi shows worth discussing — The X-Files, first and foremost, but also the final seasons of Star Trek: The Next Generation, the beginning of Star Trek: Deep Space Nine, Babylon 5, the Hercules/Xena franchise, any number of one-season oddities on Fox, etc. — and the beginnings of widespread acceptance of a way to discuss them.

Before the Internet’s gradual takeover of American society (a process that roughly coincided with the run of X-Files), if a Star Trek fan wanted to discuss that show, he had better hope he knew somebody who watched or had a local convention to attend. In the early days of the Internet, though, “build your own homepage” sites like GeoCities and Angelfire created havens for television discussion that would presage the recap-driven era of TV criticism we live in now. And, this being the Internet, those sites usually were built around shows with heavy science-fiction elements. (King of the TV recaps Alan Sepinwall got his start writing episodic reviews of a non-genre show — NYPD Blue — but he’ll freely admit that he got the idea from old Usenet reviews of TNG by Timothy W. Lynch.)

It may seem strange to have nostalgia for those early days of the Internet, but going back to the days when a Sarah Stegall or Autumn Tysko would breathlessly review every episode of X-Files after it aired is a reminder of just how revolutionary the Internet seemed in the mid-’90s, how much it seemed as if it would connect all the lonely fans, who loved this weird, out-of-the-way show but couldn’t find anybody with whom to talk to about it. And then their phone lines came alive and seemed to deliver those people into their home offices or living rooms. To browse through those early days — or what’s left of them, anyway — is to see a bunch of people realizing their weird pop culture affections need no longer be private.

We’ve gotten away from that, for what are obvious reasons. Now seemingly every site on the Internet employs somebody to write about Mad Men or Game of Thrones, and if you look hard enough, you can find weekly recaps of just about every show on the programming guide, with boisterous comments sections to go along with them. Even a show as low-rated as HBO’s Enlightened prompted intense reaction when the network canceled it, to the degree that it sometimes seemed like more people were upset about its cancellation than had watched it to begin with. The process that began in the mid-’90s has reached its logical end, and we now live in the world of niches.

It’s been particularly fascinating, then, to watch the rise of BBC America’s terrific original series (co-produced with Canada’s Space channel) Orphan Black and feel something of a return to that era when most weekly TV reviews were being carried out by fans. To be sure, there are more than a few professional sites that write weekly reviews of the show. (I work for one of them.) But the series has rather limited viewership — regularly dipping below 500,000 viewers — and outside of a richly deserved Critics’ Choice Award nomination for its star, Tatiana Maslany, the show seems to have slid out of the critical consciousness after an initial batch of mixed-to-positive reviews. It’s a creature of the Internet now, and that’s where its biggest fans live.

To be sure, almost all of this has to do with the fact that the show airs on Saturday, the least-viewed night of the TV week. If Orphan Black aired even on Friday, there would likely be slightly more attention paid to it at most mainstream publications. (See also: Fringe.) But the combination of its out-of-the-way time slot and its intensely geeky science fiction conceit — which, without spoiling too much, involves a young woman discovering a secret twin she never knew she had and spirals outward from there in ways both predictable and gloriously unexpected — makes it feel like a cultish secret shared among a few viewers, all of whom are intensely devoted to it and all of whom must turn to the Internet to find anyone who’s ever even heard of it.

It’s worth stating that none of this would be the case if Orphan Black weren’t as good as it is. The show’s plotting is tightly serialized, but outside of a few missteps near the middle of this first season (which ends on Saturday), its overriding mythology hasn’t threatened to completely swallow the show whole. And as central character Sarah — and a host of others — Maslany is giving one of TV’s two or three best performances, a daring tightrope walk between being over-the-top and gimmicky and incredibly naturalistic while playing seven or eight different characters, at least four of them “regulars.”

The rest of the regular cast is very good — particularly Jordan Gavaris as Sarah’s best friend and foster brother, Felix — but this is Maslany’s show, and she’s electrifying, switching between personas with ease and sometimes even switching between personas pretending to be other personas with an acute understanding of just what each character would immediately start mimicking in another. And here’s another link to those mid-’90s shows: Like David Duchovny, Gillian Anderson, Sarah Michelle Gellar, Jennifer Garner, and many others before her, Orphan Black’s fan base has incredible devotion to Maslany for offering a performance of this caliber in a genre where many other actors get away with coasting. They hope and believe she’s a star in the making, but for now, she’s theirs.

What’s more, the show effectively splits into several different shows, depending on which Maslany viewers are following at the time. Soccer Mom Maslany stars in a heightened suburban soap opera with acid wit and satirical bent. Graduate Student Maslany stars in a goofy, winning science fiction story about genetic manipulation and the future of the species. Sarah, who assumes the identity of the aforementioned secret twin in the first minute of the first episode, stars in a surprisingly thrilling cop show crossed with an overriding mystery. (Who is killing the many Maslanys? And why?) Still another character is at the center of a tale of horror, torture, and woe, a sort of Gothic novel update for the post–Human Genome Project era. And the list goes on, to incorporate even more shows and styles of shows, depending on which version of herself Sarah bumps into that week.

It’s that element of being all things to all people that gives Orphan Black its final connection to the mid-’90s sci-fi shows that started the TV recap boom. At all times, Orphan Black is skating narrowly ahead of being absolutely and utterly terrible. Maslany’s performance can only do so much, and the show will toss in things like a lab assistant raising his eyebrows suggestively at two women kissing in front of him, plucky music bubbling away on the soundtrack to let viewers know this is all supposed to be cheeky fun, or some of the broader scenes in that suburban satire, which occasionally feel like Desperate Housewives run amok. There’s also the fact that almost all of the budget has seemingly been devoted to making sure the many Maslanys overlap believably, leading to cheesy production values elsewhere. The show never looks bad, but when compared to the big-money values of something like the far worse Revolution, Orphan Black can look like it’s been thrown together with whatever spare change creators Graeme Manson and John Fawcett found in their cars before shooting that day.

But that was the case with early X-Files or Xena: Warrior Princess, too: It would have been so easy for either of those shows to be so bad, and that other, far worse version of each show poked through just often enough to provide ample opportunity for fan snark. Yet those shows inspired the kind of cult, fannish devotion Orphan Black has for the simplest, most potent similarity of all: They understood that story and character came first, that excitement and thrills are all well and good, but they only work if you give a shit about the people who are in harm’s way. To be sure, there are interesting ideas in Orphan Black, about what it means to be an individual, what events in our lives make each of us who we are, and even what the roots of human sexuality are, but at its heart, this is a series about a woman who finds herself confronted with that which would dehumanize her and fights back to assert her very sense of self in the face of technology that would reduce her to a mindless automaton. Is it any wonder the Internet loves this show?

Todd VanDerWerff is the TV editor of The A.V. Club. His writing also appears in the Los Angeles Times.

Girls in Hoodies Podcast: Behind the Candelabra, Mad Men, and Leo in Space

Serial Killers, Magic Thieves, and Feelings: The Many Harried Cops of Mark Ruffalo