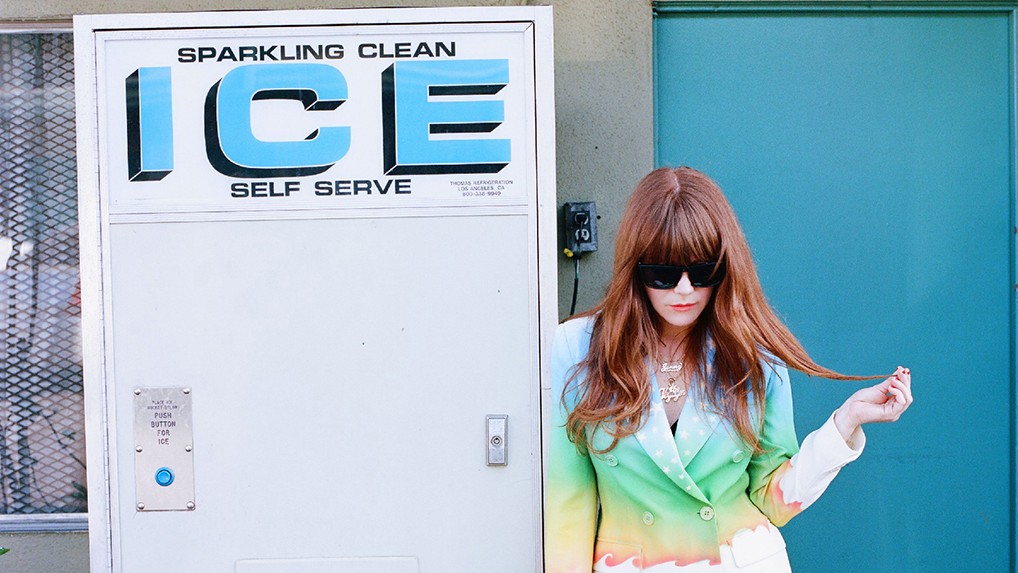 On her excellent 2006 solo debut Rabbit Fur Coat, Jenny Lewis covered Traveling Wilburys’ “Handle With Care” with three other defining figures of ’00s indie singer-songwriterdom: Conor Oberst, Ben Gibbard, and M. Ward. At the time this seemed both reverent and a little bratty. The symbolism wasn’t subtle: This was a collegial bunch of pals emulating a collegial bunch of much more famous pals. Lewis and her cohorts had exhibited an affinity for boomer-era rock on their own, and now they were deliberately connecting their work to their wizened forefathers.

Looking back, covering “Handle With Care” stills seems a little bratty … for Oberst, Gibbard, and Ward. Not so much for Lewis. Unlike her peers, Lewis has fully grown out of her indie adolescence — her new, also excellent LP out next week, The Voyager, has a gravitas that is decidedly adult without ever coming off as forced. She’s still writing funny and smartly observed vignettes about searching for meaning in all of the wrong places — on the road, in bars, and in dead-end relationships. But her confidence as an artist has now matured into a quiet assurance that makes — to name one recent example — Oberst’s 2014 album Upside Down Mountain sound all the more deadly stiff. Like Lewis, Oberst (the second-most talented member of the “Handle With Care” clan) is a pop confessionalist genuflecting at the altar of ’70s stalwarts like Jackson Browne, Joni Mitchell, and Paul Simon. But he still seems uncomfortable navigating his post-wunderkind career; his hero worship of vintage SoCal folk pop on Mountain never finds its way out of “furrowed brow” territory.

It’s hard to imagine Oberst sounding as relaxed as Lewis does on “Just One of the Guys,” a slyly profound meditation on how gender dynamics are inevitably thrown out of whack by the biological clock. It’s a deep song about Serious Real Life matters that feels as light as Lewis’s easygoing guitar strum. The rest of The Voyager is similarly constructed — billowy and compulsively listenable candy that draws blood from its lyrical razor blades. This has been Lewis’s songwriting M.O. dating back to the first Rilo Kiley record, 2001’s Take Offs and Landings. But she has never sounded as musically sweet, and as wise, as she does on The Voyager.

I’d be lying if I said that my love of The Voyager wasn’t rooted at least partly in gratitude for simply having Jenny Lewis back making Jenny Lewis records. This is Lewis’s first solo LP since 2008’s Acid Tongue, a good record composed of strong material ill-served by wan production. In 2010, she released the breezily enjoyable but largely inconsequential I’m Having Fun Now with boyfriend Johnathan Rice as the duo Jenny and Jonny. Privately, Lewis was suffering in the aftermath of two traumatic losses — her father died, and Rilo Kiley disbanded in the wake of 2007’s underrated “dark L.A.” Fleetwood Mac homage, Under the Blacklight. In recent interviews, she has talked about struggling with insomnia during this period. She coped by watching boxing and, in 2013, touring with the reunited Postal Service.

The backstory is helpful for pinpointing the strain of spiritual searching on The Voyager, which is most pronounced on the album-opening “Head Underwater” (on which Lewis sings, “I never thought I would ever be here / Looking out on my life / as if there was no there, there”) and the closing title track (where she advises, “if you wanna get to heaven / get out of this world”). But the record’s core strength is that it doesn’t seem like the product of a long deliberation. Rather, it’s a loose and wily collection of story songs. Lewis can break down tragedies with laser-focused one-liners, like summing up a callow ex in “The New You” with how he used 9/11 as an excuse to break up with her. And then she’ll pinpoint the catastrophes in trivial encounters, like the series of hilarious Hawaiian vacation fuck-ups described in “Aloha and the Three Johns,” which may or may not portend the apocalypse.

But the passage of time is felt deepest in the evolution of Lewis’s craft as a songwriter and record-maker. In both her solo work and the later Rilo Kiley records, Lewis attempted to update the L.A. yacht-rock sound of the late ’70s and early ’80s with intermittent success. With the help of producer Ryan Adams, Lewis has completely pulled it off here — it sounds like her own aesthetic now, rather than like a hip reference point. On the stunning “She’s Not Me,” Lewis sets a shimmering soft-rock melody worthy of Joni Mitchell’s Court and Spark against a bruising narrative about infidelity — even a line like “Remember the night I destroyed it all / when I told you I cheated / and you punched through the drywall” goes down like sweet tea.

If The Voyager weren’t so consistently melodic, it would be brutally depressing; if it weren’t so fearless in its lyrical honesty, it would seem ephemeral. Lewis affirms her mastery of this tricky, sweet-sour brand of musical catharsis on this album. Juxtaposing her with rock royalty no longer seems like an affectation, but natural, if not self-evident.