New NBC Comedy Preview: ‘About a Boy’ and ‘Growing Up Fisher’ Are Getting Their Olympic Moment 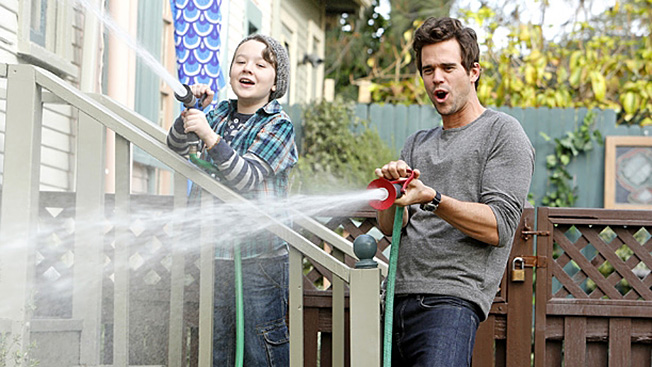 In 2014, NBC’s comedy development department is as much of an oxymoron as plastic glasses and jumbo shrimp. The oldest sitcoms on the Peacock’s air, Community and Parks and Recreation, date back to 2009, and both have survived not due to quality (though both are excellent) but thanks to a highly specific cocktail of dumb luck and catastrophic mismanagement. Quite simply: Nothing else has worked and there’s nothing on the horizon to take their place. Since taking over the network in 2011, NBC Entertainment chairman Bob Greenblatt has commissioned and canceled a lineup of turkeys rarely seen outside of a slaughterhouse in November: Whitney, 1600 Penn,  Guys With Kids, Are You There, Chelsea? And when it seemed impossible for things to get worse, it has. Just one year removed from canceling every single one of its freshman sitcoms (including such can’t-miss whiffs as Go On and The New Normal), the network is experiencing the very worst kind of déjà vu. With Welcome to the Family, Sean Saves the World, and The Michael J. Fox Show already tossed into the tire-fire of history, NBC is well on its way to scrapping its entire comedy slate yet again.

The two projects standing in the way of that dubious achievement are About a Boy and Growing Up Fisher, both of which are getting special “sneak peeks” this weekend during the Olympics. (Both will settle into their their regular Tuesday night time slots next week.) Together, the shows represent a tepid hybrid of NBC’s recent output: They’re both single-camera, in the style of NBC’s last, great decade of sitcoms, but they’ve also both been braised in the warm mush of pathos that was the hallmark of Greenblatt’s recent, mostly discredited push toward “broadness.” Neither show is particularly funny, though one is far more promising than the other. It’s as if NBC has given up on trying to make us laugh until we cry and just gone all-in on tears. Produce what you know, I guess.

About a Boy, by far the better of the new series, was adapted from Nick Hornby’s 1998 novel (and the Weitz brothers’ superior 2002 film) by Jason Katims, whose previous work for the network, Friday Night Lights and Parenthood, has been known to cause Kleenex shortages in major metropolitan areas. A few creaky cello jokes aside, Katims’s lack of straight sitcom experience isn’t so much a liability in the breathless pilot. He’s too busy attempting to condense a full-length movie into 21 minutes. The story, though rushed, remains the same: Will Freeman (David Walton) is an idle thirtysomething, living off a fortune he earned from his time in a one-hit wonder band (here, a quartet called Sriracha), and cleaving through the female population of San Francisco like a streetcar down Powell. Will’s commitment to singledom is severely challenged by his new neighbors: the annoyingly crunchy Fiona (Minnie Driver) and her goggle-eyed son Marcus (Benjamin Stockham). When Will borrows Marcus to impress Leslie Bibb’s feisty single mother — a feisty single mother named “Dakota” because this is a TV show in 2014 — heartwarming hijinks inevitably ensue.

NBC has been trying to make Walton a star for years now — Perfect Couples lasted 13 episodes in 2010; the excellent Bent should have lasted many more two years later — and Boy is the best showcase yet for his alpha-bro charm. As Fiona, a seitan-worshipping vagabond who duets with her son on acoustic One Direction covers, Driver is spunky enough, particularly in later episodes when she’s able to play more than just the scold. One of the major — and majorly unfortunate — changes from previous versions of About a Boy is the way Fiona has been downgraded from legitimately unstable to kooky. By steering away from that potential drama, Driver is forced to stand in the way of the jokes rather than participate in them. I can’t say I blame her. The first two episodes are riffs on a tune so old not even Sriracha would dare cover it: Selfish Will wants to party, but his growing attachment to Marcus keeps getting in the way. (In the second episode, the party involves a poolside charity soiree thrown by Lil Jon. In San Francisco. In the middle of the day. To quote the great man himself: OK!) You can set your watch by the life lesson that reliably arrives at the 16-minute mark.

The third episode, titled “About a Godfather,” is by far the strongest because it eases up on the premise and settles more comfortably into Katims Country. It’s a place familiar to anyone who’s ever attended a Braverman family dinner or complained about the dust in their living room while watching the fourth quarter of a Dillon Panthers game. (In fact, Parenthood and About a Boy exist in the same, emo universe with crossovers still to come.) At their best, Katims’s television shows are proudly, almost aggressively gooey. His characters reject glibness and snark and don’t deflect feelings with humor. Instead, they tackle them, with pads or without. If none of this sounds particularly suited for sitcoms, with their side-eyes and hard hearts and predilection for losers, you’re absolutely right.

But when Katims hits his sweet spot, as he does when Will attempts to bond with his best friends’ kids, it’s rarely cloying. (It helps that the best friends are played by comedians Al Madrigal and Bridemaids coauthor Annie Mumolo. Mumolo is especially funny as a woman desperate for an intimate moment alone with her husband … so they can catch up on Homeland.) There’s real pleasure to be had in the relatively innocuous sight of nice people endeavoring to be nicer. And it’s interesting to watch Katims bend the half-hour format to his needs rather than the other way around: No other showrunner alive would dare use an extended potty-training scene for anything other than a punch line. For Katims, the sight of a 3-year-old scrunching up her face on the ivory throne is as beautiful and essential as a perfectly thrown spiral. I can’t imagine everyone will find bowel movements as moving as he does, and About a Boy may never turn into a good comedy. But there’s a chance, at least, that it might mature into something worth watching. 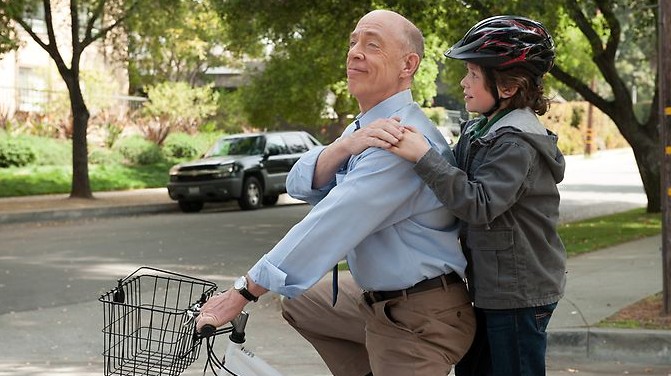 The same can’t be said of Growing Up Fisher, a disaster so explosive it’s almost worth slowing down just to rubberneck. J.K. Simmons stars as Mel Fisher, a gregarious lawyer who doesn’t let a little thing like blindness stop him from cross-examining witnesses, cutting down trees or test-driving sports cars. In fact, unless he’s directly asked, Mel doesn’t admit to his condition at all. Simmons, equally dependable in comedy and drama, is a genial, gifted performer and his commitment to playing Mel’s blindness accurately is astonishing. One can only assume it was some form of Method acting that caused Simmons to be so blind to the rest of the script.

Culled from the autobiography of series creator DJ Nash, Fisher attempts to mine the same sort of syrupy nostalgia as The Wonder Years or, more recently, The Goldbergs. Except at some point in its development, the initially ’80s-set Fisher was dragged into the present day, with its Star Wars references, Queen soundtrack, and cloying sentimentality intact. The results aren’t pretty. Fisher is the sort of throwback that isn’t worth the toss. Rather than focusing on Mel’s legal career — there are worse gags to recycle than Julia Louis-Dreyfus’s dark-glasses turn on Arrested Development — the show instead embeds itself in the wildly uninteresting life of Henry, Nash’s surrogate, a sixth grader played by Eli Baker. In the pilot, Henry’s world is upended when his parents divorce and his father attempts to embrace his blindness by adopting a guide dog named Elvis. Rather than attempt to locate a grain of emotional truth in this scenario, Nash — no Katims, he — quickly doubles down on pabulum and shenanigans. The main plot involves Henry actively competing with a dog for his father’s affection. It’s the most misguided use of species screen time since NBC’s late, not at all lamented Animal Practice.

Growing Up Fisher is the kind of nonsense show in which all the children act like adults and all the adults act like lunatics. The cherubic Henry skips school, rents a swank apartment for his pop, and wrestles with a libido that would make Will Freeman blush. His best friend is a hair-spray-addicted, Korean American proto-Poochie named Runyan who refers to himself in the third person and cracks wise about being deported. Meanwhile, as Henry’s mom, Jenna Elfman is all age-inappropriate manic panic, puffing on e-cigs, asking her son about push-up bras and treating her daughter (Ava Deluca-Verley; deserves better) like a BFF. (In the original pilot, the mom role was played by 45-year-old Parker Posey. Now that she’s been replaced by the 41-year-old Elfman, the age gap between Henry’s parents spans 199 dog years. Hollywood!) It’s hard to invest in a show’s emotion when everything about its humans seems so alien. In the second episode, there’s a conversation between mother, daughter, and mother’s inappropriate study partner about the relative hipness of the Black Keys (“I totally heart Dan Auerbach!”) that sounds as if it was written by a coolness narc who slipped into the writers’ room on a break from Jump Street.

For the most part, Growing Up Fisher is so soggy and lumpen, so intentionally inoffensive that it barely registers at all. But when it tries to warm hearts, the show demonstrates all the subtlety of a blowtorch. In the pilot, after Henry and Elvis have achieved canine détente, narrator Jason Bateman (as future Henry) drops this truth bomb: “It turns out that big ball of fur was really bringing us closer together.” Sorry, NBC. Not even the broadest comedy fan on the planet could be expected to swallow a hairball like that. There’s a difference between potty training and bullshit.