NBC Comedy Recap: The Office of the Living Dead 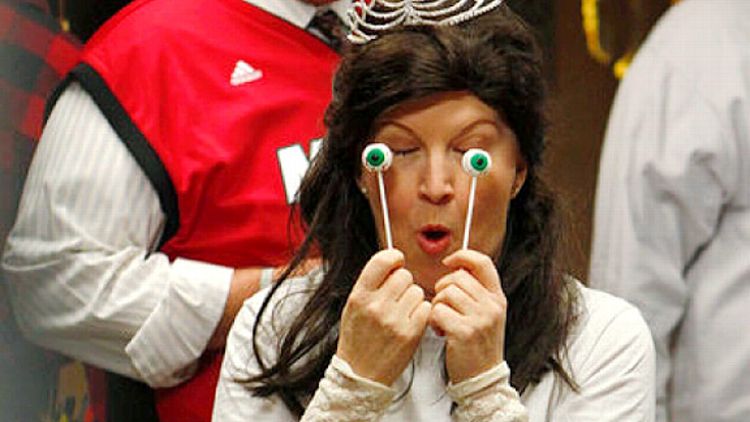 The scariest zombie on television right now isn’t one of last night’s ubiquitous Halloween costumes and it isn’t one of the cheekless flesh-munchers on The Walking Dead either. It’s The Office. For the first few weeks of the season showrunner Paul Lieberstein bravely rattled around his toolbox seemingly in search of something — anything! — that could provide a spark. But even with no new direction or purpose to point to (previous columns have discussed how change is both necessary and anathema to a sitcom in its golden years), there was a fleeting sense that The Office might be able to coast on familial familiarity — that the hook each half-hour was hung on was somehow less important than the comfortable coat being hung in the first place, its pockets still stuffed with Ryan one-liners and Toby abuse and Creed being Creed. After last night, I’m not sure.

The Office has always thrived on holiday-themed episodes if only because they provided rational context for yet another party in the conference room. Yet the vibe last night was unsettling from the get-go — perhaps not as extreme as Gabe’s backseat art films, but close. There was Meredith bragging about attending the royal wedding, Dwight dressed up as a “Jamaican zombie woman,” and an extended plotline about Jim being concerned that his wife believes in ghosts. (Honestly, just typing that last bit put me to sleep faster than a skeleton dance routine in the HR annex.) The tone was jumbled and defeatist: for every moment of Creed dressed (presumably) as Osama bin Laden there was the exhausting unreality of Creed being afraid of plastic snakes. Even veteran party planners Angela (who still fits into her kitty costume, despite the pregnancy) and Phyllis seemed bored.

In lieu of plot we yet again had unctious Andy trying (and failing) to impress his boss, Robert California, at this point less a character than a floating deus ex machina in Ray-Bans. Erin — still the show’s season-eight MVP — is in charge of planning the party, but when Robert (and Robert’s pointless, Doppler-devoted child, Bert) finds the soiree a bit too juvenile, Andy demands changes. Changes that involve misunderstandings and “pecker poker” and, ultimately, a weird, forced bit of knot-tying on Andy and Erin’s will-they-or-won’t-they-scratch-that-we-don’t-actually-care flirtation. Andy, we learn, has secretly been dating someone. Which is convenient and possibly untrue but it doesn’t actually matter because the bottom line is this: he is now the boss. She is a secretary. Unless Spader has brought along copies of some of his old movies for reference, this avenue has been shut down faster than Ryan hitting on Pam. Any potential in the relationship — which did exist at one point! — has been sacrificed on the pyre of the show’s new status quo. At a certain point we have to stop giving The Office credit for making the best of a bad situation after Steve Carell’s departure and recognizing that all of these internal hiring decisions may have, in fact, created an even worse one.

Throughout, James Spader floats through the menagerie looking fundamentally surprised to be there. He asks each cast member about their deepest fears and smugly observes the Andy/Erin confrontation with a the slightest hint of a self-aware smile on his thin lips. He’s watching The Office as much as we are, seemingly the only one with the knowledge that the melody remains familiar but the playing is all wrong. Even the sudden twist towards pathos in the episode’s final moments (“Fear plays an interesting role in our lives”) was stale and unearned. The promotion of Andy and the hiring of Robert seems to have caused problems, not addressed them: the show lacks the occasional comic jolt of Andy-as-underling, and is suffering under the uninteresting interplay of its new central power dynamic. The Office is in a bad place just now, shuffling through the motions in search of fresh blood and fresher jokes but coming up empty. And the problem, as with most zombies, starts at the head.

Community completely Britta-d the first few episodes of its third season, and not in the “making a small mistake” sense either. It wasn’t just the show’s by-now-familiar insularity that rankled, it was the relative lameness of the jokes: in the past, even when the writers seemed more interested in having the characters re-enact classic scenes than create them, the zingers were packed as tightly as the Dean into his leather devil costume. But suddenly the much-maligned (by me) show is no longer Britta-ing at all. It’s Reaganing.

“Horror Fiction in Seven Spooky Steps” was the second episode of Community in a row to portray a solitary situation from multiple points of view — and, coincidentally or not, it was almost as good as the similar “Remedial Chaos Theory.” From my (singlular) perspective, the larger problem with Community’s most ambitious past episodes — last season’s brain-devouring Halloween edition, for example — was that the situation always seemed more important than the story. At least for the present it seems showrunner Dan Harmon has changed his approach: now it’s the seven leads that are generating the situations, both literally and figuratively. It’s a big shift that reaps bigger dividends; it’s meta but also meaningful.

And so: the Britta-administered head-shrinking exams have revealed the potential presence of a sociopathic Dorito amongst the cast and only the telling of psychologically scary stories will reveal the offending chip. Abed’s version of a horror flick features erotic logic and the terrifying satisfaction of a gory death well-earned while Annie unspools a Victorian vision of Jeff as a tortured, illiterate vampire (keeping a “fine with this” Britta around as a human Capri Sun baggie). Count Winger manages to keep his fangs out of Annie’s powdered, heaving bosom long enough to string a few words together, but when his base, animal instincts prevail, Annie goes crazy CGI and devours him whole “like a gerbil tearing into a Quaker Oats Box.” Meanwhile, Fighter Pilot Troy makes lemonade out of Frankenstein’s lemons after Pierce’s (Greendale) Human (Being) Centipede experiment only makes Troy and Abed telekinetic and, ergo, “more awesome,” while Shirley becomes enraptured with the idea of forgiving her heathen, pot-spilling pals — but still leaving them to become gay-married firewood at the chainsaw-wielding hands of the apocalyptic devil-Dean. So entertaining were these demonic digressions that I almost didn’t notice that Chevy Chase actually had the best turn of all in his fetid re-imagining of himself as a silk pajama-d ladykiller capable of defending his harem from ethnic thugs demanding “brandy and hubcaps” with only his enormously “relevant” manhood.

Rare for a Halloween episode — and rare for Community in general — last night’s episode was about the people, not the costumes and it was all the better for it. Even from the blood-soaked wilds of Shirley’s New York, I’m applauding with my feet-hands.

In its fourth season, Parks has become so expert at mining the smallest of moments for laughs — Ben’s face in the Entertainment 720 offices, say, or Tom’s face on a dozen throw rugs — that it’s perhaps not altogether surprising that it faltered a bit under the creaky, over-inflated weight of a thematic episode. Halloween was that rarest of events in Pawnee – no, not salad for dinner: an off-night. Sure some good came out of April and Andy’s party: no “blood orphans” (that I could see) but Chris scored big, both with his Sherlock Holmes costume and Jerry’s comely daughter and Oren almost achieved access to Ben’s room (where the overweening orderliness might have the same effect on Indiana’s creepiest teenager as a silver bullet or a thorough shampooing). And Ben himself managed to get out some of the bottled-up passive-aggression — of the same vintage that’s kept his parents divorced for almost 36 years! — by breaking Andy’s nose with an elbow to the face. But more than a coherent episode, “Meet n Greet” felt like a shuffling of the decks — and not Erin on The Office’s dirty one, either. It was a chance for different plot pairings and character combinations. But, with the added disadvantage of too much time away from City Hall, most of the variations felt as forced as Ben’s brittle neck in Andy’s vise-like grip.

A moment of silence, especially, for sweet, beautiful, directionless Ann Perkins, here forced into random co-dependence with Ron Swanson, a man who knows more than the employees of Lowes and only maintains a single Halloween costume. Ron’s quest to fix everything in the party house — including the sad toolbox, filled with jellybeans and “a cartridge that says Sonic and Hedghog” — was noble (as was his lack of interest in whether Ann was dressed as a beanbag or an eggplant) but only served to re-enforce two things: the drywall in Andy and April’s kitchen and the fact that Ann, though pleasant, remains a story barnacle, unable to generate much plot or laughs on her own. The episode’s other narrative, Tom’s Diddy-esque dismantling of Leslie’s meeting with the Chamber of Commerce, was even more problematic. Nothing — literally nothing — in this world gives me more joy than the sight of Aziz Ansari stunting. But his behavior seemed wildly out of wack, even if bankruptcy (not to mention Jean-Ralphio’s tears) had driven him to such willful douchebaggery. Embarrassed in front of the Nipple King, Leslie was fully within her rights to go full Van Alden on her former assistant, leaving him chastened and, even worse, all pruney.

Parks & Recreation, like Pawnee, is made wonderful by the strangeness of its citizens. So one weak week shouldn’t have too much effect on civic pride. We’ll miss Entertainment 720 (“a fixture of this community since June”) but not nearly as much as the costume department will. Rest easy, leopard-print slippers. You’ve earned it.

Here’s what I realized last night: Whitney isn’t a sitcom. It’s a procedural. Like Law & Order or, say, Kitchen Nightmares, every week presents familiar characters struggling within the genre-dictated confines of yet another ridiculous conflict. Sure, big questions remain, like who thought an entire series could be built out of the miserable hate-flirting of an unlikable couple? And who convinced Ken Marino his competence wouldn’t be wasted when placed in the middle of it as he was last night? But at least the ironically titled (in terms of quality, at least) “The Wire” — in which Whitney has the crude cop/friend (who has my vote for the most odious fictional television character since Heidi Montag) put a surveillance camera in her home in order to catch her boyfriend using an unpleasant tone — provided peace of mind. Understanding that every episode will feature some kind of disagreeable relationship role-play in lieu of actually recognizable human behavior is, in its own small way, as comforting as knowing that every episode of CSI: Miami is, at heart, about the interplay between a man and his sunglasses. And so, here are some future plotlines offered up to the producers of Whitney free of charge:

Jay-Z Songs He Doesn't Want His Daughter To Hear