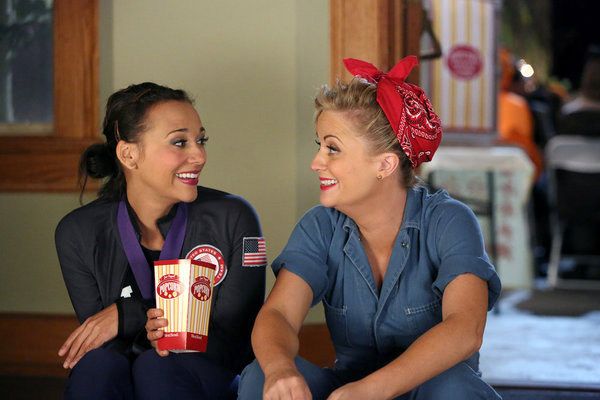 Last week, I led this piece by suggesting that “all great comedies are at least a little bit serious.” Now, I’d like to take it one step further: Sometimes the best parts of comedies are the moments that aren’t funny at all. The trend in modern sitcoms is to speed everything up: more jokes, more references, less time to catch your breath. But the old-fashioned Parks has always appreciated the value of the slow build, the pause, the very human need to inhale oxygen before LOL-ing it out with glee. As Claude Debussy — himself a huge fan of Cheers — once put it: “Music is the space between the notes.”

“Halloween Surprise” wasn’t the funniest episode of Parks and Rec; it’d be very hard to argue that it was even in the top 10. But the script, written by showrunner Mike Schur, perfectly captured the artful, downright Debussy-ian care that goes into the construction of this gently wonderful show. Unlike the brittle and vicious Up All Night, Parks operates from a more humanist position, a bedrock belief that people are ridiculous and hilarious but ultimately worthwhile. Even in cartoonishly wacky Pawnee, hell isn’t being surrounded by others, it’s being alone. And so everything on offer last night was, at heart, a paean to togetherness: Donna’s remarkably familiar live-tweeting of a movie to her legion of followers, Chris’s eager over-sharing of his psychotherapeutic accomplishments, Ron’s grudging acceptance of Diane’s children as something potentially worth as much of his time as a well-made table. With his improvised swag-rental service, callow Tom found a way to share his inherent jigginess with an entire community of “teens, tweens, and in-betweens.” Not even Jerry’s devastating fart attack could keep his friends from his side (although they did their best to avert their noses).

And then there was Ben and Leslie. Schur proved back in his Office days that he knew better than to soap-operatically meddle with a sure thing: Once Jim and Pam started snogging, there was no going back. And so last night brought Parks’ politically entangled nerdbirds to a similar nesting place. Ben was tempted by a Floridian shark and Leslie flirted with genuine sadness (nothing could be worse than a hopeless life in which you lose your rental deposit and gain nothing but an empty, Jell-O-fueled, Jerry-like existence). But Parks and Rec’s emotional reality provides the necessary space between the laughs; it’s the key to all the comedy. The proposal scene in the empty, wood-paneled living room was beautifully simple and close to perfect. Type-A Leslie was finally rendered speechless, allowed to enjoy a beat in the perfect present rather than fixating on all the idea-binders still to come.

A moment here to talk about Amy Poehler: Her performance in this brief scene was astonishing. A few weeks ago I raved about Connie Britton’s effortless grace on Nashville, how every moment she’s on-screen she’s 100 percent alive. Though she’s usually (rightly!) praised for her fearless comedy chops, the same could be said of Poehler. There’s a bravery and vulnerability to her level of constant commitment, whether she’s cracking up while auctioning off her best friend’s body or breaking down while accepting a marriage proposal. Watching her in the final scene last night — and how could anyone watch anything but her — I was reminded of the improviser’s code: that when you agree to go onstage without a script (or a net), the one word you must always have on your lips is “yes.” Amy Poehler brings that fearless positivity to everything she does. As demonstrated last night, it’s more than the definition of good comedic acting. It’s just good acting.

As your standard-issue, New Yorker–subscribing, tree-worshiping, Leonard Nimoy–appreciating coastal liberal elite, it’d be safe to assume that I was the target audience for “Unwindulax.” After all, I know nothing of the real America, awash with truck races, swamp parties, and mall fires. I have seen a crab with my own eyes. If left alone at Lambeau Field for more than five minutes, odds are good I might accidentally burn it to the ground. Not even my real and abiding affection for shrimp outweighs my admiration for steroid aficionado Michelle Obama.

But last night’s 30 Rock was a super PAC I just couldn’t bring myself to join. The jokes were uniformly excellent — particularly the one about Ed Begley Jr.’s car sail and anything involving the “black Transformer” jazz. And Gary Cole is comedy gold, whether he’s sipping on a Times Square mai tai or a lukewarm mug of office coffee. But the ginned-up political frenzy seemed labored this time out, the gags about Mitt Romney hunting humans as low-hanging and easy as Liz’s desire to see teachers paid the reasonable wage of $1 million a year. I would have been happier to see writer Matt Hubbard focus his zings and arrows a bit more; watching Liz throw tampons at ridiculous gender politics (as IRL Liz did just the other day) is infinitely more interesting than seeing Jack Donaghy throw Monaco-like amounts of money at Don Cheadle. In a world of “forcible rape” and Donald Trump, satire this broad pales in comparison to the real thing.

Is it possible that this season’s relatively promising first two episodes were nothing but a (sorry, Angela) dead cat bounce? Because “Here Comes Treble” was shockingly lifeless, an inert pile of half-hearted gags and limp execution. Nearly everything here felt distracted: Rainn Wilson doing his best to humanize Dwight in anticipation of his own show (though not even the tossed-off reference to his stress-inducing extended family could forgive the sight of a grown man smearing peanut butter on his face because of someone else’s meds), Craig Robinson, and Brian Baumgartner biding their time until they’re sprung to work on their own. Even Stephen Colbert’s witty performance as the infamous Broccoli Rob was phoned in — literally, as he awkwardly appeared via Skype from what had to have been his New York studio. The only Halloween story line to draw blood was Jim and Pam’s: His seemingly unnecessary investment of $10,000 with his sports-marketing brosephs (one of whom looked suspiciously like Office producer and noted NBC-ruiner Ben Silverman) brought Pam’s simmering resentments to a full boil. But in such an overcrowded stew, there’s simply no room for her recognizable emotions. She’d be better served sticking her head in a pumpkin like the rest of her co-workers and waiting for the finale.

Serious question: Are there any jokes on Up All Night that don’t come at the expense of others? From Tanlines-grooving hipsters to nosy neighbors, no one escapes the judgey laser vision of Ava and the Brinkleys unscathed. Yet rather than spend another week harping on this show’s off-putting POV, I’d rather celebrate one of its inventions. Really! For as much as I’m unable to stomach Reagan’s sour neediness — which managed to ruin a perfectly good Gob–Buster Bluth family reunion — I have to give her credit for her DIY sniglet game. You can have your Yeasayer gags and iMovie groaners; for me “donesauce” is the perfect summation of my relationship with this show. Thanks, Reagan!