NBC Comedy Recap: Community Fails to Make Us Want to Smother It With a Pillow 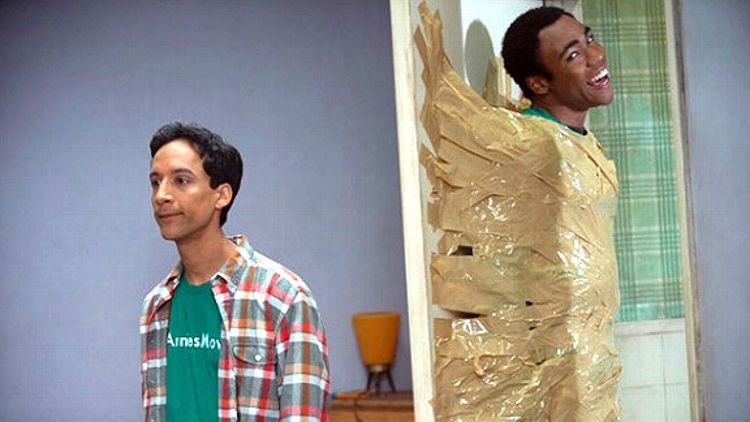 1. Community
It is a truth universally acknowledged that moving absolutely blows. But there were two truer truths in last night’s episode of Community, and the wise-when-not-shrill Britta struck upon the first of them. As Annie prepared to escape the “cracksmith” Spaghetti by shacking up with Abed and Troy, she cautioned: “The things you love about them will be the things that make you want to smother them with a pillow.” In the end, our most beloved friends and lovers will, with their very them-ness, work our every last nerve, which is a fate that sitcom characters in particular cannot escape. As it happens, Greendale Community’s finest are still enjoying a honeymoon period.

Naturally, Britta has a friend who fell out of Anne Frank’s house in Amsterdam after taking a bunch of mushrooms, which is her way of advising Annie to loosen up. She’s a great character, and it’s by comparison that Annie, and occasionally Shirley, seem more interesting. When Britta and Shirley believably squared off over a hitchhiker — Britta having questioned the sincerity of her friend’s Good Samaritan spirit — each learned her lesson: Christian or atheist, Jesus is only good in specific, historic doses. The real-life marijuana-peddler doesn’t cut the mustard seed.

Per Britta’s prediction, Annie’s relentless optimism was put to the test when her new housemates relegated her to a pillow fort, preserving their spare room as a holodeck they had christened the Dreamatorium. Her indignation provided the episode’s second truism: “Why am I always the one who has to adapt?” It’s the person that tries the hardest who will inevitably have to try even harder, while the person who doesn’t try at all gets to go shopping — although Jeff’s deception is splendidly punished by a forced rendition of “Kiss From a Rose” (flower foreplay at its finest).

Still, neither Seal’s lyrical obtuseness, nor the hallucinatory experience of the Dean’s karaoke indulgence, rivaled the whip-smart weirdness of “Remedial Chaos Theory.” But when Annie finally arrived in her virginally decorated room, there was a sentimental bent to the gathering. The people whom you want to smother are often the ones who know you the best, and it’s this impulse toward camaraderie that keeps each of these shows vital (except Whitney, which should have been dead on arrival).

2. Parks and Recreation
The only reason the always-superior Parks and Rec files in behind Community is that the storyline felt, however coincidentally, recycled from the latter’s recent foray into similar territory. Last week, Leslie struggled with her feelings for her ex, Ben. This week, their issues were aired at a model UN summit. Demark (Leslie) couldn’t tolerate Peru’s (Ben’s) independence, established during a belabored photo op, and so war was pretend-waged. Was this a larger commentary on the personal whimsy that dictates foreign policy?

No, of course not, and if it was, it would be as dangerous an indictment of female empowerment as any PMS joke you can think of. Leslie, crestfallen at the idea of not being friends with someone she “shared [her] flags with,” couldn’t keep her emotions in check, which is how she ended up making this vitriolic riposte to Ben’s peace offering: “The only thing I will be waving is your decapitated head on a stick in front of your weeping mother.” Chris Pratt’s “yikes” face said it all. Poehler’s wildly earnest civil servant would never normally order Switzerland to “nut up” or bang her shoe, Khrushchev-style, against the podium. But she would agree that there are no small parts, so a line like, “As they say in Denmark, ‘I’m back’ — most people speak English there” was as endearing as April’s commitment to playing Denmark’s ally, the moon.

In any case, Leslie’s behavior made more sense than Ann and Chris’s come-to-Jesus moment regarding his new relationship with Millicent. Poor Rashida Jones just doesn’t have enough material to keep her character entirely relevant, and Rob Lowe’s cyborgian energy is better off on its own, even if she did rightly expose his oppressive fitness fanaticism. Of last night’s subplots, it was really Keith, Tom’s skittish potential replacement, that got the most laughs and for no reason other than that the actor (UCB’s Kyle Mooney) did skittish so well. Still, welcome back, Tom — it was as if you never left.

3. The Office
Maybe it’s time to talk about Ed Helms. Does he scour every script looking for opportunities to spoof his clearly sincere musical prowess? It’s said that in order to be truly happy, one must be susceptible to illusions — and Helms’ illusion includes thinking that his corny musical numbers are consistently funny. Last week’s opening was a tepid “Closing Time” gimmick), but this week an entire subplot was wasted on Robert California’s hogging Kevin and the Zits’ studio space.

Pam, on the other hand, found herself wary of illusion — in this case, the illusion that Jim has eyes for only her. She interpreted his friendliness with the temp as an appraisal of her swollen, pregnant, desexualized body. While the rest of her coworkers casually placed their hands on her belly, she drifted toward Dwight, knowing that his social gracelessness would prevent him from mollycoddling her with talk of Helen Mirren’s hotness.

Though the Dwight/Pam/Jim triangle should have grown stale by now, this was a new and plausible development. Pam and Dwight’s sympathetic connection has been established before, most recently in “Doomsday,” and his hysterical attempts to feel for Jim’s possible boner came across as an oddly noble gesture — and a not-terrible idea. In the end, it was touching to watch her waddle out of the drugstore worrying about Jim’s blood pressure, though at the risk of sounding cranky, it’s also disappointing to see their marital bliss go so easily unchallenged.

4. Whitney
Then there’s Whitney, where domesticity is constantly challenged. Almost every episode revolves around arguments with her boyfriend that she never appears invested in, a la last night’s tempest-in-a-teacup over his poker-playing past. Nattering at him is a good excuse for her to show off, and it’s with a mix of wonderment and disgust that I keep watching.

Cringing at comedy can be a great thing, like during the original version of The Office, for instance, or those scenes from Louie in which he masturbates in a woman’s bathroom. But when the discomfort is unintentional — Cummings has no idea how embarrassed I am for her — it’s enough to make a person squirm. Both Whitney and 2 Broke Girls, which she cocreated, are so smug in their brassiness that you can almost picture Cummings or her avatar Kat Dennings snapping their necks after ever sarcastic zing like they are personally responsible for blowing to pieces the notion that girls need to be polite. What’s unfortunate is that Cummings isn’t actually doing anything for “women in comedy” — one scene last night actually allowed her multiple opportunities to make a joke about little blue racquet balls and she came up empty.

Cue the racist humor, which is a bigger draw on Girls, but snuck in last night when Whitney’s friend Lil wore a bindi on her forehead to appease her Indian mother-in-law. Whitney: “So you put a tiny bike reflector on your face?” The throwback to the era of live studio audiences is one thing, but humor evolves with the times. There’s no subtext here, Cummings is merely appealing to the lowest common denominator. Okay, she knows how to throw powder in the air like LeBron James — hell, she’s not a bad basketball player — but her irritating self-satisfaction ruins the slim chance of ever finding her appealing. What you dislike about her in the beginning is what you will hate about her in the end.