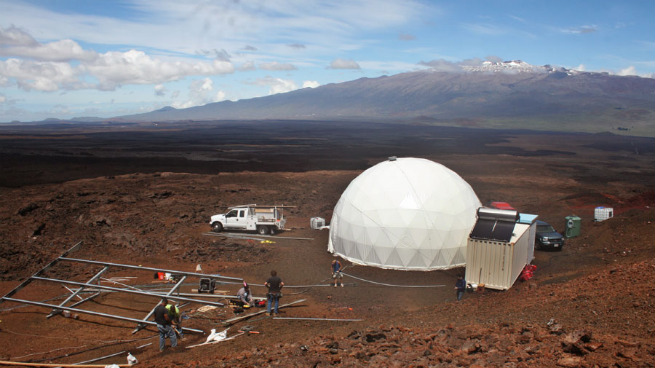 Last week, the details of NASA’s Hawaii Space Exploration Analog and Simulation Mission, or HI-SEAS, were released: Three men and three women were chosen from a pool of 700 people willing to be cooped up together for four months in a sealed dome on Hawaii’s Big Island (the volcanic habitat of Mauna Loa, according to a HI-SEAS official, is “like a young Mars”), where emails are delayed 20 minutes and showers will be limited to eight minutes per person per week. If they leave the dome, they must wear space suits. HI-SEAS performed its first experiment last year, which included eight participants and focused in part on “food monotony.” (Recipes were crowd-sourced; Spam features prominently among the winning dishes, because in addition to the volcanic soil, Hawaii and Mars share an affinity for shelf-stable meat.) Longer studies — one eight months, one a full year — are also in the works.

With dinner settled, the new mission — which began two weeks ago — seeks insight into the psychological effects of long-term space travel (like “third-quarter syndrome,” the mental fatigue astronauts face as they near the end of their journeys). The crew, who all have science backgrounds, will keep busy with research projects (like 3-D printing medicine), but they’ll also be under constant monitoring to track “group cohesion and a wide range of cognitive, social and emotional factors” to help choose and prepare future astronauts. Though principal investigator Kim Binsted has said that the research team has received a number of requests from producers who want to film life inside the dome, they are “not ethically allowed to subject [the] crew to that kind of thing.” It’s a great reality show pitch that will never air, and that is for the best.

As a mission to Mars becomes more likely in the nearish future, the psychological and emotional well-being of the people embarking on the long journey (two to three years) becomes more of a concern, and future astronauts could be outfitted with “psychosocial sensing badge[s]” that monitor stress levels (and even offer advice to squash tensions between crew members), as well as self-help software. (Hmmm.)

Obviously being in space presents plenty of challenges for the psyche, and those challenges are easily adaptable for a competitive format, but the psychological testing of earthbound astronauts also lends itself well to artistic riffing: That was the plot of the pilot episode of The Twilight Zone, “Where Is Everybody?” presented in full below after a preamble by Rod Serling (just to remind you that Serling always referred to robots as “robitts”):

The episode follows Mike Ferris, astronaut in training, as he navigates his way through an abandoned village, growing increasingly paranoid. (SPOILER ALERT: It’s all a hallucination.) One of the most disconcerting things about this episode was that everywhere Ferris went was so recently deserted — there were signs of human life everywhere, but no bodies to be found — and we spend most of the half hour episode experiencing his isolation and disorientation.

Serling defined science fiction as “the improbable made possible,” unlike fantasy, which is “the impossible made probable.” Unlike Mike, HI-SEAS’s analog astronauts would, of course, have each other and wouldn’t be stuck in solitary chambers, but their mission is much longer and they’ll have social dynamics to contend with. Things like the HI-SEAS experiment bridge the gap between science and fiction, placing six people in a space-themed diorama to see what it will do to their brains. It’s a false reality, a projection of something we’ve imagined for a long time but that has never happened before.

Hopefully the HI-SEAS folks will bond for four months, eating freeze-dried hunks of yogurt and playing bridge with dirty hair, but the experiments will only grow longer and more intense, and then one day we won’t be in Hawaii anymore, Toto. We’re in a brief what-if period, the best time for finishing the end of the sentence begun by scientific research. Stretching a person’s psychological capacities for purposes other than ratings is dangerous yet un-skeevy; it engages the imagination, but in the end it has something real and practical to say about our own minds under pressure.